Accessibility links
Review: 'The Good Place' Reaches A Satisfying End The NBC afterlife comedy ended Thursday after four seasons, and it did so in a rich, emotionally satisfying, provocative fashion.

A Goodbye To 'The Good Place'

A Goodbye To 'The Good Place' 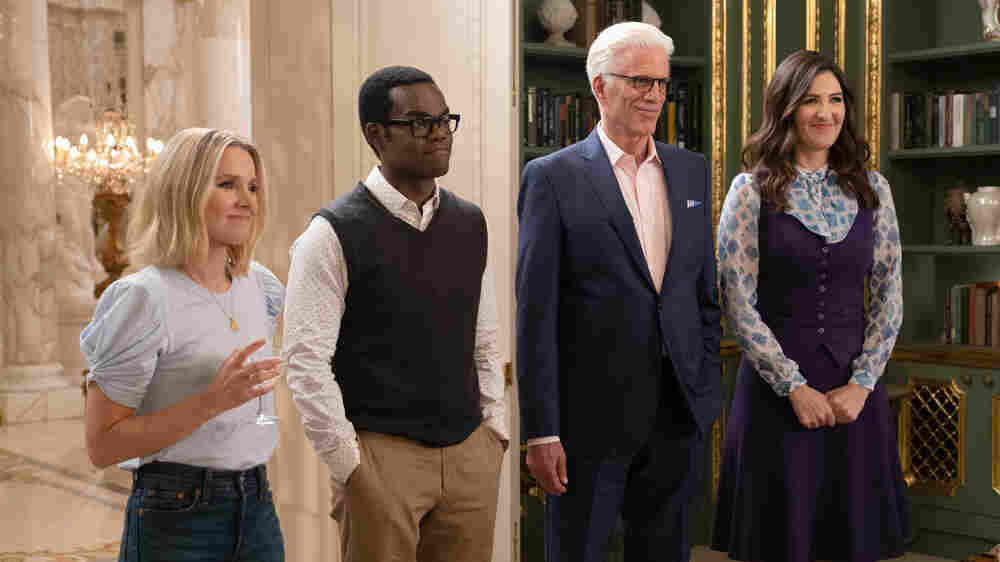 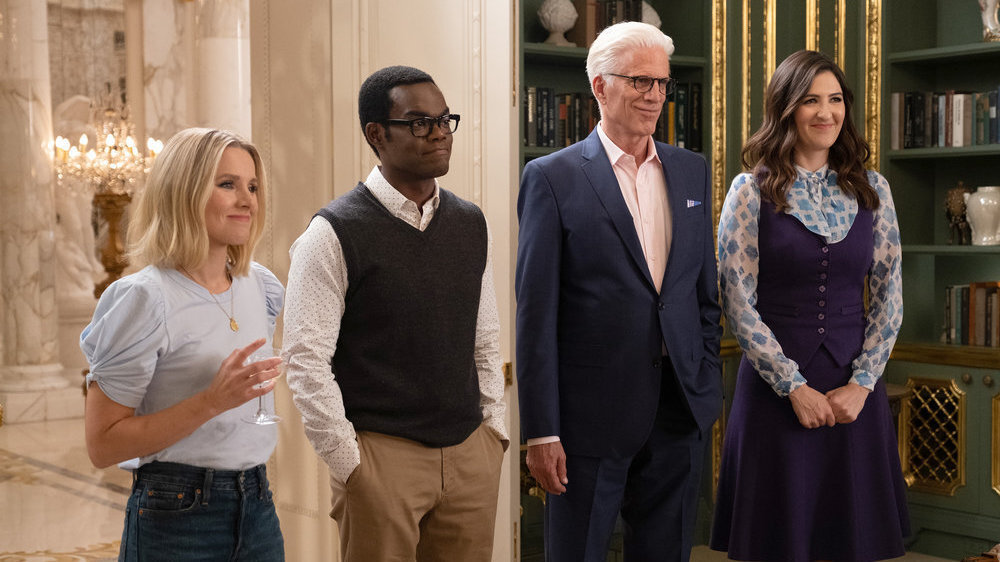 Endings are sad, but without them, nothing matters.

That was only one of the lessons of the thoughtful, emotional finale of NBC's The Good Place, which itself ended after four seasons and only 52 episodes. But, as the show itself stressed in its last couple of installments, heaven is not continuing forever: It's leaving at the right time, when you've done your work. When you're ready.

Creator Michael Schur, who also was behind Parks & Recreation, has a kind of grudging, aggravated optimism that echoes in a lot of his work. The Good Place was full of reminders of how petty and nasty people can be when they're not specifically trying to discipline their worst instincts. It was also emphatic about the fact that it's almost impossible to successfully weave your way through the complicated world of trying to be decent, given the way our current systems of commerce and government work. Similarly, the people we knew in Pawnee, Ind., were constantly besieged by smallness and disappointment — remember how Leslie Knope's beautiful dream of elected office ended the first time.

But The Good Place, like Parks, became a show about the fact that even given those setbacks and disappointments, people can be good, can do good, can grant each other grace. And more than Parks, The Good Place became a playfully direct and explicit exploration of that idea.

Earlier on, the show was more about Eleanor, a self-proclaimed dirtbag in life trying in the afterlife to become good through concerted effort, with the help of her friends: Chidi, her teacher; Tahani, her nemesis-turned-friend; Jason, the Floridian dingdong DJ she adored; Janet, who is not a girl or a robot; and Michael, her tormentor-turned-ally. She learned to sacrifice, to tell the truth, to be better, to persevere. And she became a leader. She learned to step in when no one knew what to do.

This season, though — especially the last few episodes — seemed less about learning what it means to be good, which all of our friends on the show already were, and more about accepting what it means to be human. Longstanding notions of heaven, on which Schur and his extraordinary writers were riffing throughout the series, have a very particular weirdness to them that I think was ultimately too much for that limited, humanist, often frustrated optimism to swallow: that paradise is doing whatever you want, forever.

One problem with a traditional heaven (pardon me while I critique ancient notions of the afterlife; it's that kind of television show) is that while it works well as a reward, as a carrot to dangle as the payoff for being good while on earth, it is so far removed from human experience that it doesn't say very much about humanity. It's a very flat, all-the-flavors-of-ice-cream, I-want-a-pony notion of heaven. But when we long for happiness on earth, is it for that? Is it because we want all the flavors of ice cream and a pony? Doing whatever we want forever?

In the penultimate episode, "Patty," the group reached the real Good Place, where they learned that, indeed, it's fun to do whatever you want. But they also learned that a frictionless existence is meaningless. They learned, as the show explicitly stated in the finale via a cameo from the philosophy professor Todd May, that mortality gives meaning to human life, so some kind of ending is necessary to make even the afterlife a place of true happiness. To be human is to know you are not forever; to know you are forever is to lose your humanity. Thus, Eleanor and friends developed a system in which even people in heaven could decide that the time had come for it to be over. Again: Heaven is not never leaving; it's leaving at the right time, when the work is done.

Jason was the first to realize, after playing a perfect game of Madden with his father, Donkey Doug, that he was ready to go. He said goodbye to Janet, coming to terms with the deeply relatable fear that he'd be forgotten, and he went into the redwoods where the show put its last door. And then, in true Jason fashion, he just kind of hung around, chilling, waiting for one last chance to see Janet. Like a monk, she pointed out. He didn't get it.

William Jackson Harper: Getting To The Good Place

Tahani went a different direction. Like the party planner she always was, Tahani decided to become an architect, designing entire afterlives in her peacock bow tie. She likes to plan, she likes to design, she likes to do for others — and now, she figured out how to do it from a place of generosity (as well as, sure, a desire to continue to get credit for her great ideas; she's only post-human, after all).

And then Chidi. Eleanor's selfishness was now translated through love, and she tried to tempt him to stay with trips to Athens and Paris, asking him over and over to tell her all about philosophy again. He was willing to stay for her, but inevitably, because he had taught her well, she realized — and explained very clearly, in specific language of moral philosophy — that this was selfish of her, and that she had to let him go. So she did.

If there was a part of the finale I didn't quite think resonated, it was the visit to Mindy St. Claire to persuade her to go through the system and attempt to qualify for the Good Place. I've always found the idea of the Medium Place very funny, and Maribeth Monroe is always marvelous in the role. But here, the idea that this was part of Eleanor's final work that needed to be done didn't quite seem of a piece with the rest of the finale, even if her explanation that Mindy was the person she might have been if she hadn't met her friends was very sweet.

What did seem spot-on was that Eleanor couldn't leave until she saw to Michael. One of the show's best swerves has been its reversal of the relationship between Michael and Eleanor from one where he was like a benevolent father to one where he is more like her well-meaning but disoriented teenage son. And Michael had the same problem that all of Eleanor's friends had in the afterlife when they first got to the Good Place: he had no end in sight. He wasn't even able to walk through the door, as he learned in the finale's funniest sequence, in which Michael discovered that he didn't disappear after passing through, even if he tried to hide behind a tree to make it seem like he did. (If all this show had done was bring out this dopey, broad part of Ted Danson's comedic talent, it would have been worth it.)

No, Michael needed a chance to be human. Human, with all the annoyances and limitations and — this was perhaps what was stressed the most — uncertainty that humanity brings. And, granted his humanity, he delighted in burning his hands on a microwave dinner and playing with his giant dog (named Jason) and all the dumb, ordinary things he had never gotten to experience.

And then Eleanor could pass through the door, completing the journey she took when she died after being hit by some grocery carts ... and then a truck. She began as a fraud, or so she believed, and ended up saving the world. She learned humanity from a bunch of very flawed people, none of whom understood it perfectly themselves.

What a weird, often extremely goofy, ultimately very profound 52 episodes those were. Not everything worked: I don't think the new humans introduced this season as test cases ever clicked at all, despite good performances from the actors. At times, the systems of demons and trains and places and tests became so convoluted that I gave up, and I still probably couldn't ace a test on exactly what happened in some of those systems.

But I understood its final philosophical stance perfectly. Fragility and preciousness are not paired out of some regrettable irony; they are reliant on each other. It's because we know our time with people will end that we can find ourselves flooded with gratitude for their presence. The friction of our limitations is what necessitates effort (of all kinds), and effort — rewarded and not — is where we find meaning. Surround yourself with friends who love you and love them deeply, and you will grow. It's worth applying every part of yourself, including your intellect, to the question of how to do the right thing.

There was so much in this series to admire: outstanding performances from the core cast and tons of guests, wonderful writing, weird jokes (Knish From A Rose 4-ever), a positively divine official podcast, glorious production design, inventive visual effects and, yes, the decision to exit when it was time. Maybe too early. Maybe. But isn't that the way it goes?

Schur has talked about the fact that after the end of Parks, NBC was willing to try just about anything he wanted to make. So naturally, he made a philosophical comedy about decency that regularly quoted philosophers, took strong positions on frozen yogurt (suitable only for a fake heaven), pulled off some remarkable surprises and packed a year of sobbing into a 75-minute finale.

Humanity is beautiful and weird and frustrating, and joy and loss are twins. That's a lot to get out of a show that also taught me to yell "BORTLES!" when I'm trying to get out of trouble.