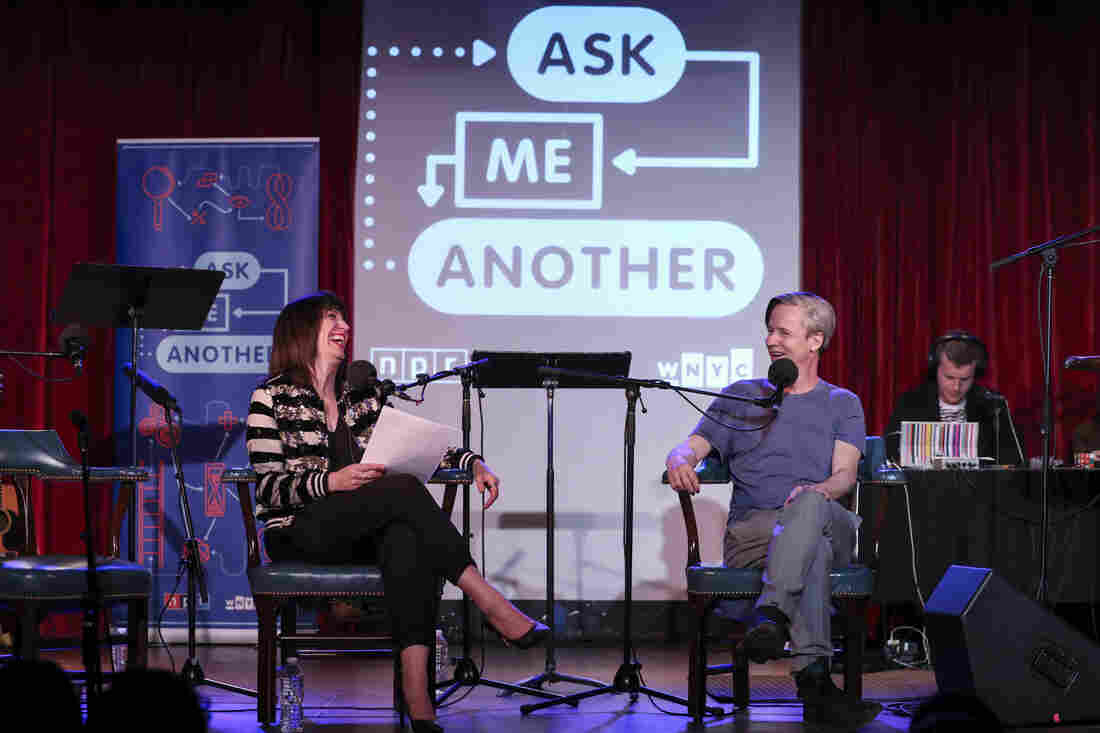 If there's any reaction that John Cameron Mitchell doesn't want, it's "meh." Since the 1998 Off-Broadway premiere of his glam rock-inspired musical, Hedwig and the Angry Inch, Mitchell has spent his career creating stories that aim for the new and original. The musical, adapted into a film in 2001, follows a transgender rockstar as she travels across the country with her glam and punk band, The Angry Inch. John Cameron Mitchell appears on Ask Me Another at the Bell House in Brooklyn, New York. Mike Katzif/NPR hide caption John Cameron Mitchell appears on Ask Me Another at the Bell House in Brooklyn, New York.

Among Mitchell's recent projects is Anthem: Homunculus, a ten episode-long rock opera co-starring Mitchell and a who's who of big names, such as Patti LuPone and Glenn Close. Something of a spiritual successor to Hedwig, it portrays a struggling artist living in Kansas, who is broadcasting a live telethon to fund his cancer treatment. Mitchell can also be seen in the Hulu original series Shrill, where he plays Gabe, an egomaniacal boss at a Portland alt-weekly alongside Saturday Night Live's Aidy Bryant.

In a conversation with NPR's Ask Me Another host Ophira Eisenberg at the Bell House in Brooklyn, New York, Mitchell discusses the enduring legacy of Hedwig and the Angry Inch, writing Anthem: Homunculus, and what it's like playing a nightmarish boss in Shrill.

Then, Mitchell plays a game called "We're Going to Make You Sing. Inspired by the music from his 1970's-channeling musical Hedwig and the Angry Inch, Mitchell guesses the titles of 1970s glam and punk rock songs based on their lyrics.

John Cameron Mitchell On Punks, Aliens And The Queerness Of 'How To Talk To Girls'

On Hedwig and the Angry Inch's legacy:

"We were too weird to be up for an Oscar, or even make money at that time. We always try to do something new — which means, no money. But the people who like it care about it more. It's the old thing: 'I'd rather be ten people's favorite thing of all time that changes their life than a million people's meh thing.' It's really cool when a new generation finds it."

"I lived near [William S. Burroughs's estate] but never could get to Lawrence, which was the 'cool town' in Kansas. So I'm on my way to my 35th high school reunion, and I knocked on William Burroughs's door and the caretaker... was like, 'What?' and I'm like, 'I'm writing a musical that might take place on this porch.' He's like, 'Okay, that's a new one. Come on in.' Then [I] met Burroughs's partner, James Grauerholz, who invited Bryan Weller, my composer, and I to write the first draft. Bryan wrote the music in the living room and I was in the garden writing the script. It was so cool."

"I did meet David Bowie once. He came to [Hedwig and the Angry Inch] and, thank God I didn't know he was there. I met him later when he was rehearsing, my boyfriend worked at his rehearsal studio. He swiveled his lighthouse smile towards me and was like, 'John. You got it right.' I'm not alive right now."