Accessibility links
Review: 'The Other People,' By C.J. Tudor C.J. Tudor's latest follows a man obsessed with proving his young daughter — supposedly killed in an accident — is still alive. It's atmospheric, but slightly shakier than Tudor's past books.

Coincidence Distracts From The Creeps In 'The Other People'

Coincidence Distracts From The Creeps In 'The Other People' 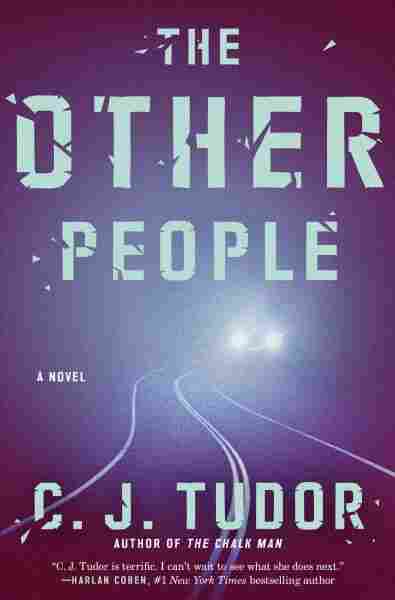 C.J. Tudor's novels The Chalk Man and The Hiding Place broke her out in the American market, establishing Tudor as a first-rate thriller talent whose slow-burning plots balanced creepy atmosphere with menacing motive. Unfortunately, her third book, The Other People, falls short of the standard she set with the first two.

Does that mean it's not worth your time? The answer depends on your reading time. If it's severely limited, you might want to wait for Tudor's next book, because she's such a strong and original writer that she'll return to form for sure. But if you have the time to read everything you like, The Other People will delight you with the same creepy atmosphere you expect, set within a slightly shakier plot.

For "shakier" you might read "too much coincidence" and yes, mystery and thriller plots often rely on coincidence — otherwise, what would keep the engine running? Characters discover heretofore hidden information, car crashes happen at precisely the strangest moment, weapons turn up after seasonal rains. But in The Other People we can see too many of the marionette strings Tudor has in play.

As the book opens, Gabe Forman sees his beloved five-year-old daughter Izzy crying out through the back window of a car in front of his on the M1 motorway. That would be traumatic in any circumstances, but as Gabe soon finds out that Izzy was killed with her mother, Jenny, in their home, it's traumatic and shocking. Readers won't understand until close to the story's end why this sighting of the little girl is such a coincidence, but when they do, they'll either accept it, or throw the book against the wall. (The book's slim paranormal element will seem less irritating, afterward.)

... if you have the time to read everything you like, 'The Other People' will delight you with the same creepy atmosphere you expect, set within a slightly shakier plot.

Fast forward several years, and Gabe has become a kind of wraith, traveling up and down the M1 in a bedraggled camper, hoping for a glimpse of or more information about Izzy, whom he now believes to be alive. In these sections Tudor's fans will find much to love; the author brews a weary, authentically spooky world from the nighttime hours Gabe wiles away at travel-stop restaurants. He meets an even spookier man who calls himself "The Samaritan," who leads Gabe to a submerged car containing lots of clues — but no child's body. Could Gabe be right about his daughter?

Meanwhile, a woman named Fran and her daughter Alice also travel by night, on the run from some unspecified threat. Complicating matters is Alice's unpredictable narcolepsy, in which she not only falls asleep, but experiences visions of another little girl who has a message for her. Both Fran and Gabe are connected to a site on the dark web called The Other People that helps victims of tragedy find the resolutions they want.

Whether or not readers have also picked up 2019's The Chain by Adrian McKinty, they'll recognize that some kind of tit-for-tat is involved, a sinister kind. Without giving anything away, the sinister action here is different, and so are the reactions of those involved. In this books, the small moments and encounters between characters and "members" of The Other People feel the most chilling, because anyone willing to take the risks involved (like an elderly woman masquerading as a shopkeeper) must be at the edge of despair. At more than one point while reading, a person might be tempted to access the dark web and see if groups like this exist. Although who knows what might happen once they've got your data? Shudder.

Meanwhile, in another turgid coincidence, a kindly server at Gabe's preferred travel stop turns out to be connected to Fran and, well, you know, everything races along to its conclusion, which includes a strange stately home that may or may not have something to do with that aforementioned paranormal element. What will keep readers engaged is the menace of the titular conceit and the authenticity of Gabe Forman's grief, easily recognized even by those who not experienced such hellacious loss. "Gabe didn't believe that 'things happened for a reason.' People tried to make sense of tragedy, when the point of tragedy was that it was senseless. Bad things didn't happen for a greater reason. They just happened."

Even when people deranged by tragedy attempt to give it meaning, the nature of it defies rational thought. That's what makes it senseless. Perhaps C. J. Tudor's problem, in The Other People, lies in trying to fit a grief to a plot instead of the other way around.