Accessibility links
'A Woman Like Her' Looks At Murder Of Pakistan Social Media Star Qandeel Baloch By Her Brother Qandeel Baloch's brother went to jail in 2019 after murdering his sister in an "honor killing" in 2016. Author Sanam Maher discusses how this case has changed Pakistan. 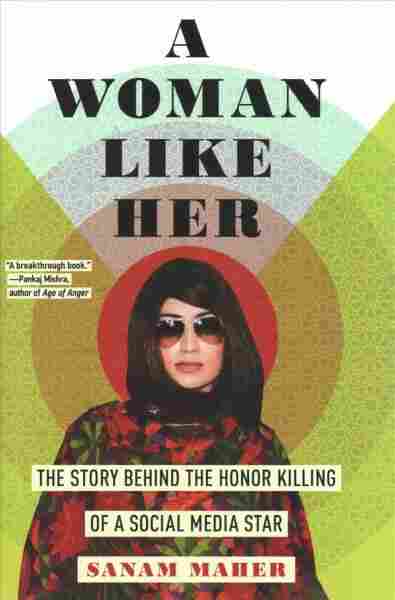 The Story Behind the Honor Killing of a Social Media Star

In 2016, Pakistani social media star Qandeel Baloch was killed by her brother.

The ambitious, beautiful, daring young woman's posts online were often sexy or — for many in Pakistan, including some in her own large family — even scandalous.

But Baloch's fame could not protect her from a tragic end: One of her brothers murdered her in what's known as an honor killing. She was just 26. Though, in an unusual twist in a country where honor killings generally go unpunished, her brother did go to jail.

Journalist Sanam Maher, who has written a book about Baloch (whose real name was Fauzia Azeem) called A Woman Like Her, spoke with NPR about the star and the aftermath of her death.

Qandeel was one of the first social media celebrities that we had in Pakistan. She became famous for the videos that she would post online to platforms like Facebook, Instagram and Twitter. And the videos and the photographs, the selfies that she put up, they were a mixed bag — I mean, just sort of ordinary things. She bought a new dress. And she would put it on. And she'd ask, do I look sexy? She would make videos about her thoughts on everything from politicians to movies to her crushes on certain cricketers. So we liked to watch her. We liked to make fun of her. We liked to see how this young woman was just expressing herself. And she became famous for doing pretty much that — just entertaining us.

We do have a lot more women that we're seeing online now doing the sorts of things that she did. I think that she created a blueprint for the social media celebrity over here in Pakistan because at the time that she became famous, we weren't really seeing a lot of people who understood their audience as well as she did. She really understood that to be a viral star, it really didn't matter what you were putting out or whether people were praising you. It was just important that they were talking about you.

On what led up to her murder

A few weeks before she was killed, Qandeel had met up with a cleric who she had been on a TV show with. And when he was visiting Karachi, where Qandeel lived, he said, why don't you come over and meet me? She went over to his hotel. She posted a couple of pictures from their meeting. But afterwards, she tweeted that he had behaved inappropriately with her. She didn't specify what had happened. And it became a "he said, she said" moment.

So Qandeel wasn't actually her real name. It was a name she'd made up for herself. And she'd never shared where she came from, any details about her family life. That's what Mufti Qavi, the cleric — that's what his followers started to do. And then they shared her real name. They shared information about where she came from, where her parents lived. And then, suddenly, the people in their village who didn't know that this woman was online promising strip teases or dressing in certain ways or saying certain things — they found out about it. And they turned on Qandeel's family and her brothers.

On her brother's confession and her parents' reaction

Because the way that the legislation worked at the time, his parents could have forgiven him for murdering his sister. And so he would've been able to walk free, which is why he confessed so willingly and so proudly. ...

But Qandeel's father turned around and said, you know, even if it means that my son has to hang for this, that's exactly what's going to happen. And I want him punished.

On whether this case changed anything in Pakistan

I think that Qandeel's murder — it's what comes out of a system that has such deep roots. An honor killing takes place not just to punish a person who is believed to have stepped out of line. It also serves as a warning to other people in that community or in that society. So it's almost to say, you know, if you do something similar, this is what could happen to you. And in Pakistan, it's going to take, I think, a long time before we start to dismantle that system. But we're definitely working towards it. And I think, especially, a lot of young women have become a lot more vocal online. It's safest online. They've become better at organizing themselves, speaking up when they feel like something is happening that they don't agree with. But I do think it's going to take time for a system to completely change.