Accessibility links
When Is The Iowa Caucus? And More Key Questions Answered Vermont Sen. Bernie Sanders is the favorite heading into the caucuses, but polls have shown a tightly jumbled race at the top. Here are key questions and answers about Monday night. 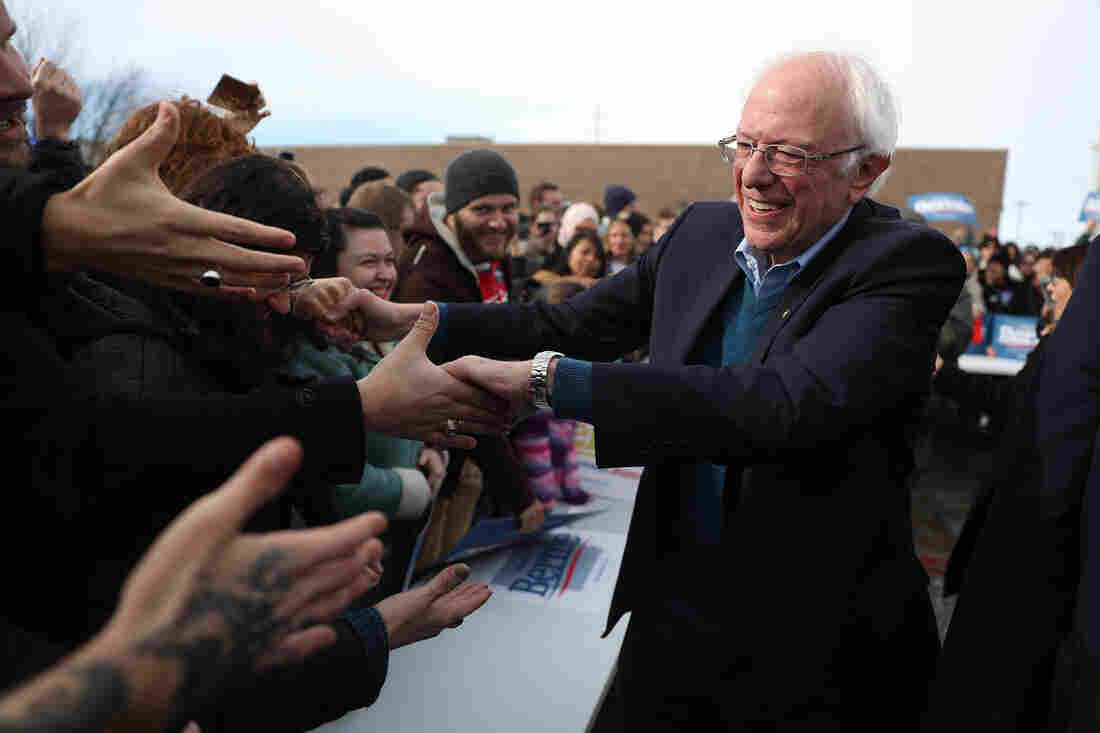 Vermont Sen. Bernie Sanders greets people at a campaign field office in Cedar Rapids, Iowa. Sanders is the slight favorite to win the caucuses, and he hopes it vaults him to the Democratic nomination. Joe Raedle/Getty Images hide caption 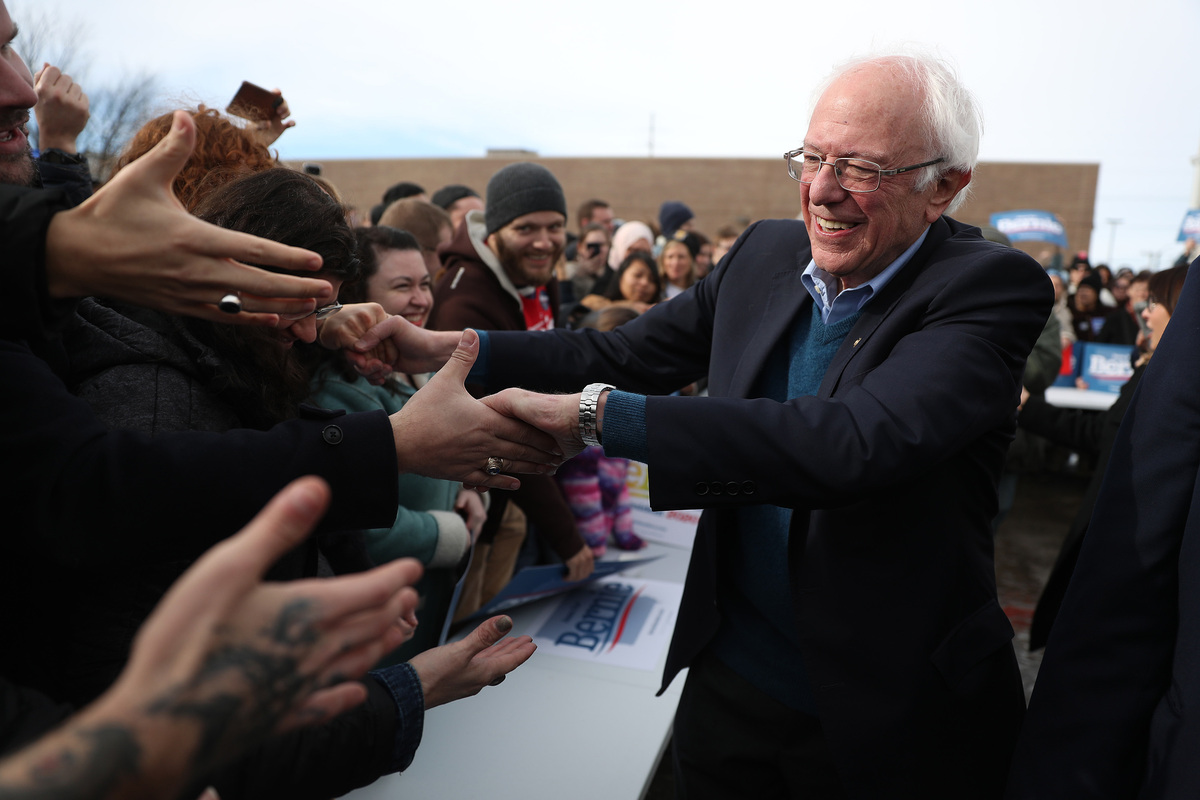 Vermont Sen. Bernie Sanders greets people at a campaign field office in Cedar Rapids, Iowa. Sanders is the slight favorite to win the caucuses, and he hopes it vaults him to the Democratic nomination.

Voting in the Democratic presidential nominating contest is about to kick off Monday with the Iowa caucuses.

The stakes are high in Iowa — the last four Democratic nominees have all won the Hawkeye State. But after about a year of campaigning and $50 million spent here by the candidates, the outcome is unclear.

The pressure is on Vermont Sen. Bernie Sanders, who led in the polls coming in, has drawn the biggest crowds on the ground, and does incredibly well with younger voters.

Former Vice President Joe Biden hopes to do well enough and that his base here — older voters — shows up.

What The 2020 Election Is All About

Former South Bend, Ind., Mayor Pete Buttigieg drew the second-largest crowd here in the past couple of days and inspires a lot of people, but there are questions about the depth of his experience.

And Massachusetts Sen. Elizabeth Warren's organization is vaunted, but it's going to be tested, as will her "fighter" message, as she tries to thread a needle between progressives and moderates.

Here are some answers to key questions about the caucuses.

When are the Iowa caucuses?

How long should they last?

About an hour, maybe less this year, because of a rules change where there are only two rounds of caucusing.

When should we expect results?

The first results are expected to start coming in by 8:45 p.m. ET or so. It could take longer if results are close. 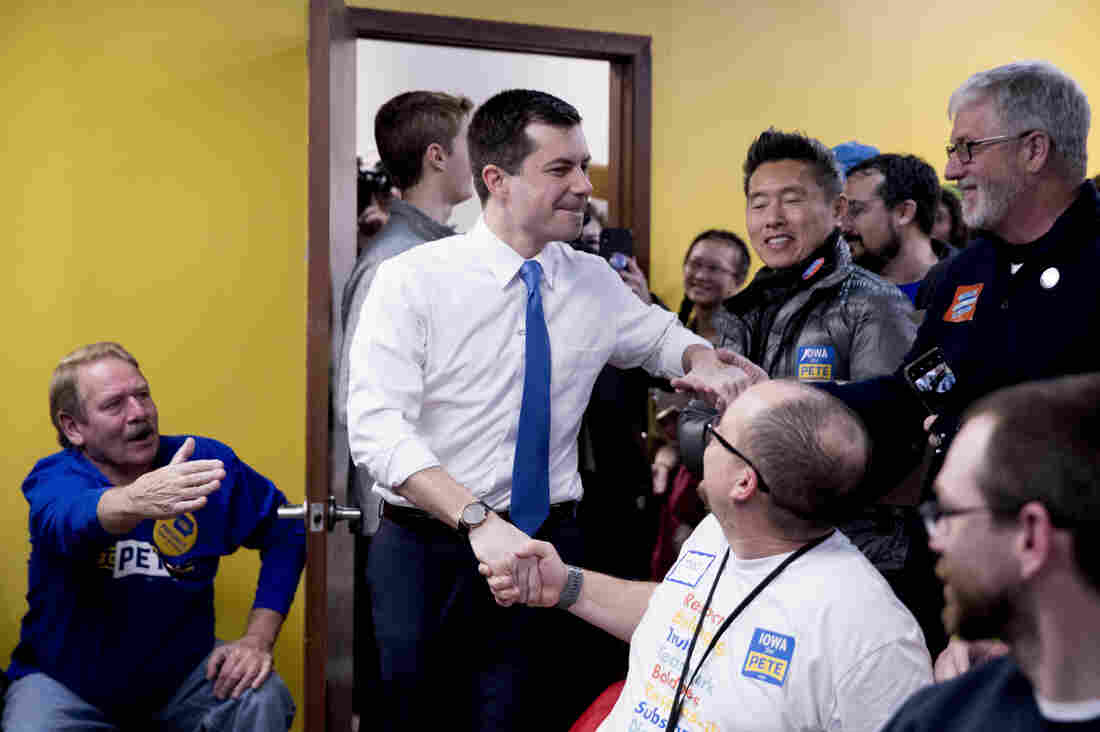 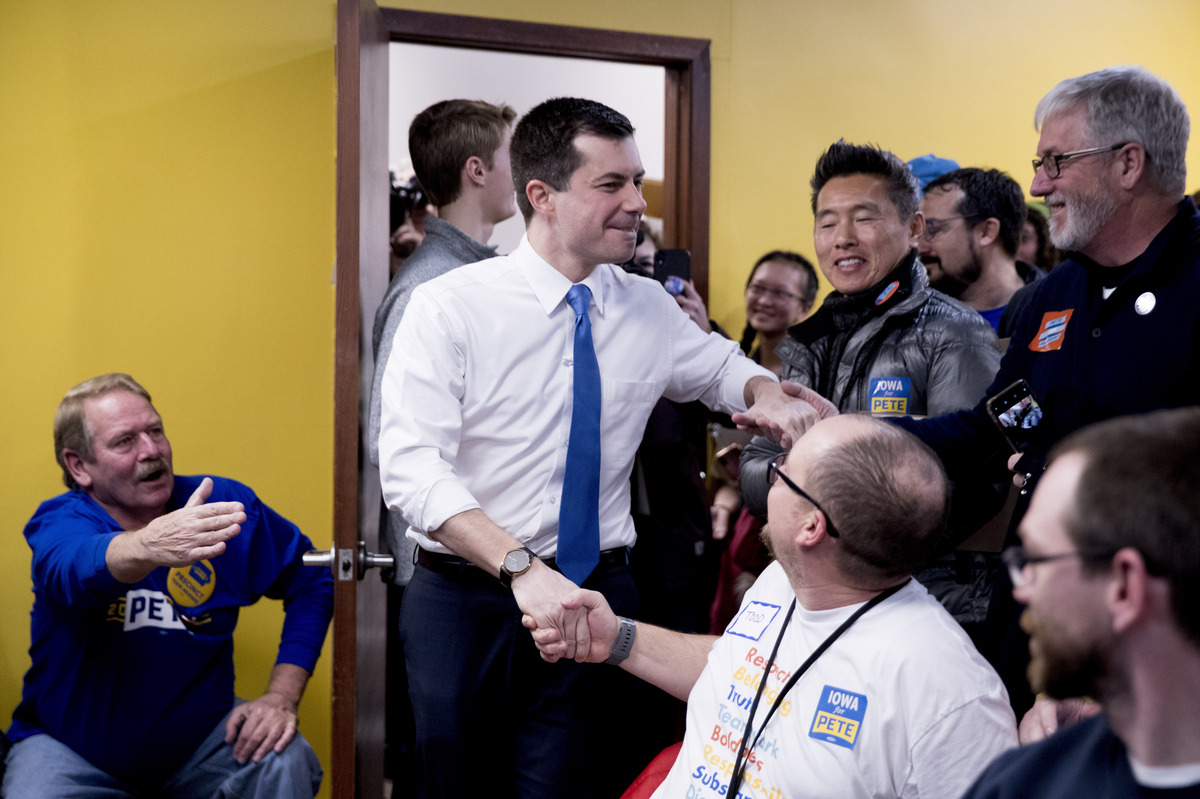 What is this about a 15% threshold?

A candidate has to get 15% to move on to the second and final round of caucusing. If they fall short, their supporters have the choice of going to another candidate, which is why caucusgoers' second choices are so important.

Second choice could be determinative with such a crowded field.

How many delegates does Iowa have?

Iowa has 41 pledged delegates to the Democratic National Convention. But it's a long road to their selection.

By the way, those 41 delegates represent only about 1% of the total delegates to the national convention.

What are we expecting for turnout?

Crowds have been very large for most events for each of the top-polling candidates, which foretells a potentially high turnout. The number to watch is 239,000. That's the record for the Democratic caucuses, set in 2008. 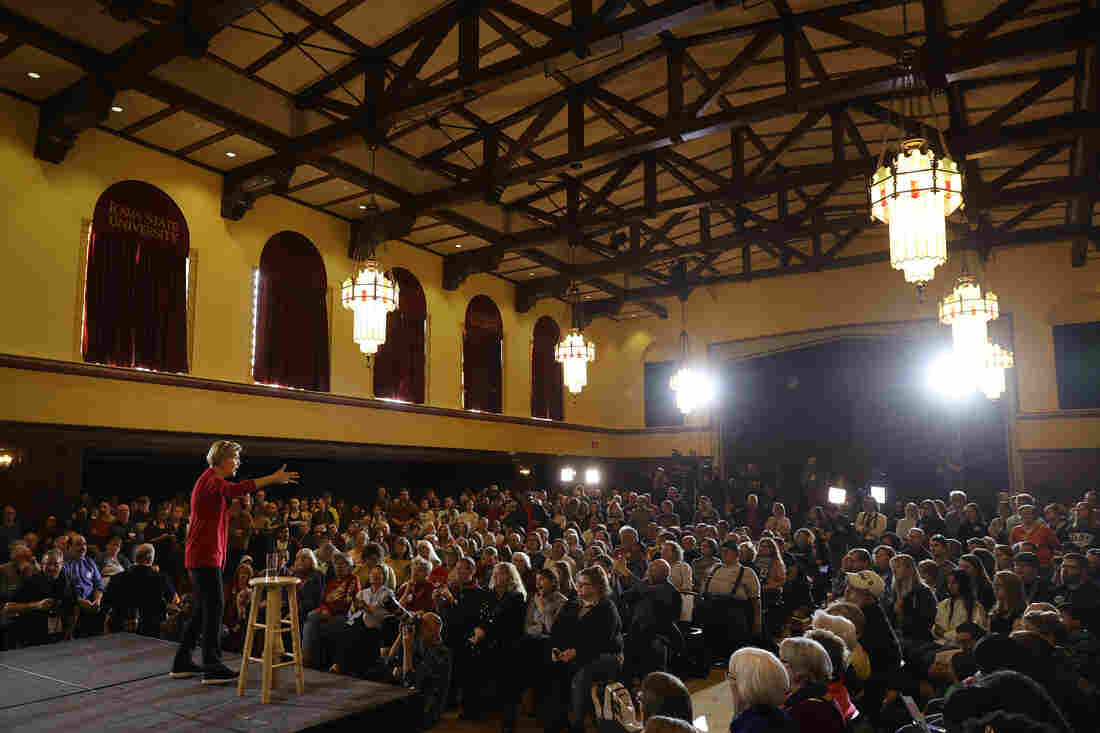 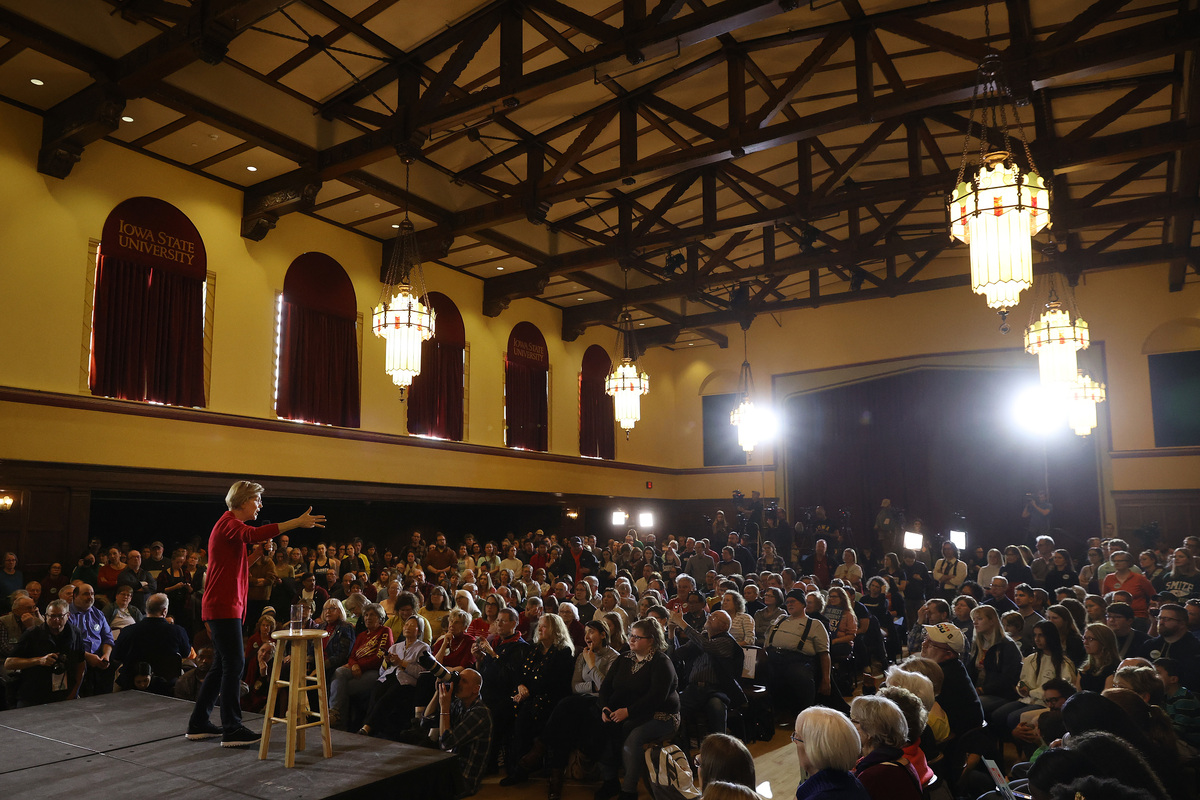 The second-highest was in 2016 at 171,000, but the campaigns and state party are expecting record-breaking turnout. That would be a good thing for the party as a potential indicator of enthusiasm for this fall's general election.

What are some things to watch for that may tell which way things are going?

Much of the result Monday night will depend on the shape of the electorate. If it is a record turnout, the Sanders campaign is confident that will help him. But it will also depend on the types of people who caucus.

A key thing to watch is how moderate or liberal the attendees are. In 2008, 54% were liberal; in 2016, when Sanders nearly won, it was more than two-thirds liberal.

The older the electorate, the better for Biden and possibly Buttigieg. The electorate being slightly older in 2016 than 2008 benefited Hillary Clinton.

Age and ideology were critical to how the 2016 caucuses turned out.

Maybe the most important variable is who wins those late deciders. A significant chunk of Iowans decide on their candidate late. In 2016 and 2008, a quarter or more of Iowa Democrats chose their candidate within the last week of campaigning.

In 2004, when former Sen. John Kerry of Massachusetts was trailing badly in the polls a month out and wound up winning, a whopping 42% decided in the final week.

If I'm looking at a map, where are key places with the most votes?

About 40% of the vote total in the Democratic caucuses comes from two places — Des Moines and the surrounding counties, as well as the eastern part of the state, from Cedar Rapids to Davenport.

Here are the counties with the most votes in the 2016 Iowa Democratic caucuses and how they broke for Sanders and Clinton. You can play along as the votes come in Monday night (totals are approximate):