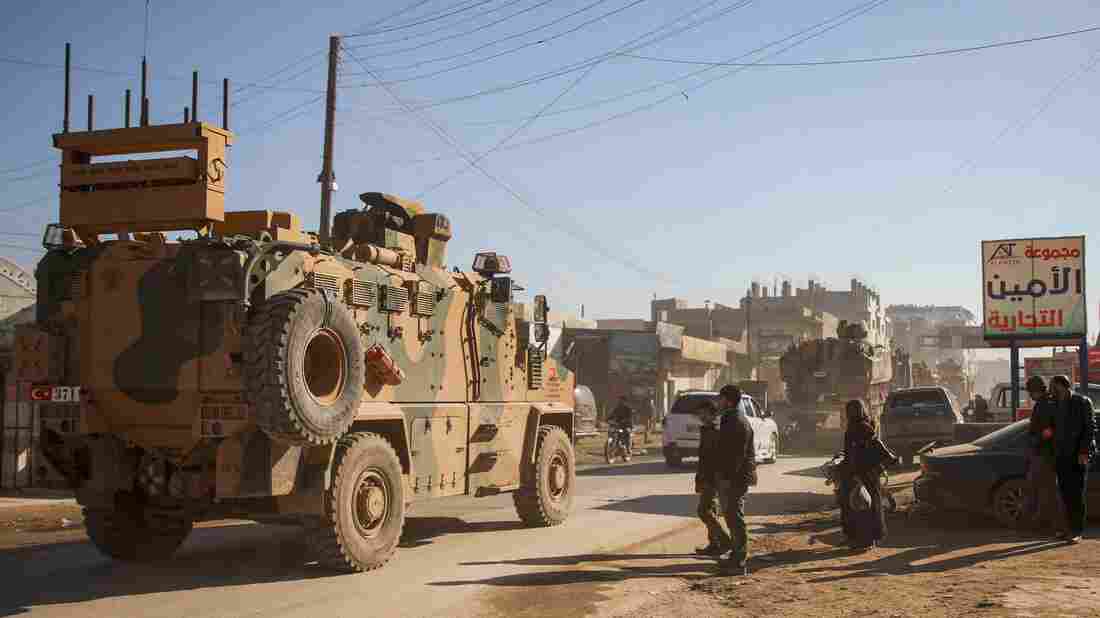 A Turkish military convoy passes through the Syrian town of Dana, in Idlib province near the Turkish-Syrian border, on Sunday. It is there, in northwestern Syria, that friction between the country and neighboring Turkey has flared into direct violence. Aaref Watad/AFP via Getty Images hide caption 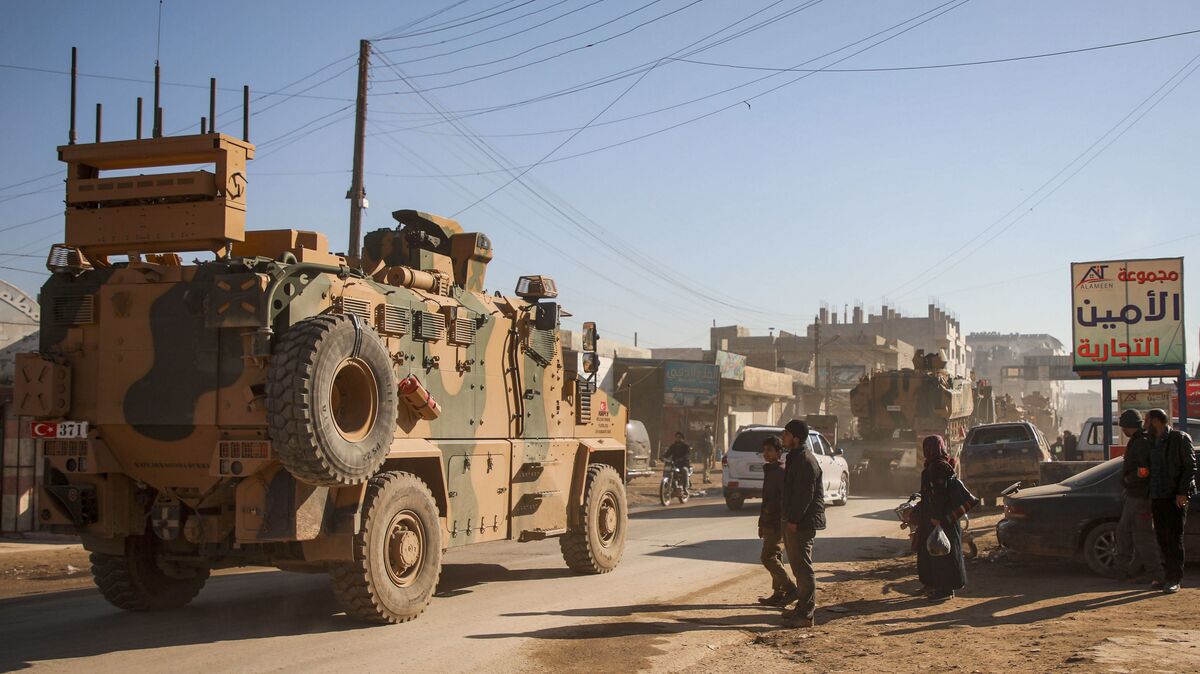 A Turkish military convoy passes through the Syrian town of Dana, in Idlib province near the Turkish-Syrian border, on Sunday. It is there, in northwestern Syria, that friction between the country and neighboring Turkey has flared into direct violence.

Turkey and Syria traded attacks near their shared border in a spasm of direct, deadly violence that threatens to escalate the friction between two increasingly bitter neighbors — and more deeply entangle Syria's ally Russia.

On Monday, officials in Ankara announced that at least six Turkish soldiers were killed in an artillery attack launched by the Syrian regime in the northwest Syrian province of Idlib. Within hours, Turkey answered with an assault of its own, killing several dozen Syrians in a retaliatory strike on some 40 regime positions in the area, according to Turkish President Recep Tayyip Erdogan.

However, the Syrian Observatory for Human Rights, an independent monitoring agency based in the U.K., placed the death toll at 13 Syrian soldiers.

"We are determined to continue our operations to ensure the safety of our country, our nation and our brothers in Idlib," Erdogan told reporters Monday, in comments reported by Turkey's state-owned Anadolu Agency.

"Those who test Turkey's determination with such vile attacks," he added, "will understand that they made a big mistake."

His remarks are a warning not just for the Syrian regime, but also for the Kremlin.

A U.S. State Department spokesperson condemned the "continued, unjustifiable and ruthless assault by the Assad regime, Russia, Iran, and Hizballah on the people of Idlib." The statement called for an immediate ceasefire and access for humanitarian groups to aid people in the region.

Russian warplanes have been supporting a recent Syrian military offensive in the border region, where opposition forces cling to a few final handholds after years of bloody civil war. Russia, a key ally of Syrian President Bashar Assad, has backed Assad's push to quash those remaining forces in Idlib — much to the consternation of Turkey, which has troops stationed there as part of a 2018 de-escalation agreement with Russia meant to prevent accidental confrontations.

"Our brave soldiers are conducting security and humanitarian missions inside Syria in line with our agreements with Russia," Fahrettin Altun, Turkey's communications director, tweeted in a thread posted Monday. "If Russia is unable to control the Assad regime from targeting us, we will not hesitate to take actions against any threat, just as we did today in Idlib."

We grieve for our fallen martyrs today but we will not be deterred by the threats by a criminal regime. We can’t compromise our national security. The Syrian crisis has to be brought to an end through serious involvement and robust support by the international community.

Russian officials rejected Ankara's assertions. Russia's Ministry of Defense — in a statement cited by the state-run TASS news agency — said the shelling that killed Turkish troops was in fact targeted at "terrorists" and that the collateral damage happened because Turkey failed to notify Russia about its movements.

Regardless of the cause, the fact of the killings has exacerbated an already tense situation in northwest Syria — particularly in Idlib, the last rebel-held province and home to more than 3 million civilians. Negotiations between Russian and Turkish diplomats, who back opposing sides of the Syrian war, have done little to mitigate the violence and its effects on residents.

The United Nations says that at least 1,300 of those civilians were killed during a four-month span last year and that, all told, more than 700,000 of them have been displaced by the fighting in the past nine months alone.

"I am alarmed at the deteriorating humanitarian situation in Idleb, northwest Syria, where over three million civilians remain trapped in a war zone – the vast majority of them women and children."

"Civilians in other areas are not waiting around to see what happens. They're packing up. They're heading close to the Turkish border. Some of them are going to Idlib city, which is the capital city," NPR's Deborah Amos explained last month. "But the Turkish border's as far as they can get because that border's closed."

The latest attempt at a cease-fire took effect Jan. 12, though the truce in Idlib — like several others before it — has largely failed to calm a recent surge in fighting between the Syrian regime and rebel forces in the province.