Accessibility links
What's It Like Working At A Chinese-Run 'American Factory'? It's 'Complicated' Working on the factory floor is hard, hot and dangerous, says Steven Bognar. He and Julia Reichert made a documentary — just nominated for an Oscar — about a GM plant reopened by a Chinese company. 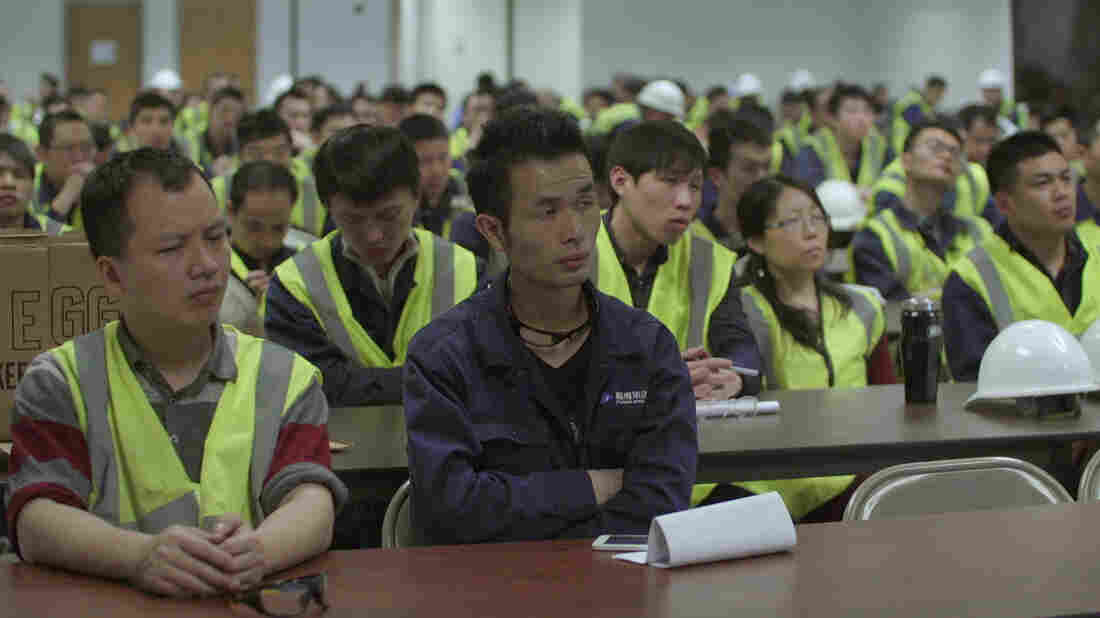 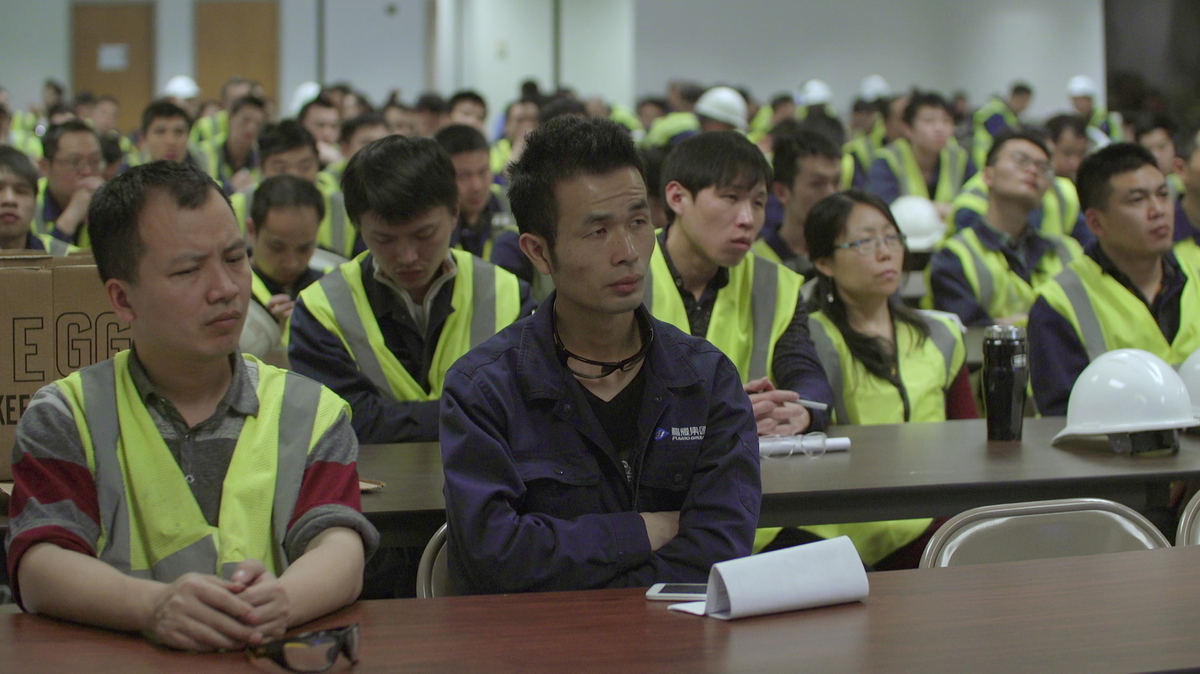 In 2008, GM closed its manufacturing plant in Dayton, Ohio, sending the community into a tailspin. Workers who had been unionized at GM struggled to find jobs that paid close to the wages the plant had paid.

When the Chinese glass manufacturer Fuyao reopened the shuttered GM plant in 2016, the community welcomed the influx of new jobs. But as time went on, enthusiasm waned. Some former GM employees found themselves working longer hours at Fuyao for half the pay.

In the Oscar-nominated documentary, American Factory, Bognar and Julia Reichert capture the tensions that exist within the Chinese-owned, Ohio-based plant. This is Reichert's fourth Oscar nomination — her first was in 1978.

"In the United States, we fought to have an eight-hour day and have weekends off," she says. "That's pretty much unheard of in industrial work in China. ... If the boss says you have to work six days a week or seven days a week you just do it."

Bognar describes the relationship between the company and its American employees as a "complicated" one. People are grateful for the jobs, but the work is tough — especially on the factory floor: "It's hard, it's hot, it's dangerous, and the expectations are very high," he says. "And yet the pay is not what it should be."

American Factory won last year's Sundance Award for Directing of a U.S. Documentary. It was the first acquisition for Barack and Michelle Obama's production company, Higher Ground, and is streaming on Netflix.

Bognar: In the film, Shawnea Rosser, who worked at the old GM plant and now works at Fuyao, she says it varies directly. She says at GM she was making $29 and some cents per hour and at Fuyao she makes $12.84. So that's less than half of what she used to make. She has several children. ... They lost their house because they couldn't they couldn't make the mortgage payments after GM closed. It's a very different world.

Here's the crazy thing: In China, it's been a remarkable trajectory. China's on the rise and [so are] people in the film, like Wong He. He is the furnace engineer who has been sent from China to the U.S. He's here for at least two years. He's not going to see his children for two years. But he's been working at Fuyao since he was 19 years old. He is so dedicated to Fuyao, and it's offering him a path to the middle class. He told us he's going to be able to build a house for his family, for his kids back in China, because he's making such good money. Meanwhile, in the States, people like Shawnea, who once had a blue-collar, middle-class life — modest but secure — they have no security anymore, and it's a very different landscape. 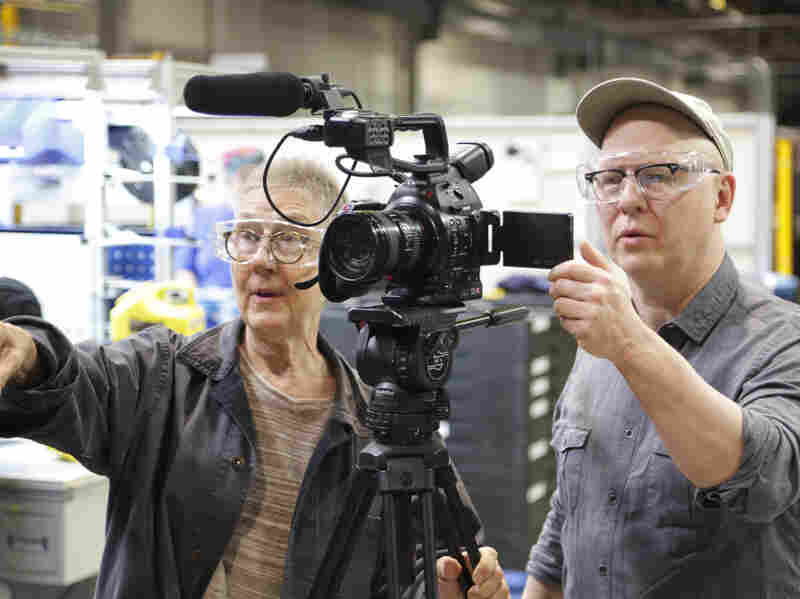 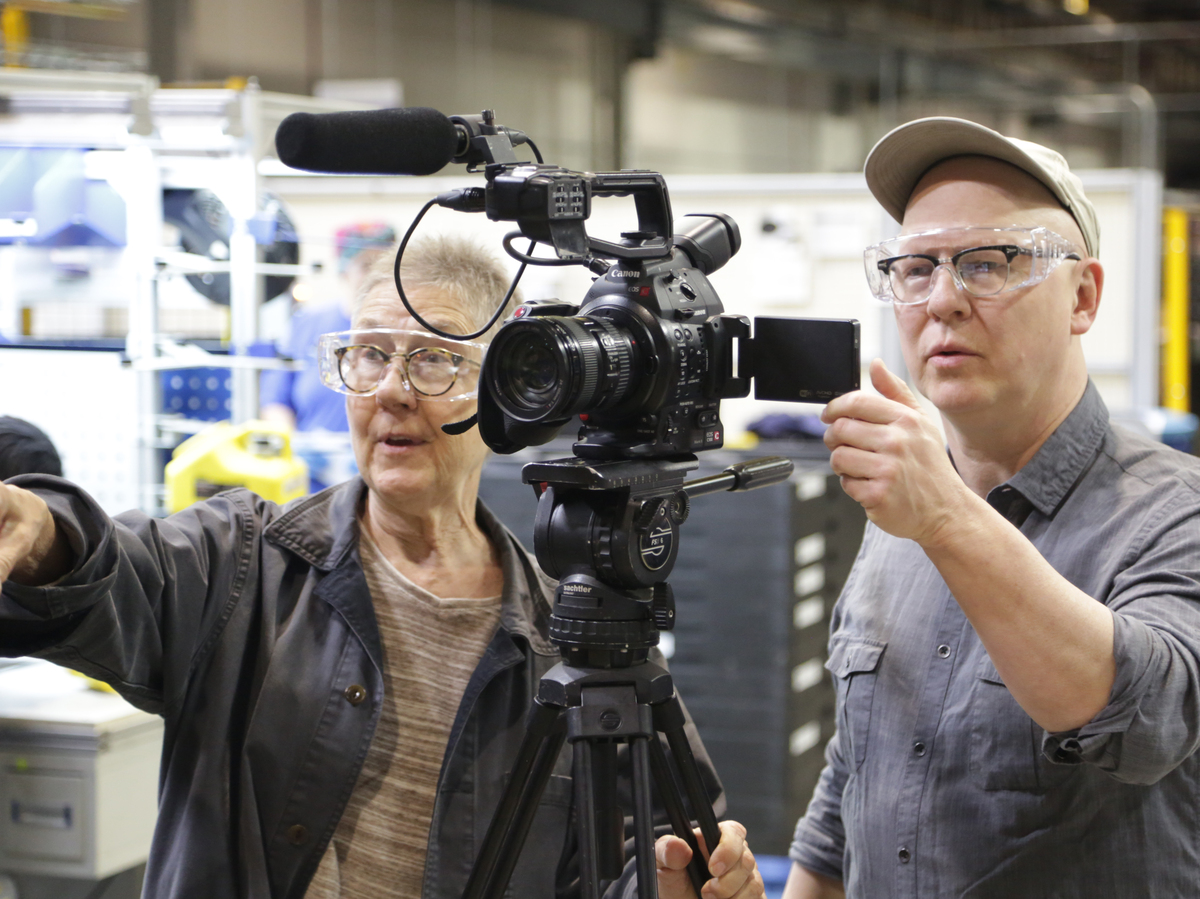 Directors Julia Reichert and Steven Bognar live 25 minutes from the Fuyao factory in Dayton. Their previous film, The Last Truck, documented the closing of a GM factory in Moraine, Ohio.

On the work culture clash between Chinese and American workers

Reichert: In our work culture, workers expect to be respected. [They] expect to be not told, "Just do this." [The] American worker will respond, "Why?" And, "Maybe I have a better idea." They'll look, the supervisor right in the eye and question them. This does not really happen in China very much. It's just a different work culture where people do what the boss says. ...

People [in China] expect to work 12-hour days, six days a week. The Chinese workers we spoke with — we spoke with a lot of them — they're not happy about it. They don't like being away from their kids for most of the year or only seeing them on Sunday. Partly it's because that's what the culture has brought them to. They've lifted millions and millions of people out of poverty in one and a half ... generations. But that has resulted in this really intense work life. ... Chinese workers are proud of their country, they're proud of their company, they're really proud of how China is flourishing in the world. ...

The American workers we know, I can't say that they're proud of their company or they feel really behind America, like America is really helping them rise in the world.

The American workers we know, I can't say that they're proud of their company or they feel really behind America, like America is really helping them rise in the world. I think we're on a trajectory of less hope, [fewer] possibilities ... as far as working class people.

Reichert: There's a slogan that is said, which I think so in kind of [encapsulates] capitalism, which is "To stand still is to fall back." ... They chant it every day.

Bognar: When one of the American supervisors, when he got home [from the trip to Fuyao headquarters], he tried to get the Americans to line up in that kind of military formation and it just did not go that well. It's like the people who signed up to work in this hot, intense glass factory in the United States, they're making $12.84 an hour and they're not getting paid enough to line up and be regimented like that.

Reichert: In the plant it was pretty hot. You see there's safety issues. You see there were a lot of injuries. For a long, long time, there was no nurse there. At the old GM plant they had a nurse on duty and a doctor on call at all times — all shifts. They had nothing like that at the Fuyao plant at first. ... Now they do, something like three years into it. Right at the end of our filming, they actually did get a nurse.

I think a really big thing was the policies would change, things like the sick leave. Do you need a doctor's note? ... Do you get fired even with a doctor's note? Do you get fired if you have to go to the emergency room or whatever? How many vacation days you would get, what your pay was. People were told when they joined [the company] ... that within a year they would get a raise. And we went around and asked people a year or so later: Did you get your raise yet? And nobody said they did. And now maybe they'd get it three months later, if they really bugged H.R., they'd get it. But those kind of things were just really frustrating, that they had no power.

Bognar: From the Chinese perspective, the company was not making a profit as quickly as the Chinese expected it to. They thought the company would be profitable after a year. We heard this again and again. And here we are, like, a year and a half, two years into being an operational facility and it's still not turning a profit. So the Chinese management fires the American leadership and replaces it with Chinese leadership. Supervisors are swapped out from American supervisors to Chinese supervisors, and there's more and more pressure on the American workforce. And that led to growing frustration on the part of the Americans. They felt they were being treated even more roughly because of the because of higher demands for productivity. And it was just getting harder and harder — and so goodwill started really evaporating both directions.

Reichert: They were very highly paid and they were in there from very early on. As soon as there was any whisperings like a T-shirt about the UAW or those meetings going on, immediately the union avoidance company was brought in. Now, I will say this is not a Chinese thing. Pretty much in any facility, be it a distribution center, be it a warehouse, be it a factory — actually be it in a white-collar working place — if there's talk of a union, they're going to bring in one of ... these consulting companies. ... There's hundreds of them all across the country. I think most Americans do not realize that that is behind a lot of the loss of union power, the loss of the strikes. They taught the Chinese management and supervisors to do everything they could to avoid the union.

Bognar: Next time you read in the paper like, "Oh, the Volkswagen workers in Tennessee, they rejected the idea of a union." The thing we don't hear about is all the inside closed door campaigning that the companies do.

Roberta Shorrock and Seth Kelley produced and edited the audio of this interview. Bridget Bentz, Molly Seavy-Nesper and Beth Novey adapted it for the Web.