Accessibility links
'No Longer A Friend': Ukrainians Are Losing Faith In The U.S. "America used to be a beacon of freedom, liberty and anti-corruption efforts. Now a lot of Ukrainians feel like ... we are by ourselves," says a Ukrainian political commentator. 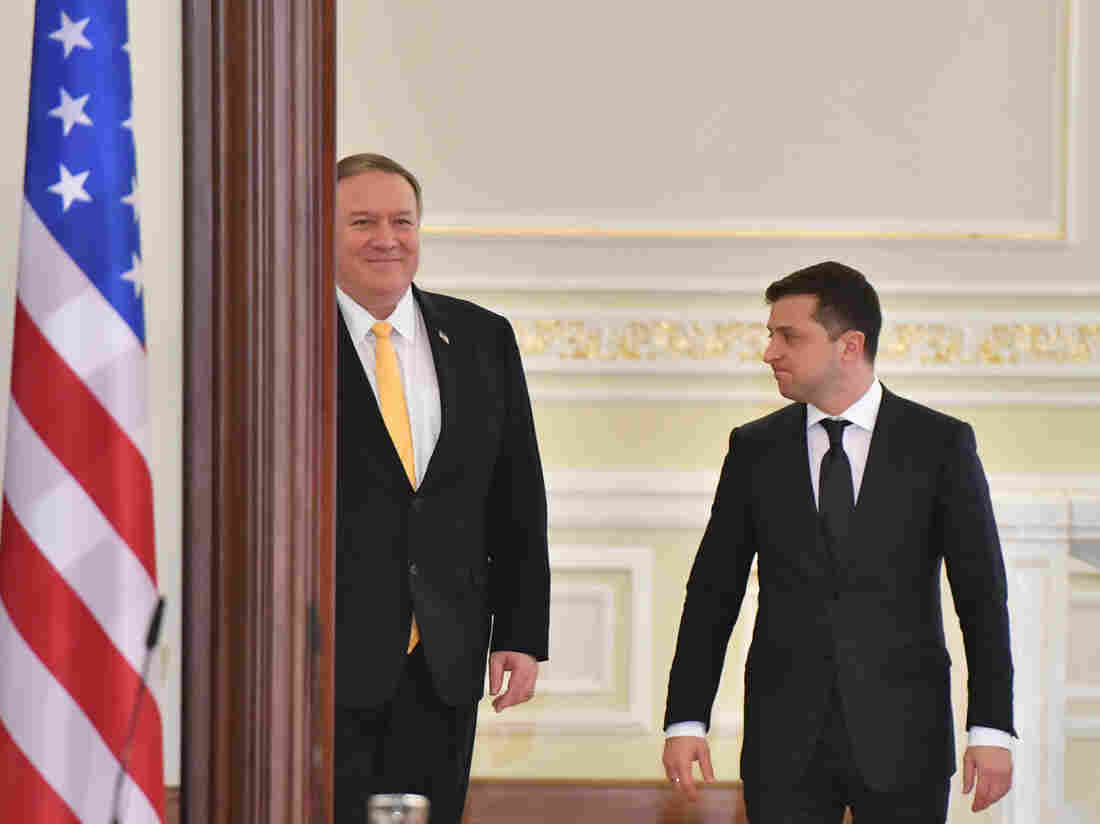 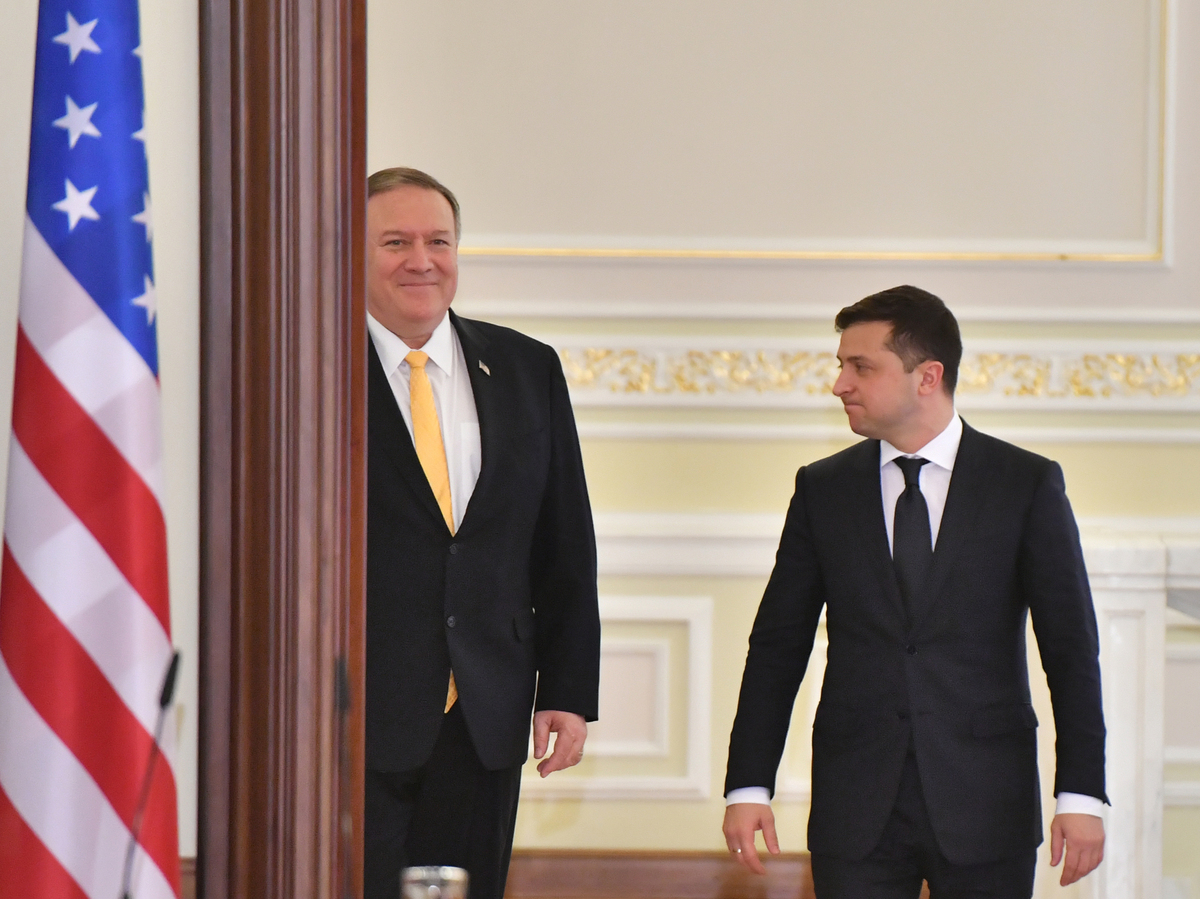 Nataliya Gumenyuk grew up in a small town outside of Kyiv during the first hungry years after Ukraine gained independence from the Soviet Union in 1991. Like many Ukrainians of her generation, she was raised on Hollywood movies — but also the American credo of positive social change.

Gumenyuk, who traveled to the U.S. to cover the last three presidential elections, says America has lost its sheen since Ukraine unwittingly became the focus of President Trump's impeachment process in Washington.

"There was the idea of a moral example, which is definitely no longer there," Gumenyuk says.

Revelations that President Trump asked Ukrainian President Volodymyr Zelenskiy to investigate former Vice President Joe Biden are at the heart of the impeachment trial in the Senate. Trump's decision to freeze military aid to Ukraine over the summer, as well his administration's back-channel efforts to contact Zelenskiy, have shaken many Ukrainians' belief in the U.S. as a steadfast ally and role model.

Last week, Secretary of State Mike Pompeo was the first high-ranking administration official to visit Ukraine since the impeachment scandal broke last fall. There hasn't been a U.S. ambassador in Kyiv since May, when Trump abruptly recalled Ambassador Marie Yovanovitch. And Kurt Volker, who was the top U.S. diplomat tasked with negotiating an end to Ukraine's six-year conflict with Russia, resigned in September before giving testimony in the impeachment inquiry.

Before leaving for Europe last month, Pompeo called into question whether Americans care about Ukraine.

"Maybe there was the idea that with this visit, Pompeo could say: 'Look, I care about Ukraine and have come to Ukraine' so it could be used in the impeachment trial," says Gumenyuk.

Zelenskiy wants to secure a White House visit and a replacement for Volker. That would signal to the Kremlin that the U.S. still supports the Ukrainian government in its bid to end the low-level war with Russian-backed separatists in eastern Ukraine. But Pompeo offered neither a date for a meeting with Trump nor a new envoy to Ukraine.

"Previously it was Ukraine that was unpredictable. Now, we have no idea what's going to happen in the United States next week," Yakovina says. "A lot of people are disappointed. America used to be a beacon of freedom, liberty and anti-corruption efforts. Now a lot of Ukrainians feel like, 'yeah, we are by ourselves.'"

After his talks with Zelenskiy last Friday, Pompeo held a meeting with representatives of Ukrainian civil society, including Olena Tregub, head of the Independent Defence Anti-Corruption Committee, a nongovernmental watchdog group.

Tregub says the meeting lasted more than an hour and focused on the challenges the Zelenskiy government faces in fighting corruption and improving Ukraine's investment climate. Ukraine ranks 126th in Transparency International's 2019 Corruption Perception Index, between Bolivia and Laos.

While Tregub welcomed the opportunity to speak with Pompeo, she says the U.S. can do more to support civil society beyond providing financial assistance.

"This is not a safe environment for anti-corruption campaigners," she says. "The U.S. should continuously show that it supports agents of change. One visit is just a start but definitely not enough."

Gumenyuk, whose TV channel depends on funding from foreign governments, says Ukraine's reliance on U.S. assistance makes it awkward to criticize the Trump administration for its transactional approach to foreign policy.

"America is not an adversary — but maybe no longer a friend," Gumenyuk says. "You'd want to have the U.S. be a more trustworthy partner."

But not everyone in Kyiv takes such a bleak view of U.S.-Ukrainian relations.

Ivan Pohrebniyak, an IT entrepreneur, doubts whether Pompeo was speaking for the Trump administration when he questioned Americans' interest in Ukraine.

"Is this the general opinion of the entire government of the U.S.? I don't think so," says Pohrebniyak, 36. "How much did previous presidents care about Ukraine?"

Pohrebniyak, who travels frequently to the U.S. for work, says Trump appeals to him as a businessman who gets things done.

He says he is keeping an open mind about whether Trump deserves to be impeached and still believes the rule of law will prevail in the U.S. — unlike in Ukraine.

With the Senate all but certain to acquit Trump on Wednesday, political analyst Yakovina is less sanguine.

"As long as Donald Trump is president of the United States, nobody can be sure of anything," Yakovina says. "I'm afraid that after his acquittal in the Senate, Trump will start pressuring Ukraine even more. Now he won't have anything to fear."