Accessibility links
Review: 'Sports Is Hell,' By Ben Passmore Passmore's timely new graphic novel is set in an unnamed city whose football team has just won the Super Bowl, setting off fiery riots. It's a biting satire of political action, race and capitalism. 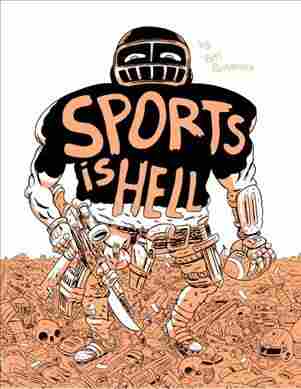 When you're confronted by the title of Ben Passmore's new graphic novel, it's all too easy to imagine any number of real-world problems the author might be referencing. Will Passmore spotlight the crisis around brain injuries in football, where the racial dimension (70 percent of National Football League players are black men) is as alarming as the NFL's attempts to bury inconvenient research? Maybe he'll focus on the abuses of college sports, whose institutions profit off the labor of unpaid athletes (again, often African-American) in exchange for illusory rewards. In recent weeks alone, sports news has been dominated by the cheating scandal surrounding the Houston Astros and discussion of the 2003 sexual assault case against Kobe Bryant. If this isn't hell, it's close.

Passmore's got more on his mind than organized sports, though — much more. Instead of targeting the sports world's manifold problems directly, Passmore uses them as an implicit, ominous backdrop for a broader fable of societal breakdown. On the book's opening page, a terrifyingly massive individual in football gear — armed with an equally terrifying jerry-rigged weapon — stands amid the debris of some kind of battle. There are human skulls, football helmets, beer cans, guns and team banners all jumbled together. Clearly, this will be a story of societally approved brutality giving way to society-wide violence — or perhaps setting the stage for it in the first place.

This tale is a myth without a moral — which makes it a dead-on parody of the good-and-evil, triumph-and-tragedy narratives fostered by organized sports.

Passmore's characters don't care; they just want to fight. At the beginning of the book, two African American characters agree that their local football team's impending Super Bowl victory will be sure to touch off citywide rioting that night. They're not troubled by this prospect: On the contrary, one, an anarchist, sees it as a golden opportunity. "Riots started almost every revolutionary black movement in the U.S.!" he says. "Watts Riots led to the Black Panther Party, Ferguson to Black Lives Matter." His companion agrees. "BLM [Black Lives Matter] is on that dusty nonviolence shit, not really revolutionary," she says. Armed with various weapons, they tie bandannas over their faces and head to the stadium — where a seething crowd expresses a cacophony of competing agendas. Some want to break stuff; others are simply celebrating the team. There are even a couple of people with BLM signs — but they're both white. "We love black people!" one says brightly.

Soon the more violent partiers prevail, and riots spread throughout the city. A handful of strangers find themselves dodging armed gangs of every political stripe, annihilating the hopes of black anarchists and white pacifists alike. As the violence spreads, two sportscasters who were commentating on the game shift their attention to the streets. "Jim, would you say the material conditions for generalized rupture are present or omnipresent?" one asks. It's a biting send-up of intellectualism — just one of Passmore's targets.

It's one among many. Sports is Hell is unusually scattershot for a work of satire. Passmore's takes on political action, race, violence and capitalism are cutting, but sometimes contradictory. None of the characters seem to represent approaches he wants to endorse, and the story becomes a meandering quest propelled by icy-hot blasts of judgment aimed in virtually every ideological direction. Some characters are brought down by their own delusions; others are the victims of random violence. This tale is a myth without a moral — which makes it a dead-on parody of the good-and-evil, triumph-and-tragedy narratives fostered by organized sports.

Sports is Hell would be awfully bleak if it weren't for Passmore's strangely comforting artwork. As in 2019's Bttm Fdrs and his comics for The Nib, his drawings here radiate a sense of friendly buoyancy. Passmore's got a curly line and a fondness for sweet colors (here it's peach), which function as visual antidotes to his grim narrative. His cartoony way of drawing violence provides another source of relief. The softness of his style sets him apart from a lot of political cartoonists, whose lines tend to vibrate with strident certainty. Passmore's curvy lines reflect the snarled emotions of his anxious, ambivalent reader. Even as he rages against inequality and exploitation, his art expresses reflection and restraint.

It makes Passmore a uniquely approachable political artist for all his pessimism. He may not have answers to the problems he names, but that's a mark of truthfulness. If you want stories with straightforward, win-or-lose endings, better stick with sports.