Accessibility links
Trump Gives State Of The Union Amid Impeachment, Like Clinton The State of the Union gets massive television ratings. This year, President Trump will deliver it a day before senators vote on whether to remove him from office. 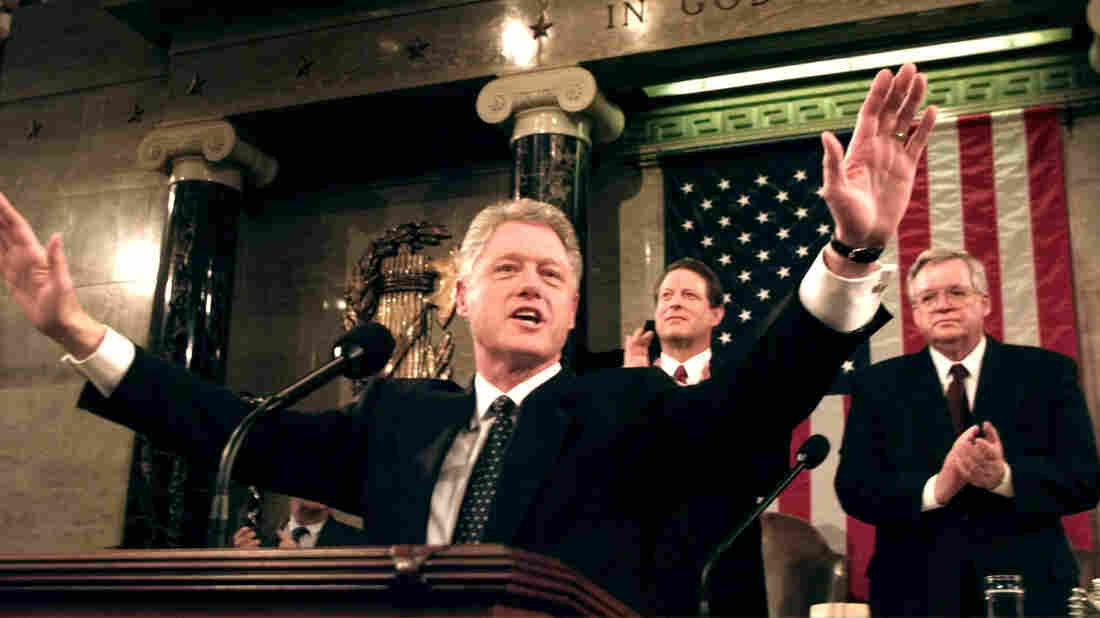 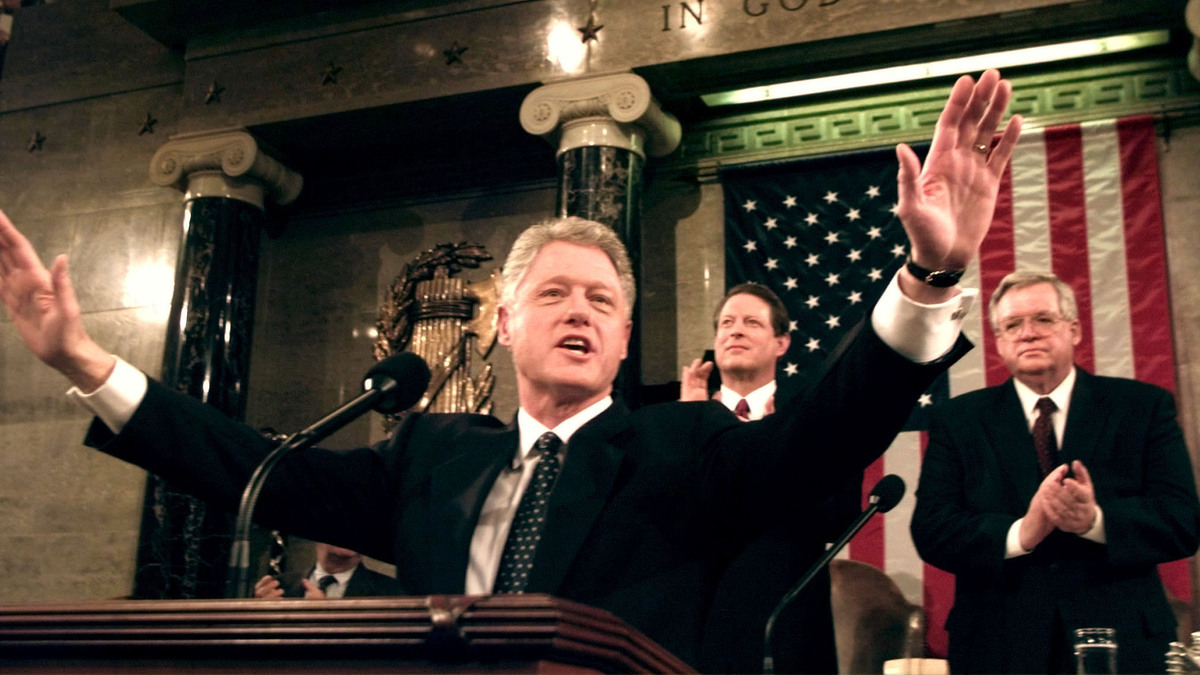 President Bill Clinton gave his 1999 State of the Union address during his impeachment trial, just as President Trump will on Tuesday.

When President Trump stands before Congress on Tuesday to deliver his State of the Union address, he will be a president impeached, but not yet acquitted.

Traditionally, the State of the Union address is the most important and most-watched speech of the year for a president. Doing it in the midst of an impeachment trial adds another political dimension.

President Clinton faced a similar situation in 1999. He delivered his State of the Union on the very day his legal team began presenting his impeachment defense to senators.

Ahead Of President Trump's State Of The Union, Here's What You Need To Know

When Clinton entered the House chamber that night, members of Congress stood and applauded. Dennis Hastert, the Republican speaker of the House who had voted to impeach Clinton, offered a warm greeting.

"Members of Congress, I have the high privilege and the distinct honor of presenting to you the president of the United States," Hastert said in introducing Clinton.

In his speech, which lasted more than an hour, Clinton never once mentioned impeachment, and his speechwriters say there was never a question of doing so. They stuck to bipartisan and optimistic themes.

"As he stood up there and was applauded, this did not feel like a president whose presidency actually hung in the balance," said Jeff Shesol, a White House speechwriter at the time and now a partner at West Wing Writers, a speechwriting firm.

Similar to Trump's situation today, there wasn't a lot of suspense about whether Clinton ultimately would be removed from office. He was riding high with near-record job approval. The economy was booming, and the budget deficit had been erased.

"America is working again. The promise of our future is limitless," Clinton said in his speech. "But we cannot realize that promise if we allow the hum of our prosperity to lull us into complacency."

In the speech, Clinton proposed a long-term fix for Social Security to put it "on a sound footing for the next 75 years." Which is to say, his policy ambitions weren't constrained by the specter of impeachment.

Throughout his impeachment and the years of investigations that preceded it, Clinton had tried to maintain an air of floating above it all.

"I think it increased our commitment to bipartisan themes that you probably would have seen in any event," Shesol said of the 1999 speech. 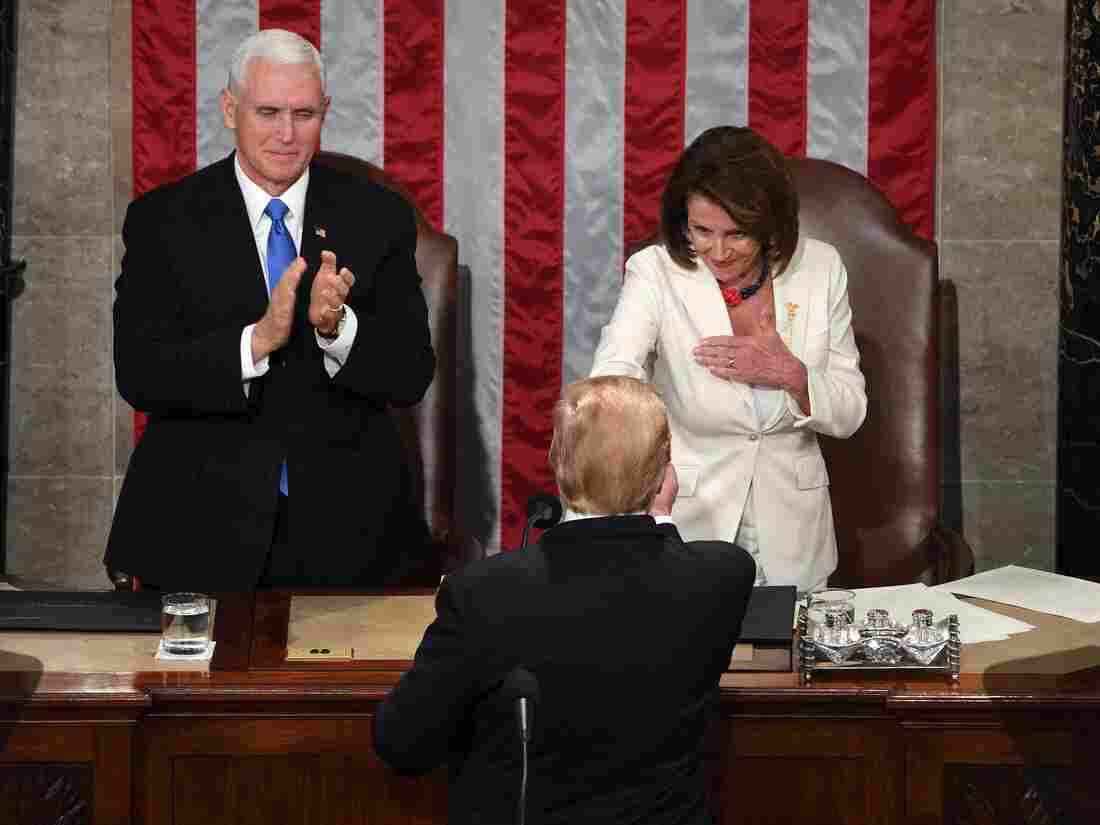 In his State of the Union address last year, President Trump warned House Democrats, led by Speaker Nancy Pelosi, that "if there is going to be peace and legislation, there cannot be war and investigation." Jim Watson/AFP via Getty Images hide caption 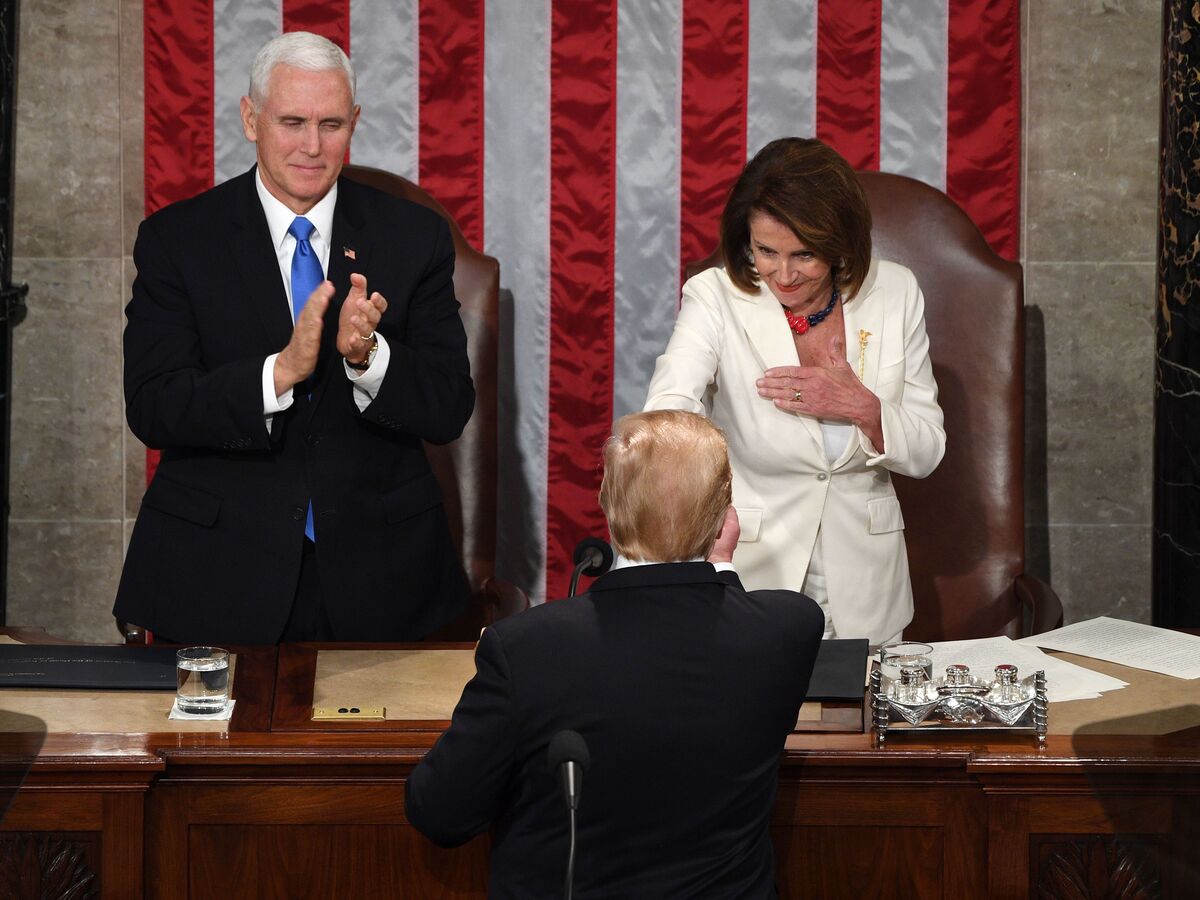 In his State of the Union address last year, President Trump warned House Democrats, led by Speaker Nancy Pelosi, that "if there is going to be peace and legislation, there cannot be war and investigation."

For Trump, the Senate vote on two articles of impeachment is set for Wednesday. The outcome is all but certain. But when he gives his State of the Union address, the vote won't have happened yet, robbing him of the opportunity to tout his acquittal.

In an interview on Fox over the weekend, Trump said he wasn't considering a delay in the address. "I'm going to have it. It's going to be done," Trump said. "We're going to talk about the achievements that we've made. Nobody has made achievements like we've made, so many different things."

To that end, a senior administration official who briefed reporters on the speech on the condition of anonymity said the theme will be "the great American comeback." The official described it as an optimistic speech that would touch on the economy, trade, paid family leave, immigration and national security.

Who Is Veronica Escobar? She Will Deliver Spanish State Of The Union Response

But he also hinted that Trump would draw contrasts with Democrats, including possible election opponents sitting in the chamber. "He will contrast his vision with radical proposals being floated on the left," the official said. "Clearly, socialism is a rising force in the Democratic Party with very specific designs on our health care system."

If Trump follows through with a partisan attack on Democrats, that would be a different tack than Clinton's aggressively bipartisan message of 21 years ago.

The administration official wouldn't say whether Trump would mention impeachment. But last year, with the Russia investigation underway, Trump issued a warning to Democrats that "if there is going to be peace and legislation, there cannot be war and investigation."

The line landed with a thud in the House chamber with applause that failed to catch on and audible murmurs. In the end, there were investigations, yet there were also a handful of bipartisan legislative accomplishments. 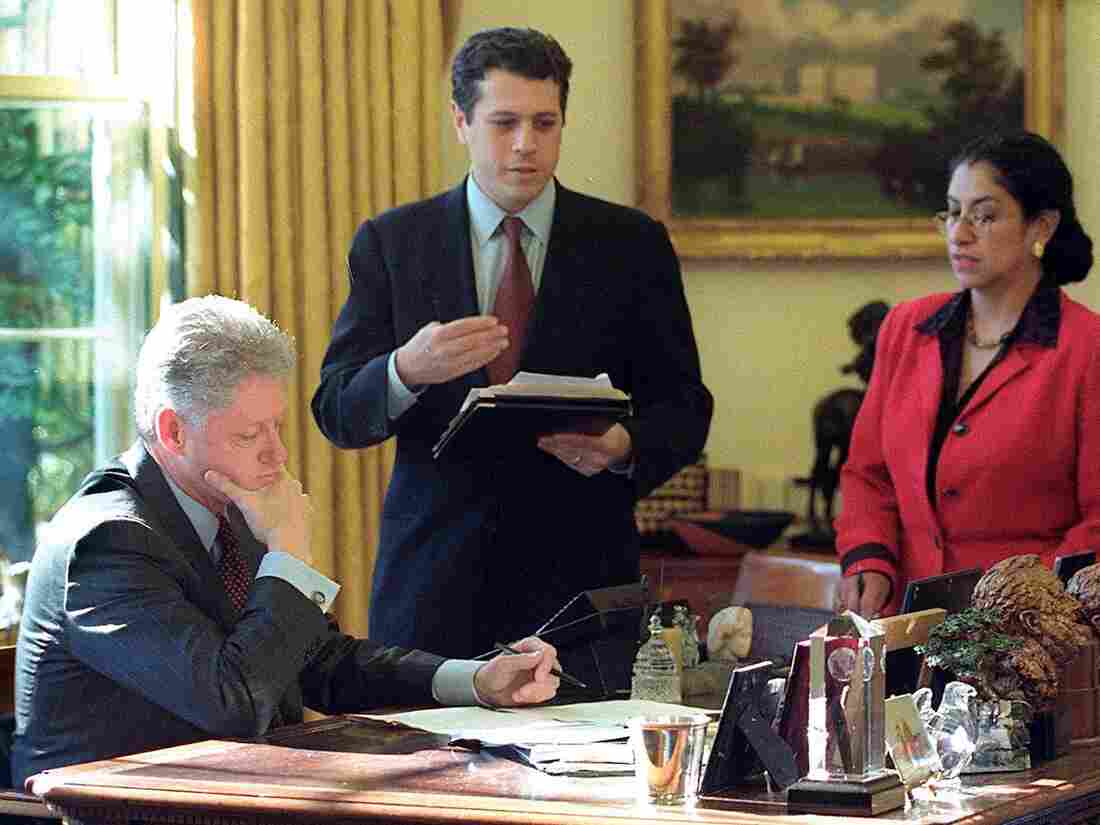 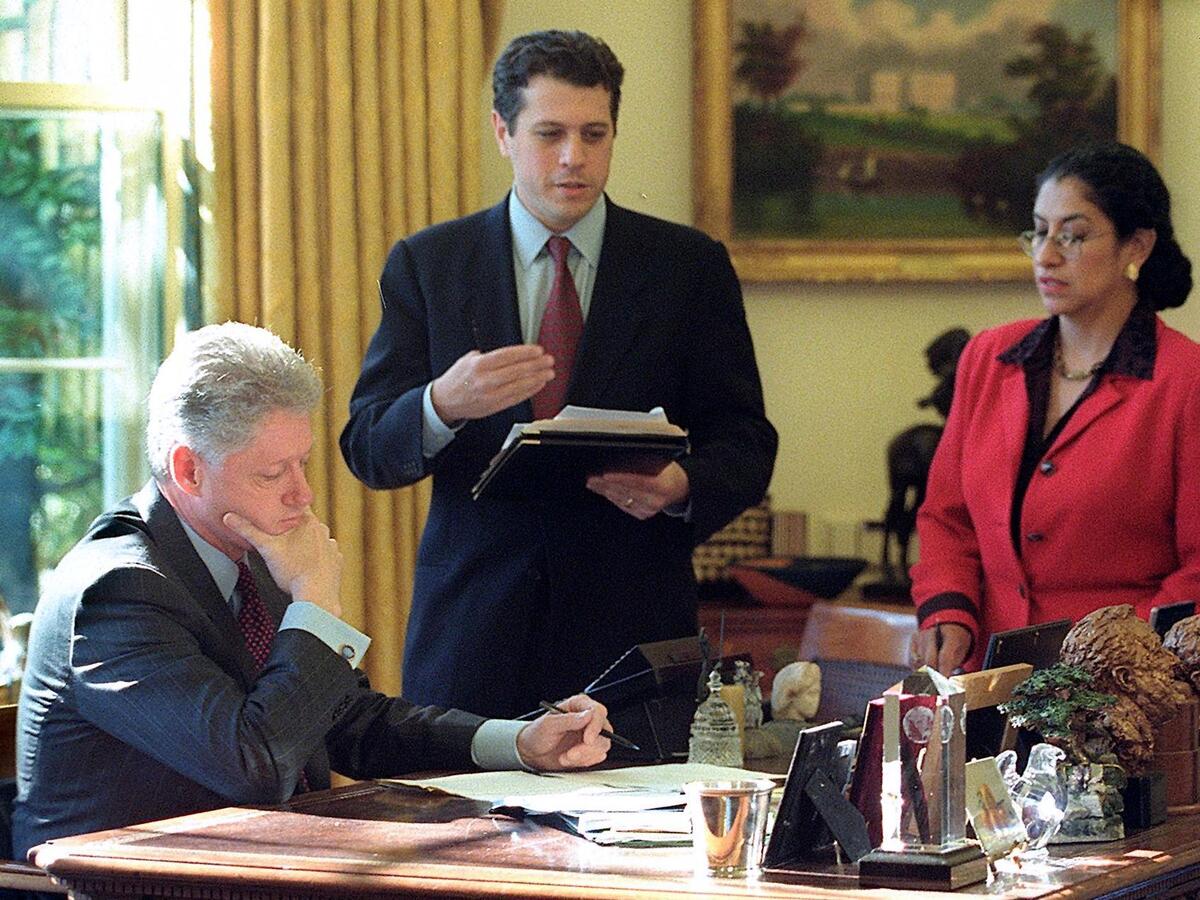 President Clinton goes over his 1999 State of the Union speech with speechwriter Michael Waldman and deputy chief of staff Maria Echaveste.

If Trump delivers the speech his White House has previewed, there could be awkward moments as Democrats who sought to remove him from office and others running to replace him sit and listen as he delivers the themes of his reelection campaign to a national television audience.

Trump will deliver his speech just feet away from House Speaker Nancy Pelosi, looking out on a chamber full of senators who will serve as jurors in his trial. The House impeachment managers who spent hours arguing passionately for his conviction will be there, too.

There was awkwardness in 1999, too. Michael Waldman, then the director of speechwriting for Clinton, described the event as "a truly miserable experience" for many of the Republican senators. "They had to adjourn the trial and trudge over to the House chamber and sit there while Bill Clinton got up to the rostrum and gave an ebullient, confident, even visionary State of the Union speech on national television," Waldman said.