Accessibility links
What We Know About The App That Delayed Iowa's Caucus Results Iowa Democratic Party officials said a new smartphone app designed to speed the results actually ended up delaying them. Last month, NPR reported on security and other concerns with the app. 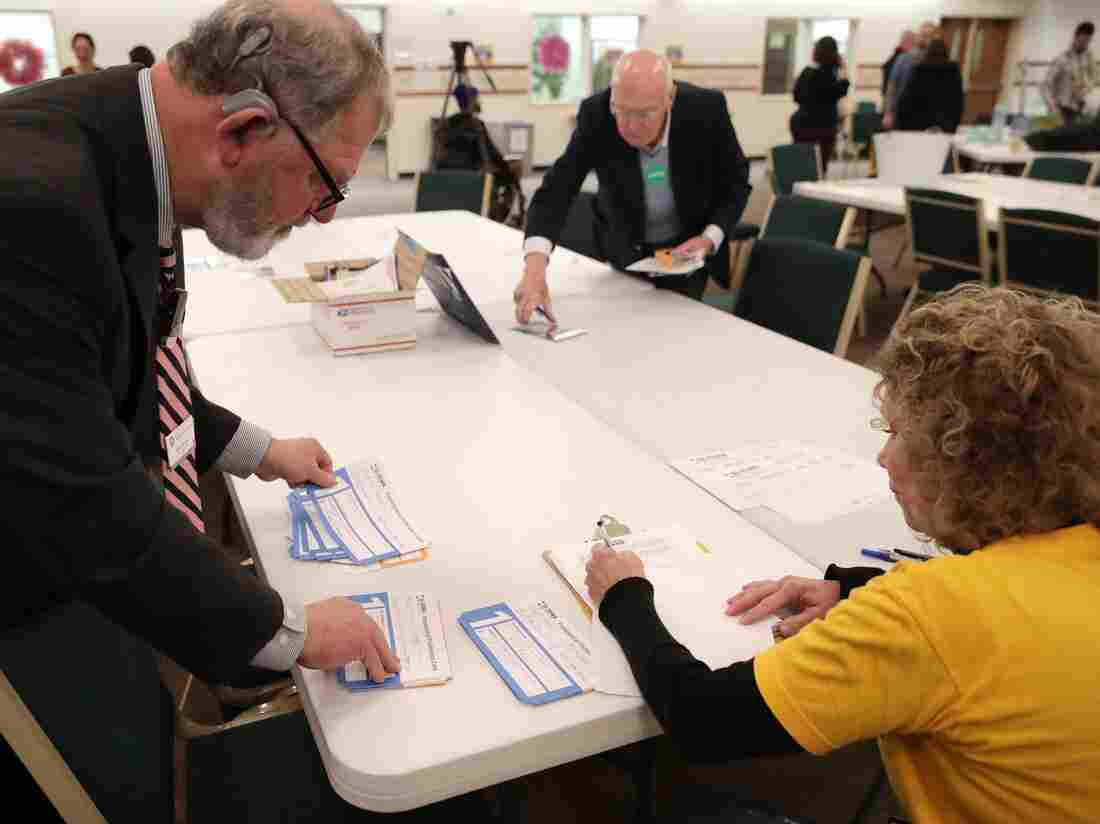 Presidential preference cards are counted at a caucus at West Des Moines Christian Church in Iowa on Monday. Problems with a smartphone app designed to report the caucus results ended up delaying an official count. Jim Bourg/Reuters hide caption 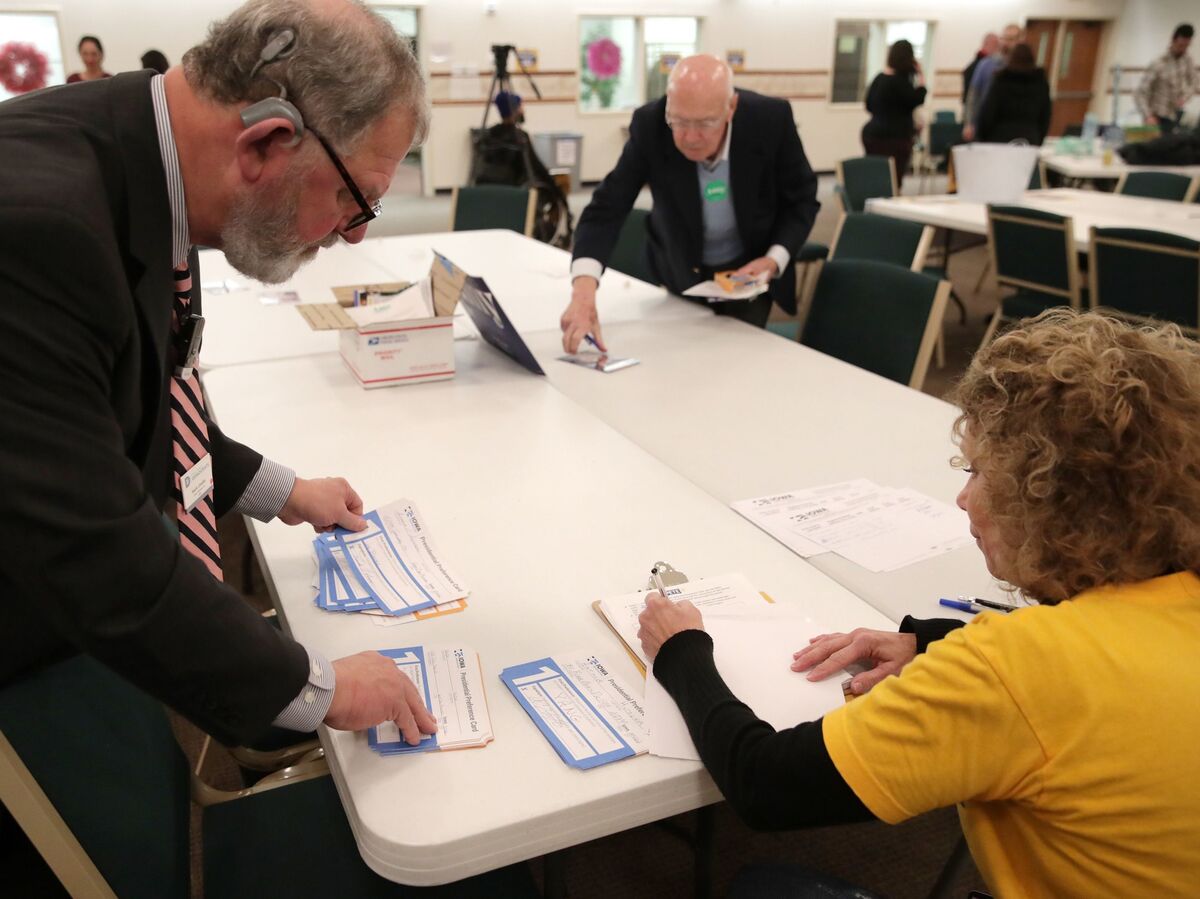 Presidential preference cards are counted at a caucus at West Des Moines Christian Church in Iowa on Monday. Problems with a smartphone app designed to report the caucus results ended up delaying an official count.

Iowa's Democrats had hoped that a new smartphone app designed to collect the results of its caucuses would let the party get the count out to the public more quickly.

But as of Tuesday afternoon, the state's Democratic Party was still struggling to report the outcome of Monday night's caucuses, blaming the delay on problems with that app. Finally, shortly after 5 p.m., the party began releasing results.

Shortly before releasing the results, Iowa Democratic Party chair Troy Price said Monday night's reporting mishap was "unacceptable" and offered an apology. He reiterated that his priority is the "accuracy and integrity" of the results.

DNC Chairman Tom Perez said in a statement Tuesday evening that the issue "should never happen again." He said the app would not be used during the primary election process and that the vendor "must provide absolute transparent accounting of what went wrong."

Shadow Inc., the company that developed the app for the party, apologized for the delay in a series of tweets Tuesday afternoon.

"We sincerely regret the delay in the reporting of the results of last night's Iowa caucuses and the uncertainty it has caused to the candidates, their campaigns, and Democratic caucus-goers," the company said.

"As the Iowa Democratic Party has confirmed, the underlying data and collection process via Shadow's mobile caucus app was sound and accurate, but our process to transmit that caucus results data generated via the app to the IDP was not," Shadow added.

The company said that it will "apply the lessons learned in the future" and that it has "already corrected the underlying technology issue. We take these issues very seriously, and are committed to improving and evolving to support the Democratic Party's goal of modernizing its election processes."

As the Iowa Democratic Party has confirmed, the underlying data and collection process via Shadow’s mobile caucus app was sound and accurate, but our process to transmit that caucus results data generated via the app to the IDP was not.

The Iowa Democratic Party said it has determined "with certainty" that "the underlying data" via its new app "was sound." In a statement Tuesday morning, Price said the app was recording data accurately, but "it was reporting out only partial data" because of a "coding issue in the reporting system."

Computer experts and caucus chairs said there was not enough training on using the app before Monday's caucuses, which are chaotic enough as it is.

"It appears in this case that the app was never really tested in a manner which came close to approximating the real mess of an election," Doug Jones, a computer science professor at the University of Iowa and a former caucus precinct leader, told NPR on Tuesday.

"Caucus chairs, in many cases, apparently were attempting to download and install the app on their phones on caucus night," he said. "That's extraordinarily difficult to do that kind of thing under pressure." 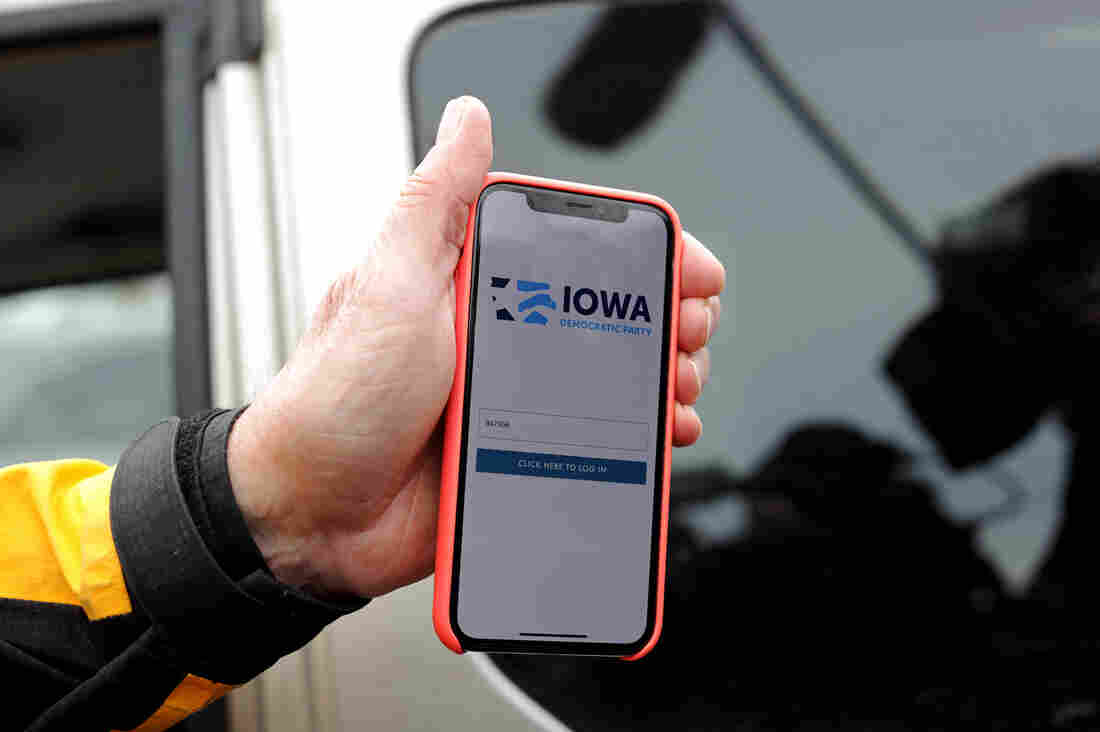 Des Moines City Councilman and a precinct chair Carl Voss shows the app that was used for caucus results reporting on his smartphone after he unsuccessfully attempted to drop off a caucus results packet from Precinct 55 at the Iowa Democratic Party headquarters on Tuesday in Des Moines, Iowa. Alex Wong/Getty Images hide caption 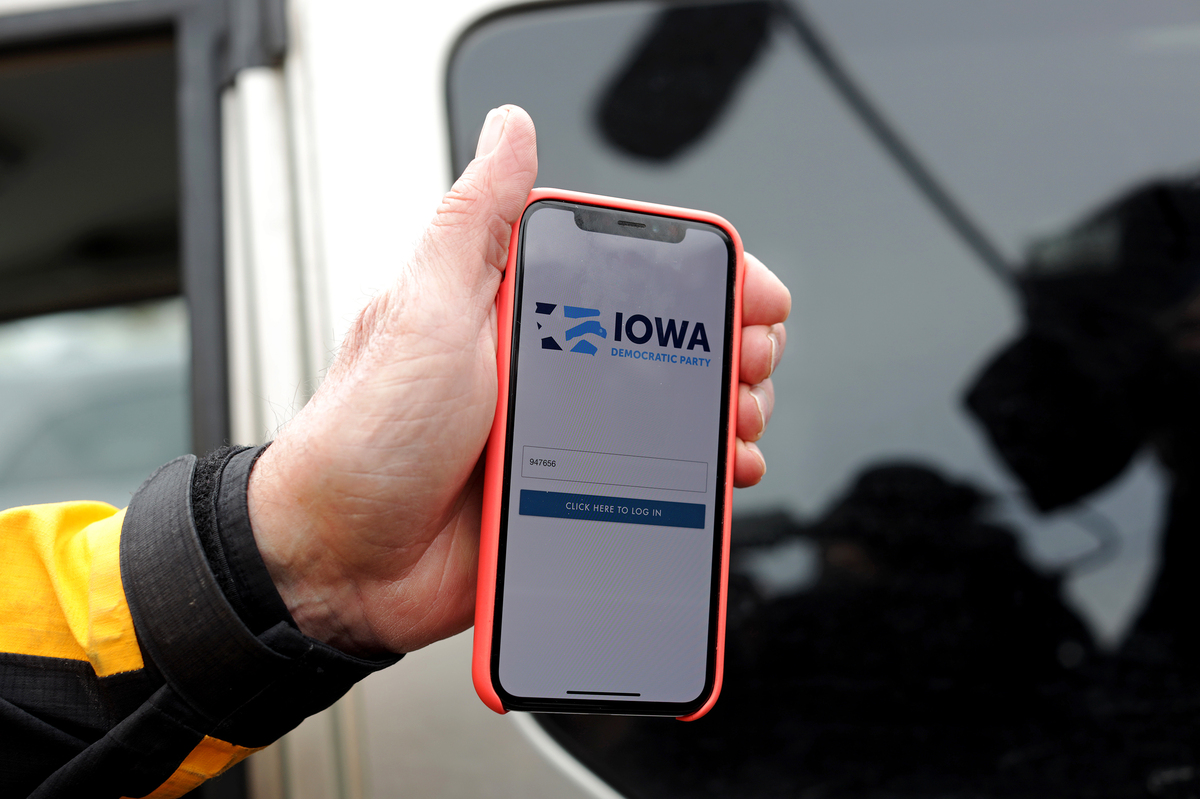 Des Moines City Councilman and a precinct chair Carl Voss shows the app that was used for caucus results reporting on his smartphone after he unsuccessfully attempted to drop off a caucus results packet from Precinct 55 at the Iowa Democratic Party headquarters on Tuesday in Des Moines, Iowa.

A report by NPR and Iowa Public Radio last month raised several concerns about the app. Cybersecurity experts interviewed by NPR said the party's decision to withhold the technical details of its app made it hard to have complete confidence in it.

"Drawing the blinds on the process leaves us, in the public, in a position where we can't even assess the competence of the people doing something on our behalf," Jones, the computer science professor, said then.

At the time, Price said he was confident in the party's contingency planning.

A spokesman for the Department of Homeland Security's cybersecurity agency said, "At this time, we have no reporting of any malicious cyberactivity. We encourage our election partners to build resilience into their planning and execution procedures, to prepare for issues that may come up during election processes."

Sen. Mark Warner, D-Va., vice chairman of the Senate Select Committee on Intelligence, said, "The continuing chaos in Iowa is illustrative of our overall failure to take sufficient steps to protect the integrity of our election systems."

But as NPR and Iowa Public Radio reported in January, there were also concerns about a lag in the adoption of technology in some rural parts of Iowa.

"At least everybody with smartphones is gonna [use the app], I know that," said Gary Gelner, who chairs the Hancock County Democratic Party in north central Iowa. "You'd be surprised how many people up here got the old flip cellphones."

The Iowa Democratic Party paid Shadow, the app developer, a total of $63,183.91 in "professional fees" in November and December, according to a campaign finance report filed by the party in January.

Shadow's website describes the company this way: "We are campaign and technology veterans who have built and implemented technology at Hillary for America, Obama for America, Google, Kiva, Apple, the AFL-CIO, and the DNC. Our passion is to create a permanent advantage for progressive campaigns and causes through technology."

Acronym, an anti-Trump superPAC, confirmed in a tweet that it had invested in Shadow. "We are reading confirmed reports of Shadow's work with the Iowa Democratic Party on Twitter, and we, like everybody else, are eagerly awaiting more information" from the party on what happened, Acronym said in a statement.

Here are the facts about @anotheracronym’s relationship to @ShadowIncHQ, an independent company ACRONYM invested in. We don’t have any information beyond the public statements the IDP has put out + like all of you, eagerly await learning what happened and who won the IA caucus. https://t.co/sWohZqZkPe

Multiple county chairs blamed the app for the delayed reporting of results.

Holly Christine Brown, the Asian/Pacific Islander caucus chair for the Iowa Democratic Party, said she was only appointed precinct chair last week and first saw the app on Friday evening.

"We were just given access to the app and told, 'Play around in there a little bit,' and that was about as much training as we got," Brown told NPR's Rachel Martin. "We were able to call in and ask questions, but there was no real training on the app."

Brown said the problems with Monday's caucuses will "absolutely" increase calls to change Iowa's system. "People are very upset about how this happened and how this played out," she said.

Elesha Gayman, the Scott County Democratic chair, said the app was difficult to use for older and younger people alike.

"It was unique; it's not something you can download in the app store," she said. "You actually had to fill out a form. In addition to that, you got a series of PIN numbers. And so, yeah, there was a lot of layers and I think that absolutely mucked it up. Anecdotally, a few of the people I do know who used the app successfully were younger people. But I do know some young people that also had troubles, just so many layers."

Marjie Foster, the Democratic chair of Decatur County, said her caucus "had absolutely no glitches with the app. Our app process worked great. Our chair was very well-prepared. He had trained and tested, and he was on target with it. So we had no issues with the app."

"Things didn't work out right," said Courtney, who said he tried to call in the results for several hours but couldn't get through because the number was "constantly busy."

Instead, Courtney said, he went home and planned to call and report his precinct's results in the morning.

"[The Iowa Democratic Party] made it seem like this was going to work fine. They tested it, tested it," he said. "I'm old enough, I was skeptical, the whole thing, but I thought it would be better than it is. There have been problems. Little problems with it, right, all along. Guess I wasn't surprised."

Early Tuesday afternoon, Iowa Secretary of State Paul Pate said in a statement that the accuracy of the vote totals "is much more important than the timeliness of releasing the results. I am glad to hear they have a paper trail for their votes, just as we use paper ballots in all official elections in the State of Iowa. I support [the Iowa Democratic Party] while they take their time and conduct checks and balances to ensure the accuracy and integrity of the votes."

The Democratic Party in Nevada, another caucus state, pledged Tuesday to avoid the problems Iowa saw.

"NV Dems can confidently say that what happened in the Iowa caucus last night will not happen in Nevada on February 22nd," the party said in a statement. "We will not be employing the same app or vendor used in the Iowa caucus. We had already developed a series of backups and redundant reporting systems, and are currently evaluating the best path forward."

NPR's Pam Fessler and Miles Parks contributed to this report.

A previous version of this story incorrectly said Holly Christine Brown was appointed last week as the Asian/Pacific Islander caucus chair for the Iowa Democratic Party. Brown actually has been chair of her caucus for over a year but was appointed as a precinct chair last week.