Accessibility links
'Wind Of Madness' Is Sweeping Earth, U.N. Head Guterres Says Antonio Guterres laid out a sobering view of the current state of the world Tuesday, saying, "A wind of madness is sweeping the globe" as instability erupts into violence. 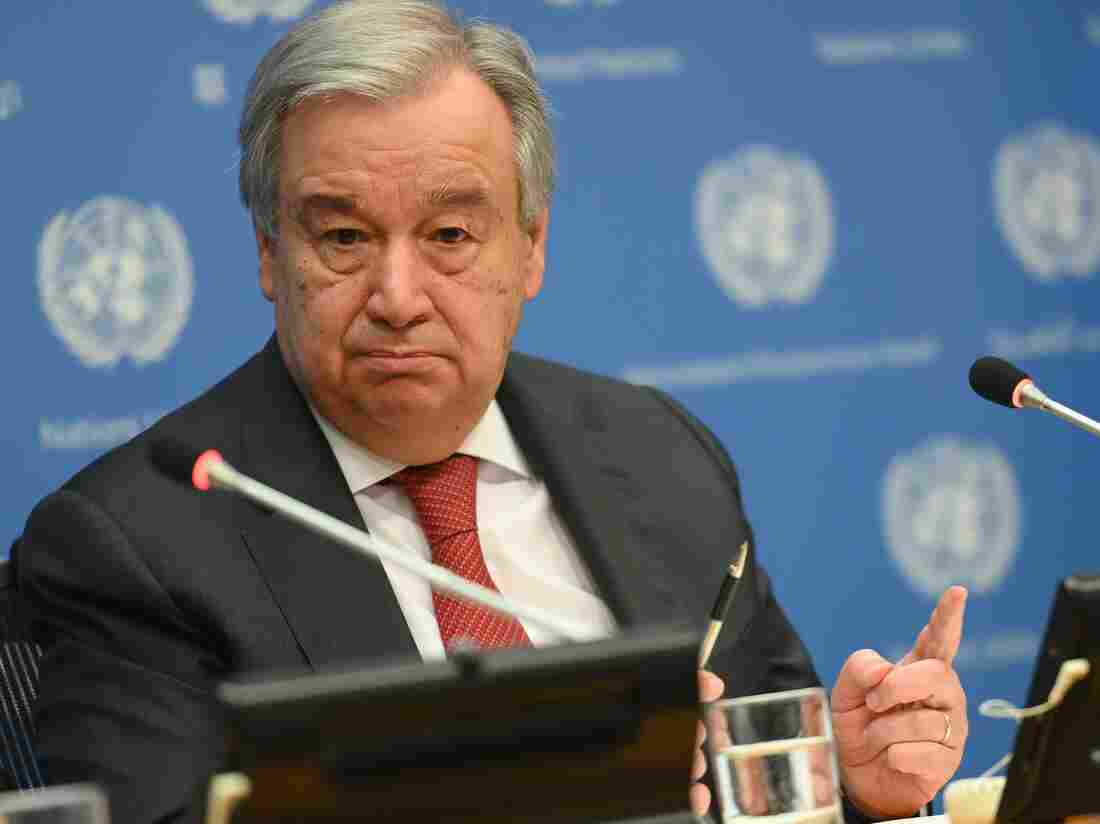 "Escalation is back," U.N. Secretary-General Antonio Guterres warned Tuesday. Laying out his goals for 2020, Guterres said he wants to break vicious dynamics and create a "virtuous circle" that leads to progress. Angela Weiss/AFP via Getty Images hide caption 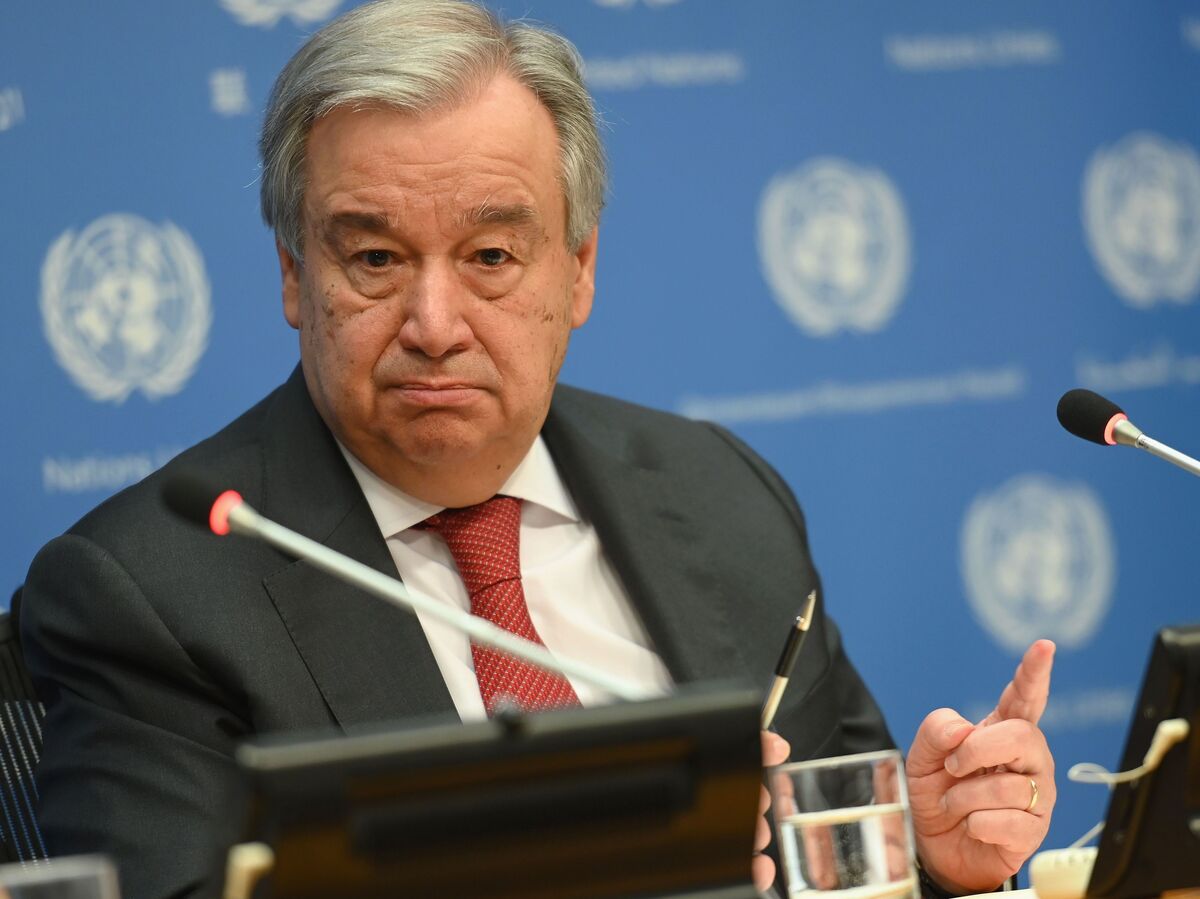 "Escalation is back," U.N. Secretary-General Antonio Guterres warned Tuesday. Laying out his goals for 2020, Guterres said he wants to break vicious dynamics and create a "virtuous circle" that leads to progress.

U.N. Secretary-General Antonio Guterres laid out a sobering view of the current state of the world Tuesday, saying that "a wind of madness is sweeping the globe" as instability erupts into unpredictable and violent conflicts. The problems are made even worse, he said, by faltering economic situations and countries that disrespect U.N. Security Council resolutions "before the ink is dry."

"Escalation is back," Guterres said, referring to violence that has flared in Yemen, Libya and elsewhere. And in the midst of problems between rival groups, the U.N. chief said, the world is also facing the effects of a worsening climate crisis, citing the historic wildfires that brought disaster to Australia and record high temperatures in the world's oceans.

Guterres made the remarks Tuesday morning in a speech laying out his priorities for the new year. His chief goal, he said, will be to "break the vicious circles of suffering and conflict and to push for a strong surge of diplomacy for peace."

Noting that 2020 will bring the U.N.'s 75th anniversary, he called on its member nations to listen to "conversations in every corner of the world about the future we want."

"There is no doubt that people have much to say," Guterres said, adding, "The disquiet in streets and squares across the world is proof that people want to be heard. They want world leaders to answer their anxieties with effective action."

The current state of the world is defined by "cascading challenges" and "vicious circles" that threaten peace and security, the U.N. head said. And the conflicts that emerge, he added, are "longer, more lethal and more likely to erupt in the first place."

The precarious circumstances have slammed the door on recent progress toward comity and peace, Guterres said. He detailed that sentiment in a striking portion of his speech that was transcribed by the office of his spokesperson:

"Tensions were of course high as the last year ended, but we were moving in the right direction in a number of hotspots. We were seeing signs of de-escalation and some measure of progress.

"I have spoken recently about winds of hope. But today a wind of madness is sweeping the globe.

"From Libya to Yemen to Syria and beyond – escalation is back. Arms are flowing and offensives are increasing.

"All situations are different but there is a feeling of growing instability and hair-trigger tensions, which makes everything far more unpredictable and uncontrollable, with a heightened risk of miscalculation.

"Meanwhile, Security Council resolutions are being disrespected even before the ink is dry.

"As we can see, problems feed each other.

"As instability rises, investment dries up, and development cycles down.

"And as governance grows weak, terrorists get stronger, seizing on the [vacuum]."

Devoting a large share of his speech to worsening climate conditions, Guterres noted that the world's ocean temperatures and the mean sea level had both reached new record highs.

"Scientists tell us that ocean temperatures are now rising at the equivalent of five Hiroshima bombs a second," he said.

Humanity faces other challenges on land, the U.N. head said, listing shrinking permafrost and thawing tundra as two factors that will send "vast amounts" of methane — a greenhouse gas — into the atmosphere.

Applying his central metaphor of a vicious circle to the climate, Guterres said the smoke from the massive fires in Australia "is now itself a literal vicious circle – circling the globe, releasing the equivalent of as much as six months of the country's total carbon emissions in 2018."

After delivering that dire summary of the world's state of affairs, Guterres held out a ray of hope.

"There is some good news," he said, adding that more people are now aware of the risks posed by climate change and noting that governments and the private sector are changing their policies and investing money to protect the environment.

Guterres also called on the U.N.'s member nations to "break the vicious circle of poverty and inequality and to shape a fair globalization leaving no one behind." And he stressed the importance of sustainable development to prevent big problems from growing even larger.

Listing priorities such as improved education, gender equality and health care, Guterres said that making progress on even one goal can have a ripple effect. It could create, he said, "the virtuous circle we know is possible and that can point the way toward growth and prosperity for all."