Accessibility links
Kirk Douglas Dies At 103; Known As Hollywood's Tough Guy And Spartacus Douglas was often cast as a troubled tough guy in films, most famously as a rebellious Roman slave named Spartacus. Off-screen, he was devoted to family and to humanitarian causes.

Kirk Douglas, the self-described "ragman's son" who became a global Hollywood superstar in the 1950s and '60s, died on Wednesday. He was 103. Douglas was often cast as a troubled tough guy in films, most famously as a rebellious Roman slave named Spartacus. Off-screen, he was devoted to family and to humanitarian causes.

His son Michael Douglas announced the actor's death: "To the world he was a legend. ... But to me and my brothers Joel and Peter he was simply Dad."

"Kirk's life was well lived, and he leaves a legacy in film that will endure for generations to come, and a history as a renowned philanthropist who worked to aid the public and bring peace to the planet," Michael Douglas wrote.

Kirk Douglas was a classic Hollywood alpha male, with his cleft chin, his gritty voice and a set to his jaw that made him seem to be talking through clenched teeth. He made a conscious choice to go his own way by playing men who went theirs. In Stanley Kubrick's World War I epic, Paths of Glory, Douglas played the principled Colonel Dax, stepping into an iconic role of the good man fighting the establishment.

But Douglas seemed almost more comfortable playing what he liked to call "tough sons of bitches," or flawed men who were, one way or another, gaming the system. Two of his earliest title roles, as the backstabbing boxer in Champion and the self-destructive cornetist in Young Man With a Horn, portrayed stars who turn into heels just as the public embraces them.

Before long, Douglas had developed that reputation himself. Looking back in his memoirs, Douglas described his younger self as "egotistical and ambitious" and claimed not to like him very much. But his best performances, such as his portrayal of an abrasive but driven Vincent van Gogh in Lust for Life, were memorably electric.

For more than two decades in Hollywood, Douglas "cast a giant shadow," as one of his titles proclaimed, playing two or even three starring roles each year. When he was not cast for Ben-Hur, losing the role to Charlton Heston, Douglas countered the loss months later with his own Roman epic, Spartacus. Douglas produced the film and starred as the title character who famously revolted against his Roman captors. 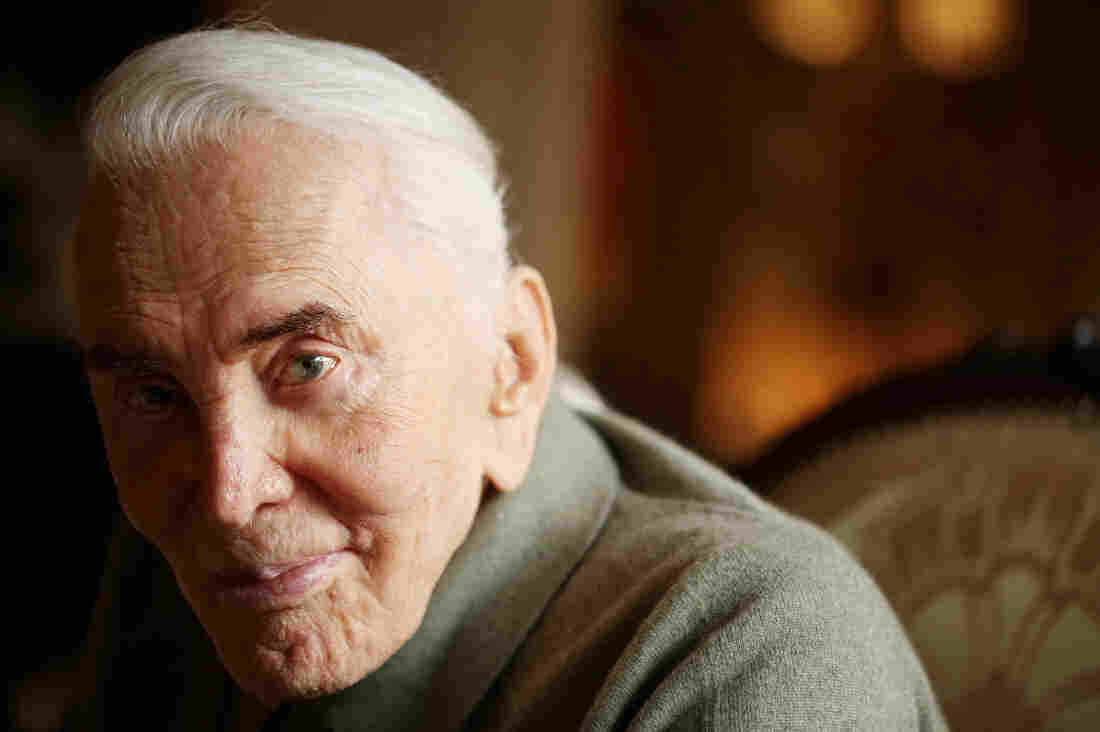 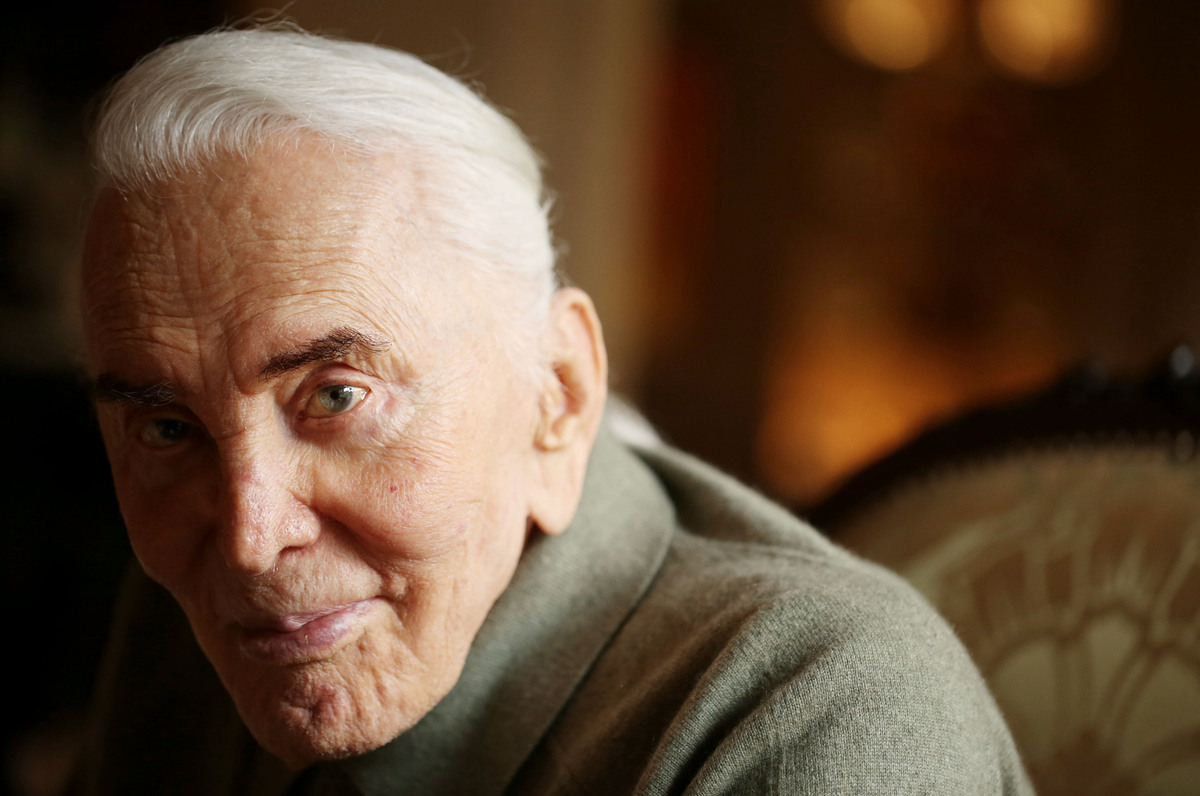 Douglas poses for a portrait in Beverly Hills, Calif., in December 2014.

Off-screen, Douglas also led an open revolt, against Hollywood's blacklist. The communist witch hunts of the 1950s had destroyed many careers, including that of Spartacus screenwriter Dalton Trumbo, who had written for years under an alias. Douglas was disgusted by this hypocrisy, and saying, "To hell with it," he put Trumbo's real name in the film credits.

When Spartacus became a hit, the blacklist was effectively finished. More than three decades later, speaking with NPR's Susan Stamberg, Douglas reflected upon this impulsive but life-defining decision: "Sometimes I often think that if I were much older, would I still have done it? Anyhow, I did it. It was an impulsive thing. I'm proud of it. I think it's one of the good things that I've done in life."

Douglas the bold blacklist-breaker had come a long way, and from very humble beginnings. Born Issur Danielovitch in New York to illiterate, desperately poor Russian Jewish parents, he was the only boy among seven siblings. He would later tell his own children that they didn't have his "advantage of being born into abject poverty."

From an early age, that "advantage" forced Douglas to put himself out there with the public, and he worked odd jobs, scrounged for food and talked his way into college and loans. Acting school and a stint in the Navy followed college, as well as minor success on Broadway using the new stage name that he would keep for the rest of his career. Then Hollywood beckoned, and within four years, Douglas had made eight films, had established his persona as a tough guy and had earned the first of his three Oscar nominations as a barrel-chested prizefighter in Champion.

True to the roles he liked to play, success did not make Douglas a "nice guy." Though married, he had affairs with actresses Rita Hayworth, Marlene Dietrich and Ava Gardner. He was mostly an absentee father to his first two sons; frequently he broke studio contracts and feuded with directors. In 1964, he said, "I am probably the most disliked actor in Hollywood, and I feel pretty good about it, because that's me." 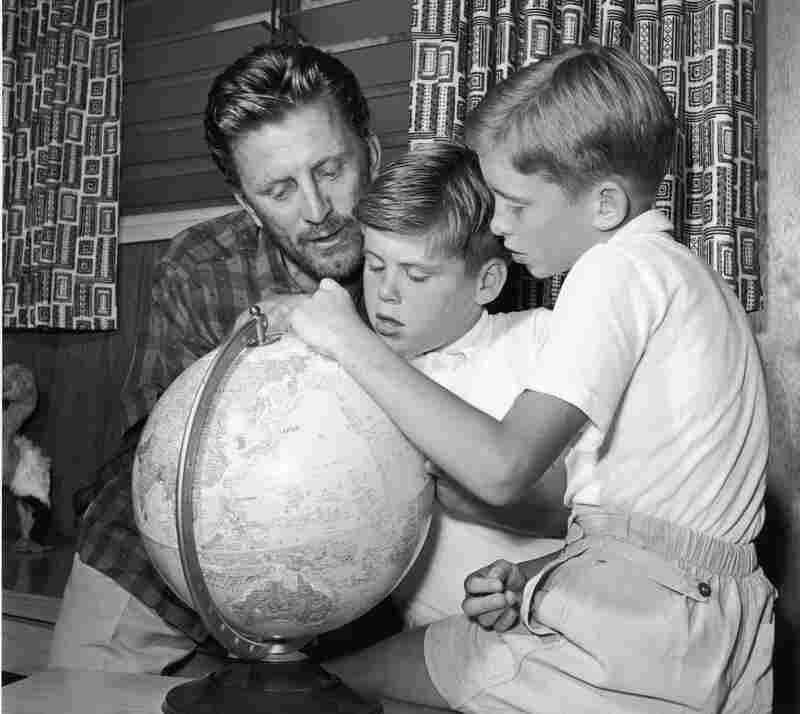 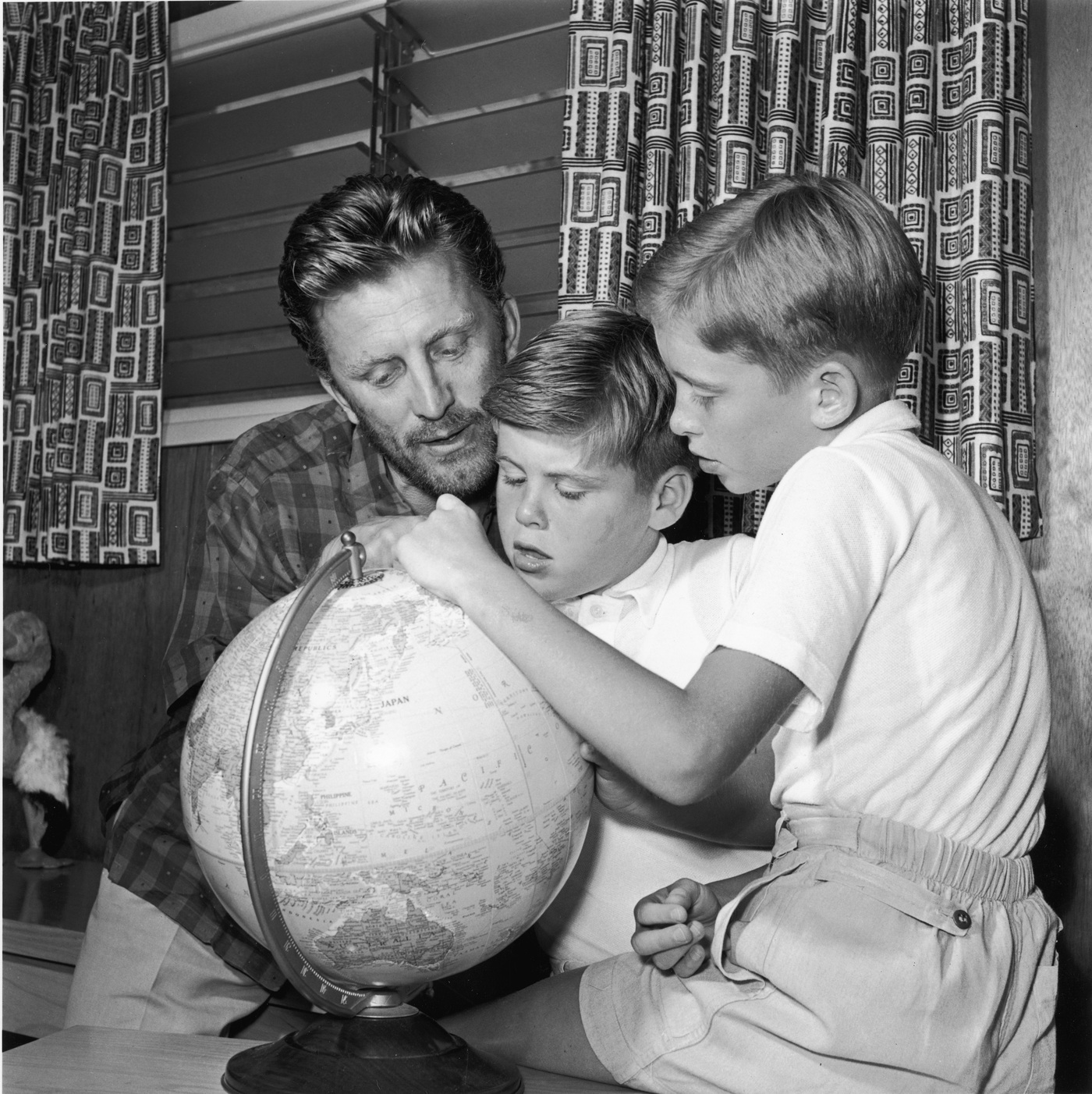 Douglas with his eldest sons, Joel (center) and Michael, circa 1956.

The 1960s were his glory days as he starred in hit after hit. Douglas battled a presidential overthrow in Seven Days in May and was torn between Faye Dunaway and Deborah Kerr in The Arrangement. He played gunslingers, lawyers, admirals, doctors and con men, and he worked steadily through the next two decades.

When the tough guy schtick got old, Douglas turned to comedy and mocked it in a film called Tough Guys, in which he starred with his friend and frequent co-star Burt Lancaster. Not even a helicopter crash in 1991, when he was 74, slowed Douglas down — though the fact that a pilot and another passenger had died, he told NPR, did change his worldview. "It makes you think about other people," Douglas said. "I think that you have to — as you get old in life and as you mature — you have to be aware more of the outside world and other people."

Just a year after that 1994 interview, a stroke left him almost entirely unable to speak. He had thoughts of suicide. He wrote: "What does an actor do who can't talk? ... Wait for silent pictures to come back?"

Douglas' book My Stroke of Luck describes how he recovered by reaching out to others and by rediscovering the Judaism he'd been neglecting for 60 years.

A Premature Obituary Can Be A Sweet — If Strange — Gift

Douglas and his wife Anne Buydens would spend the next decade and millions of dollars fixing up playgrounds in California — more than 400 altogether. Every time he reopened one, he slid down its slide, joking after one such slide at age 92: "Every dedication I risk my life."

In between the odd acting jobs that came his way, Douglas found time to write memoirs, novels and children's books. He also became one of the world's oldest bloggers at 92. And at 94, he returned to the stage, delighting audiences at Culver City's Kirk Douglas Theatre with an autobiographical solo show called Before I Forget.

Douglas was the last great movie star of his generation. He outlived the likes of John Wayne, Gary Cooper, Henry Fonda, Cary Grant, Charlton Heston and his buddy Burt Lancaster — and younger audiences probably know him better as Michael Douglas' father than as a star in his own right. But he was a star and, for a long time, among the brightest in the Hollywood firmament.