Accessibility links
Review: 'The Lost Book Of Adana Moreau,' By Michael Zapata Michael Zapata's debut novel is a straightforward literary mystery on the surface — but his simple tale of a lost sci-fi manuscript goes deep on themes of family, displacement and mythology. 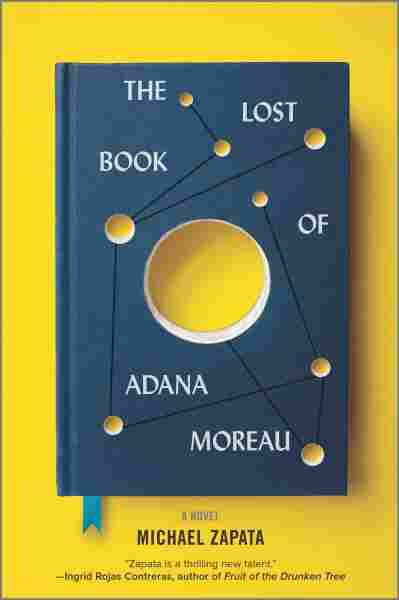 The Lost Book of Adana Moreau

Adana Moreau — a young, orphaned, Dominican woman who emigrates to New Orleans in the 1910s — experiences this realization early in Michael Zapata's debut, The Lost Book of Adana Moreau. It's an epiphany that will echo throughout the novel in multiple dimensions. Smart and heart-piercing, Lost Book is a story of displacement, erasure, identity, mythology, and the ability of literature to simultaneously express and transcend our lives — not to mention reality.

Zapata tackles huge feelings and ideas in Lost Book, but he makes it look effortless. On the surface, it's a straightforward literary mystery: In the early 2000s, Saul Drower is an Israeli-born Jew who works in a Chicago hotel, and he receives a package that his recently deceased grandfather had been trying to get into the hands of a physicist in Chile named Maxwell Moreau. Saul opens the package to find an unpublished manuscript from almost a hundred years earlier, a hallucinatory science-fiction novel titled A Model Earth that might fit on the shelf perfectly between the works of H. P. Lovecraft and Italo Calvino. It was written by an author he'd never heard of named Adana Moreau, the mother of the now-elderly Maxwell. Saul, an avid science-fiction reader, and his old friend Javier embark on an investigation into the manuscript — and its connection to Lost City, Adana's first novel, published by a small press in 1929 but ignored over the decades despite being a literary sensation when it first appeared.

You'll Float Away On The Warm Waters Of 'The Starless Sea'

Lost City and A Model Earth, however, aren't the only books that Zapata invents. There's an entire library's worth of imaginary books lurking within Lost Book, a ghostly bibliography that would have made Jose Luis Borges proud. Saul's grandfather penned a peculiar biography called The Mathematician and the War about Archimedes; Javier's Ecuadorian great-uncle wrote notebooks of horrific poetry purported to drive the reader mad; and Maxwell authored The Hidden Multitude, a controversial book about multiple versions of the universe that's accrued a cult following similar to that of his mother's Lost City. Many more follow. Zapata's glee in devising this nonexistent literary canon is matched only by his love of working real-life literature into his story. Everything from the legendary pulp magazine Weird Tales to the mind-bending novels of Philip K. Dick factor into Lost Book, and Zapata masterfully crafts a gripping, lyrical narrative full of eerie parallels and profound connections.

'Lost City' is wonderfully clever and erudite, but it all serves a deeper purpose. Zapata's multilayered concepts ... underscore his more immediate themes of family, diaspora, and the sway that patterns hold over our lives.

Lost City is wonderfully clever and erudite, but it all serves a deeper purpose. Zapata's multilayered concepts — most prominently, the theory of multiple worlds expounded by Maxwell — underscore his more immediate themes of family, diaspora, and the sway that patterns hold over our lives. Adana and Saul are both orphans of war; Zapata focuses the realities of immigration and exile through the mythic remove of speculative fiction as well as the fantastic notions of quantum physics. The apocalyptic climax of Lost Book dovetails with the onset of Hurricane Katrina, and although there's nothing new in that plot device, Zapata uses it in a unique way: "The city of New Orleans is a spaceship," he writes, and his portrayal of Adana's adopted hometown reflects both the richness and tragedy of America.