Accessibility links
The Paradox Of Yasiin Bey's 'Negus,' A Rap Album Trapped In An Art Museum The latest album by the rapper formerly known as Mos Def will be heard by very few people — a fact that represents everything fascinating and frustrating about his last decade.

The Paradox Of Yasiin Bey's 'Negus,' A Rap Album Trapped In An Art Museum

The Paradox Of Yasiin Bey's 'Negus,' A Rap Album Trapped In An Art Museum 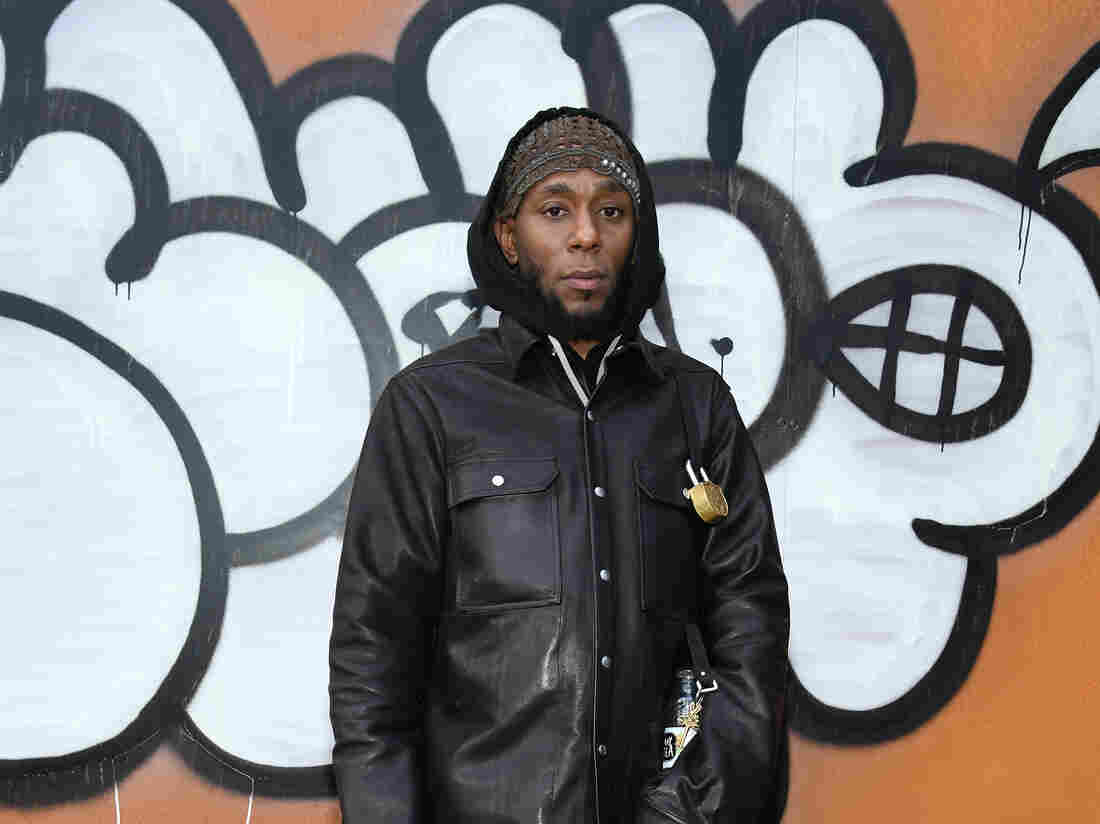 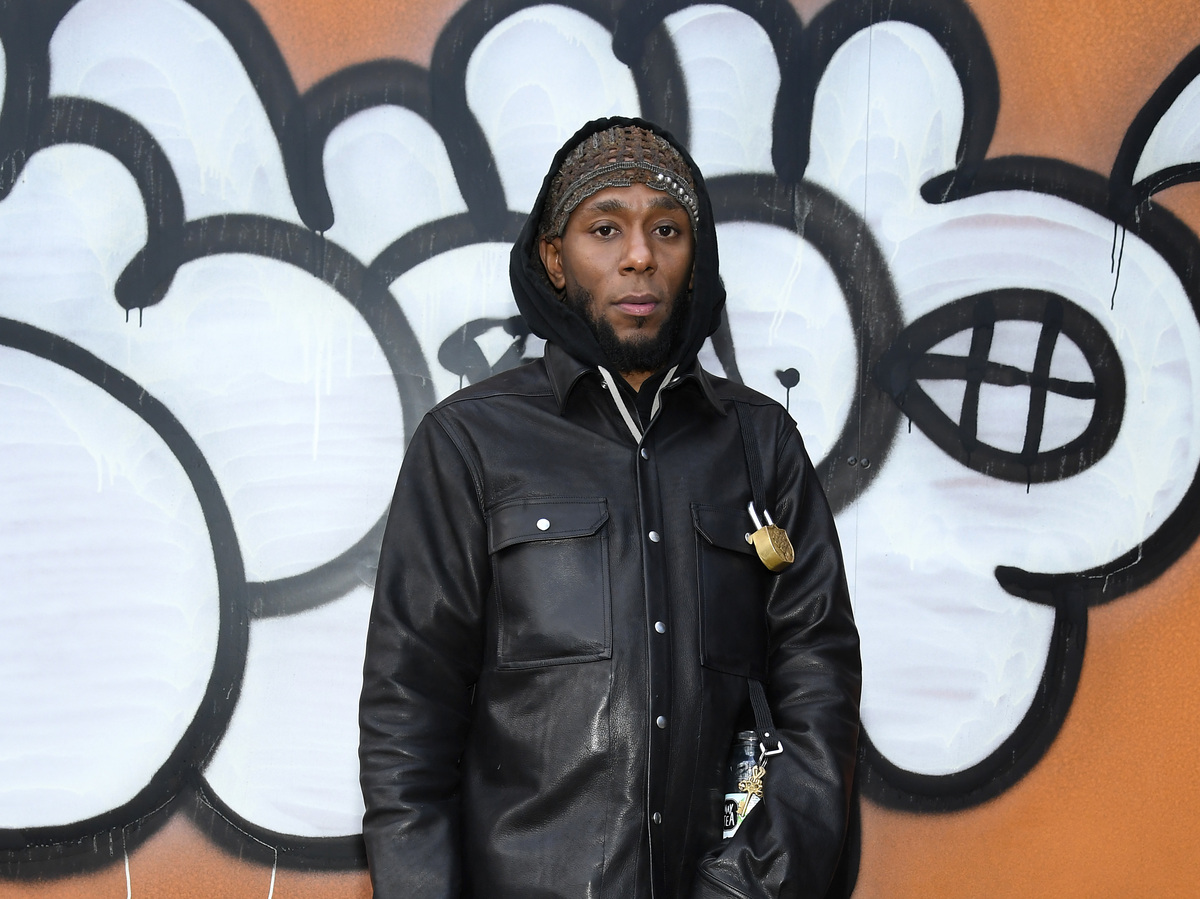 The night of the 2006 MTV Video Music Awards, Yasiin Bey was behind bars.

Earlier that evening, fans who wanted a glimpse of Justin Timberlake, T.I. or Avenged Sevenfold had gathered on the sidewalk around the entrance of Radio City Music Hall. It was Aug. 31, almost exactly a year since Hurricane Katrina had touched down in New Orleans. Bey, then still known as Mos Def, wanted to send a message to the Bush administration, as well as the celebrities cozying up inside the venue, about their response to the disaster.

Around 10 p.m., Bey pulled up to Radio City in a flatbed truck decked out with a stage, lights and sound. He broke into "Katrina Klap," a remix of New Orleans group UTP's "Nolia Clap" that Bey had recorded and leaked days after the disaster. ("Like where the f*** is Sir Bono and his famous friends now," goes a pointed line.) NYPD stormed the stage, taking Bey and members of his crew into custody before he could finish the song. But the moment, captured on video, went as viral among rap fans as it was possible to go in YouTube's second year.

On his 1999 debut, Black on Both Sides, Bey declared: "Speech is my hammer, bang the world into shape." In many ways he followed up on that promise, folding a radical pan-African worldview into records that have sold millions, but the music he's released is only half the story. More and more over the past two decades, the artist who established himself as one of rap's foremost auteurs has also become one of its biggest contrarians, committed to working outside of established systems even when it means letting presentation overshadow the music.

Bey's third album, True Magic, trickled out a few months after the VMA stunt. A limp and listless effort rumored to be a grudging fulfillment of his contract with Geffen Records, it first leaked online, then arrived on select shelves in a clear plastic case with no liner notes. Critics hated it, but some fans took heart in knowing he was free to take his next step as he saw fit. The Ecstatic, released on indie label Downtown Records in 2009, felt like an exciting new chapter, a muggy caravan crawl through flea markets and European dance clubs, assembly lines and Iraqi soil. But there were hints the rapper was still feeling disillusioned; during promotion for the album, he spoke with labelmate Spank Rock for Interview magazine about the state of the art:

"It's machine-like how things are run now in hip-hop, and my ambitions are different. I'm not knocking it, but I have my mind on another type of prize. There's another way to achieve that [success] too. There's another way with less congestion, less emissions. I've been spending my time building that road. You have to look for validation from yourself. Who wants to be the outcast? But you have to commit to who you are. Also, a lot of it is the manifestation of society and colonialism in the industry. Radiohead can be as avant-garde as they want and still have pop success, but if you're black you have to surrender yourself to the flashing lights."

Over the next decade, he made headlines for reasons beyond music. He was filmed being strapped down and force-fed for a video calling attention to the practices used at Guantánamo Bay. He moved to Cape Town, was arrested for attempting to leave the country using a "world passport" and wound up detained for nearly a year. His appearances on wax were sparing: an A$AP Rocky feature here, a Kanye West collab there. Then, in January 2016, Bey announced on West's website that he was "retiring from the music recording industry as it is currently assembled today, and also Hollywood, effective immediately." In addition to a pair of collaborative releases, the message promised one more solo release, titled Negus in Natural Person.

Years later, that album has finally arrived. But unless you made a special trip to Brooklyn this winter, you may never hear it. 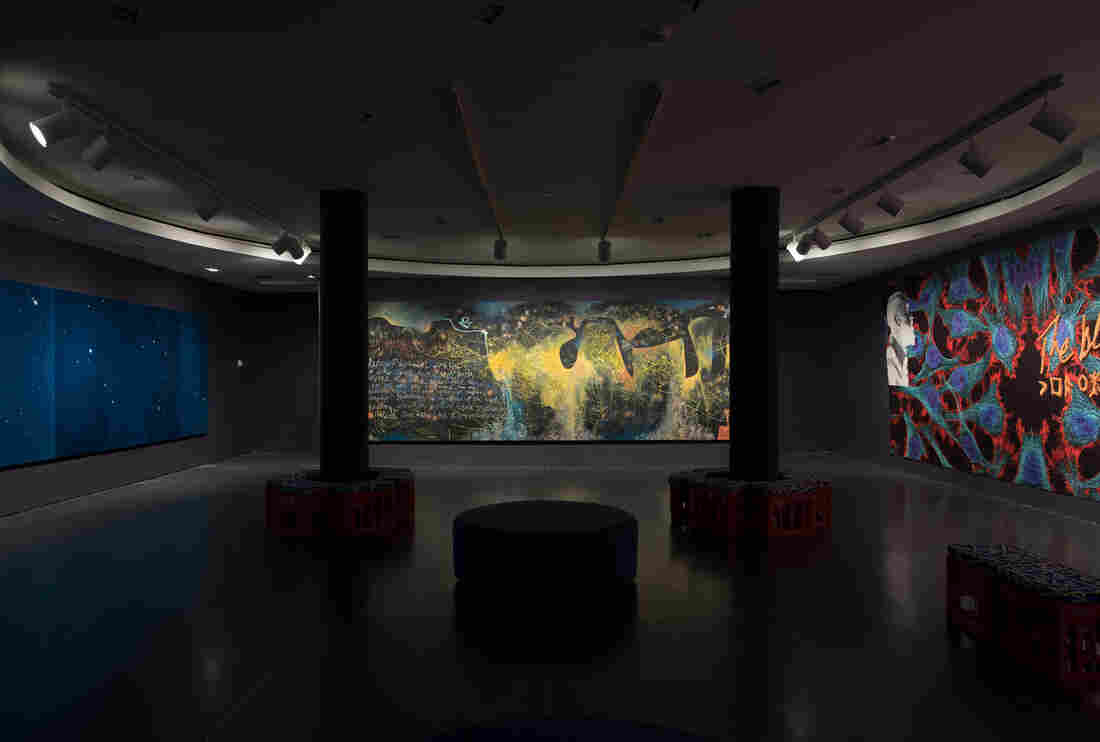 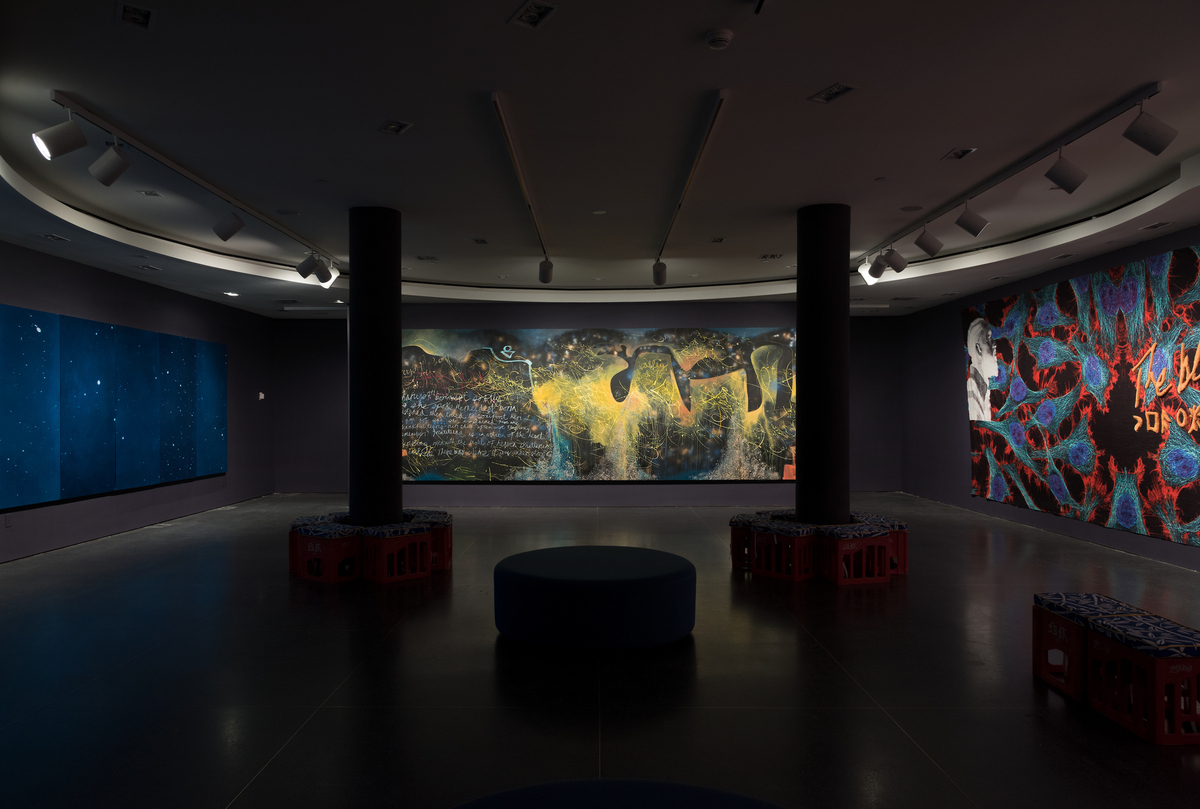 Shortened to simply Negus, the newest Yasiin Bey album lived for 10 weeks as an exclusive "listening installation" at the Brooklyn Museum, beginning Nov. 15, 2019. Tickets were $20 for adults, $25 on weekends. When I attended in early January, I and my fellow museumgoers locked our phones in magnetically sealed pouches and were given on-ear wireless headphones, which simultaneously played the 28-minute album once through, like a silent disco.

The music was only one component of a larger audiovisual exhibition, described as a celebration of figures who have "led noble lives." Those subjects included Henrietta Lacks, whose cancer cells, later used in life-saving medical research, were harvested without her consent; the murdered rapper Nipsey Hussle; and Alämayyähu Tewodros, a 19th-century Ethiopian prince displaced by a British raid. Compositions by the Ethiopian nun and pianist Emahoy Tsegué-Maryam Guèbrou played through the headphones as attendees entered the space, where seats and rugs were spread across the floor.

The walls were lined with works by Bey and visual artists José Parlá, Julie Mehretu and Ala Ebtekar, who all drew inspiration from listening to the album. The centerpiece was a sprawling, woven mural by Bey himself depicting Henrietta Lacks' cells, with text popping out in a bold orange scrawl: "The blood of Jesus Christ. The Crips of Jesus Christ. The Tribes of Jesus The Christ."

Especially given that its presentation makes repeat listens difficult, as a piece of music, Negus is challenging to say the least. It opens with a dark mist of electro drums, scraping synths and cryptic raps. There are moments of quiet poise: "Stay balanced on steady ground and broken banks," Bey raps in one passage, as chilling as he's ever sounded. Other moments are dissonant, confusing, bordering on plain bad.

Bey recorded these songs back in 2015, so it's surprising and rewarding when certain lines do break through that first-listen excitement, sounding as if they were written for the exhibit. On track two, composed of a Casio drum break and vampire organ, the line "I'm sorry, did I break your conversation?" made me blink and take note of my ritualistic trip to the museum that did sort of interrupt my day-to-day.

And maybe that's the real intent here. Bey told MSNBC in a recent interview that he isn't anti-streaming, but one can't help but interpret Negus as an act of rebellion against the dominant mode of listening. If CDs and LPs give the digital stuff we call music physical bodies, the Brooklyn Museum exhibit gave Negus the sense of being alive — complete with a finite lifespan, a one-of-a-kind appearance, an identifiable and tangible location. 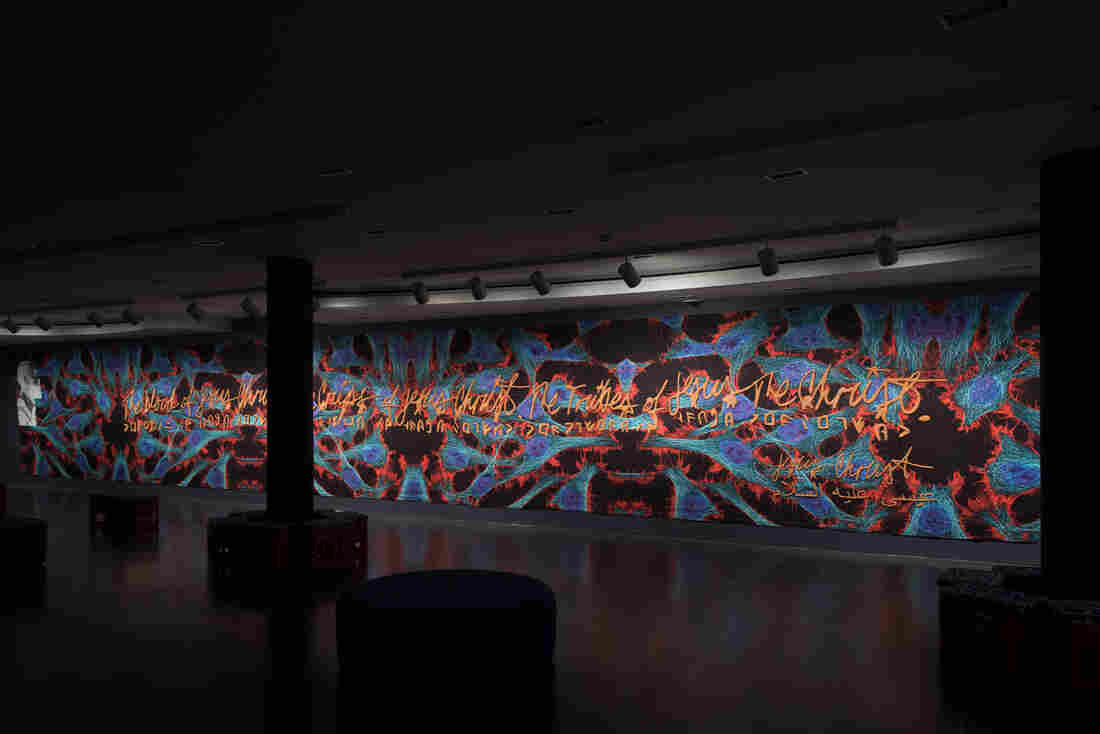 The novelty wasn't lost on the other attendees I spoke to. "I would play it at home, but I think I enjoyed it this way," said Burnell Greer. "If we could listen to it on our own, sure, it'd be nice," added Aaron Jackson, "but to be able to be in a room together, to occupy that space that the album tried to encompass — there was something about that that I would never get if I didn't have it this way."

Irrespective of how the music sounded, the way it was presented felt like a call to listen actively — to practice the kind of quiet, intense, intentional group listening that feels harder and harder to come by. On the other hand, Negus is still a Yasiin Bey album, unabashedly dense and political: "Polar cap Kool-Aid, world on fire," he chants on one song. "I found it a little frustrating," said attendee Nyantee Asherman. "I wanted to go back, I wanted to go forward, I wanted to pause." It's a work that demands repeat listens, which is a problem when you're paying a Williamsburg lunch for just one.

But on a more fundamental level, how political can a piece of art be when it's bottled up in a museum? When Bey first took off, his political ideas traveled because his music and his face were everywhere. Black on Both Sides was certified gold in four months. He stole scenes in Hollywood movies. That abbreviated VMA performance was seen by every rap fan with a pulse in '06. When his first album in a decade requires a pilgrimage just to listen to it once, it immediately loses much of its political potential, no matter how sincere its intent.

Yes, it feels like music is moving faster than most people can keep up with, and yes, information overload is a real and dangerous thing. To stand out in a sea of playlists is the goal of most musicians working today. But who is actually talking about this album? And I mean the album — not the spectacle of the exhibit, not who's heard it and who hasn't. In the end, Negus is a work at odds with itself, both powerful and powerless, whose radical form limits its reach. Yasiin Bey demands your utmost attention, and those who could afford to gave his experiment a try. But the hip-hop community at large hasn't budged.