Accessibility links
2020 State Of The Union Video Highlights President Trump stunned lawmakers and guests in the House chamber when he awarded the Presidential Medal of Freedom to conservative talk show host Rush Limbaugh in the middle of his prime-time speech. 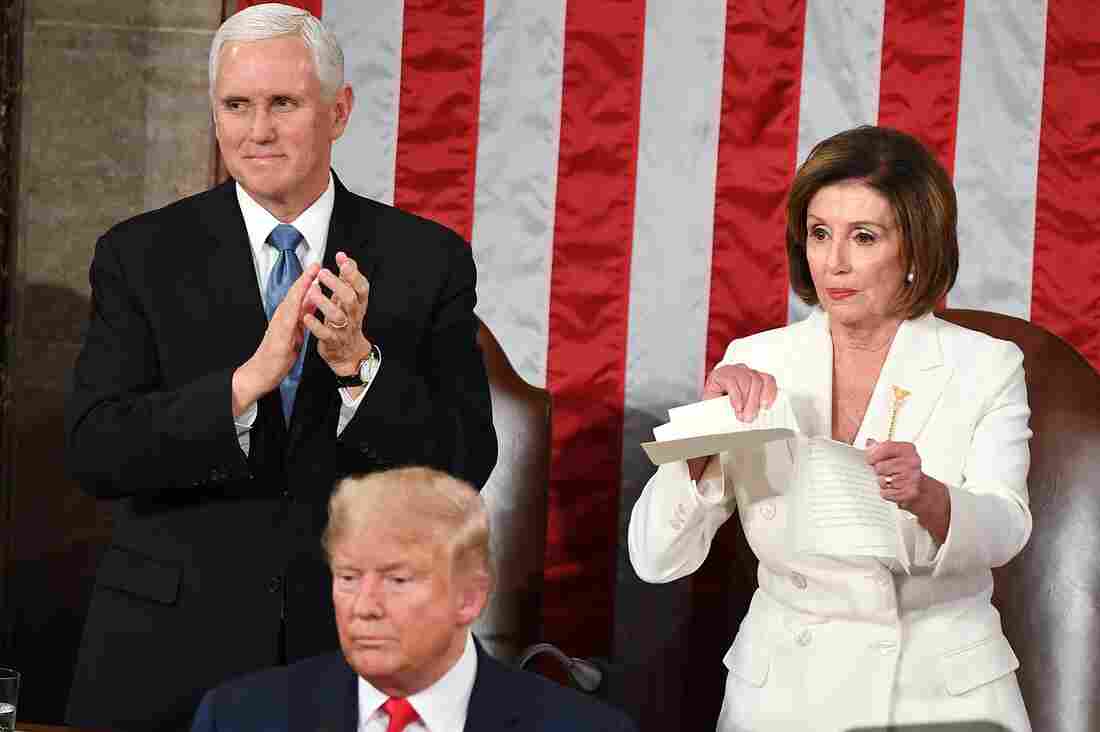 House Speaker Nancy Pelosi rips a copy of President Trump's speech after he delivered the State of the Union address at the Capitol on Tuesday. Mandel Ngan/AFP via Getty Images hide caption 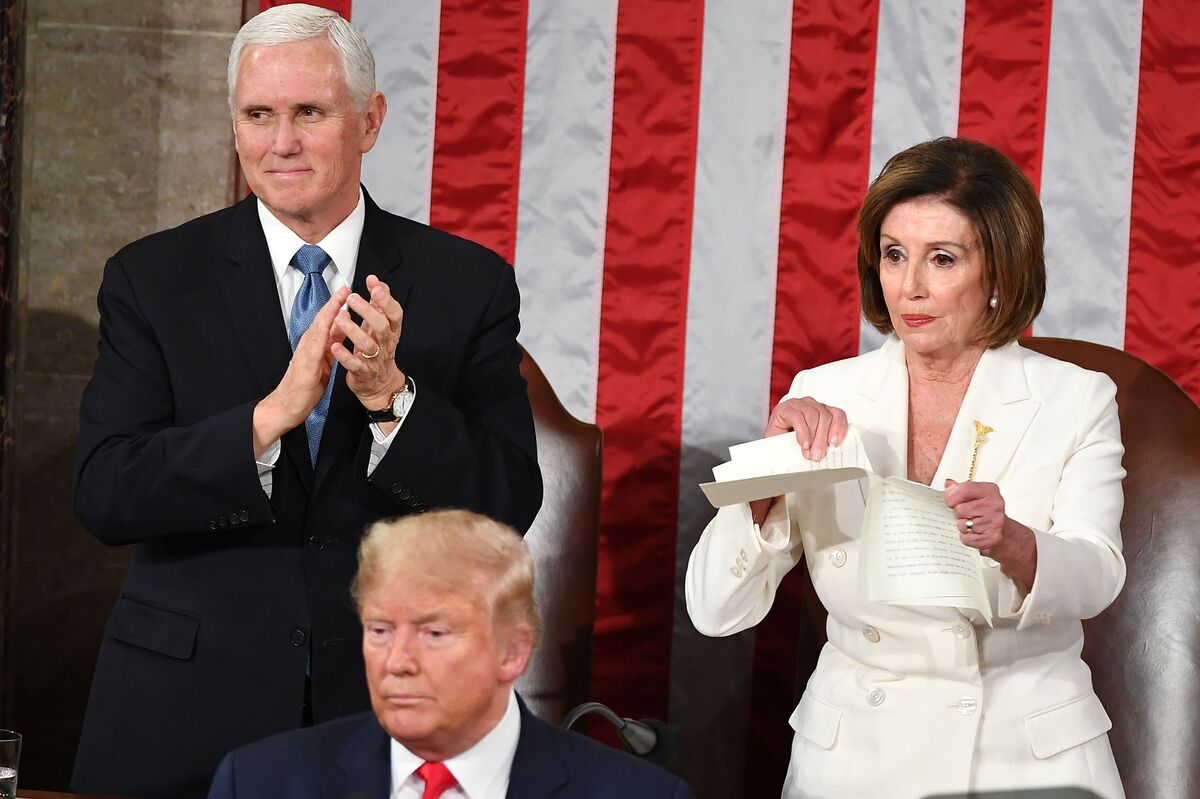 House Speaker Nancy Pelosi rips a copy of President Trump's speech after he delivered the State of the Union address at the Capitol on Tuesday.

President Trump's State of the Union address included some surprising moments — both emotional announcements and a blunt reaction from the speaker of the House — all playing out live before a prime-time audience.

Here are six of the highlights:

1. House Speaker Nancy Pelosi rips up a copy of the president's speech

House Speaker Nancy Pelosi, D-Calif., presided over the chamber, but when the president approached the dais before he began his speech, he apparently declined to shake her hand.

Pelosi sat behind the president and paged through a copy of his prepared remarks. She sat still during the frequent times the president was interrupted by thunderous applause from Republicans as he touted accomplishments she opposed, like his tax cuts.

The move was in full view of the cameras broadcasting the speech, and it was a clear indication of what she thought of the more than an hour-and-a-half address. Asked about the move afterward, she told reporters: "It was the courteous thing to do, considering the alternative."

2. Awarding the Presidential Medal of Freedom to Rush Limbaugh

The president invited Rush Limbaugh, the popular conservative talk-radio host, to attend his address. Limbaugh had just announced a day earlier that he was diagnosed with advanced-stage lung cancer.

"Almost every American family knows the pain when a loved one is diagnosed with a serious illness," the president noted. But then Trump announced, in a dramatic fashion, that he was bestowing the "highest civilian honor" to Limbaugh. 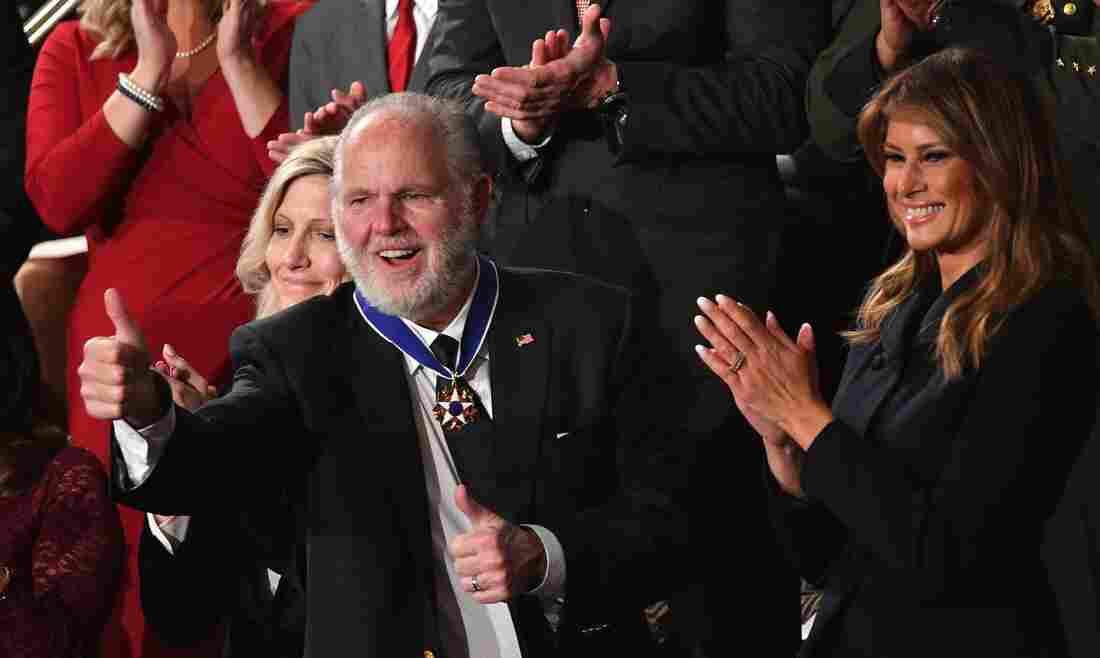 Radio personality Rush Limbaugh gives a thumbs-up after being awarded the Presidential Medal of Freedom by first lady Melania Trump during the State of the Union address. Mandel Ngan/AFP via Getty Images hide caption

As cameras focused in on the commentator's apparently surprised face, the president then went on to say that instead of waiting for a White House ceremony to mark the honor, he was making it official in the middle of his speech.

First lady Melania Trump then stood up and draped the prestigious medal on a blue ribbon around Limbaugh's neck. Cheers erupted in the chamber, and many Republicans stood and applauded the unexpected and emotional moment.

Trump's address included an emotional reunion that was one of the rare moments when both parties applauded. He invited Amy Williams, an Army spouse from Fort Bragg, N.C., to pay tribute to the role that military families play. She was seated in the first lady's box with her two children — 6-year-old Elliana and 3-year-old Rowan.

The president noted that Williams' husband was deployed to Afghanistan for the past seven months — his fourth deployment. Then he stunned her with the revelation that her husband was home.

As he entered the chamber, both Republicans and Democrats leaped to their feet, and chants of "USA, USA" erupted as the president thanked Sgt. 1st Class Townsend Williams, who hugged his wife and children.

Trump invited Iain Lanphier, an eighth-grader who he said aspired to join the newly created Space Force. He quoted Iain, who said, "Most people look up at space. I want to look down on the world."

Trump also recognized Charles McGee, who he said was one of the "last surviving Tuskegee airmen," a group of African American fighter pilots from World War II. McGee is also Iain's great-grandfather.

The president said he recently signed a bill promoting McGee to the rank of brigadier general and had pinned his new stars on his shoulders in the Oval Office earlier on Tuesday.

A smiling McGee stood and marked another moment when Congress came together to recognize the decorated veteran.

The president invited Janiyah Davis, a fourth-grader from Philadelphia, and her mother, Stephanie, to be among the guests in Melania Trump's box in the House chamber.

Introducing them, the president explained that Stephanie Davis was a single mom who was unable to send her daughter to the school she wanted to attend because Pennsylvania's Democratic governor vetoed a bill focused on school choice.

He then informed Janiyah that a scholarship "has become available" and she would be able to go to "the school of your choice." A surprised Janiyah embraced her mother.

It was unclear how the president directed the grant specifically to the student. He urged Congress to pass a bill providing tax credits to those contributing to elementary and secondary school scholarship programs.

When Trump released an initial guest list ahead of the State of the Union address, Venezuelan opposition leader Juan Guaidó was not on it.

During his speech, though, Trump stressed his administration's efforts in "standing up for freedom" and declared that the U.S. joined with more than 50 other countries to oppose "the socialist dictator of Venezuela, Nicolás Maduro."

Then the president pointed to Guaidó, who was sitting in the first lady's box. The announcement sparked a standing ovation, including from the House speaker. Trump called him "a very brave man who carries with him the hopes, dreams and aspirations of all Venezuelans."

He then said to Guaidó: "Please take this message back that all Americans are united with the Venezuelan people in their righteous struggle for freedom."

Maduro remains in power in Venezuela, and the appearance of Guaidó comes as he attempts to increase pressure on the authoritarian government in the country to relinquish power.