Accessibility links
Graduates Of Historically Black Colleges May Be Paying More For Loans: Watchdog Graduates of historically black or predominantly Hispanic colleges might be paying more to borrow money because of where they went to school, according to a report from a financial watchdog. 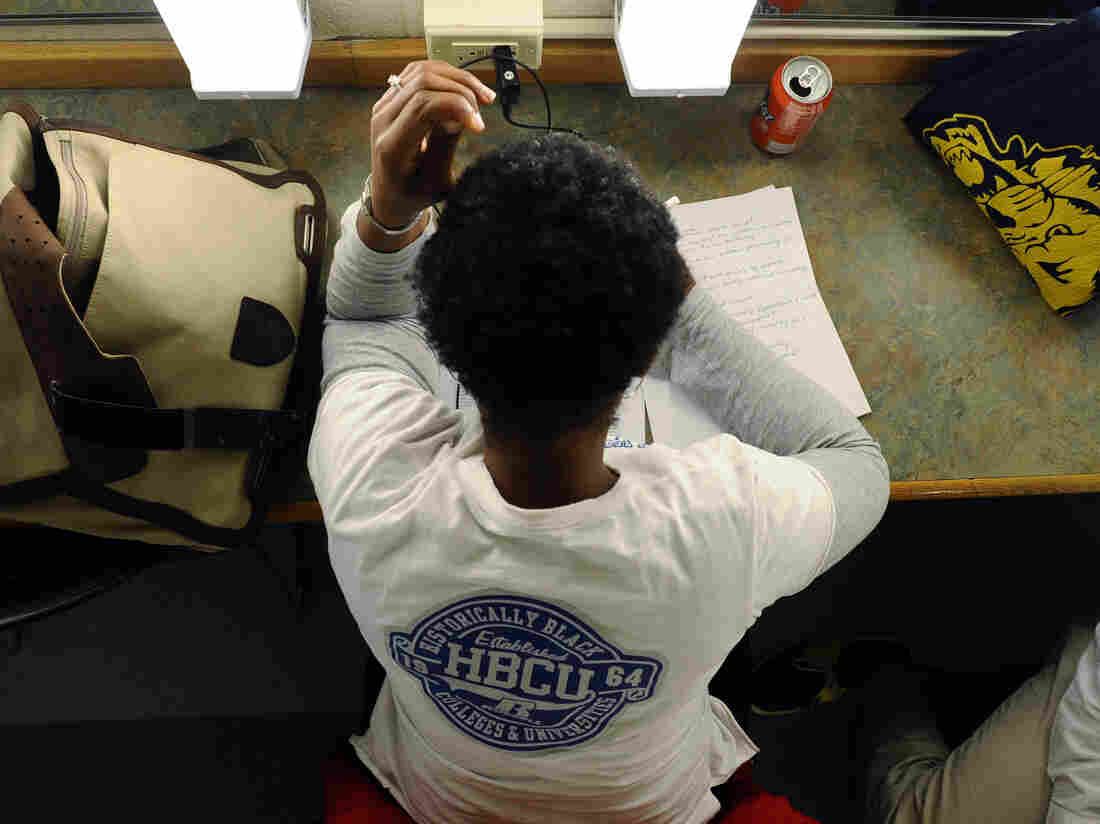 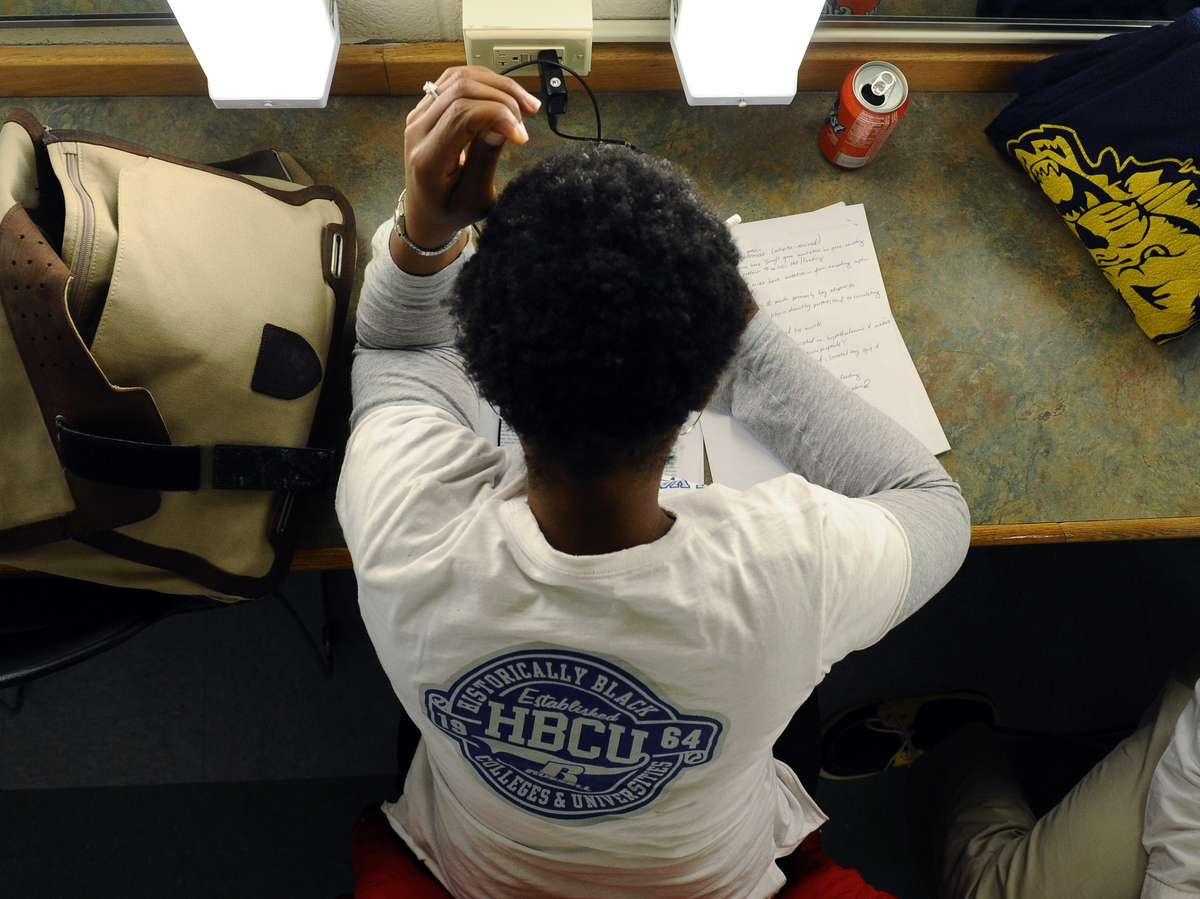 Financial firms may be discriminating against people based on where they went to college, a watchdog group says. In particular, the group found that a lender named Upstart appears to be charging higher interest rates on student loans to graduates of historically black or predominantly Hispanic colleges.

A lot more people are getting loans these days from a new breed of lenders known as fintechs, or financial technology firms. And some of these lenders factor in where loan applicants went to college.

So her group decided to run a test. It chose a lender called Upstart, in part because it's a fairly prominent fintech that says it considers educational data. And the group was able to easily apply and get loan offers on its website.

"The only difference was where he went to school," Welbeck said. It applied as if this fictional borrower went to NYU in New York, many other schools and Howard University — one of the country's most famous historically black colleges and universities.

8 Tips That Will Help You Save Money On A Mortgage

The group found that if the otherwise identical loan applicant went to NYU instead of Howard, there was a striking difference. For a $30,000 personal loan with a five-year term, it found an applicant would pay about $3,500 more in interest and fees if they went to Howard.

"There's no other explanation that we can really come to terms with other than the fact that where this borrower went to school mattered in terms of how Upstart measured their creditworthiness," Welbeck said.

And it apparently mattered quite a bit. The group also found you'd pay more if you went to New Mexico State University-Las Cruces, which has a high percentage of Hispanic students.

In a new report, called Educational Redlining, the group says lenders may be discriminating based on where loan applicants went to college.

For its part, Upstart, seems to welcome the vigilance. "We definitely appreciate the intent," Upstart CEO Dave Girouard told NPR. A former senior executive at Google, he said he founded Upstart to use technology to make credit more available. Girouard said the company looks way beyond your credit score — it examines more than 1,000 factors.

"Our entire mission and the reason we get out of bed every morning is to improve access to affordable credit," Girouard said. "So we are absolutely supportive of the intent that credit shouldn't be biased or unfair in any way."

But Girouard said the test the nonprofit ran doesn't prove that using education as one of those many factors leads to discrimination. Using "hypothetical, contrived applicants for a loan who aren't real people was both anecdotal and not reflective of the real world," he said.

With Lending Club Disgraced, An Industry Looks For Lessons

And he said, under the watchful eye of regulators, Upstart has tested for fairness and bias over "millions of applicants." Girouard added, "Our approach to ensuring that our platform isn't biased against anybody is by doing testing regularly, at massive scale."

The Consumer Financial Protection Bureau recently noted that Upstart has reported to the regulator that, compared to traditional lending models, the company "approves 27% more applicants than the traditional model, and yields 16% lower average [interest rates] for approved loans."

The company told the CFPB that "this reported expansion of credit access reflected in the results provided occurs across all tested race, ethnicity, and sex segments."

Still, the Student Borrower Protection Center's report raised the eyebrows of some legal experts. Todd Baker, who teaches a course on fintech at Columbia University's Law School, said the traditional credit score approach to lending has its own problems and biases. And some fintech lenders' alternative approaches can help.

"Using alternative data can be highly beneficial, but also has dangers and we need to be very vigilant that we don't recreate some of the problematic practices of the past unintentionally," Baker said.

Christopher Odinet, a law professor at the University of Oklahoma, agreed. He said that when it comes to using more alternative data points to improve the traditional credit scoring systems and make them more inclusive, "I think there is absolutely a right way to do this."

Odinet said there's a need for it, too, because there's evidence of inequities in the way young people who don't have much credit history as well as minority groups are served by the traditional approach that relies so much on credit scores.

A lot of this comes down to whether lenders, when they look at education-related data, are truly looking at the individual and not just lumping that person into a group in an unfair way, he said.

"For instance, whether or not you worked through college might be indicative of your ability to handle various financial responsibilities, life responsibilities and make you a more creditworthy individual," Odinet said.

But he said that's different than lumping everybody who, say, went to Howard University, into one group. And he worries that when it comes to considering where you went to school, "the use of education-based data in loan underwriting is inevitably going to cause a discriminatory effect."

Advocates are increasingly worried that casting such a wide net for data to make decisions introduces biases in new and different ways. Welbeck said her group is pushing for better oversight and more transparency from fintech companies.

The nonprofit's report also raised questions about Wells Fargo for offering better interest rates and loan terms for student borrowers at four-year colleges than those who attend two-year community colleges.

"Even with identical credit profiles, community college borrowers would pay a higher price for credit than students at four-year institutions," the report said.

Wells Fargo said in a statement that it disagrees with the study's characterizations.

"Wells Fargo has a long standing commitment to providing access to financing for students attending community colleges," the bank said. "We follow responsible lending practices that take into account expected performance outcomes and are confident that our loan programs conform with fair lending expectations and principles."

Girouard, Upstart's CEO, said his company would be willing to meet with the watchdog group to talk about its concerns. "We're always willing to engage with anybody who wants to understand what we're doing," he said.