Accessibility links
Coronavirus Puts A Crimp On The Chinese Tourism Industry Fear of the respiratory virus, which has infected more than 28,000 people in over two dozen countries, has brought the normally lucrative business to a screeching halt. 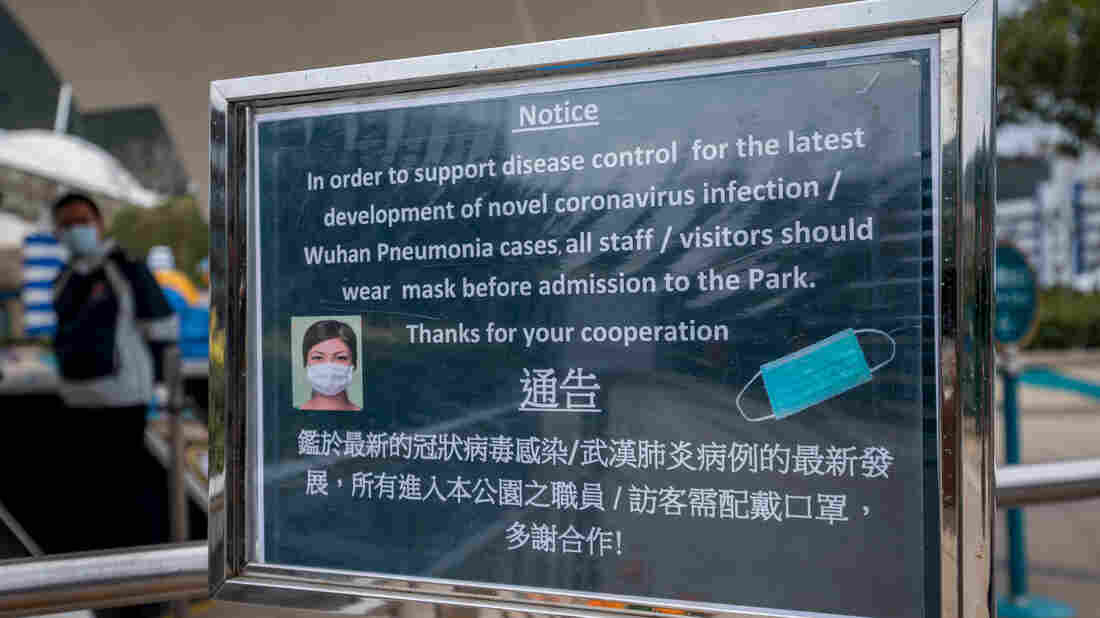 A notice advising all staff and visitors to wear protective masks stands outside the closed Ocean Park in Hong Kong on Monday. Paul Yeung/Bloomberg via Getty Images hide caption 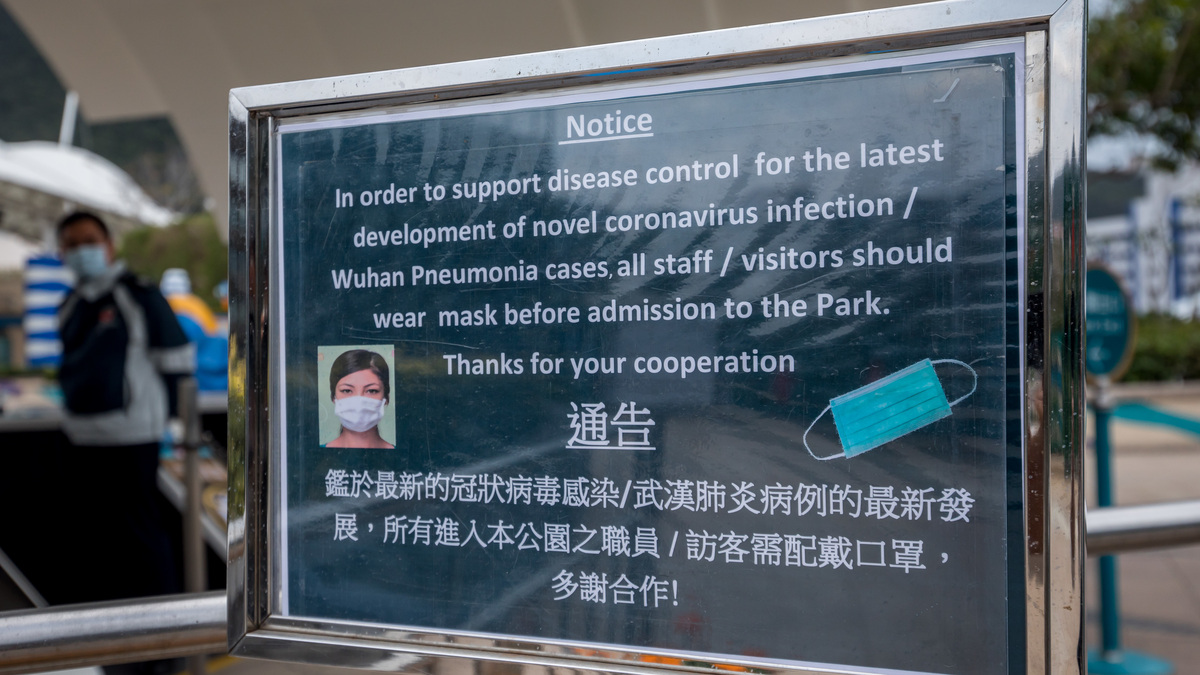 A notice advising all staff and visitors to wear protective masks stands outside the closed Ocean Park in Hong Kong on Monday.

Airlines, cruise ships and high-end hotels worldwide are bracing for a sharp downturn in business because of the fast-spreading strain of coronavirus.

Fear of the respiratory virus, which has infected more than 28,000 people in over two dozen countries, has brought the lucrative Chinese tourism industry to a screeching halt. Beijing has halted tour groups from leaving China, and countries such as the U.S., Australia and Singapore are denying entry to foreign nationals who have recently been in China.

Dozens of airlines have suspended flights to and from China to try to contain the virus known as 2019-nCoV.

The International Air Transport Association (IATA) says the cancellation of thousands of flights will impact the industry but that it has proven resilient to similar shocks in the past. Both business and leisure travel took a hit during the 2003 outbreak of a similar coronavirus — SARS (severe acute respiratory syndrome) — but returned to pre-crisis levels within nine months.

Meanwhile, thousands of passengers and crew members, have been stranded on two cruise ships because of the coronavirus. Some 3,700 people aboard the Diamond Princess are under quarantine off the coast of Japan after a man who disembarked in Hong Kong tested positive. Health officials tested people still on the ship and say results so far show at least 10 of them are infected. Meanwhile, about 1,800 people aboard the second ship, World Dream, are being quarantined at a dock in Hong Kong.

A number of cruise lines, such as Royal Caribbean and Norwegian Cruise Line, have cancelled sailings to and from China or placed restrictions on passengers since the outbreak began.

"There are still too many variables and uncertainties regarding this outbreak to calculate the overall impact on the business," Royal Caribbean said in a statement last week. The company, which says it has cancelled eight cruises so far, added, "If these travel restrictions continue for an extended period of time, they could have a material impact on the overall financial performance of the company."

The new coronavirus emerged just ahead of Lunar New Year, normally one of China's busiest seasons when hundreds of millions of people are traveling — both in and out of the country. Beijing has imposed lockdowns and quarantines on the hardest-hit areas. The government also extended the holiday, which was to start Jan. 24 and run until Jan. 30, until early February in an effort to limit infections.

"You can say that approximately one out of every nine international tourists are ... from mainland China," he says. "That's more than any other country".

Arlt says this is a far cry from a couple decades ago when Chinese tourists were usually diplomats or athletes. Over the years, Beijing has relaxed strict travel restrictions, and a growing economy in China means more people there have disposable income to travel.

Last year, there were roughly 170 million border crossings worldwide by Chinese tourists, Arlt says. The most popular destinations for Chinese visitors are in Asia, places such as Thailand, Hong Kong and Macau. But he says Paris, Sydney and New York City are also favorites.

That's helped make China the largest spender in 2018 in international tourism, pumping $277 billion into the travel industry, according to the United Nations World Tourism Organization.

Chris Heywood of NYC & Company, New York City's marketing organization, says the city welcomed more than a million Chinese visitors in 2018. "China is a tremendously important market for New York City," he says. "It represents about $3 billion in total revenue."

Heywood says that while there's concern about the potential financial impact from the coronavirus, his organization is in a wait-and-see mode.

"We are monitoring the situation very carefully and very closely," he says. "But it's too soon for us to make an assumption on exactly how this is going to affect business in the long term."

Arlt says he's optimistic that Chinese tourism will resume after the coronavirus is contained, much like it did after the 2003 SARS outbreak.

"That was a somewhat similar story," he says. "For about three months, no Chinese came out of China" but then tourism began to pick up. "What I think also we can expect this time is once this is over, then the Chinese will travel even more."

Arlt says his institute estimates that by 2030, 1 out of every 5 international tourists will be Chinese. But that forecast might change, depending on how long it takes to contain the coronavirus.