Accessibility links
Harvey Weinstein Rape Trial: Here Are The 4 Biggest Moments So Far Prosecutors have said their piece; now it's time for Weinstein's legal team to take the stage. But before his rape trial moves on, here's a glimpse of the four biggest courtroom moments so far. 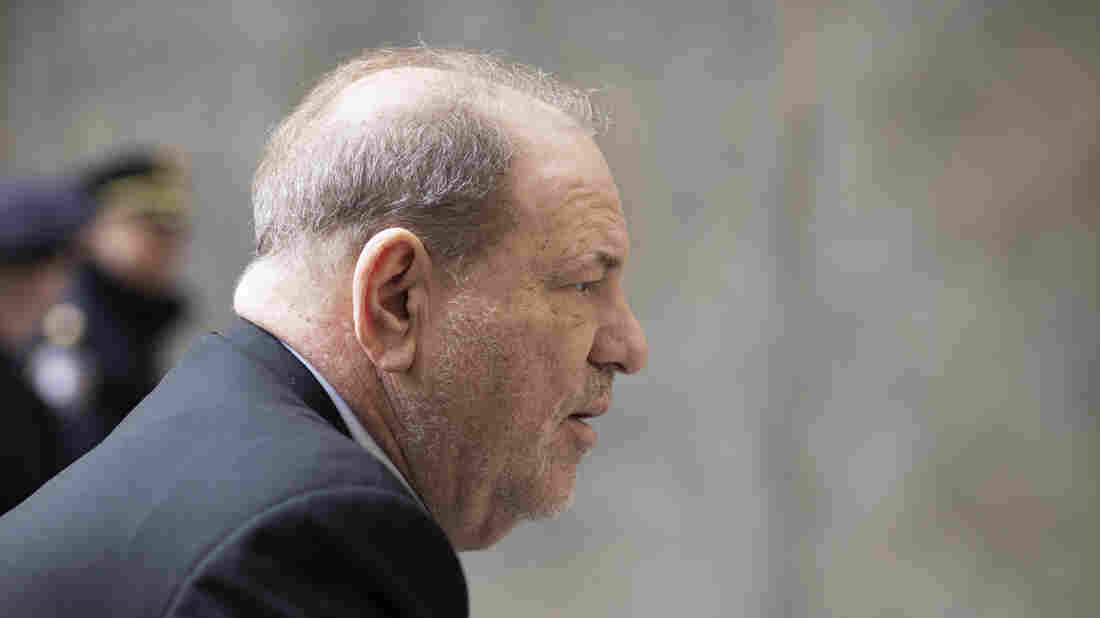 Harvey Weinstein arrives at a Manhattan courtroom for his rape trial on Monday. This week, prosecutors wrapped up their case against the former Hollywood producer. Mark Lennihan/AP hide caption 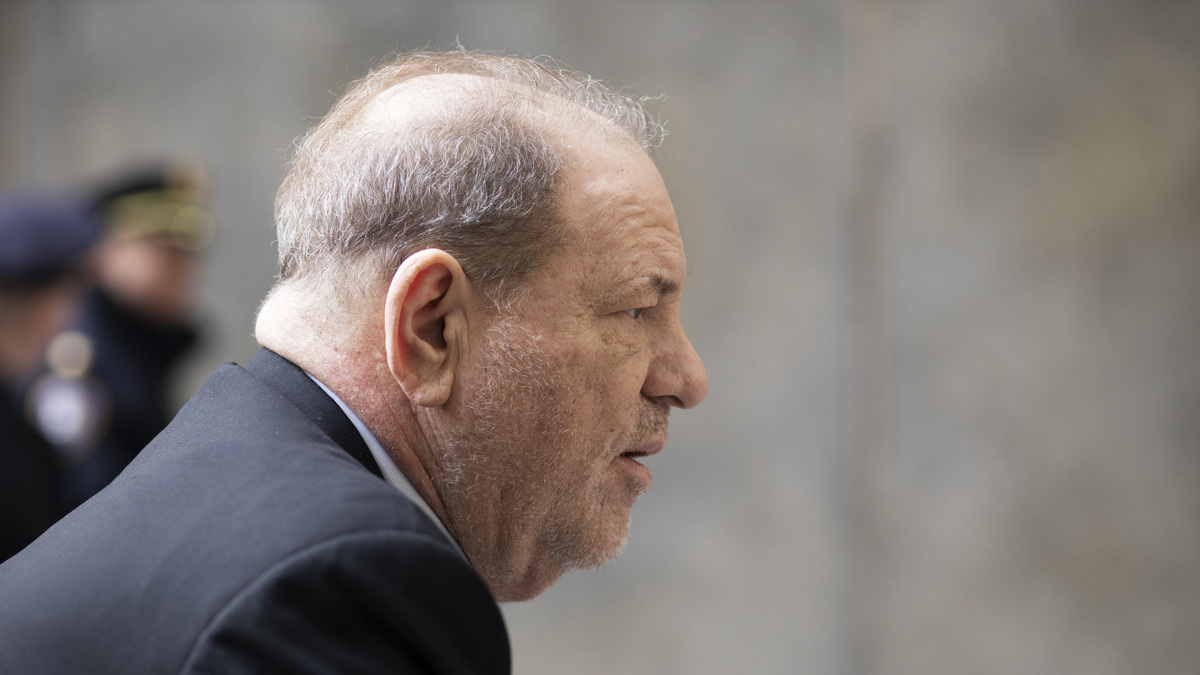 Harvey Weinstein arrives at a Manhattan courtroom for his rape trial on Monday. This week, prosecutors wrapped up their case against the former Hollywood producer.

The prosecution has rested its case.

Just more than two weeks after Manhattan prosecutors made opening statements in Harvey Weinstein's trial, their witnesses have said their piece and the prosecutors have ceded the stage to his defense team.

The former Hollywood megaproducer could face life in prison if convicted of rape and predatory sexual assault, allegations he has repeatedly denied. Weinstein has pleaded not guilty to all charges in Manhattan, casting the incidents as entirely consensual encounters. Now his defense team will get their turn to press their case.

But before the trial moves on, it's worth pausing to review and reflect on what's happened so far. Here's a window on the prosecution's case, told in four major moments.

The first of six women to take the stand and accuse Weinstein of rape or sexual assault, the actress recounted an incident in the winter of 1993-94, roughly three years after she first met the producer.

She said Weinstein gave her a ride home after a dinner party. After dropping her off, she said, the producer reappeared at her door, forced his way through and began unbuttoning his shirt as soon as he was inside her apartment. Then, he allegedly shoved her onto the bed, where he held her down and raped her.

She recalled that, immediately afterward, he also forcibly performed oral sex on her over her objections. "This is for you," he told her, according to Sciorra.

A Timeline Of The Harvey Weinstein Allegations

"I wanted to pretend it never happened," she said of the immediate aftermath.

During cross-examination, Weinstein's defense team questioned how the producer could have made it into Sciorra's apartment building, past her doorman and all the way to her door without her knowing. And they focused on the fact that she did not immediately report the alleged incident to police.

Sciorra also said he later harassed her with messages and surprise visits while she was filming a movie in London. But she largely avoided one-on-one contact with him — except, she said, for another notable incident: During the 1997 Cannes Film Festival in France, she opened her hotel room door to find him "in his underwear with a bottle of baby oil in one hand and a videotape in the other."

Sciorra said he left when she managed to call hotel staff up to the room. 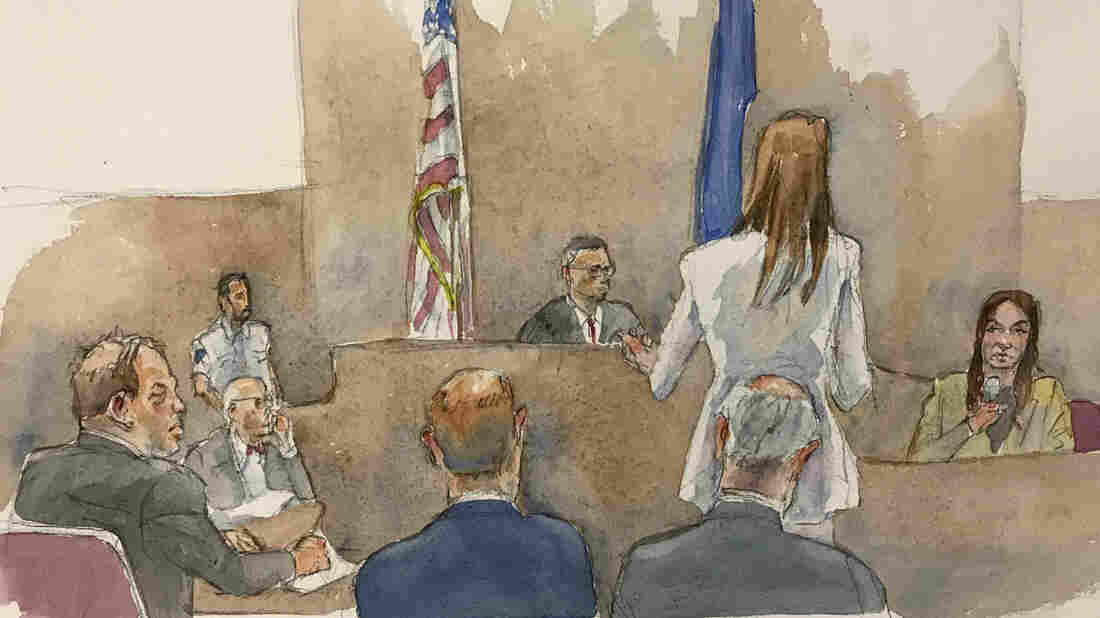 In this courtroom sketch, Weinstein (far left) listens as Manhattan Assistant District Attorney Meghan Hast (in white) speaks with witness Mimi Haley during Haley's testimony late last month. Haley testified that Weinstein pushed her onto a bed and sexually assaulted her, despite her kicks and pleas to stop. Aggie Kenny/AP hide caption 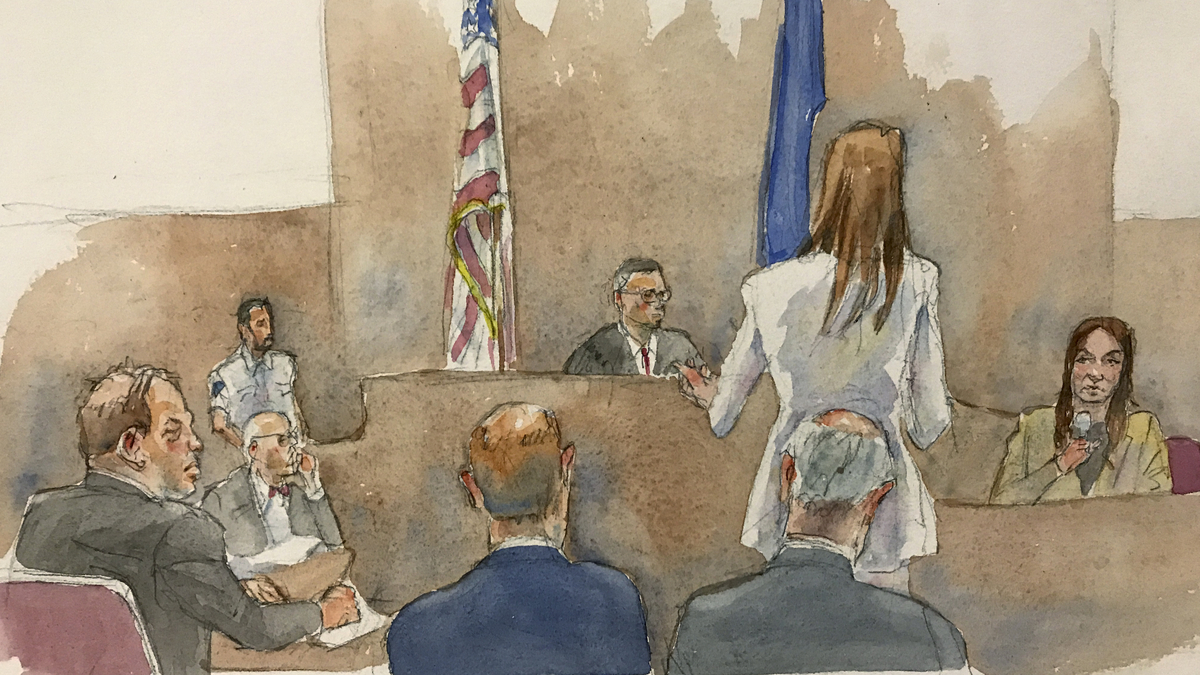 In this courtroom sketch, Weinstein (far left) listens as Manhattan Assistant District Attorney Meghan Hast (in white) speaks with witness Mimi Haley during Haley's testimony late last month. Haley testified that Weinstein pushed her onto a bed and sexually assaulted her, despite her kicks and pleas to stop.

One thing to note: Haley recently changed her last name from Haleyi, partly because of negative attention associated with the trial.

Haley told the courtroom that on July 10, 2006, when the then-production assistant was at Weinstein's apartment at his invitation, the producer pushed her into a bedroom and onto the bed. There, she said, he ignored her protests that she was menstruating, removed her tampon and forcibly performed oral sex on her as she repeatedly told him no.

"I couldn't even get away from him at all, let alone get out of the apartment," she said. "Ultimately after a while, I just checked out and decided to endure it. That was the safest thing for me to do at that point."

Later that same month, Haley said, she went to Weinstein's hotel to confront him. He had her come up to his room, where she said he had sex with her while she didn't resist.

"I felt numb," she said, noting her sense of humiliation at finding herself in another helpless position. "I felt like an idiot, and I felt numb."

Weinstein's team sought to undermine Haley's account by questioning why she continued to remain in contact with him, exchanging friendly emails and other messages. 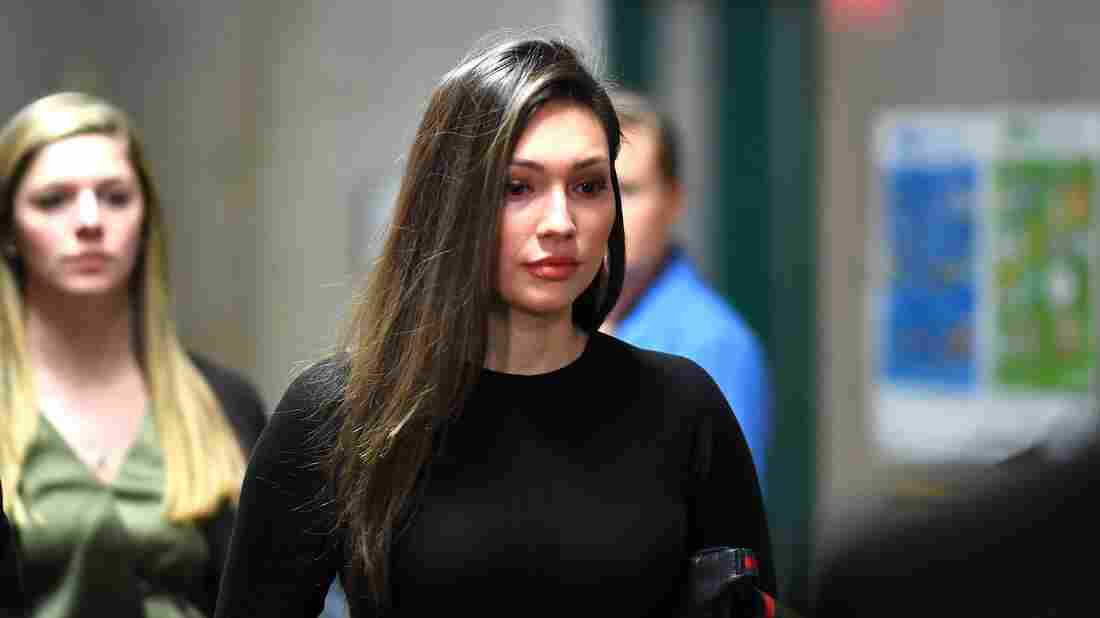 Jessica Mann arrives at the Manhattan Criminal Court late last month. The testimony offered by the former actress contained some of the most explosive accusations against Weinstein, who faces the prospect of life in prison if convicted on all counts. Johannes Eisele/AFP via Getty Images hide caption 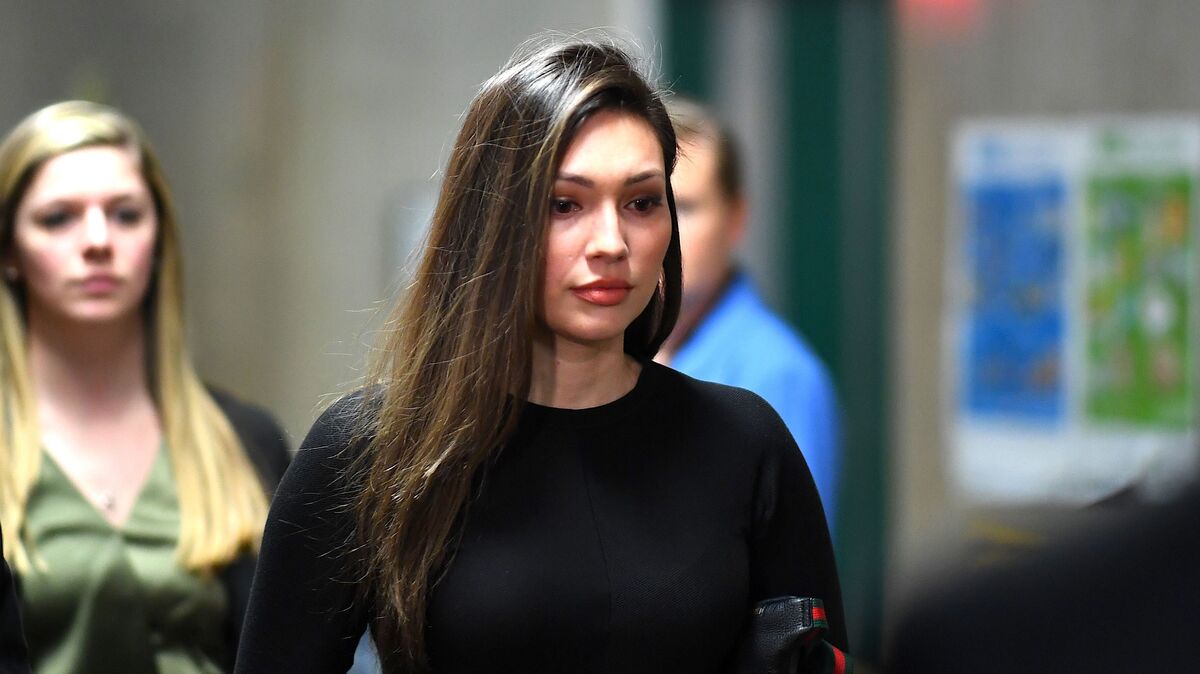 Jessica Mann arrives at the Manhattan Criminal Court late last month. The testimony offered by the former actress contained some of the most explosive accusations against Weinstein, who faces the prospect of life in prison if convicted on all counts.

Mann's assertions, along with Haley's, form the foundation of the charges.

An aspiring actress at the time, she said she met Weinstein at a party around the start of 2013. They had a few more encounters, typically at parties he had invited her to. Then, Mann said, a dinner with him and her female friend later that year ended with all three in a hotel suite in LA.

He allegedly pulled Mann into the bedroom and closed the door, leaving her friend in the other room, and performed oral sex on her over her objections. This alleged incident, because it didn't occur in Manhattan, is not included in the charges.

But Mann said she continued to see him afterward and that they developed a sexual relationship she described as "extremely degrading." "I thought he was deformed and intersex," she told the courtroom, referring to "extreme scarring" and other graphic details about Weinstein's body. Other witnesses recounted similar tales.

During a trip to New York City, Mann said, she arranged to meet Weinstein with two of her associates over breakfast at her hotel. But when she went downstairs, she said she found him booking a room at the front desk despite her objections. He then allegedly pulled her upstairs, demanded she undress and forced her to have sex without using protection.

During cross-examination, defense attorneys pointed to what they said were flirtatious and flattering messages she sent to Weinstein or to others about him. As part of this litany of messages, they requested that she read a letter that she wrote praising Weinstein, which also included a reference to a separate sexual assault in her past. But as she read the letter, Mann broke down in sobs and had to leave the courtroom.

After the cross-examination resumed the next day, Mann pushed back on the line of questioning, saying her correspondence wasn't the important point.

"I do want the jury to know he is my rapist," she told Weinstein's lawyer, "and I hope I can continue to explain the dynamic of why I engaged with him. I mean, he raped me; it is irrelevant."

Prosecutors also supported their case with stories from several other women, who contributed their testimony under exceptions to what's called the "Molineux Rule." That provision limits the type of evidence typically allowed at trial when it isn't directly related, but occasionally judges will admit additional accounts if they demonstrate a pattern of behavior.

In Weinstein's case, the charges against him were founded on the testimony of Mann, Haley and Sciorra — but Judge James Burke allowed three other women to testify at the trial: Tarale Wulff, Dawn Dunning and Lauren Young.

The stories the women told shared striking similarities: young women who were aspiring actresses or models, warily meeting with the producer who dangled promises of jobs and movie roles, only to find themselves unexpectedly alone with him at his home or in a hotel room.

"I said 'no, no, no' the whole time; that I had a boyfriend; that I wasn't interested," Young said of an incident in 2013, alleging that he cornered and sexually assaulted her in a hotel bathroom. "He's carrying on with conversation, 'This is what all actresses do, to make it.' "