In the early morning of June 12, 2017, a group of eight Central American migrants decided to go on a hunger strike to protest conditions at the immigration detention center where they were being held in California.

When detainees arrive at the facility, they're given a handbook that states explicitly, "Detention is NOT prison." Immigration detention is where the government holds people while deciding whether to deport them, and most detainees have no criminal record. But this group said the conditions felt like those of a penitentiary.

The guards were discriminating against them, they lacked access to clean water, the bonds for their immigration cases were too expensive and they were receiving information only in English.

When detention officers ordered them to return to their beds for a routine population "count," the eight men refused to move from tables in the facility's day room until they could speak to a supervisor or an official with U.S. Immigration and Customs Enforcement (ICE).

Surveillance footage obtained by NPR shows what happened next.

Detention officers spent several minutes speaking to the detainees, telling them to return to their bunks. They waived a canister of pepper spray in front of them, then attempted to physically move the detainees.

The video shows the detainees trying to remain seated with their arms linked. But detention officers would later claim they were inciting a "rebellion" and "assaulting" staff.

Detention officers then sprayed pepper spray at the men at least three times and forcibly removed them from the tables.

As they visibly recoiled from the spray, some of the detainees were pushed into walls, pulled to the ground or dragged on the floor by guards.

Afterward, though not seen on camera, five of the detainees were placed in hot showers. Hot water, however, can worsen the painful burning effect from pepper spray, something an internal oversight office at the Department of Homeland Security noted in a review of the incident.

"I couldn't take it," Isaac Antonio Lopez Castillo, one of the detainees, later testified in a deposition. "I was even throwing up from the pepper gas."

All eight detainees were then sent to "segregation" — ICE's term for solitary confinement — for 10 days for "engaging in or inciting a group demonstration."

NPR obtained footage of the incident from a federal courthouse in Riverside, Calif., where the men sued the two detention officers who used pepper spray, as well as the for-profit company that runs the facility, Florida-based GEO Group. Their lawsuit contended that the guards used excessive force and violated their civil rights and that GEO was negligent in its training. In late January, the two sides notified the court that they had agreed to settle the case "for a confidential amount."

The announcement of the settlement ends 20 months of legal proceedings that — through the release of documents, depositions and video from ICE's Adelanto, Calif., processing center — have opened a window into a facility that has come under intense scrutiny from federal inspectors and immigration advocates alike.

As NPR reported in January, a previously confidential government inspection found that the facility was failing to meet many of the government's own standards for solitary confinement, mental health treatment and medical care. The report also found that staff at Adelanto had retaliated against detainees.

Immigration attorneys and advocates say the conditions at Adelanto are emblematic of problems throughout an immigration detention system that has come to increasingly rely on firms like GEO to help enforce the Trump administration's hard-line immigration policy.

The acting director of ICE, Matthew Albence, said in 2019 that the Adelanto facility is "representative of all our detention centers." But he disagreed with the criticisms of immigration detention facilities, saying, "They're safe. They're humane. They're secure."

Overall, more than 40,000 people are in immigration detention nationwide. Adelanto can house roughly 2,000 detainees and is set to expand under a new contract.

In their depositions, guards at Adelanto described a hostile situation that threatened to spin out of control because of the detainees' refusal to return to their bunks.

"It looked like — like a rebellion," said Sgt. Giovanni Campos, one of the defendants. Commotion from the hunger strikers, he said, was leading other detainees to yell and cause a bigger disturbance.

Lt. Jane Diaz, another defendant, also referred to the incident as a "rebellion" and said her fellow officers were elbowed by the detainees as the guards tried to move them.

"They were assaulting our staff," she said.

In that environment, the guards say, their use of pepper spray was appropriate.

"If they refuse to go to count, if they refuse verbal commands, and they're disrupting our dorm. ... This is why they got sprayed," Diaz said during a May 2019 deposition.

In a statement to NPR, a GEO spokesperson wrote, "GEO strongly rejects the allegations outlined in the lawsuit, which is part of a coordinated effort to undermine immigration policies that our company plays no role in setting."

Lawyers for GEO have also argued that the use of hot water to remove the pepper spray was appropriate.

"Water, which is the method used at the Facility for decontamination purposes, does reactivate the tingling sensation caused by the OC spray," they argued in one legal filing, "however, it is necessary to remove the spray."

The GEO spokesperson also stated, "Independent reviews of the incident conducted and commissioned by the federal government found that our employees acted in accordance with established protocols and procedures."

A spokesperson for ICE declined to comment, but an inspector from the Department of Homeland Security who reviewed the incident concluded that the use of pepper spray "was appropriate given the circumstances." However, the inspector faulted Adelanto for failing to provide cold water when it came time to clean the spray off the detainees, writing that "warm water will exacerbate the burning effect of the OC pepper spray."

"We wanted to be heard" 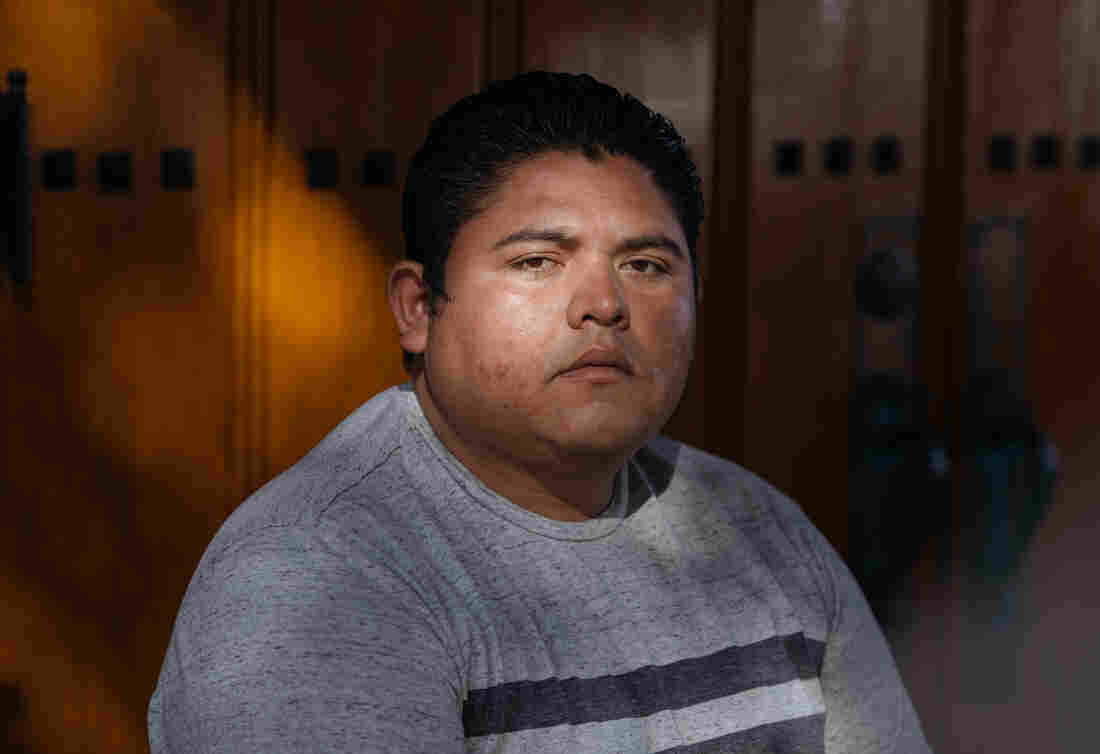 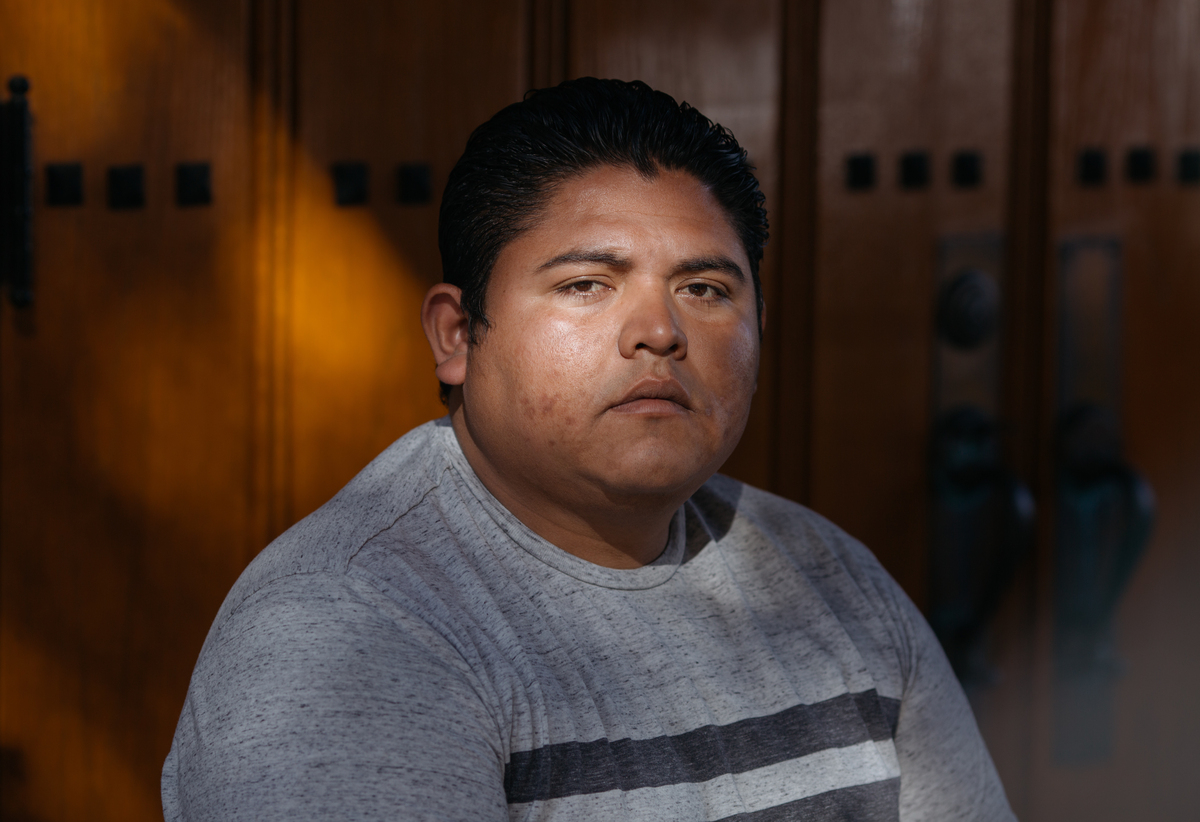 Alexander Antonio Burgos Mejia was detained at the Adelanto ICE Processing Center in 2017, when he went on a hunger strike to protest conditions at the facility. He said he and the other detainees suffered burns and other injuries after GEO Group staff used pepper spray. "I will never forget seeing the faces of my friends, seeing them crying," he said.

Attorneys for the detainees say that facility staff caused the disturbance by escalating the situation and using more force than necessary.

"Our clients fled violence and persecution in their home countries, believing they would find safety and security in the United States," said attorney Rachel Steinback in a statement. "Instead, they were subjected to inhumane treatment at Adelanto — and were violently punished for daring to complain."

The detainees' attorneys cited GEO's own use-of-force policy, which considers pepper spray a "major use of force." According to the policy, officers can only use "major" force when, "Imminent and immediate danger to employees, inmates, or other persons exist."

The detainees said they were clear with GEO staff that they were starting a "peaceful" hunger strike to get facility supervisors to discuss their complaints.

"We just wanted to speak and we wanted to be heard," said one of the strikers, Julio Cesar Barahona Cornejo. "At no time did I raise my hands to try to hit them or anything."

Their actions, they say, were met with hostility, then physical force, then pepper spray.

According to the lawsuit, one of the detainees broke his nose and had his tooth knocked out after he was pushed into a wall. GEO's attorneys say it is "uncertain" whether the detainee's nose was broken during the incident, because he didn't report it to a doctor that day.

"What they did to us, you don't even do that to an animal," said another detainee, Josue Vladimir Cortez Diaz.

The records in the case also raise questions about Lt. Jane Diaz's record at the facility, including an investigation into a separate pepper spray incident from 2019.

A declaration filed by Diaz's own legal defense mentions "an April 2019 complaint/investigation related to Diaz's attempt to use chemical agents on a detainee in violation of GEO policy." According to the legal filing, "GEO personnel found that Diaz obstructed the investigation by not providing complete information to the investigator." The incident "ultimately led to her termination from GEO," according to the filing.

Susan Coleman, an attorney representing Diaz, Campos and GEO, stated in an email to NPR, "We can't comment on personnel actions."

Advocates for immigrants say the allegations from the 2017 incident fit a broader pattern of detainee mistreatment at Adelanto.

Under the Freedom of Information Act, NPR has obtained and examined hundreds of grievances filed by detainees at the facility. Several of those complaints allege threats, mistreatment and verbal abuse by Adelanto staff.

In February 2018, a female detention officer said, "I won't hesitate to drop all this [sic] dumb bitches off their bunks," according to a detainee's complaint.

"How am I safe if she comes angry again?" the detainee wrote.

"What they did to us, you don't even do that to an animal."

Another detainee complained that when his family was visiting, a detention officer "mocked me and my family's English." When the detainee's wife spoke to the officer about the comment, the detention officer responded, "Welcome to jail."

And a series of complaints refer to a guard "harassing" people and saying, "I don't like Mexicans."

In each of these three cases, according to the records, GEO found that the complaints were substantiated. But there is no additional information about how the company or ICE addressed these issues.

In a statement, GEO said, "Our company took corrective action, including disciplinary action against employees, where appropriate," but it did not provide specifics on these cases.

"They treated me worse than trash"

Steinback, from the detainees' legal team, says she hopes the settlement in this case "emboldens others who are being abused and mistreated to come forward and to expose the horrors that are happening in these private immigration detention centers."

Regardless of the outcome, the immigration status for several of the detainees remains in flux. One of them has obtained asylum in the U.S., two had their asylum requests rejected and the five others are still awaiting final decisions.

Isaac Antonio Lopez Castillo did not receive asylum. He ended up in Tijuana, Mexico, after the incident, where he found work at a hotel.

In his deposition, Lopez Castillo said he had sought asylum in the U.S. to escape violence from gangs and police in El Salvador. But after his experience in immigration detention, he said he changed his mind about America.

"Not even in my country was I treated as bad as they treated me in the United States," said Lopez Castillo.

"They treated me worse than trash when all I was trying to do was start a life."

You can see the full video of the incident here.