Accessibility links
Cities And States Are Saying No To Cashless Shops Washington, D.C., is the latest city to consider banning businesses from rejecting cash. Opponents of cashless stores say they discriminate against low-income, homeless and undocumented people. 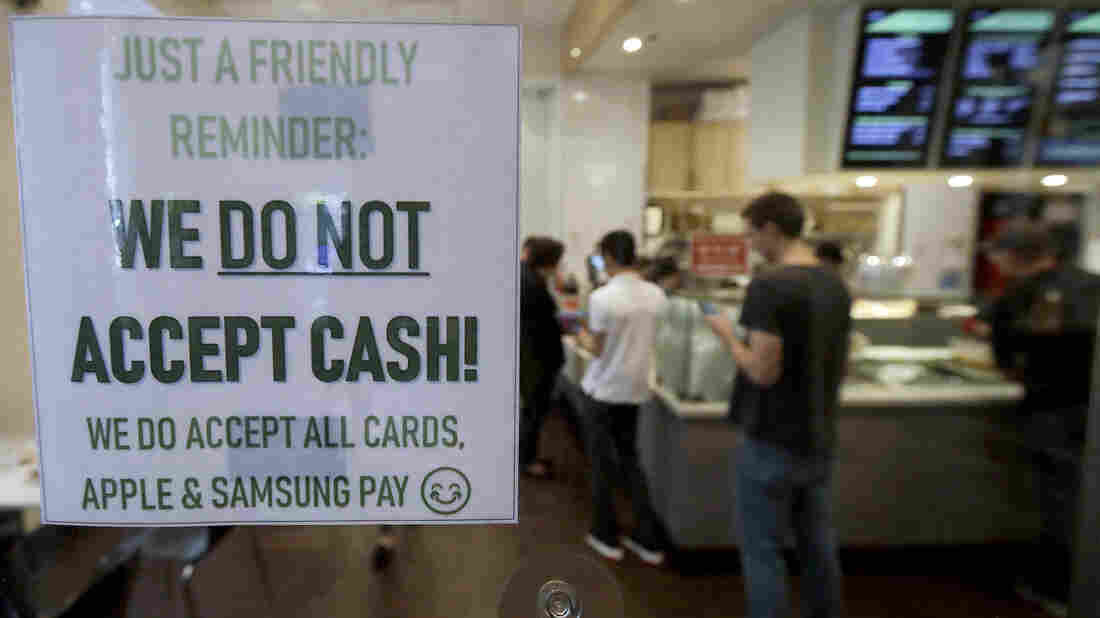 A sign alerts customers that cash is not accepted at a shop in San Francisco last year. The city subsequently banned businesses from rejecting cash. Jeff Chiu/AP hide caption 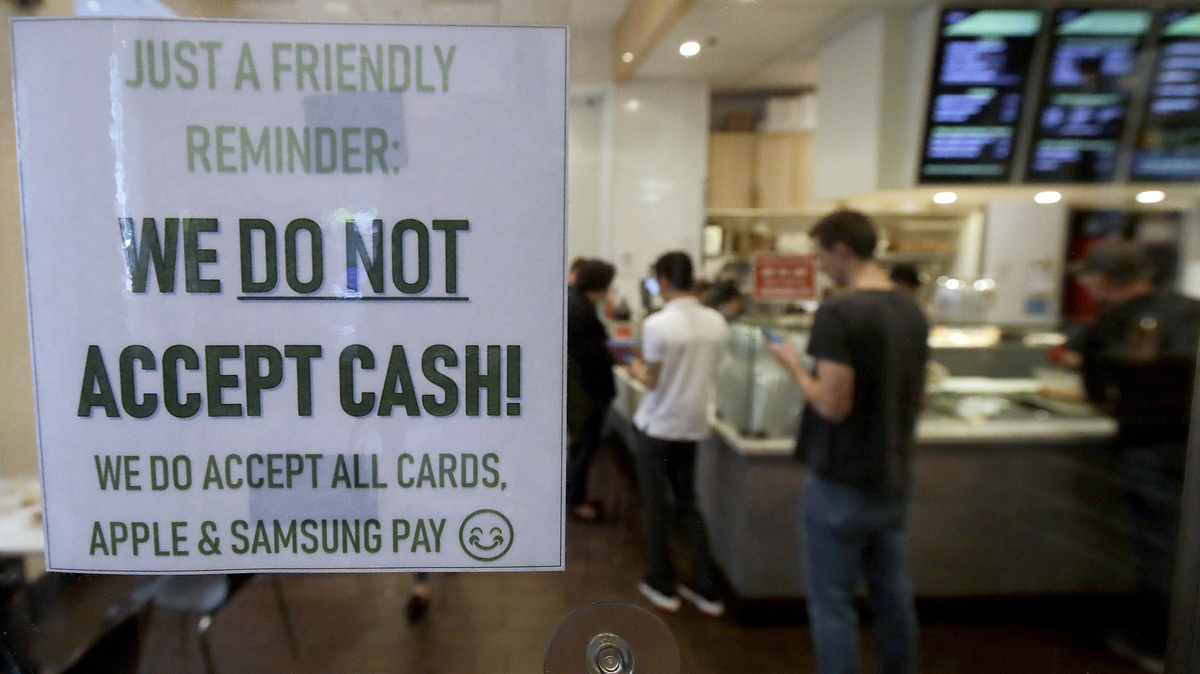 A sign alerts customers that cash is not accepted at a shop in San Francisco last year. The city subsequently banned businesses from rejecting cash.

After almost 10 minutes of standing in line at a coffee shop, Ritchie Torres realized he only had cash in his pocket — a form of payment no longer accepted by this store.

"It was a humiliating experience," he said. "I remember wondering aloud, how could a business refuse to accept cash, which is legal tender?"

Torres is a City Council member in New York. He says his constituents, especially seniors, have also complained about a spurt of cashless stores. So Torres led the charge on a bill to ban businesses from rejecting cash, which New York's city leaders passed almost unanimously last month.

A similar ban is slated for a hearing in Washington, D.C., on Feb. 13. In the past year, Philadelphia, San Francisco and the state of New Jersey have also banned cashless stores — a rare case of governments fighting a tech trend before it spreads far. Massachusetts has required establishments to accept cash since 1978.

"A cashless economy is not an inclusive economy," said Tazra Mitchell, policy director at the research and advocacy group DC Fiscal Policy Institute.

Excluding people from paying with cash means "essentially discriminating against people who are low-income, people who are homeless, also undocumented," she said.

Getting a credit or debit card often requires a form of ID, a utility or another bill, money to deposit and a financial history. Mitchell said that in Washington, D.C., nearly a third of residents rely on cash every day because they don't have a card or even a bank account.

In fact, as cities have cracked down on the cashless economy and spurred new conversations about whom it leaves out, some of the biggest names that tried going cashless — Amazon's automated convenience store Go and salad chain Sweetgreen — have reversed their policies in favor of accepting cash.

"Going cashless had ... positive results, but it also had the unintended consequence of excluding those who prefer to pay or can only pay with cash," Sweetgreen officials wrote in a Medium post.

These reversals show that the market is working to respond to its communities, said National Retail Federation General Counsel Stephanie Martz. She said new laws are "a solution in search of a problem" as the number of businesses to go cashless is very small — in part because each card transaction comes with a fee the business has to pay.

Credit card companies, which get a cut every time a card is swiped, have rewarded the cashless trend. For example, in 2018, Visa paid $10,000 each to 50 businesses that stopped accepting cash.

And some store owners have argued, cash is inefficient. For example, it slows down the line, requires armored cars, and attracts break-ins or skimming by workers.

And indeed, cash is becoming less popular among U.S. shoppers. The Federal Reserve found in 2018 that cash had stopped being the No. 1 payment choice — overtaken by debit cards.

But cash is still the most common way people pay amounts under $10 or $25 — especially among those older than 55 and younger than 25. And some people prefer cash for privacy reasons — to protect their purchase history from being tracked by advertisers or banks.

Cash is "going to feel much more painful to give up because we can see it outflow from our hand," said Avni Shah, assistant professor of marketing at the University of Toronto. Her research found that when people pay in cash, they are more mindful of their spending — willing to spend less to begin with — but they also value their purchases more and feel more loyal to the seller.

"With cash, we can feel this emotional attachment and we value what we have a bit more," she said.

The Pros And Cons Of Moving Toward A Cashless Society

The Pros And Cons Of Moving Toward A Cashless Society

Shah acknowledged that different businesses may have priorities other than loyalty, such as convenience and speed of getting the customer in and out of the store. Opponents of the bans on cashless establishments have argued that businesses should be able to make these decisions for themselves.

"We don't think that in five years laws that ban stores from going cashless are going to look smart," Martz said, envisioning a near future where everyone has access to digital payments thanks to advances in financial technology. In that future, she argued, banning businesses from going cashless could hamstring them from becoming more efficient.

But Torres and Mitchell said cashless laws are there to balance technological progress with an economy that's fair and inclusive.