Accessibility links
Review: 'Verge,' By Lidia Yuknavitch Lidia Yuknavitch's new story collection is weighed down by strangely predictable structures and obvious metaphors — but in places it's rivetingly insightful, and one story towers above the rest.

The Stories In 'Verge' Are Beautiful, But Don't Quite Satisfy

The Stories In 'Verge' Are Beautiful, But Don't Quite Satisfy 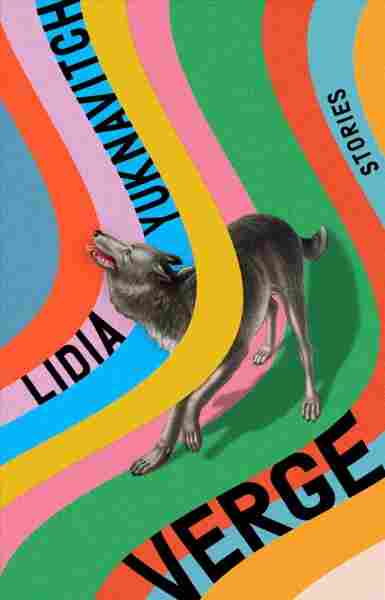 In reference to the sexless characters of her novel The Book of Joan, Lidia Yuknavitch once said that she didn't get rid of gender, but instead "flattened it out ... in a way that helped me focus a question." That worked for The Book of Joan. For Yuknavitch's new story collection Verge, it mostly doesn't.

Verge is inhabited by people at the limits of society. A former addict invites an addict and street-walker into her presumably middle-class home in "Street Walker." A swimmer escaping a war-torn country swims a capsizing raft with her sister across the Aegean Sea in "The Pull." An Eastern European orphan who's lost a hand is trained for a new job as a black market organ-runner. And that's just the first three stories.

There's a strange quality to Yuknavitch's stories, contradictions that rub up against each other. The stories are indeed strange, but the strangeness can become formulaic. Usually they begin with an off-kilter description of the protagonist. A girl understands herself "as a body inside out'" whose "blue veins standing out in her neck and at her temples made her look eerily like a map of Siberia." Then there's an overly-metaphorical central mystery meant to describe the protagonist's plight — this particular girl is a trafficked Eastern European prostitute in Portland. Finally, the story culminates, either in a series of charming turns of phrases or a last-minute twist — in this case, it's the former. "There is something from spine and ice that has yet to form a language ... one those bought-and-sold Eastern European girls are learning besides English: They are learning to gut themselves open so that others will run."

It all makes for some beautiful sentences, and also some deeply unsatisfying stories.

'The Book Of Joan' Is A Dizzying, Dystopian Genre Mashup

'The Book Of Joan' Recasts A Historic Heroine — In Space

Part of this is because Yuknavitch's use of metaphor is often far too on-the-nose, leaving one scratching one's head as to what "incarcerated rivers" are meant to connote. A woman waits at a drive through and is paralyzed by the prospect of a panhandler coming up to her window. She receives her food and sees "capitalism and youth emerging from the window." What does it mean for capitalism to emerge from a window? Does capitalism even need to emerge out of a window for the reader to understand that the story is about inequality?

A story of the unhappy woman whose lover is a "white male genius artist in San Francisco" is replete with the countless ways the woman feels her particular presence does not matter. The story is titled "A Woman Object (Exploding)." Scratch off some character details and it seems a bit like every other story has the same protagonist. Too often, Verge often provides a universalizing way of thinking of, say, class or gender by presenting a view of inequality and womanhood so monolithic and flattened that it wards off a reader's investment.

It all makes for some beautiful sentences, and also some deeply unsatisfying stories.

It is an uncertain collection. Some stories are wonderful, but most require more narrative space. "Cosmos," for instance, is about a cleaner at a planetarium who fashions the teenage customers' trash into a tiny city on his dining table. Constructing his tableau, he begins to see through the teenagers what the future could look like. "It all made perfect sense to him: These beings left traces of themselves in the objects they left behind, they represented of a new order of existence." One morning, the cleaner discovers a severed arm under a seat, and his sense of life itself falls into crisis: "He saw that his superficial efforts with refuse were the key, that decay itself was the giver of life ... He'd simply mistaken the act for the thing itself." "Cosmos" is evocative of Clarice Lispector's The Passion According to G.H. where the protagonist falls into sensory collapse after killing a cockroach. The only issue with "Cosmos" is that it is too short.

Elsewhere, Yuknavitch evokes two French writers with hypnotic and unflinching regard. A story of a girl growing up near a new prison is as bold about sexuality, addiction and even depravity as Leila Slimani's Adele. Another, about a girl inseminating her sister through an incestuous ritual, is depicted with as much ferocious commitment as Anne Serre's in The Governesses. When Verge presents womanhood by not taking the obvious path of contrasting women's actions with male agency, it is deeply insightful and riveting.

But one story towers above it all: "How to Lose an I," a story about a man adjusting to life after losing an eye in a tragic accident. It is here that Yuknavitch's gifts pay off in spades: for even in her most disappointing moments, she knows how to capture perception. "He is driving," she writes, "and California has a smell, orange trees and asphalt ... He is driving and memory moves his sight, his hearing, his heart beating." Unlike many of the other stories, here every single word is imperative.

It is with "How to Lose an I" that Yuknavitch's prose soars, expertly drawing the narrator's adjustment to life into a detailed exploration of the subjectivity of the self. There's no sense of flattening. The story reads like dispassionate journalism or detailed ethnography: like something focused. If only there were more like it.

Kamil Ahsan is a biologist, historian and writer based in New Haven. He is an editor at Barrelhouse and his work has appeared in the Los Angeles Review of Books, The American Prospect, Salon and Chicago Review.