Accessibility links
Dan Deacon On Talking To Trees, Brian Eno, Player Pianos And 'Mystic Familiar' The composer and electronic musician hit a wall while making his first solo album in five years. Finishing the record meant finding inspiration in everything from Brian Eno to a tree in his yard. 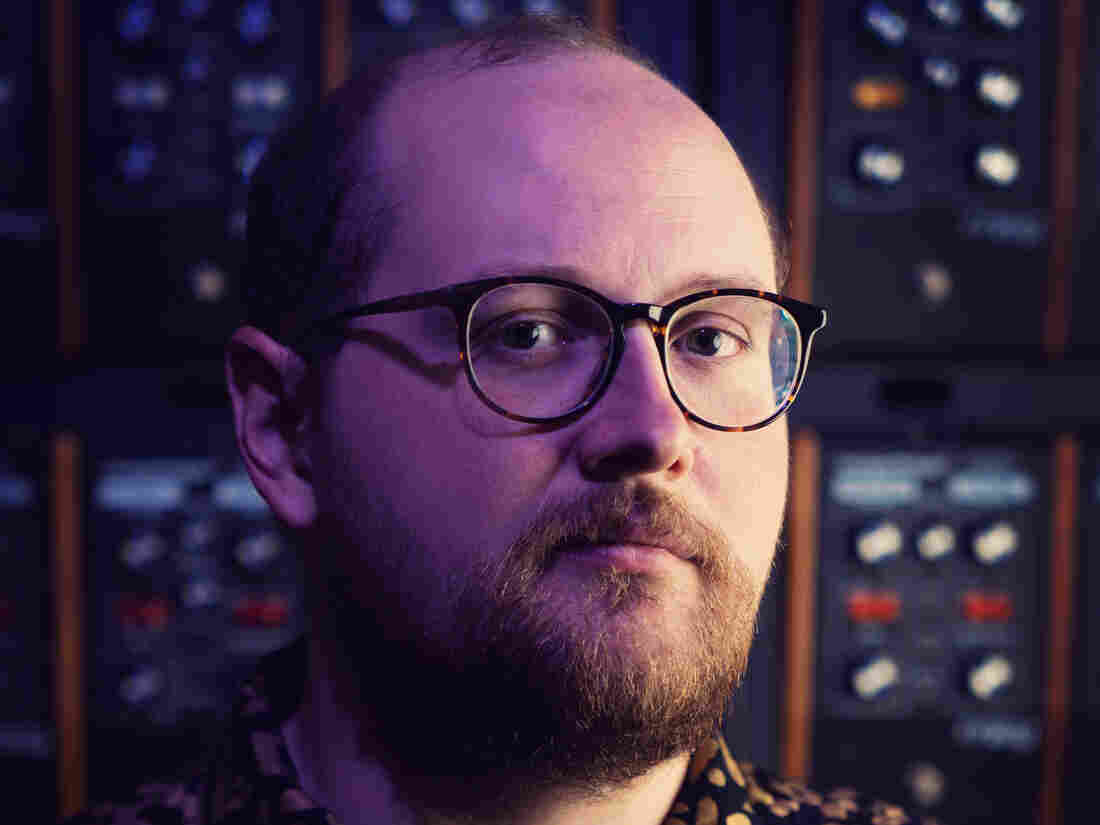 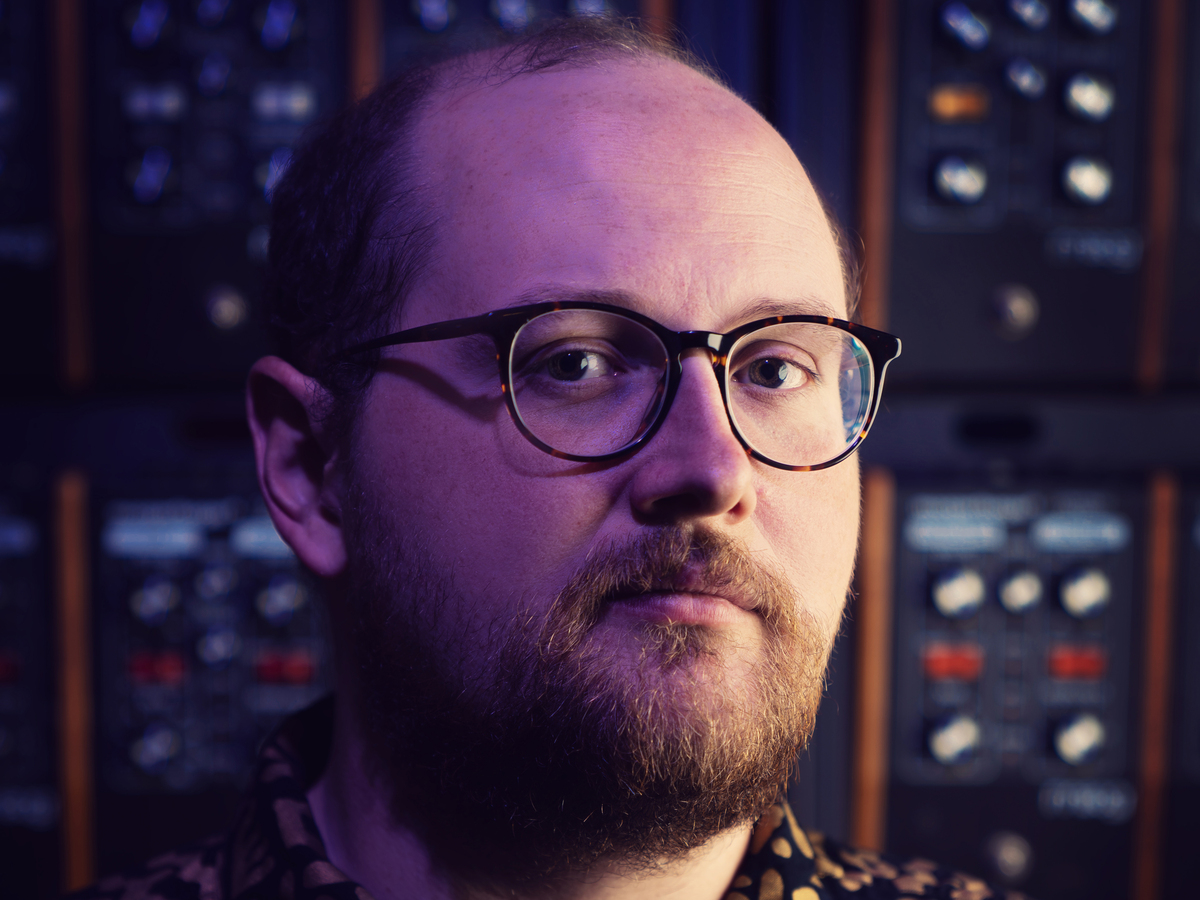 After working on film scores and collaborating with the New York City Ballet and the Baltimore Symphony Orchestra, Dan Deacon released Mystic Familiar, his first solo album in five years.

Dan Deacon's home studio is kind of a mix between a toy store and a science lab — for musicians. There are shelves of digital audio gadgets, multiple computers and monitors, synthesizers stacked on synthesizers and cables running between them all.

"I like how chaotic it is. I like to think about chaos in the way that a forest is chaotic," he says, describing the peace and uniformity of the trees from afar. But if "you get into it, there's piles of leaves, and you lift up the leaves and there's endless life crawling around in the muck."

Deacon's first solo album in five years, Mystic Familiar, is out now, and chaos certainly plays a role in his music. His songs are densely arranged, with layers upon layers of synths and drums jockeying to be heard.

Deacon's concerts, famously, are no less frenetic. At a recent show, he directed the audience to actually dance their way out of the venue; he didn't realize until it was too late that he was leading the crowd out onto a busy street where they wound up blocking several lanes of traffic.

For the past several projects, his collaborators have helped channel that chaos. Following a string of successful solo albums over the past decade and a half, Deacon worked as a producer, composed several film scores and collaborated with the New York City Ballet and Baltimore Symphony Orchestra.

But when Deacon sat down to work on Mystic Familiar, he was alone, and he hit a wall. "I would leave those collaborations and come into my studio solo, and all of a sudden be like, 'Where's the other voice to encourage me?' " he says.

Deacon often channels his inner voices in conversation, and a lot of the time they're self-critical, reminding him of fact that he took five years between albums with remarks like "Finish this record, what's wrong with you?" and "People keep asking when your next album is coming out."

Deacon felt he needed to change the inner monologue.

"If you think about that [being] what you're doing to yourself inside your own head every day," he says. "You have to change that system."

He used some traditional methods — therapy, regular meditation — but he also went down some more unorthodox paths. Deacon used his experience meditating to, in a way, replace those self-critical voices in his head. He created a whole cast of non-human characters for the album, which are captured in its title: Mystic Familiar.

"This whole record was thinking about characters, and different voices, and the nuance and quirks they have," he says. "A 'familiar' is a creature that you can communicate with in some sort of supernatural capacity. So like, Merlin's owl is a familiar. A witch's cat is a familiar."

Trees often play the role of the familiar on the album. The song "Weeping Birch" is named for a tree outside the window in Deacon's home studio that he focuses on while meditating. Another song, "Sat By A Tree," documents his experience seeking guidance from a tree.

"I think I was trying to ask the tree like, 'What should I do?' " Deacon says of writing the song. "And looking back, I can understand the tree was like, 'Oh my God, if I could get up and walk away from this guy, I would love to.' And then, eventually when I started embracing what the tree would actually say, it was like, 'Well, what would you do if you could relax enough to do it?' And that lyric ended up, in some sort of way, on the song."

Another collaborator Deacon summoned up to help him push through his writer's block was Brian Eno, although the legendary producer will not be getting any direct credit for his contributions.

"I think if I gave Brian Eno producer credits, I would get a cease and desist from Brian Eno's attorneys," Deacon jokes.

Eno, along with artist Peter Schmidt, designed a deck of cards meant to promote creativity, called "Oblique Strategies." Deacon used the cards extensively for both inspiration and encouragement while writing Mystic Familiar.

"So you just draw one of these cards and then you think about it says," Deacon says, picking up the deck. " 'Don't be frightened of clichés.' This one is great. And I was like. 'Alright. Yeah. Thank you!' Because my music is riddled in cliché and I needed to back up on that."

It wasn't just trees and imagined heroes who help inspire Deacon in his work. There were a few real live human musicians, and a very important non-human one: Deacon's player piano.

Unlike the old ragtime self-playing pianos that played from rolls of sheet music, Deacon's piano is controlled by a computer. On the first song on the new album, layer after layer of tracks all combine into one gargantuan piano army.

Some of the appeal of the player piano is that it can play things that humans physically can't, like the automated waves on "Become A Mountain." But the instrument still has limits.

When Deacon maps out a piano part on his computer, the digital version sounds perfect. "It's in direct time and every note is exactly as loud as the last one unless I tell the computer to change it," he says

But translate that same part to the player piano and the physical mechanics of the instrument mean the music comes out all wobbly. "It kind of halts a little bit sometimes and slows up and slows down," he says.

Deacon was initially unhappy that the parts he designed on the computer did not sound the way he wanted them to. "When I first started working with the player piano, I would be frustrated by these imperfections because I was a maniac and I was like, 'But it's a machine. It should be perfect,' " he says.

Over course of making the album, however, he learned to accept that kind of imperfection, and to see it as a strength of using the player piano.

"That's what makes the instrument beautiful," Deacon says. "Everything has limitations and everything has its quirks, and those quirks are what create character."

In the end, acceptance — of his instrument's limits and his own — was what all the meditation, the therapy, the weeping birch, the spirit of Brian Eno were pushing him toward, and it wound up being a central theme of the album.

In Deacon's own words, finishing the album was like making a feast for a big crowd.

"You can hold dinner for a little bit, but at some point it has to go out on the table, and I started thinking about it like that," he says. "There's things that in five years I will be better at, but I'm not in five years. I'm the me of now. And I need to make this record, that reflects this now."