Accessibility links
Trump Defiant After Senate Acquittal: 'I Did Nothing Wrong' The Senate found President Trump not guilty of the impeachment charges against him. "We went through hell, unfairly," he said in a statement at the White House. 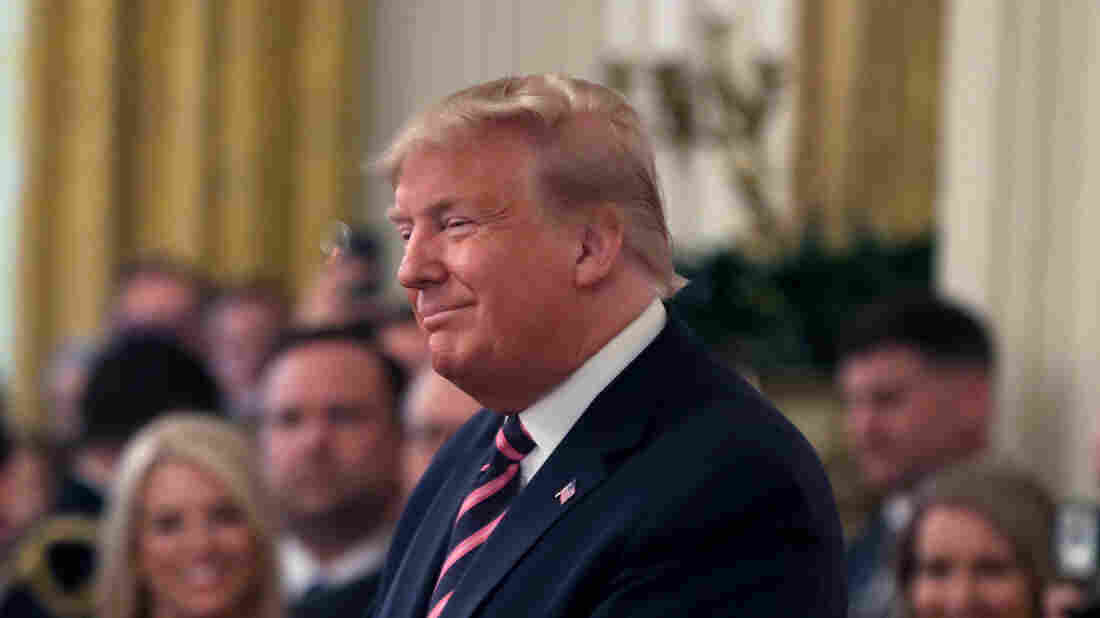 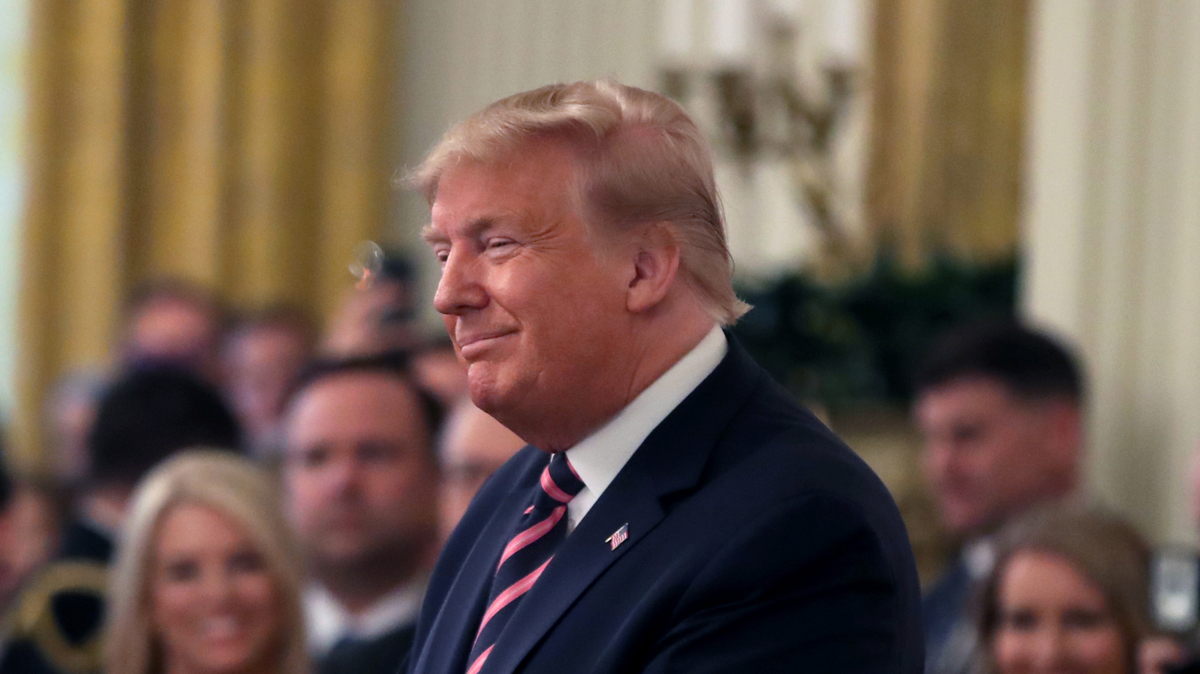 President Trump arrives to speak to the media, one day after the U.S. Senate acquitted on two articles of impeachment, on Thursday.

President Trump declared victory on Thursday, a day after being acquitted by the Senate on two articles of impeachment, and lashed out at his political opponents in lengthy extemporaneous remarks.

"We went through hell, unfairly. I did nothing wrong," he said in a public statement from the White House.

"It was all bulls***," he said, tracing his impeachment woes back to investigations into Russian interference in the 2016 presidential campaign.

Trump entered the East Room packed with Republican members of Congress, cabinet members, and other supporters as "Hail to the Chief" played. He triumphantly held up a copy of The Washington Post with the banner headline, "Trump Acquitted."

"It was evil, corrupt, it was dirty cops, there were leakers, liars — it should never have happened," he said. 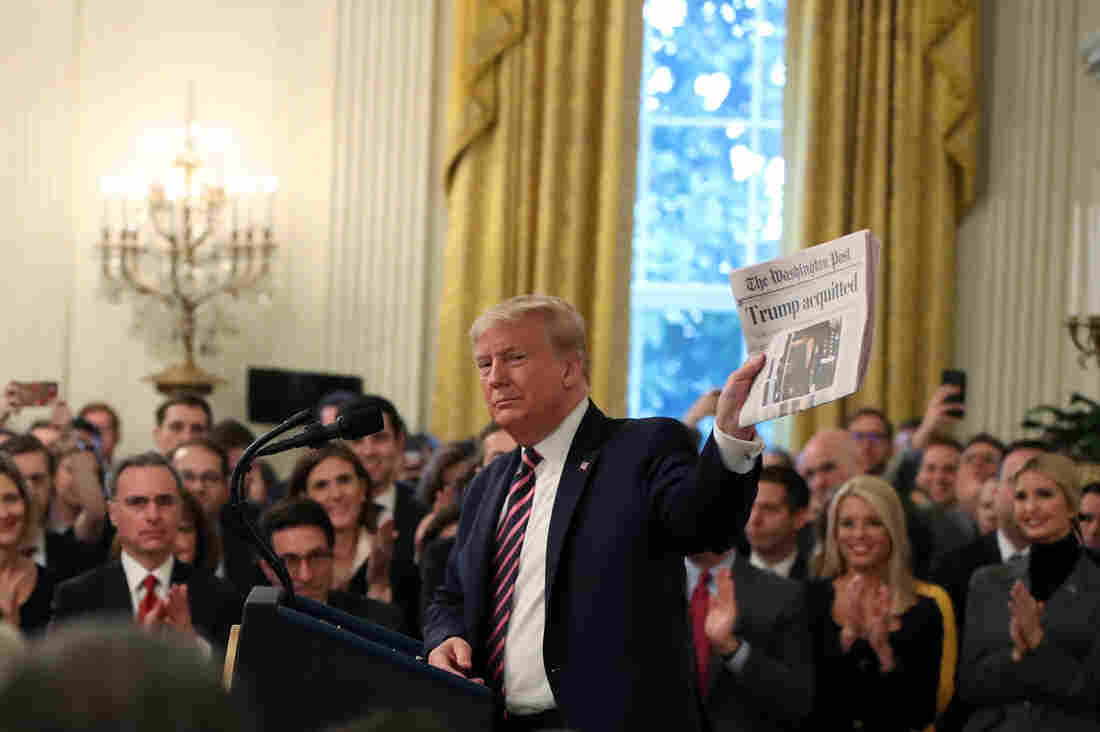 President Trump, surrounded by members of his administration and supporters, holds up a newspaper during remarks at the White House on Thursday. Mark Wilson/Getty Images hide caption

"Now we have that gorgeous word. I never thought a word would sound so good. It's called: total acquittal," Trump said.

Trump apologized to his family, "for having them have to go through a phony, rotten deal by some very evil and sick people." He then embraced daughter Ivanka and first lady Melania.

In his stream-of-consciousness remarks, which lasted over an hour, Trump spoke of his critics with vitriol.

He lashed out at some favorite targets, including former FBI Director James Comey, whom he called "a sleazebag," adding that if Trump hadn't fired him, "It's possible I wouldn't even be standing here."

He singled out Sen. Mitt Romney, R-Utah, the only GOP senator who voted to convict Trump. He said Romney, a devout Mormon, "used religion as a crutch," and that "things can happen when you fail so badly when running for president," referring to Romney's loss to Barack Obama in the 2012 election.

He called lead House manager Adam Schiff, D-Calif., "a corrupt politician," and referred to an earlier appearance at the National Prayer Breakfast. There, he said he doesn't like "people who say 'I pray for you' when you know it's not so," referring to House Speaker Nancy Pelosi, D-Calif.

"I had Nancy Pelosi sitting four seats away, and I'm saying things that other people wouldn't have said, but I meant them," Trump said in his afternoon speech.

In her own remarks on Thursday morning, Pelosi said that Trump is "impeached forever," referring to the House impeachment vote in December on charges of abuse of power and obstruction of Congress.

"No matter what he says or whatever headlines he wants to carry around, you are impeached forever. You are never getting rid of that scar," she said.

Pelosi said the president's comments about Romney and his faith were "without class."

"He can say whatever he wants, but I do pray for him, and I do so sincerely. He's talking about things he knows little about: faith and prayer," she said.

Another target of Trump's Thursday was Hunter Biden, whom Trump accused of profiting off his father, former Vice President Joe Biden.

"My kids could make a fortune," Trump declared, but said, "It's corrupt." Trump's oldest sons are currently running the Trump family business.

There has been no evidence that the Bidens acted improperly with regards to Ukraine. Read a fact-check of their activities here.

After the vote Wednesday, Trump immediately claimed that he had been "totally vindicated," following a months-long investigation that the White House called a "witch hunt" and a "hoax."

The administration has long insisted that the impeachment inquiry led by House Democrats was politically motivated.

At the center of the failed effort to remove the president was an attempt to get Ukraine to investigate Trump's political rivals, including Biden. Democrats allege that Trump withheld congressionally approved military assistance to Ukraine and a White House meeting as leverage for his own political gain.

The impeachment inquiry in the House and the subsequent Senate trial exposed ever-deepening political divisions.

In the end, Romney was the only Republican to break ranks.

The Democratic caucus stood united on both articles, including red-state Democrats whose votes were up in the air. Party leaders pledged to continue to pressure the Republican administration.

Schiff told NPR on Thursday that he would still like to hear from administration officials, including White House chief of staff Mick Mulvaney and Secretary of State Mike Pompeo, but noted, "We haven't made a decision about next steps in terms of investigation."