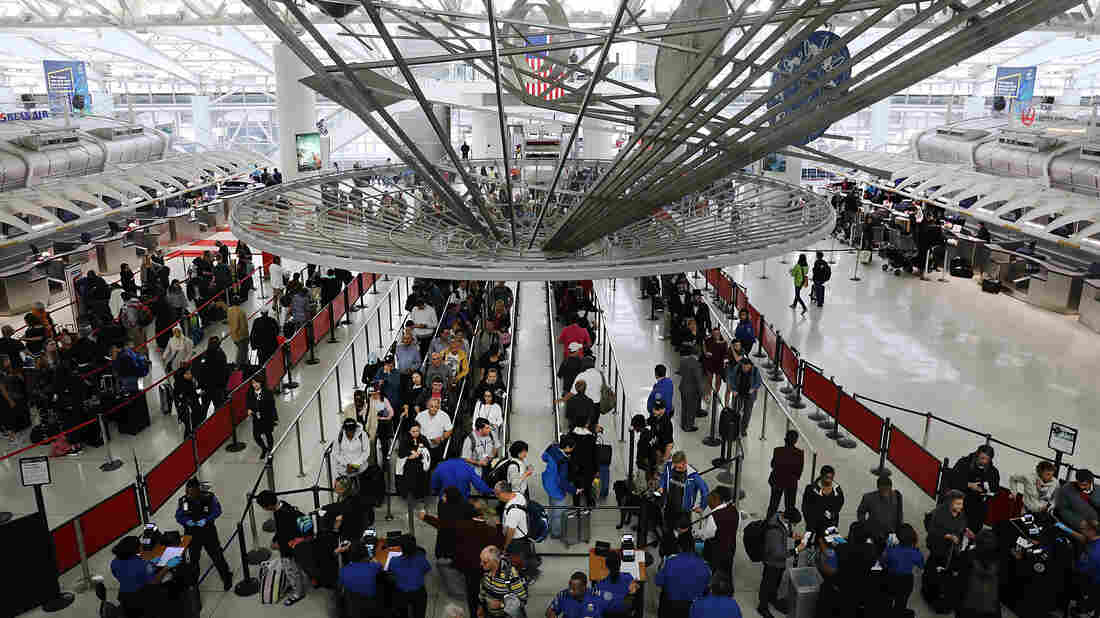 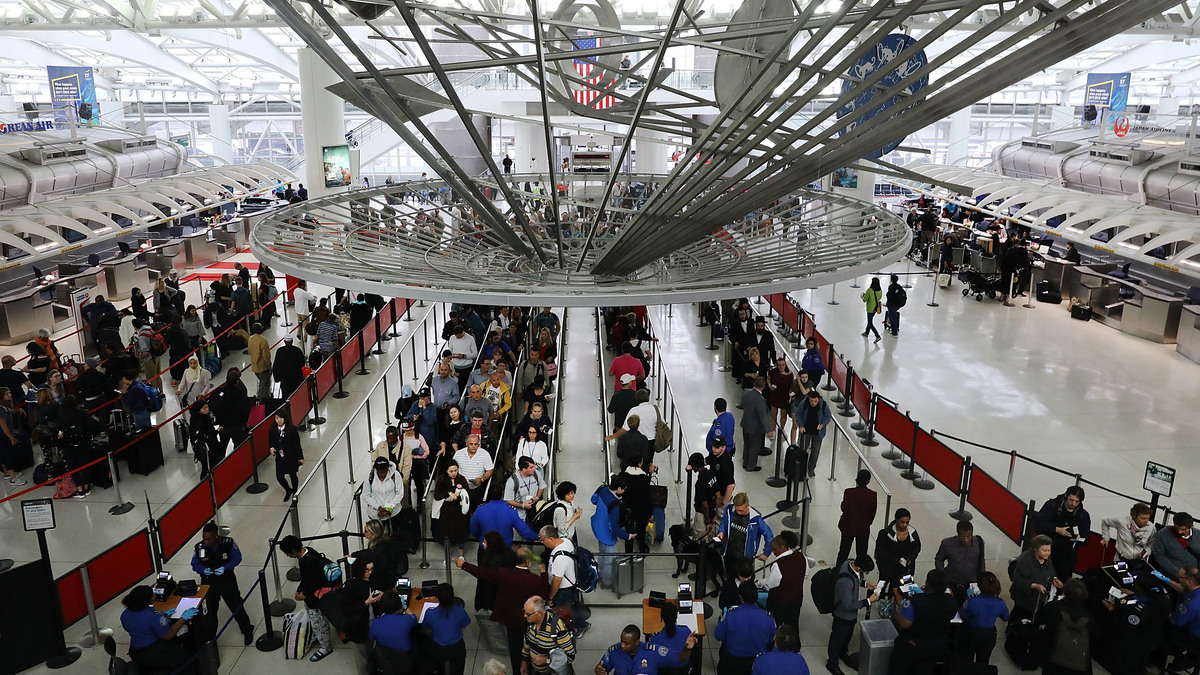 Travelers wait in the security line at John F. Kennedy International Airport in New York. On Wednesday, the Department of Homeland Security warned the state that it was freezing residents' access to Global Entry and similar programs, citing a recent state law that allows undocumented immigrants to obtain licenses.

The U.S. Department of Homeland Security says it will no longer allow New York state residents to enroll in programs intended to expedite international travel because of a state law that blocks immigration authorities from accessing motor vehicle records.

New York's "Green Light" law, which took effect in December, allows immigrants in the country illegally to apply for driver's licenses. More than a dozen other states do the same. But New York's law goes further: It prohibits officials with the state's DMV from sharing information with immigration authorities, unless a judge orders them to.

"President Trump certainly made it clear that if sanctuary city politicians — and sanctuary state, as well — won't keep their people safe, we'll do the best we can to keep them safe," Cuccinelli said.

He said his department has suspended all applications and renewals connected with several of its Trusted Traveler programs, such as Global Entry and NEXUS, which are designed to facilitate and speed up security screening at ports of entry. (TSA PreCheck is not affected.)

Cuccinelli said the New York law makes it more difficult for federal law enforcement officers to determine whether they're dealing with dangerous criminals. "Obviously, we would urge New York to undo that law and to restore some sanity to its own attempts to help preserve public safety," he said.

And he said the move represents a warning for any state legislators elsewhere who are considering following in New York's footsteps.

"We would urge them to reconsider," Cuccinelli said. "But at least know that if you go down that path, you are cutting their citizens off from a variety of privileges that currently exist and are available to those citizens."

A spokesman for New York Gov. Andrew Cuomo, who signed the state law in June, described the Trump administration's move as "political retaliation" and said the state is considering its legal options.

The Democratic governor, in an interview with member station WAMC, noted that the Trump administration — contrary to usual procedure — did not direct concerns to state officials privately before going public with the suspension. Cuomo says they did not receive a warning before the administration wrote them a letter Wednesday announcing the suspension.

"They never called. They never had a conversation. They sent a letter. They immediately did a press release and a press call," Cuomo told WAMC.

"And if they have to inconvenience New Yorkers to make their political points, so be it, because they're all about the politics."

In a statement released Thursday, the state's attorney general, Letitia James, pointed out that more than a dozen other states and the District of Columbia share similar laws. As for New York itself, the top prosecutor vowed that the state "will not back down."

"New Yorkers," James said, "will not be targeted or bullied by an authoritarian thug."

But DHS officials pointed to the difference with New York's law.

"Only one state cut off information sharing" with immigration authorities "& that's New York," DHS Press Secretary Heather Swift wrote in a Tweet. "Rather than resist, resist, resist, we welcome cooperation & coordination, like we've had since the Department's founding post 9/11."

The dispute threatens to damage relations between law enforcement agencies at the state and federal levels, says Theresa Cardinal Brown, an expert on immigration and cross-border policy at the Bipartisan Policy Center in Washington, D.C.

"DHS does have valid concerns with the severe and categorical restriction on access to DMV data in the NY state law," Brown tweeted.

But she also criticized the Trump administration for taking the debate public, instead of negotiating with New York state officials in private.

"Everyone loses in this scenario," Brown wrote. "Valid law enforcement interactions are restricted in the name of one particular policy or political aim. Meanwhile otherwise law abiding residents, regardless of immigration status, are caught in the cross-fire between levels of govt."