Accessibility links
Trump Blasts Romney Over Impeachment Vote During a White House speech, Trump attacked Utah Sen. Mitt Romney, calling him a "failed presidential candidate." Romney met with GOP leaders in his home state, where some in his party are upset. 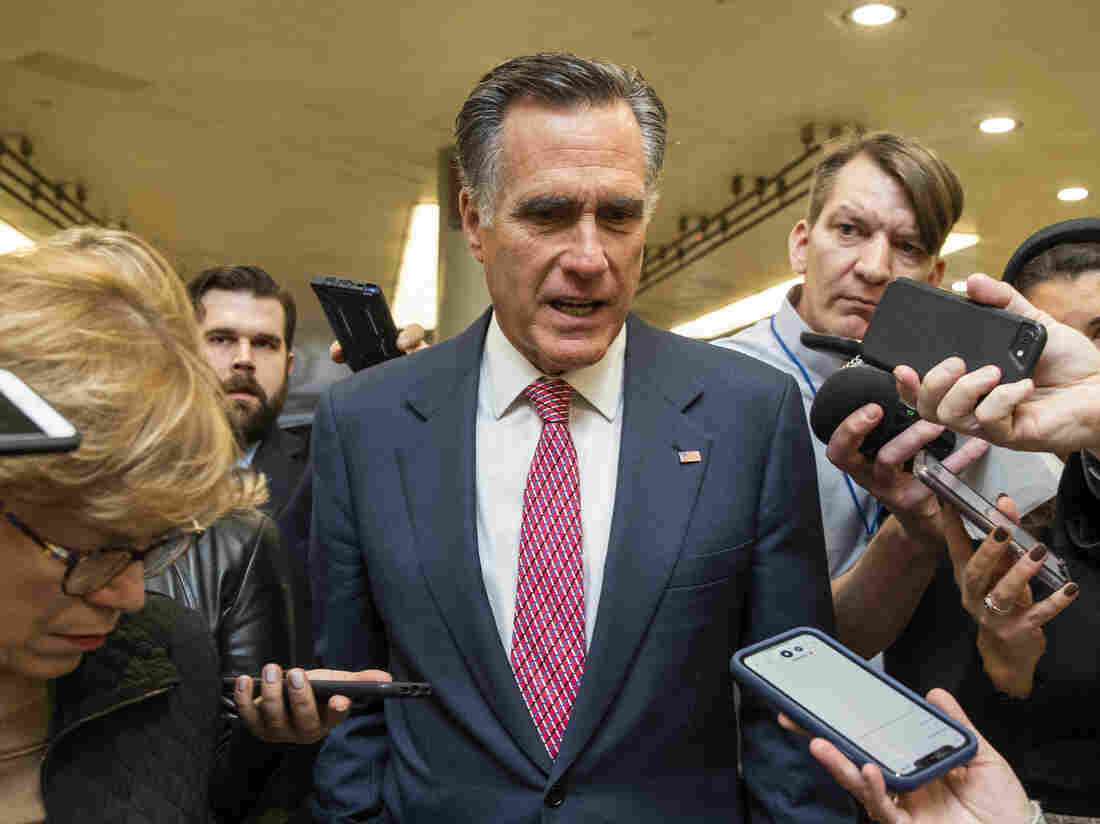 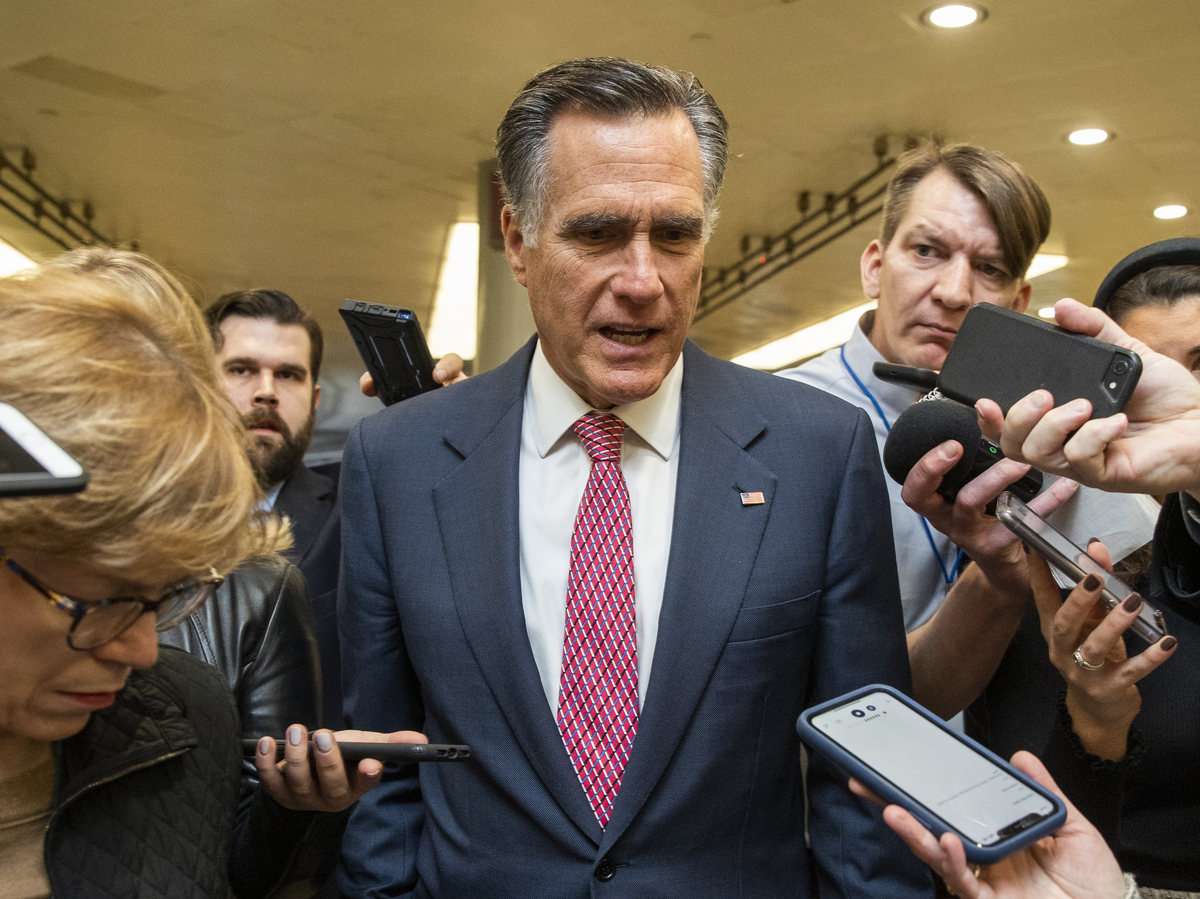 Sen. Mitt Romney, R-Utah, speaks to reporters as he arrives at the Capitol. On Wednesday, he became the first senator to vote to convict and remove a U.S. president of the same party.

In two separate speeches on Thursday, President Trump, buoyed by his acquittal in the Senate impeachment trial a day earlier, continued to lash out at the lone Republican who voted to convict and remove him from office — Sen. Mitt Romney of Utah.

But the president's ire against the former GOP presidential nominee began just after midnight when he tweeted his displeasure with Romney, while needling him for coming up short during his White House bid in 2012.

"Had failed presidential candidate @MittRomney devoted the same energy and anger to defeating a faltering Barack Obama as he sanctimoniously does to me, he could have won the election. Read the Transcripts!"

Romney's guilty vote against Trump on the Article I charge, abuse of power, had no impact on the all-but-certain final act of the president's impeachment trial. The first-term senator's decision to vote with all 47 Senate Democrats still brought the vote tally well short of the two-thirds of the Senate, or 67 votes, needed to remove Trump from office.

Romney made history by becoming the first senator to vote to remove a sitting president of his own party.

That move robbed Trump and his allies of the ability to label the impeachment proceedings a "partisan" affair, even as Romney joined the rest of the Senate Republicans in voting not guilty on the second charge facing Trump, obstruction of Congress.

"I don't like people who use their faith as justification for doing what they know is wrong," Trump said Thursday at the National Prayer Breakfast, a typically apolitical event.

That statement was a not-so-veiled reference to Romney, who said on the Senate floor ahead of his vote: "As a Senate juror, I swore an oath before God to exercise impartial justice."

Trump doubled down on his castigation of Romney during an East Room speech in which he declared victory.

"And then you had some that used religion as a crutch. They never used it before," Trump said. "But you know, it's a failed presidential candidate, so things can happen when you fail so badly running for president."

Trump later added, when addressing Utah's other Republican senator, Mike Lee, at the victory ceremony, "Say hello to the people of Utah. And tell them I'm sorry about Mitt Romney."

Mitt Romney is forever bitter that he will never be POTUS. He was too weak to beat the Democrats then so he’s joining them now.

He’s now officially a member of the resistance & should be expelled from the @GOP.

Bucking his party has led some, most notably Donald Trump Jr., the president's son, to call for Romney to be excommunicated from the Republican Party altogether. He tweeted: "Mitt Romney is forever bitter that he will never be POTUS. He was too weak to beat the Democrats then so he's joining them now. He's officially a member of the resistance & should be expelled from the @GOP."

In later tweets he added a hashtag: #ExpelMitt.

As a Fox News report points out, nothing in the Republican National Committee rules, adopted in 2016, allows for expelling someone from the party.

Bylaws amended by the Utah Republican Party late last year allow candidates to forfeit their party membership if they do not sign a candidate certificate agreement, which states they back the party's platform. If a candidate doesn't support portions of the platform, the candidate must itemize what those exceptions are.

As the Fox piece points out, that would not apply to Romney, a sitting elected official. But the state party tweeted Wednesday that it "strongly disagree[s]" with Romney's vote.

The Utah Republican Party is pleased to see President Trump completely acquitted by the United States Senate. We appreciate the service rendered to our state by Utah’s two senators. As a party, we strongly disagree with the vote cast today by Senator Romney.

Following the acquittal vote, Senate Majority Leader Mitch McConnell, R-Ky., was asked if Romney would be reprimanded for defecting from the rest of the Republican caucus. McConnell, who referred to impeachment as a "colossal political mistake" for Democrats, replied that Romney would not be rebuked.

"We don't have any doghouses here," he said. "The most important vote is the next vote."

Back in Utah, reaction was mixed to Romney's vote to remove Trump from office, as KUER's Sonja Hutson reported on Morning Edition. But the Salt Lake Tribune newspaper praised Romney, who is not up for reelection until 2024, saying the senator displayed a "profile in courage."

"Mitt Romney could have ducked this one," the editorial board wrote. "But when it was crunch time, Romney just could not avert his eyes from the fact that this president had, without a shadow of a doubt, abused his power as commander and chief."

Romney met Thursday at the State Capitol in Salt Lake City with GOP leaders who were upset with him about his vote. House Speaker Brad Wilson said they had a "very frank" discussion about it.

Some Republican lawmakers were discussing voting on a censure resolution as a way to preserve the relationship between the state party and the White House. Others in the state Senate wanted to move past the controversy and defended Romney's right to have his own opinions and break with his party when he thought it was the right thing to do.

An earlier version of this story misspelled Sonja Hutson's last name as Huston.