Accessibility links
Obama Portraits Will Go On Tour In 2021 The National Portrait Gallery unveiled the official portraits of Barack and Michelle Obama two years ago this month. Now it is sending them on a yearlong tour to five cities. 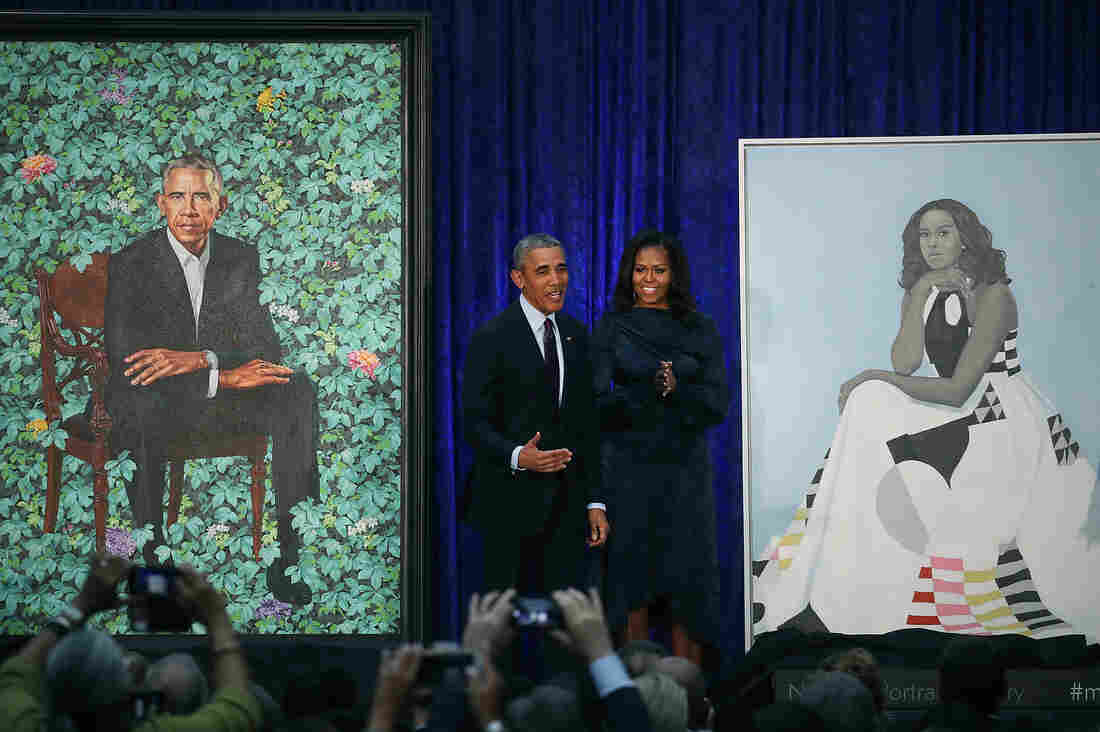 Former President Barack Obama and former first lady Michelle Obama stand next to their newly unveiled portraits during a ceremony at the Smithsonian's National Portrait Gallery on Feb. 12, 2018. The portraits are set to go on a yearlong tour to five cities in June of 2021. Mark Wilson/Getty Images hide caption 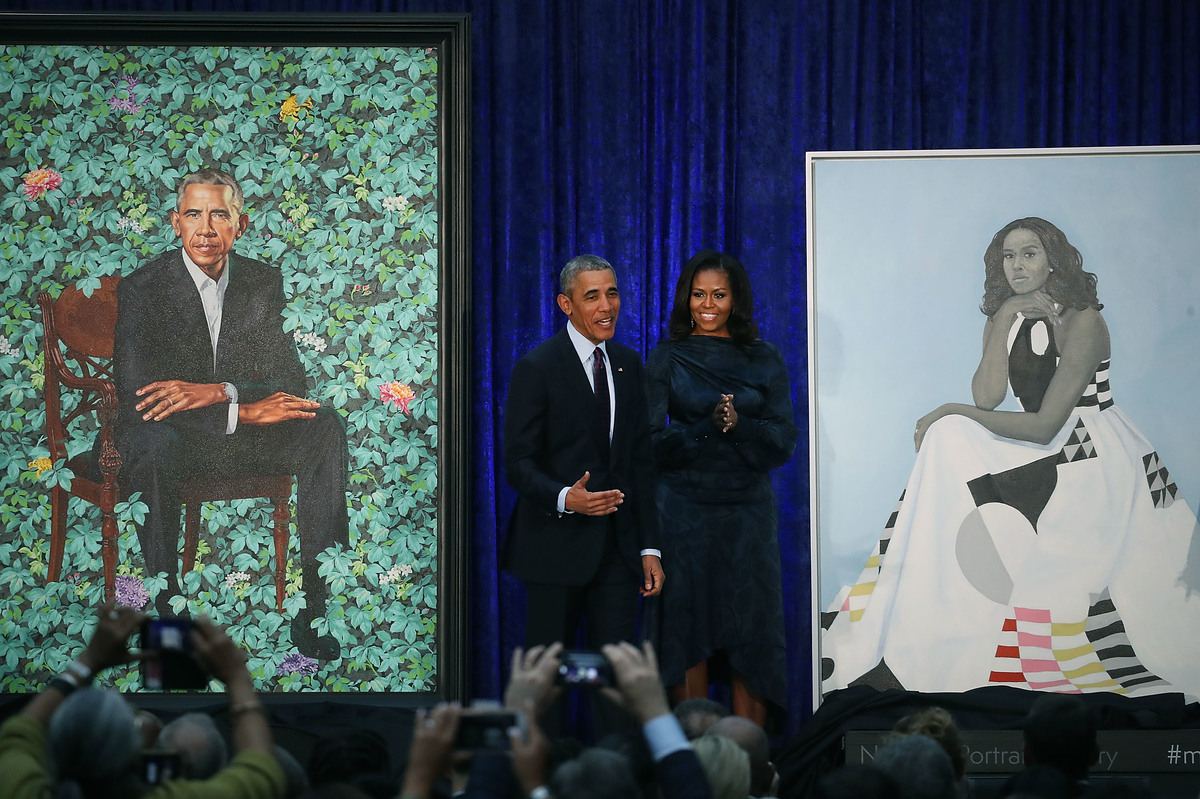 Former President Barack Obama and former first lady Michelle Obama stand next to their newly unveiled portraits during a ceremony at the Smithsonian's National Portrait Gallery on Feb. 12, 2018. The portraits are set to go on a yearlong tour to five cities in June of 2021.

The National Portrait Gallery unveiled its official portraits of Michelle and Barack Obama nearly two years ago. Since then, the gallery reports that attendance has nearly doubled.

Next summer, the portraits will hit the road to reach an even wider audience.

Behind The Obama Portraits: Artists Put Their Own Spin On A Presidential Tradition

In Washington, D.C., dozens of people line up behind velvet ropes every day to admire artist Kehinde Wiley's interpretation of the former president. It features Obama sitting at the edge of a wooden chair, surrounded by lush foliage. Pink and white flowers are dispersed across the canvas.

"I think that it demonstrates the one drop of color that we've had in our 45 presidents, which is significant in its own way," says Michael R. Jackson, one of many visitors at the gallery on a recent afternoon.

Upstairs, near 20th century figures such as Toni Morrison and LL Cool J, the portrait Amy Sherald painted of Michelle Obama is displayed behind its own ropes. The former first lady poses against a pastel blue background, wearing a geometric dress of pink, yellow, black and white.

Kim Sajet, director of the National Portrait Gallery, explains that the ropes and extra security framing the portraits are partially to control the crowds that gather, but also to provide an opportunity for people to take photos in front of the paintings without interruptions. 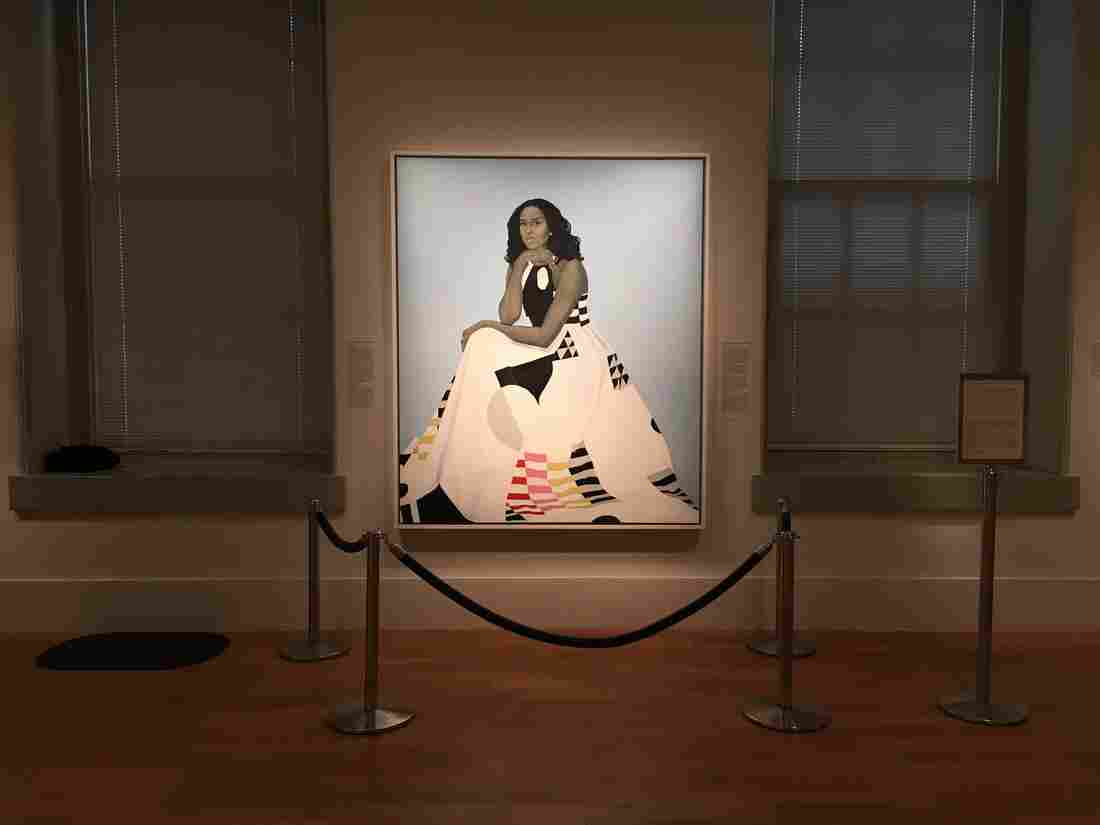 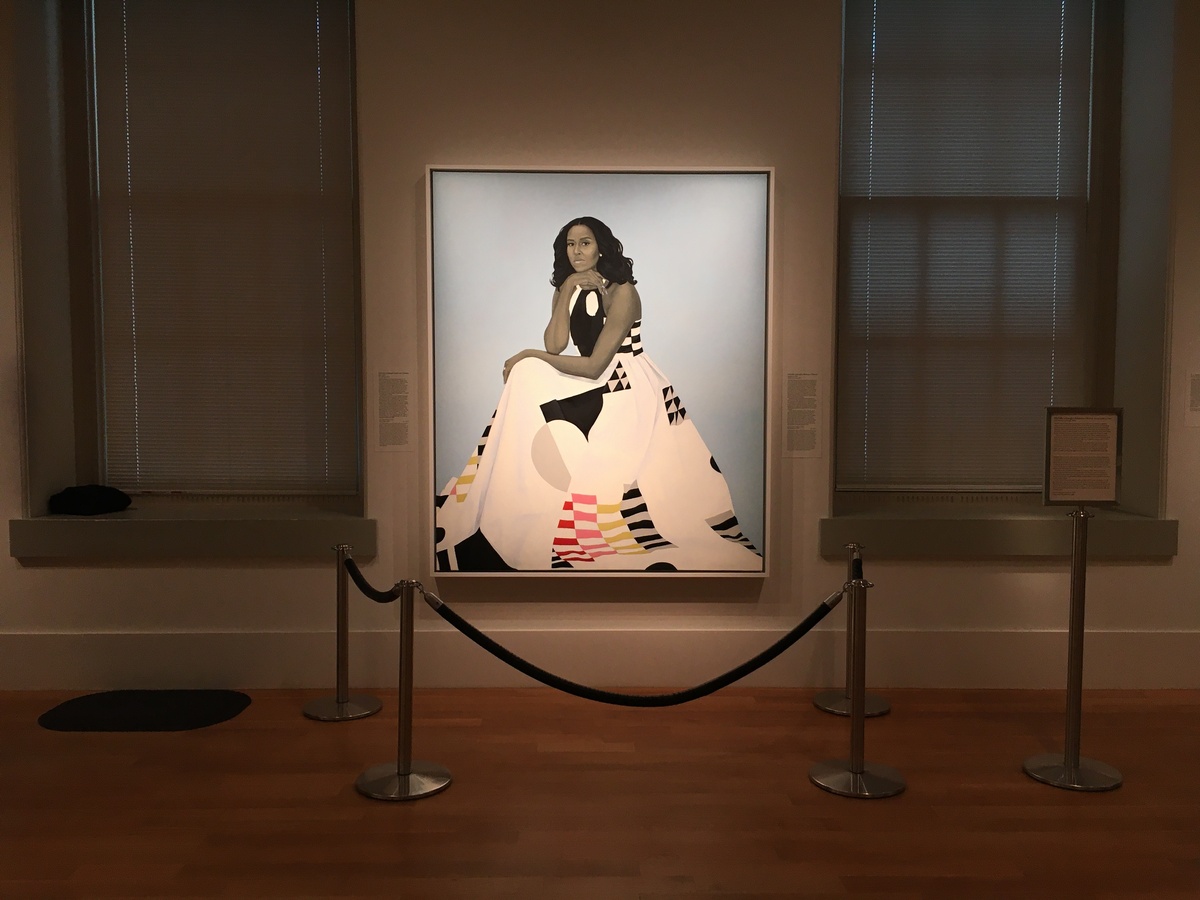 She credits Wiley and Sherald's artistic vision for much of the popularity of the pictures, which are a departure from some of the more conventional presidential portraits of the past.

"Portraiture used to be seen as this old-fashioned, fuddy-duddy, really for dead white people kind of way of painting," she says. "And it's just not true, and they've completely changed that and put it on its head."

Sajet says she began receiving calls from curators at other museums shortly after the unveiling, asking for an opportunity to host the artworks temporarily. Now five cities have been selected for the yearlong tour that kicks off in June of next year: Chicago, New York, Los Angeles, Atlanta and Houston. 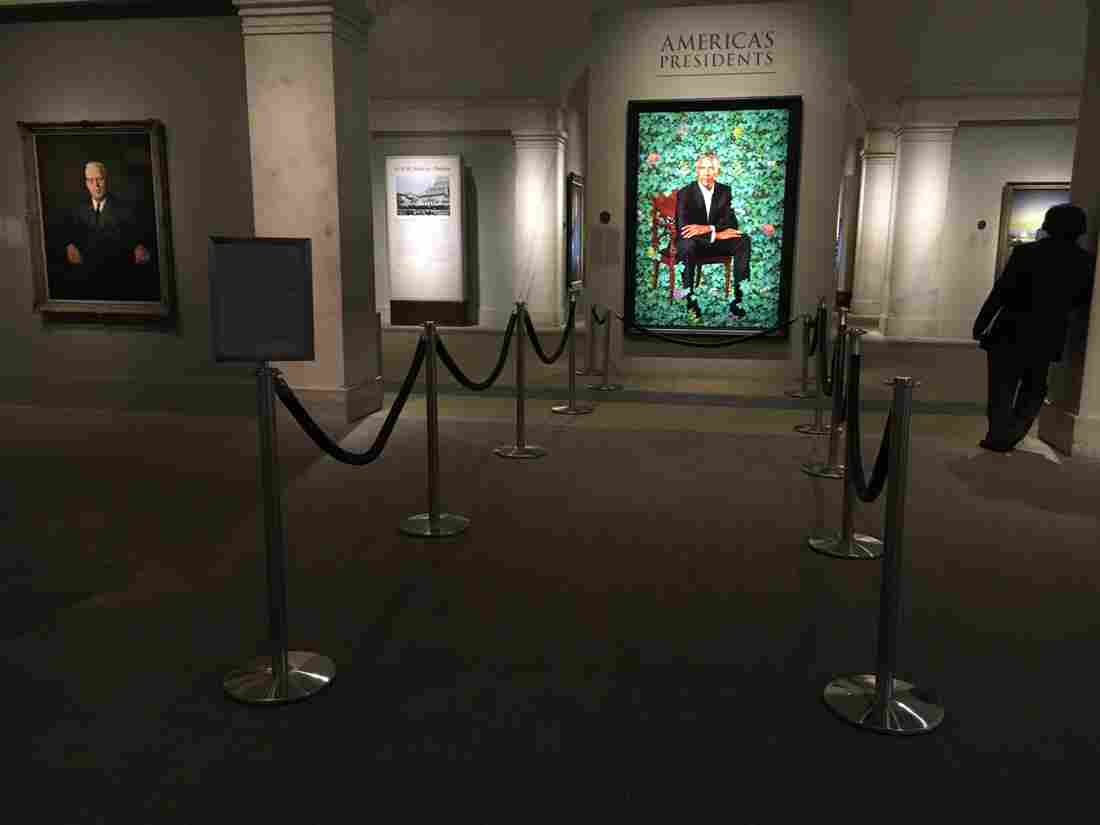 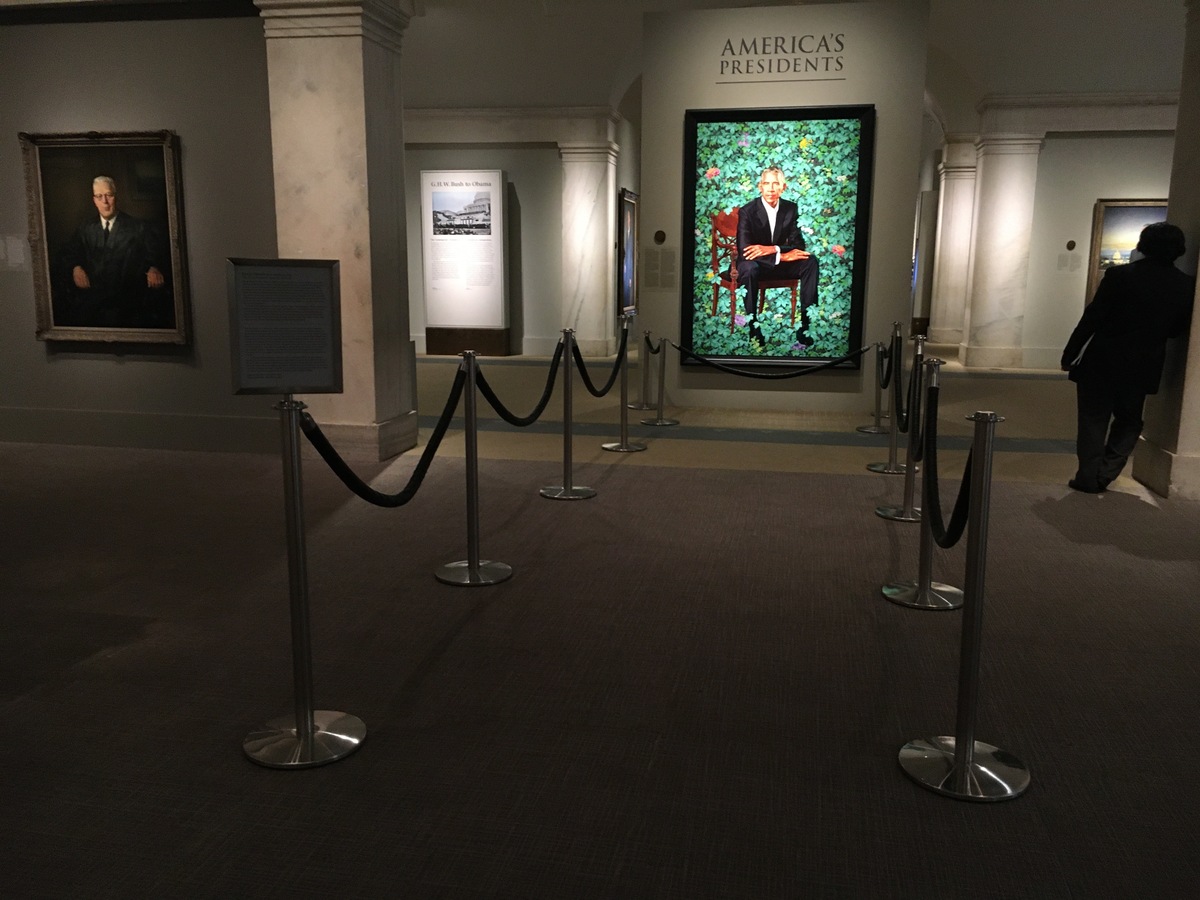 The Art Institute of Chicago will be the first stop.

"We have such a strong connection to the Obamas," says Kati Murphy, the executive director of public affairs at the institute. "They had their first date at the institute. Michelle Obama used to come to the museum as a kid with her family."

Each city will host the portraits for roughly two months. And because admission is free at the National Portrait Gallery, Sajet says she's working with each museum to bring costs down and give as many people as possible a chance to see them in person — especially students and young children.

Two years ago, a photo of then 2-year-old Parker Curry staring up at the Michelle Obama portrait in awe went viral. Curry later got the opportunity to meet the former first lady and even had a children's book about the experience published.

In 'Parker Looks Up,' A 2-Year-Old Shares A Moment With Michelle Obama

That's what drew Barbara Whitman to the gallery on a recent visit from New York.

"My takeaway from it is they both are such modern portraits and they really capture the time — the modern spirit of that presidency and how they took us to a new place," she says. "Hopefully we can continue going to new places."

The Obama portraits are not the first to go on tour, but Sajet still says there's something unique about their impact. Attendance at the National Portrait Gallery has nearly doubled since their debut.

"[Barack Obama's portrait] is much larger than I expected, and the colors are very beautiful, much more than I expected, too," says visitor Mary Ruth. "People need to see it in person versus actually seeing it on a photo on their computer screen."