Accessibility links
From Delivery Trucks To Scooter-Moving Vans, Fleets Are Going Electric Lime is all about electric vehicles — battery-powered scooters, that is. But now the company is also going to use plug-in vans for behind-the-scenes operations. And it's far from alone. 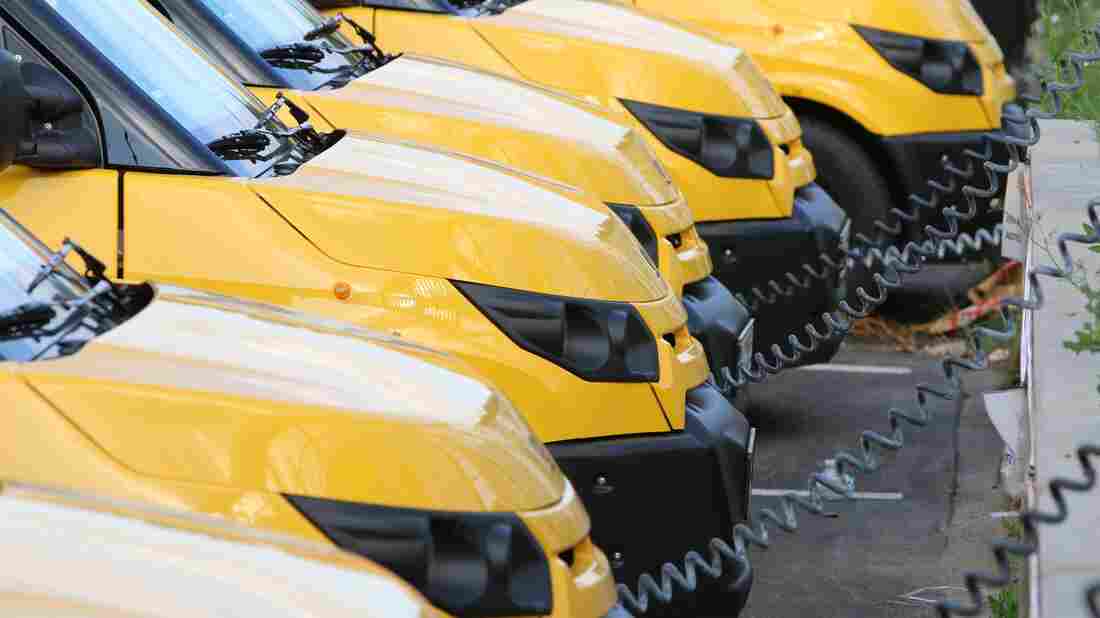 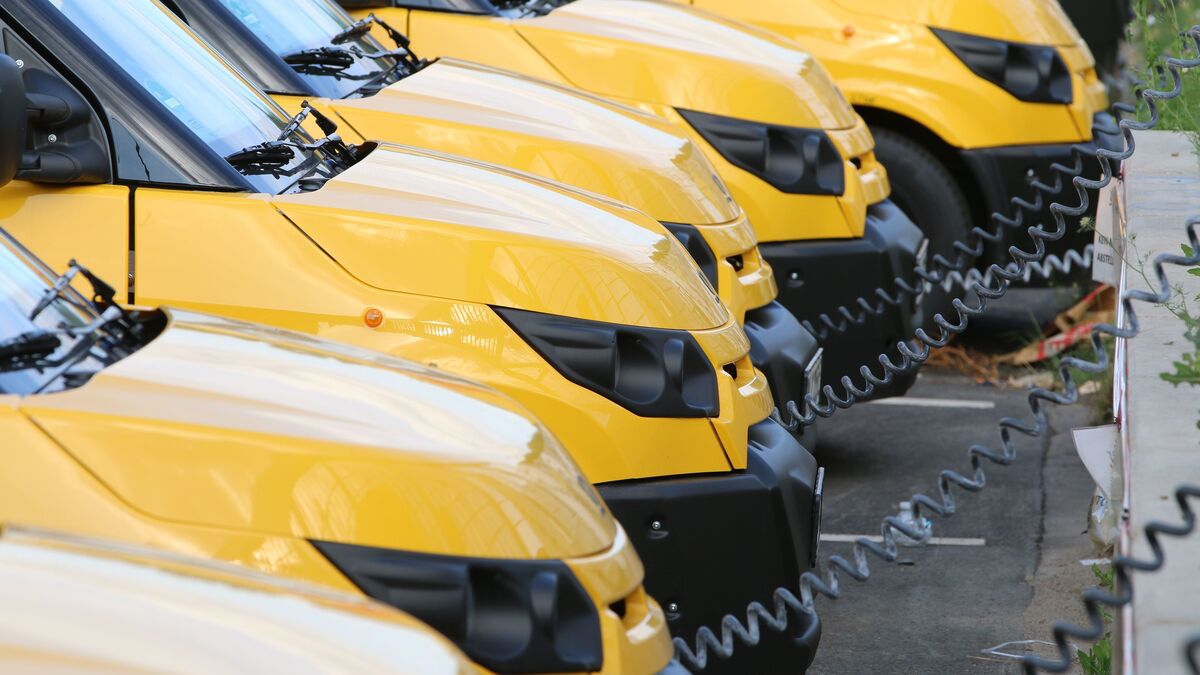 Electric vans charge at a warehouse of the German postal and logistics service Deutsche Post near Frankfurt in July 2018. Fleet vehicles are increasingly going electric in Europe and China, and some analysts say American fleets will be following suit.

As electric cars grow in popularity and visibility, experts say a revolution is coming in a place most people overlook: corporate and municipal fleets.

The scooter company Lime is the latest firm to announce that it plans to completely remove gas- and diesel-powered vehicles from its fleet and power its new electric work vehicles with renewable energy.

Lime is famous, of course, for electric vehicles — the small battery-powered scooters that have popped up on sidewalks across the United States. And as the world's largest scooter company, it promotes itself as an eco-friendly alternative to driving. But so far, some gas-guzzling is still involved behind the scenes.

"All of our scooters and e-bikes are already electric, already powered by renewables," says Andrew Savage, the head of sustainability at Lime. "We're going to take the vans and the vehicles used to manage those programs and transition those to zero emissions as well."

Lime's fleet isn't large — a few hundred vehicles for now. But the company is not alone in plotting the switch.

Lime, along with companies like Ikea and Unilever, is joining the EV100 initiative to commit to an all-electric fleet. Other large companies, such as DHL, Amazon and AT&T, have committed to "accelerating" the transition to electric fleet vehicles.

Millions of fleet vehicles are on the road — everything from delivery trucks and maintenance vans to police cars and school buses. Right now, less than 1% of those vehicles are electric, according to the consulting firm Guidehouse (formerly known as Navigant).

But in a decade, the group predicts that 12% of fleet vehicles will be plug-ins. That will mean a rise from about 2 million electric fleet vehicles now to more than 70 million in 2030.

"Given the life span of vehicles ... 12% [of the] population will require a significant portion of new vehicles sold being plug-in electric vehicles," says Guidehouse's Ted Walker.

Interest in sustainability will drive some of that growth. Companies like Lime that market themselves as climate friendly or have made climate pledges to investors and partners need to reduce the emissions from their fleets in order to restrain emissions. And around the world — particularly in Europe and China — government pressure is spurring investment in electric vehicles of all types.

But there are other factors too. In some ways, selling electric vehicles to companies is easier than selling one to an individual car owner.

Consider the price. "Electric vehicles are going to have a higher purchase price, but there's a lower maintenance, lower fuel cost," Walker says. Where an individual might focus on the sticker shock, a company is more likely to consider the lifetime cost of the vehicle.

Then there's range anxiety. It takes longer to charge a battery than to fill up a gas tank, and some people (particularly those who have never owned or leased an electric vehicle) worry that they'll go on a long trip and run out of juice. The concern is common even for drivers who very rarely drive long distances.

Fleet operators think differently; they know how far their cars go in a day, says Steve Burns, the CEO of Lordstown Motors. The Ohio startup is making a pickup truck specifically to sell to fleets.

"We are catering mostly to people that stay local — whether that's a florist, a landscaper, a police officer," Burns says. "[Our truck] can go 250 miles on a charge. Most of these type of folks go 60 or 70 miles a day."

There are some logistical challenges — fleet operators have to set up charging infrastructure in their garages or parking lots, for instance.

But there's another obstacle. Lordstown Motors' truck, the Endurance, isn't available yet. No mass-production electric pickup has yet arrived on the U.S. market. And in America, options for vans and other work vehicles are similarly slim.

"It's only a small handful, and the supply is actually quite constrained," says Savage, of Lime.

So companies are expressing their interest in electric fleets partly as a signal to automakers — that they need to catch up with demand.