Accessibility links
Pope Francis Turned A Vatican Palazzo Into 'Palace Of The Poor' For Homeless People "If you sleep on the ground covered in cardboard and have to wake up at 5 a.m. before the police come to shove you away, and then you find a place like this, what more do you want?" a new guest says. 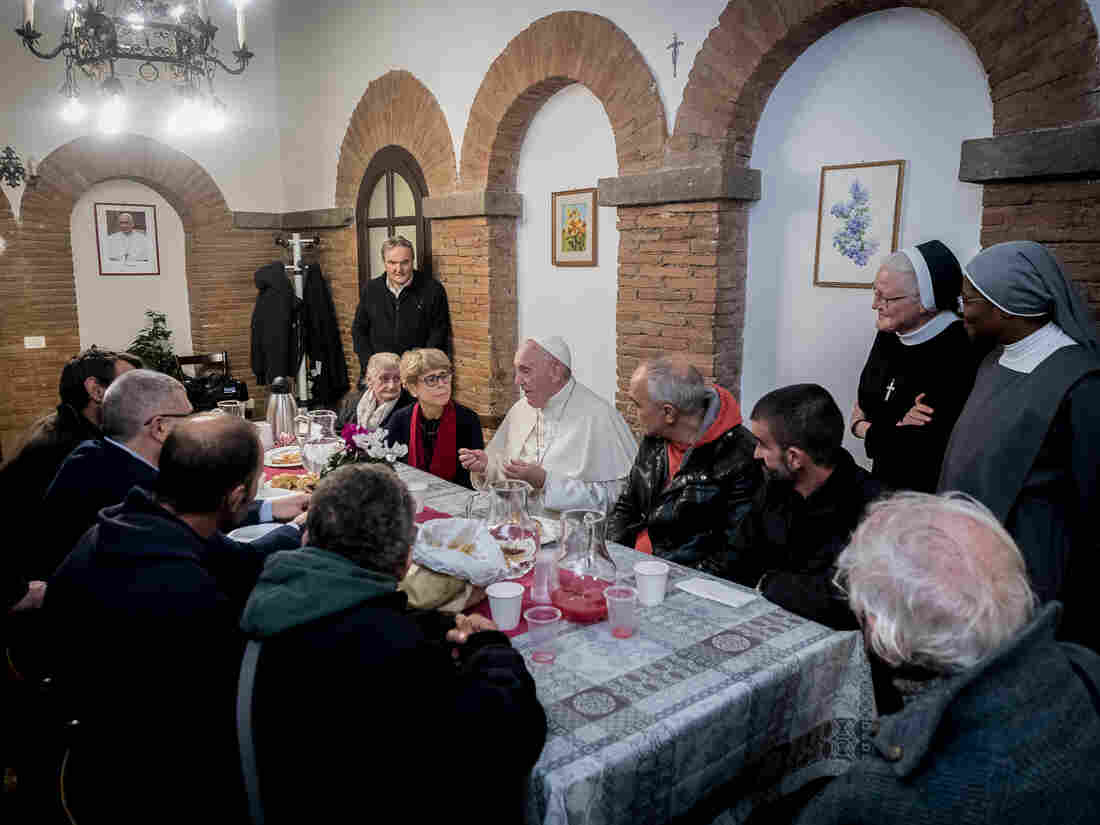 Pope Francis shares a meal with guests and volunteers of the "Palace of the Poor." Community of Sant'Egidio hide caption 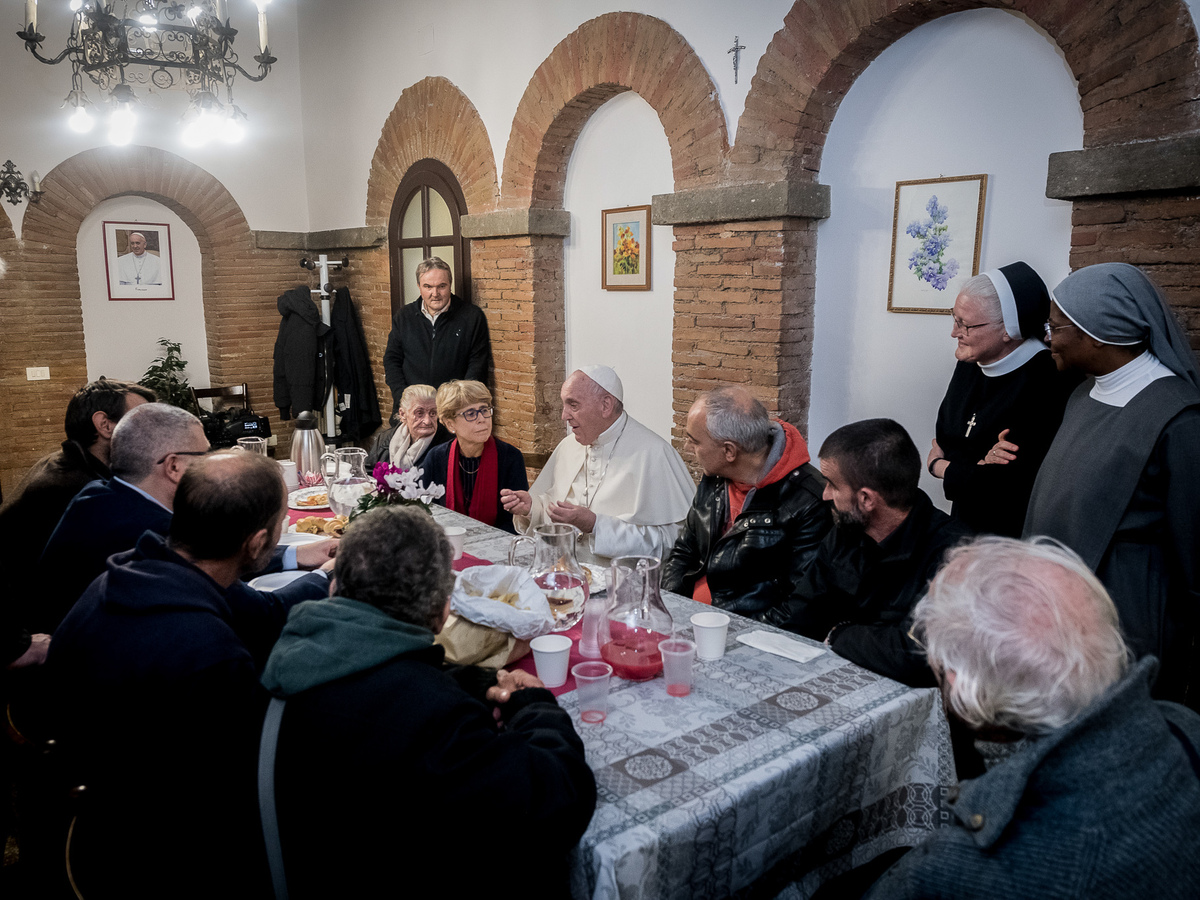 Pope Francis shares a meal with guests and volunteers of the "Palace of the Poor."

As the bells of St. Peter's Basilica ring out from the Vatican on a chilly January evening, a few people huddled in shabby clothes stand a few yards from the colonnade encircling St. Peter's Square.

They are waiting to enter the Palazzo Migliori, a 19th century palace just behind the square.

One of them is Livia, an Italian woman in her 60s. After having slept on Rome's streets for months, she has been spending nights since early December in what has become known as the "Palace of the Poor."

She won't give many details of her past, and like most palazzo guests, is unwilling to share her full name. But she says her life has radically changed since she found this home.

"During the day, I take some wonderful walks," says Livia. "I've visited lots of churches — especially during Christmas, when they display Nativity scenes. And then I go to the library, because I love to read." 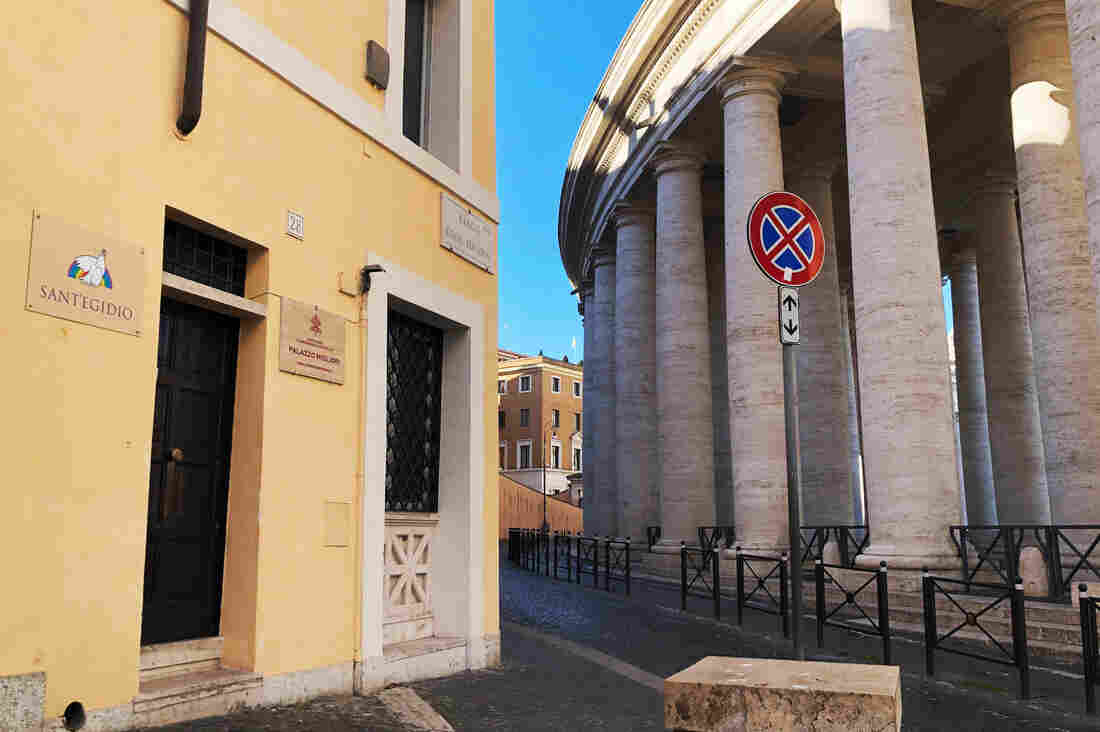 The 19th century Palazzo Migliori (left) is situated on prime real estate near St. Peter's Square. The colonnade encircling the square can be seen at right. Sylvia Poggioli/NPR hide caption 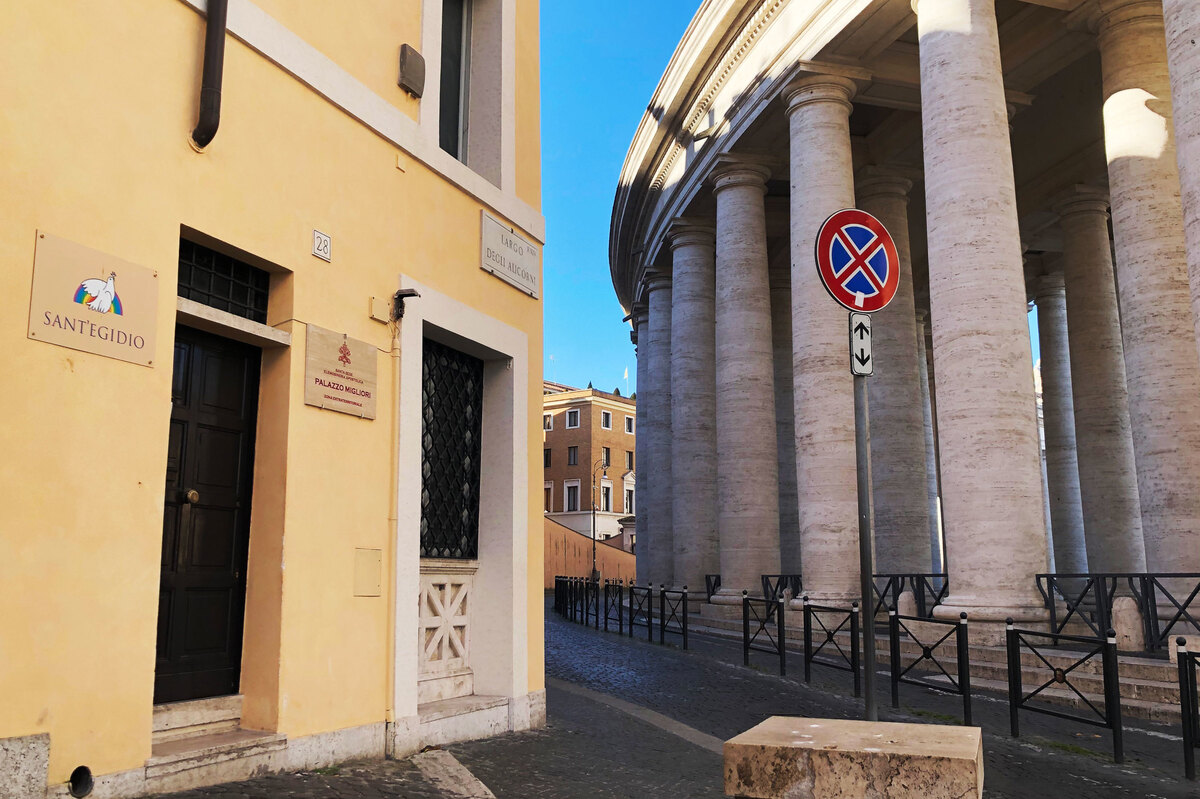 The 19th century Palazzo Migliori (left) is situated on prime real estate near St. Peter's Square. The colonnade encircling the square can be seen at right.

The building was named after the noble family that donated it to the Vatican in 1930. For 70 years, an order of nuns ran it as a home for single mothers. After the nuns relocated, some Vatican officials proposed to turn this prime real estate into a luxury hotel.

Instead, Pope Francis ordered it to be transformed into a home — or rather, says director Carlo Santoro, a palace — for "nobles of the streets," those who "Francis says society treats as rejects, victims of today's throwaway culture."

Rome's municipal- and church-run shelters for the city's thousands of homeless people tend to be Spartan. But this three-story building's carved wooden ceilings, frescoed walls and tiled floors are evidence of its aristocratic origins.

It can accommodate up to 50 men and women, housed in 16 rooms with two or three beds each. There are 13 new bathrooms, each equipped with a shower. Hot meals are served twice a day. The shelter also provides medical assistance and psychological counseling for alcoholism. Guests are not given a deadline to leave.

Many will not reveal their last names and are reticent to explain why they ended up homeless. Fragments of conversations provide glimpses of pain and grief — lost jobs, marriage break-ups or mental health issues. 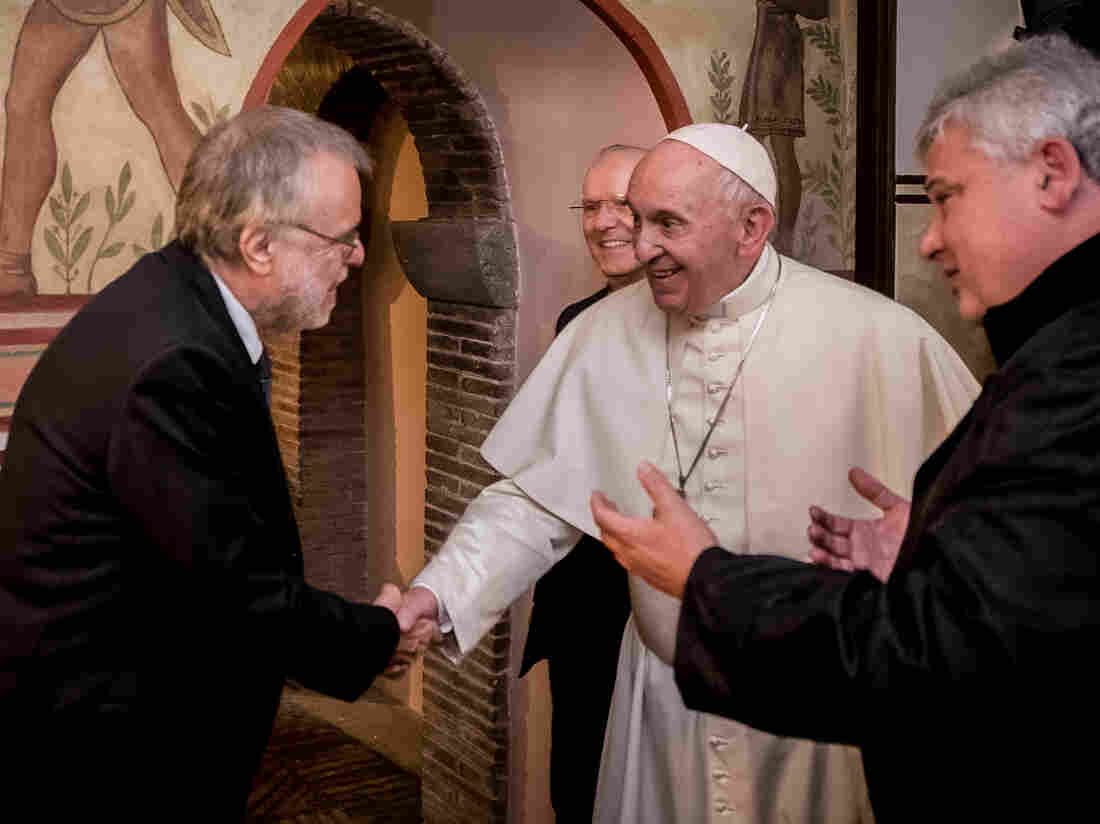 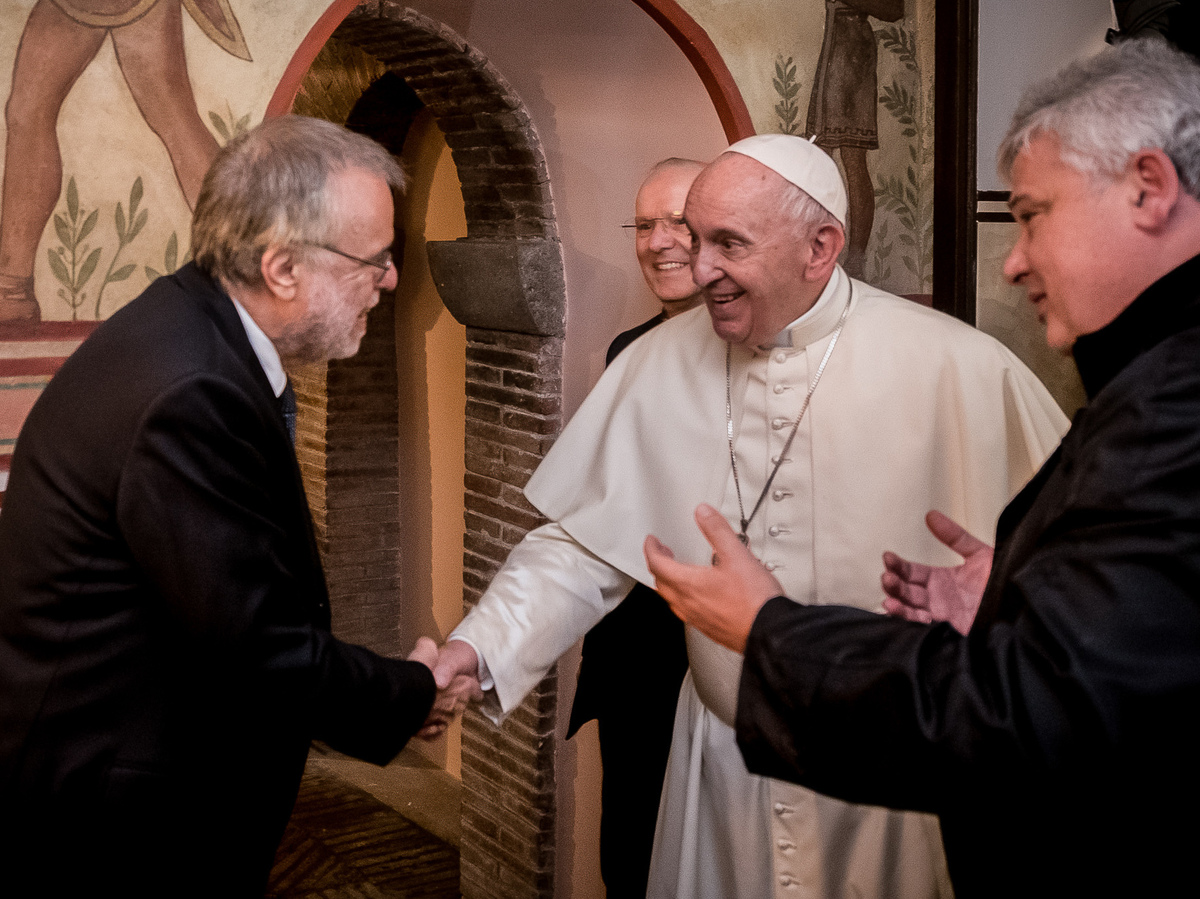 The pope shakes hands with Andrea Ricciardi, the founder of the Community of Sant'Egidio, the lay Roman Catholic group whose volunteers run the new homeless shelter.

What they all now share is relief from anxiety and some hope for the future.

Silvano, a Romanian, has lived in Italy for 15 years — the last eight as a homeless person. He often spent damp, cold nights sleeping under the colonnade designed by 17th century artist and architect Gian Lorenzo Bernini, which he can now gaze at from his warm and cozy bedroom in the palazzo.

"If you sleep on the ground covered in cardboard and have to wake up at 5 a.m. before the police come to shove you away," he says, "and then you find a place like this, where you have breakfast, showers, a bed and dinner, what more do you want?

In November, the pope came to inaugurate the "Palace of the Poor," sharing a meal, talking and joking with guests.

Santoro remembers what Francis said as he admired the palazzo's interior: "'Beauty heals.' That is to say that the beauty of this house is very useful for them just to recuperate. So that's our first aim, just to help them."

Since the Palace of the Poor opened in November, Santoro says several guests have found regular jobs and two have rejoined their families in northern Italy. Santoro says those who remain can count on the palazzo as a haven.

"Because every person, every human being has the right to be respected," he says. "The right to have a good life, good health, and the house, too, and the family around. So in many cases, we feel like the family they have, they've been missing for a long time."