Accessibility links
5 Takeaways From The Virtual Tie Out Of Iowa Between Buttigieg And Sanders Iowa's results still aren't quite settled, but it's clear former South Bend, Ind., Mayor Pete Buttigieg and Vermont Sen. Bernie Sanders finished in what was essentially a tie. What does it all mean? 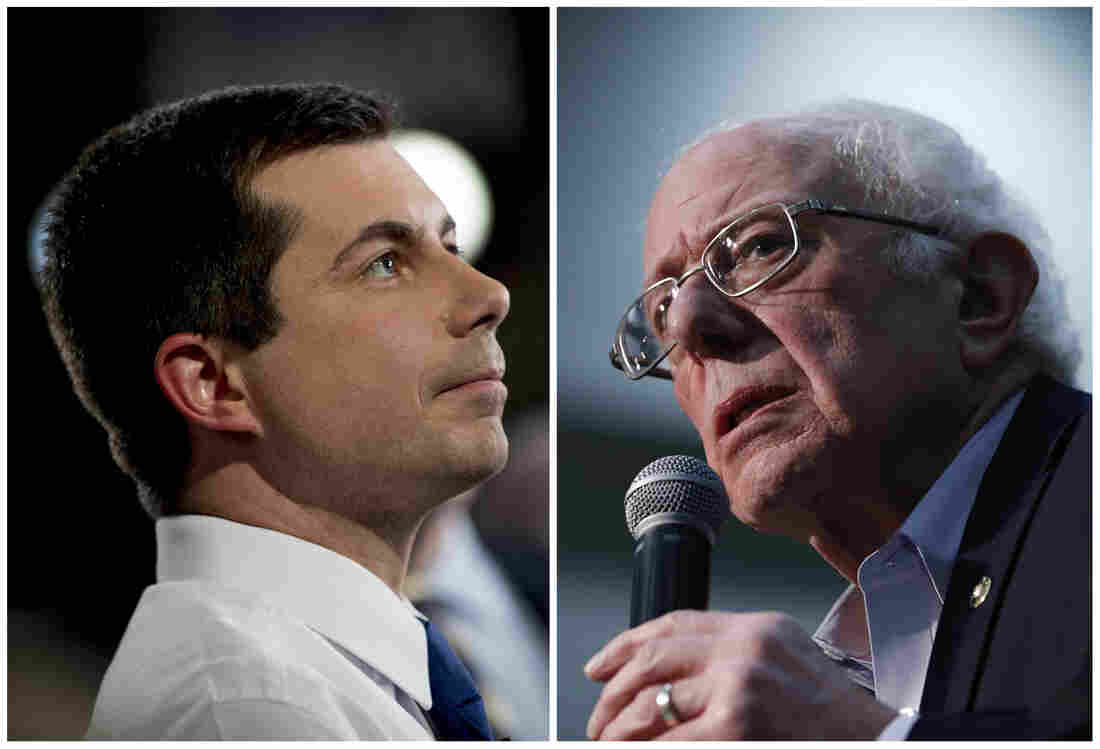 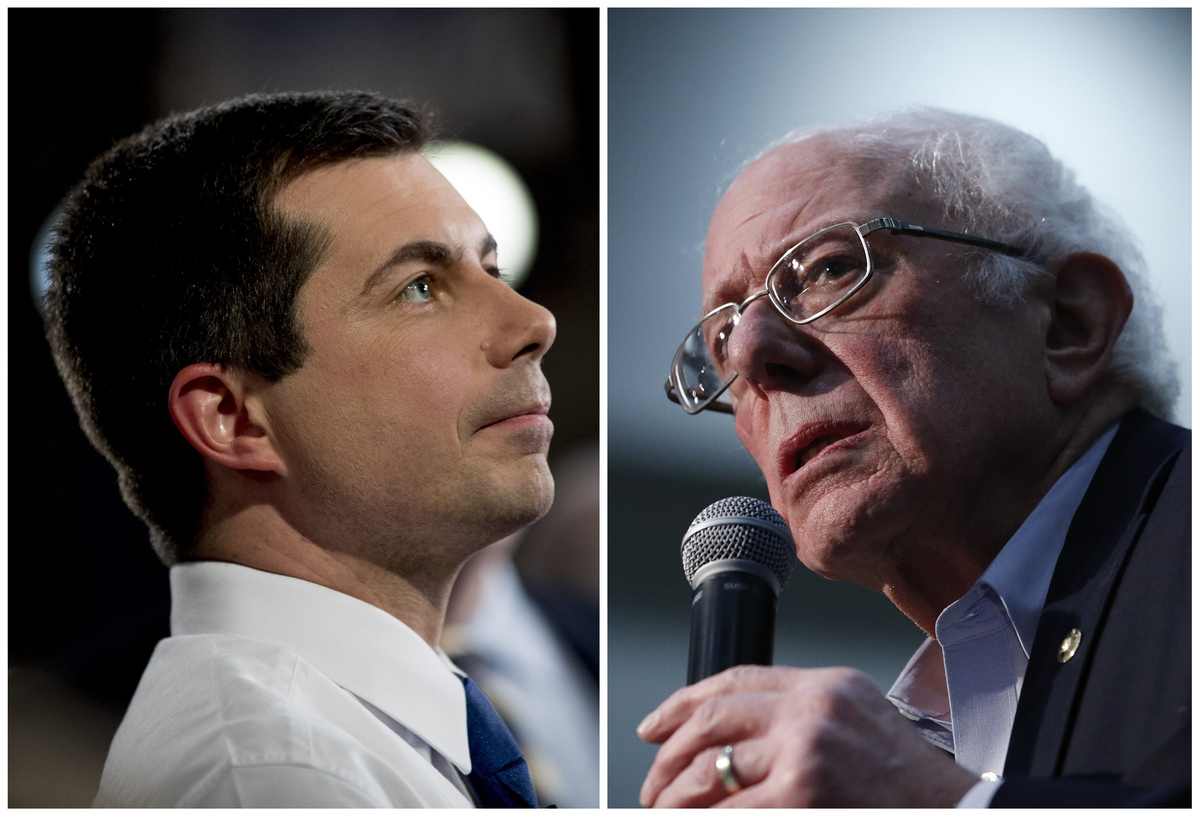 Former South Bend, Ind., Mayor Pete Buttigieg (left) and Vermont Sen. Bernie Sanders in Iowa. After a year of intense campaigning, they finished in a virtual tie in the Iowa caucuses.

At this point, it's pretty much time to move on.

The New Hampshire primary is days away, and the results out of the Iowa Democratic caucuses are still in question.

The Associated Press, which NPR and lots of other news organizations rely on to call winners and losers, said it will not be calling the race at this point, despite all votes being in, because of irregularities in the vote count.

"[T]here is evidence the party has not accurately tabulated some of its results, including those released late Thursday that the party reported as complete," the AP said Thursday night, as the final results rolled in.

The Iowa mess may continue, but as the political world's focus shifts to New Hampshire, we can say this — Pete Buttigieg and Bernie Sanders are in a virtual tie in Iowa; Massachusetts Sen. Elizabeth Warren finished third, several points behind; and former Vice President Joe Biden was fourth, with Minnesota Sen. Amy Klobuchar on his heels.

And here are five takeaways from those results:

1. Buttigieg and Sanders did not get to bask in the moment.

The impact of the Iowa mess is clearly biggest on Buttigieg. Look at it this way — when this campaign began, people couldn't pronounce his name; he was far down in the polls; and he's gay. Yet Buttigieg finished in a virtual tie with Sanders, who is as well-known a politician as anyone in the country.

Of the two, Buttigieg most needed an Iowa good-news bounce. That was denied him by the results fiasco that sucked up all the oxygen in the political room. Sanders, too, lost the opportunity for days of good press and headlines.

What that means for either candidate going into a state that can reinforce or reset a previous electoral result is unclear. For what it's worth, a Monmouth University poll out Thursday showed Sanders leading in New Hampshire, followed by Buttigieg. Biden is on the decline (more on that below). 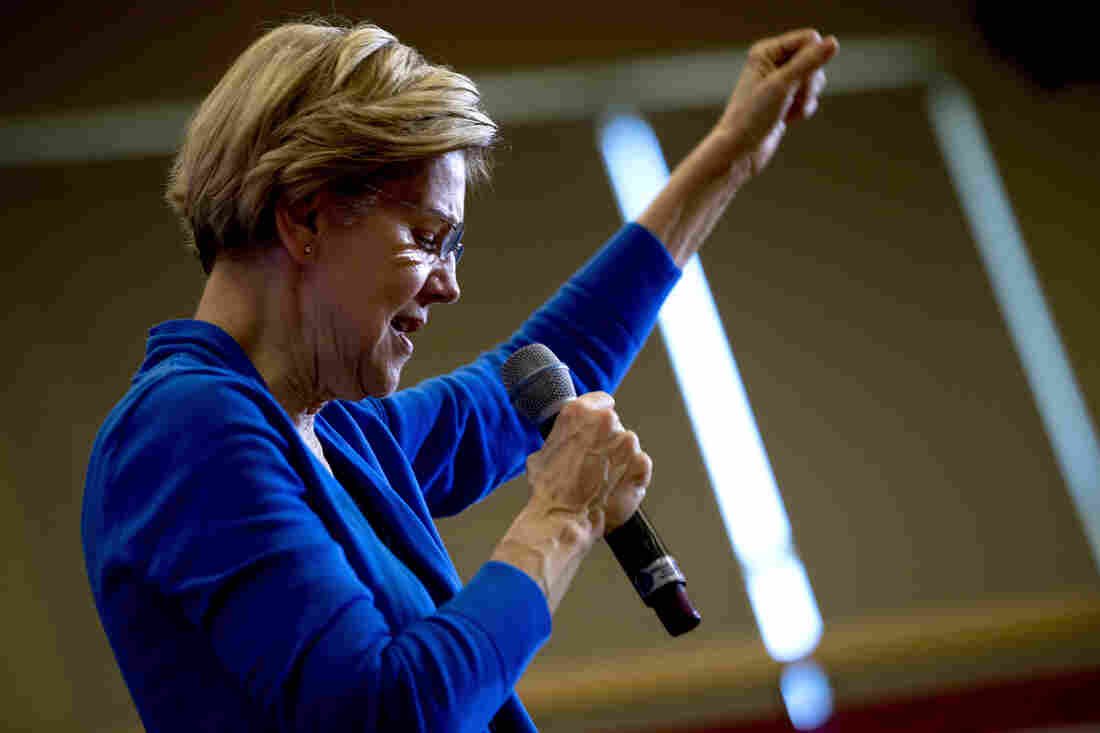 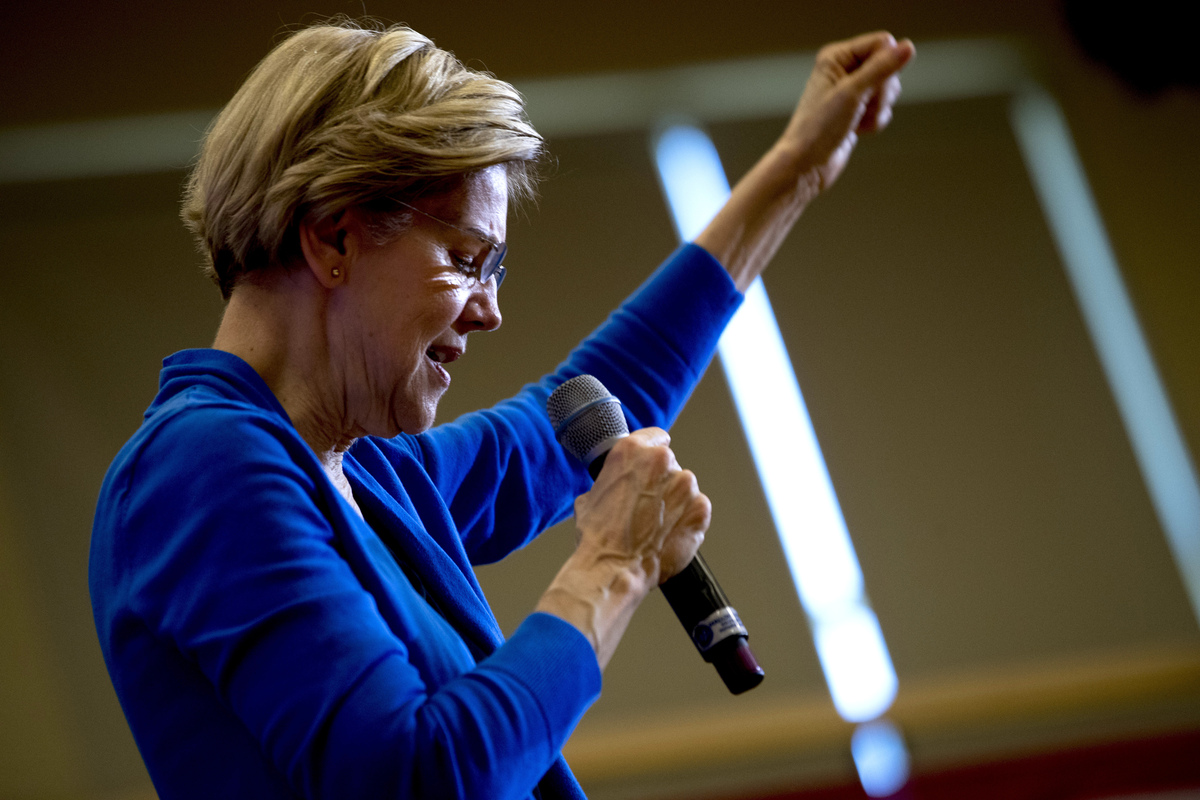 There was a point not long ago when Warren looked like she might have the nomination sealed up. And then "Medicare for All" tripped her up. Her lack of a plan didn't seem bold enough for the Sanders left, and her theme of "fighting" Republicans made some moderates nervous she couldn't win in a general election.

Warren really needs a win in New Hampshire, and that means either actually winning the primary or at least finishing ahead of Sanders. They're competing in the progressive lane, and if she again finishes behind Sanders, it's tough to see how Warren recovers. 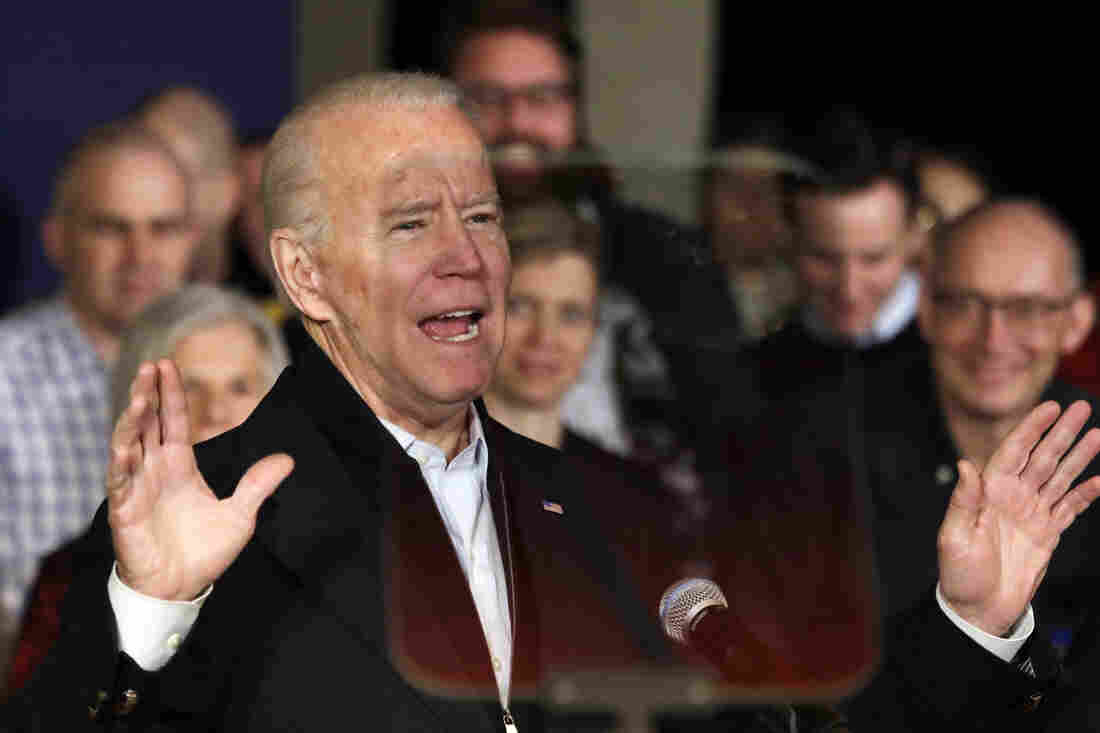 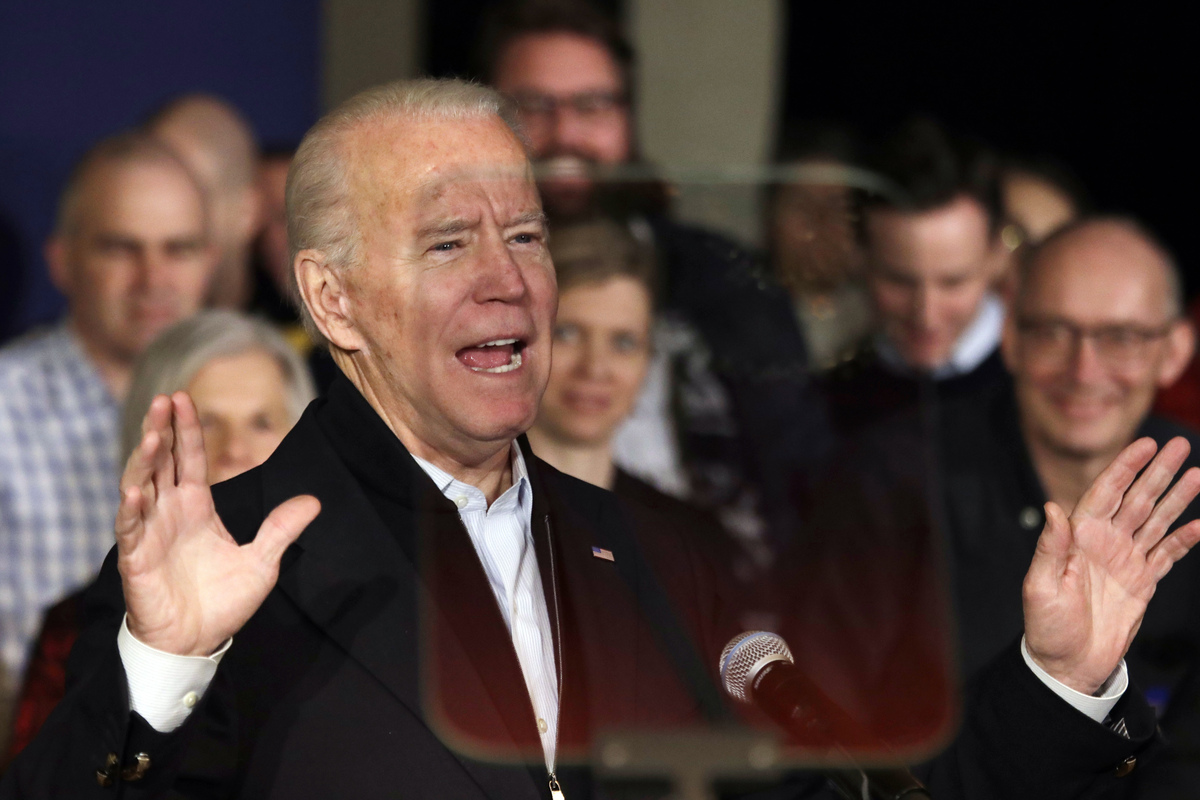 Sure, Iowa is not representative of the country. And, yes, a major part of Biden's base is African American voters and there aren't many in Iowa. But there's no excuse for finishing fourth. Biden himself called the result a "gut punch" Thursday in New Hampshire.

Entrance polls showed 56% of the caucusgoers identified as moderates. And Biden was at or near the top in Iowa polls coming in. But instead of the lion's share of the moderate vote going to Biden, it wound up being split between Buttigieg, Biden and Klobuchar, who finished only a few points behind the former vice president. What's more, Klobuchar outpaced her polling and was definitely on the upswing in the last weekend. She had big crowds and was on the tips of the tongues of lots of moderate voters in Iowa.

Biden has no one to blame but himself for the finish. Even people at Biden events, who thought they might end up with him, thought he seemed unsteady and that his message was muddled — and many went elsewhere.

Recognizing the threat Buttigieg and Sanders are to his nomination, Biden started going after their vulnerabilities head-on Thursday in New Hampshire. Biden called Buttigieg a "risk" and questioned his experience, stressing he's only been mayor of a city with a small population. And he said President Trump will use Sanders' identifying as a democratic socialist to go after every Democrat up and down the ballot as radical leftists.

Biden needs a stronger finish in New Hampshire to retain his strong support among black voters in South Carolina, which holds its contest Feb. 29. He can't afford to see his support with African Americans eroded and hope to be a strong nominee going into the convention. South Carolina is a must-win state for Biden, and he has to win it big.

Campaigns were expecting high turnout in Iowa, but it didn't happen — and that has to be worrying for Democrats.

It very well may be that undecided voters stayed home and are fine with whoever wins. But Democrats were hoping to show just how enthusiastic their base is to turn out and beat President Trump.

In this first contest, it didn't happen.

5. Sanders is in the pole position for the nomination but didn't help his electability argument.

The Sanders campaign points to polls showing that he beats Trump in a general election. And that's true.

Sanders has a massive base of support with voters under 30, but he didn't appear to expand beyond that. Sanders won the raw-vote total, but losing in rural areas cost him delegates. Sanders' votes came from urban areas and college towns. That's not where Democrats need to show strength.

So with moderates splitting the vote, and Sanders beating out Warren in Iowa, he looks stronger today for the nomination than he did before Iowa, but he didn't do much to help his argument that he's best to beat Trump.