Accessibility links
Review: 'The Regrets,' By Amy Bonaffons Amy Bonaffons deftly avoids the trap of saccharine sweetness in her new novel about a ghost serving out a 90-day sentence on Earth — and the woman he falls in love with.

Love Has A Ghost Of A Chance In 'The Regrets'

Love Has A Ghost Of A Chance In 'The Regrets' 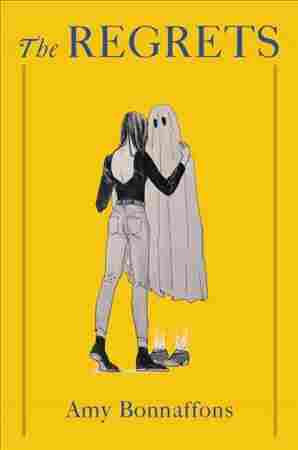 Rachel, a librarian in Brooklyn, hasn't had the best luck with men. "I'd dated inadvisably before," she admits, "the long-distance architect, the married whiskey distiller, the homeless freegan." But when she sees a beautiful young man lingering at her bus stop, she's hopeful he might be the one to reverse her string of bad luck. Thomas, it turns out, is her perfect match — or he would be, if only he weren't dead.

That's the setup for The Regrets, the dazzling debut novel from Georgia author Amy Bonnaffons. Wildly inventive and daring, her novel is a reflection on the limits of love that's both hilarious and heartbreaking.

The novel opens with Thomas encountering an angel after he and his best friend are killed in a motorcycle accident. It turns out he's met the angel before, as a child, when she visited him in the mistaken belief that he was about to die. Because of that meeting, a mysterious man in an otherworldly office tells Thomas that he's "insufficiently dead ... You lack rupture with your life. You have no exit narrative."

So he's forced to return to Earth for three months while his death is re-processed. He's warned not to seek "any form of self-medication (pharmaceutical, alcoholic, sexual, or otherwise)" or else he'll "incur regrets" — which the man in the office explains as "incursions of the past into the present. Threats to one's temporal integrity. An inability to coexist with oneself."

'Processed Cheese' Is Hard To Love — But Easy To Admire

'Creatures' Examines The Heartbreak Of Being Human

But when he sees Rachel, he's instantly infatuated: "The girl with the red lipstick, or the idea of the girl, was a bright vivid gash through my loneliness: the hideous loneliness of the dead, a loneliness I can only describe as both infinite and suffocating, like a loop of musty bandage, layer upon layer of it, tightening as it thickens, deadening as it pains." The two quickly fall for each other, and he eventually tells her about his condition after she notices a gaping, bloodless hole in his chest.

Nonetheless, the two continue their doomed relationship. Rachel can't abide the thought of losing Thomas, even though she knows she will: "Something had shifted in the color resolution of my life: there was this new brightness in it, and in contrast to that brightness everything else seemed dim and unimportant." As Thomas' scheduled time on earth races toward its end, he begins to disappear completely, becoming a ghost with no body at all. They do their best to sustain their connection, hoping in vain that love can overcome the finality of death.

There are a million ways that a novel about a woman engaged in a torrid sexual relationship with a ghost can go wrong, and not many ways it can go right. In the hands of another author, The Regrets could have become something like the movie Ghost as reimagined by Nicholas Sparks. But Bonnaffons resists sentimentality and treacly reflections on love — her novel is open-hearted, but never cloying or dewy-eyed.

In the hands of another author, 'The Regrets' could have become something like the movie 'Ghost' as reimagined by Nicholas Sparks. But Bonnaffons resists sentimentality and treacly reflections on love.

That's partly because she writes with a straight face, never indulging in whimsy and always taking her characters seriously. And the writing itself is flawless — it can be difficult to pull off a love story, especially when one of the lovers is a ghost, but Bonnaffons does so with confidence and real insight into what it means to be totally infatuated with another person: "We might as well have been the first man and the first woman: risking everything, learning the limits of the body, figuring everything out from scratch."

While The Regrets is, for obvious reasons, frequently heartbreaking, Bonnaffons also proves to be quite funny, and the humor in the novel keeps it from becoming unbearably sad. "The whole reason heterosexual men need women, besides heterosexual intercourse, is that they need someone to verbalize the world to," Rachel reflects at one point. "Or rather, in whose general direction to verbalize the world. It's like the way cats need a doorstep on which to deposit dead birds." Or when she describes a friend's disastrous attempt at cooking: "Like many things Samira did, it was a generous impulse whose execution was hampered by basic, easy predictable facts about reality."

The Regrets is a miracle of a love story, a brilliant novel that asks perceptive questions about the line between love and (literal) possession, about what we're willing to do for love, and what it feels like to be "photographic negative of a person, an absence given form, a loose ache of consciousness attached to a cheap facsimile of a body."