Accessibility links
How Trump's Impeachment Unfolded, In The Words Of Those Who Administered It Throughout the impeachment process, NPR interviewed dozens of lawmakers who sat in on the hearings, testimony, defense and votes. Read the key moments in their own words. 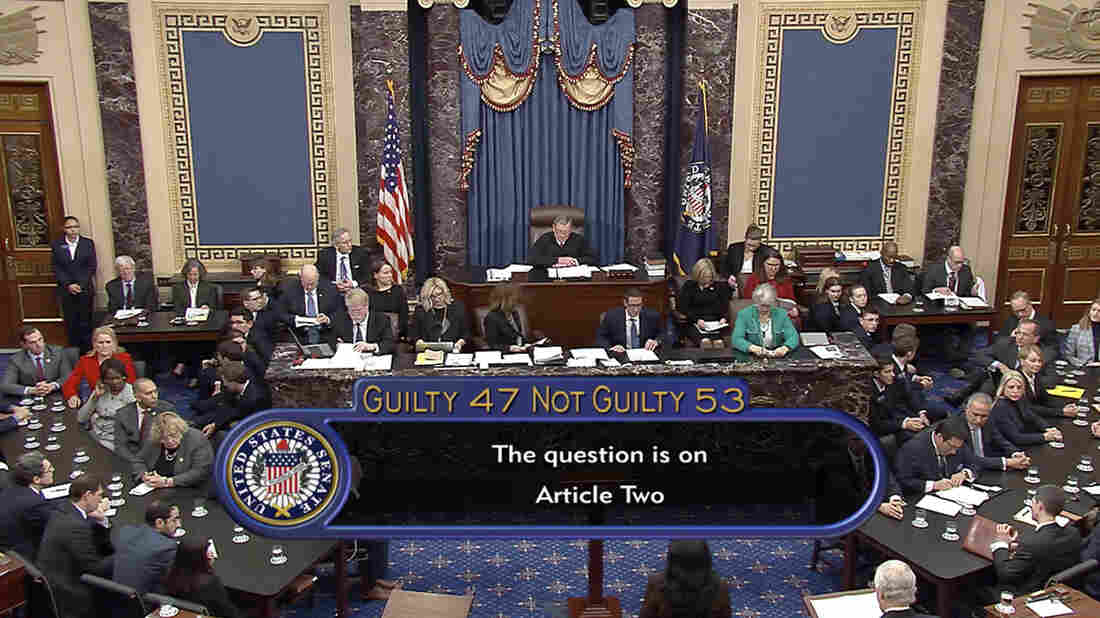 The Senate votes on whether to impeach President Trump on Feb. 5, 2020. Senate Television via AP hide caption 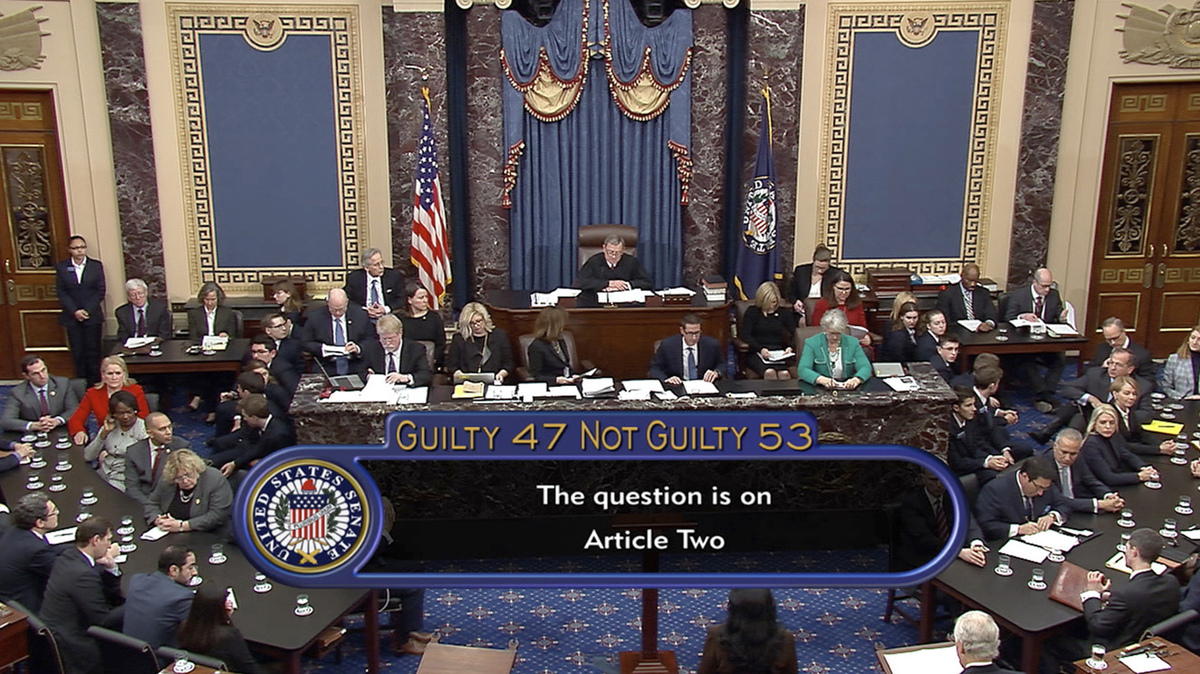 The Senate votes on whether to impeach President Trump on Feb. 5, 2020.

The impeachment of President Donald J. Trump began in September with the launch of a House inquiry that evolved into a Senate trial. It ended Wednesday with Senators voting to acquit the president on two articles of impeachment — abuse of power and obstruction of justice.

Along the way, NPR talked to dozens of members of Congress who had front row seats to the hearings, testimony, defense and votes. Here are key moments from lawmakers interviewed by NPR.

For our full coverage of the Trump impeachment process, read our stories here or listen here.

Jim Jordan (R-Ohio), the top Republican on the House Oversight Committee, on the whistleblower complaint and alleged quid pro quo at the center of the impeachment inquiry (All Things Considered on Sept. 26, 2019)

"When you read the transcript, there is nothing there. Even the Democrat chairman have indicated ... that there was no quid pro quo. The president doesn't talk about any foreign aid. Even the president of Ukraine, Mr. [Volodymyr] Zelenskiy, has said he was not pushed in any way. But the Democrats have been trying to go after this president since before he was even elected. It's been nonstop. And they don't care about the facts and the truth; they're going to do whatever it takes to try to get this president. It's unfortunate because it's not good for the country."

"I don't think any decision has been made on the ultimate question about whether articles of impeachment should be brought, but on the basis of what the witnesses have had to say so far, there are any number of potentially impeachable offenses, including bribery, including high crimes and misdemeanors."

Mike Johnson (R-La.) of the House Judiciary Committee on the GOP's view of the impeachment hearings (Morning Edition, Nov. 22, 2019)

"Here's what we've had ... in quick summary: two weeks now of open hearings, 12 witnesses and no bombshell. There's been no testimony affirming bribery or extortion. There's been a whole lot of readily admitted presumption and assumption and opinion. And it's all about a phone call with a transcript that every single American can read for themselves."

Schiff on Trump's legal strategy and refusal to allow witnesses to testify and to provide documents (All Things Considered on Dec. 3, 2019 and Morning Edition on Dec. 4, 2019)

"The strategy ultimately has not worked because we were able to move ahead. We're able to build a case without the documents from all of these agencies, through several very courageous public servants who stepped forward in defiance of the president's orders and testified. We were able to build an overwhelming case of his misconduct and, equally, make a case that this president has obstructed Congress in a way and to a degree that President Nixon never did. If there was ever a case to be built for obstruction of Congress, this is it."

Rep. Doug Collins (R-Ga.), the top Republican on the House Judiciary Committee, on whether the president exercised good moral character in his leadership (All Things Considered, Dec. 5, 2019 and Morning Edition, Dec. 6, 2019)

"We Senate Democrats believe that the trial has to be fair, and it's important that the American people judge it to be fair. And so there is lots of evidence that the House presented, but these four witnesses have direct knowledge of why the aid to Ukraine was delayed. There is no reason not to have them. I haven't heard of a single good reason not to have them other than people are afraid of what they might say."

"In the full context of the whole record, which you're going to see put on display when the president's trial attorneys take their turn, he was concerned about the large picture overall. Of course the Bidens were part of that. And this was not something relegated to the Trump administration. The Obama administration had some alarm and concerns about that too, various departments."

Sen. Angus King (I-Maine) on how the Bolton revelations might affect the trial (All Things Considered on Jan. 27, 2020)

"I think I'm already hearing a number of Republicans who are moving toward voting to at least hear from John Bolton, if not other witnesses. ... If there's some indication that he has information that bears directly on the heart of the case, to willfully say, we don't want to hear that, to me, basically just undermines the idea that this is a real trial ... I think there will be more than four [Republicans needed to cross the aisle]. My bold prediction is there will be five or 10."

Sen. Lamar Alexander (R-Tenn.) on whether Trump did anything inappropriate (Special Coverage on Jan. 31, 2020)

"I agree he did something inappropriate, but I don't agree he did anything akin to treason, bribery, high crimes and misdemeanors. I think there's a big gap there. As [Trump's attorney] Professor [Alan] Dershowitz pointed out, 40 presidents have been accused of abuse of power since Washington. So, many presidents have done inappropriate things. I think it's appropriate for me as a United States senator to say, 'Mr. President, you shouldn't do that.' But that doesn't mean that I should take it upon myself to vote, to remove him from office and take him off the ballot. I think that's up to the people."

Johnson on the consequences of calling for impeachment, following the Senate vote to acquit Trump (All Things Considered on Feb. 5, 2020)

"I think there are people on both sides who will now look to impeach every president going forward the first time they make a phone call that's unpopular or a policy decision that people disagree with. That's not what the impeachment clause was designed to do. And now the bar has been placed so low that I really do fear for the future."

Schiff, who acted as the lead impeachment manager for Democrats, on whether the months-long impeachment process was worth it (Morning Edition on Feb. 6, 2020)

"It was absolutely worth it. And we felt very strongly and I think history will bear us out on this, that we needed to place a constraint on this president who was acting unethically, who was sacrificing our national security, who was jeopardizing the integrity of our elections. And whatever the result was going to be in the Senate, we couldn't sit still. We had a constitutional obligation to make the case."