Accessibility links
Amid Lebanon's Economic Crisis, The Country's Health Care System Is Ailing "We are collecting from every person of goodwill," says a Roman Catholic priest who started a low-cost clinic. "We are not expecting a miracle. We hope to create a place where people feel respected." 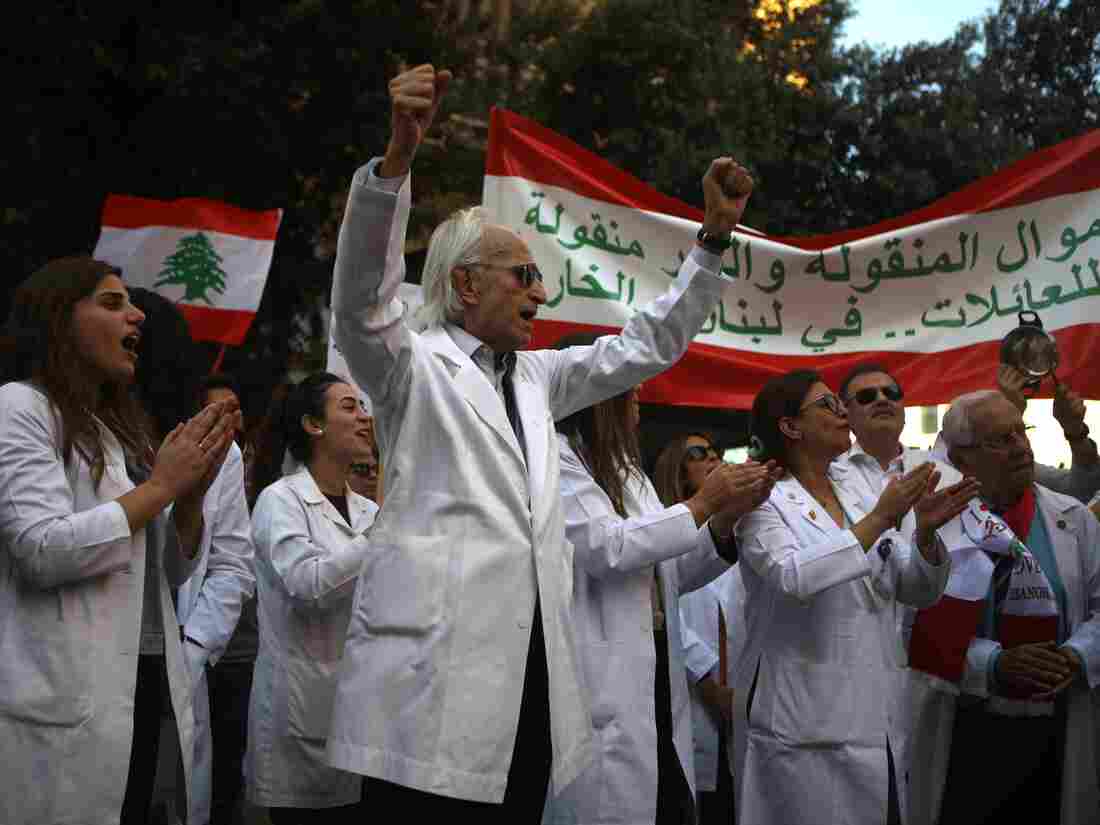 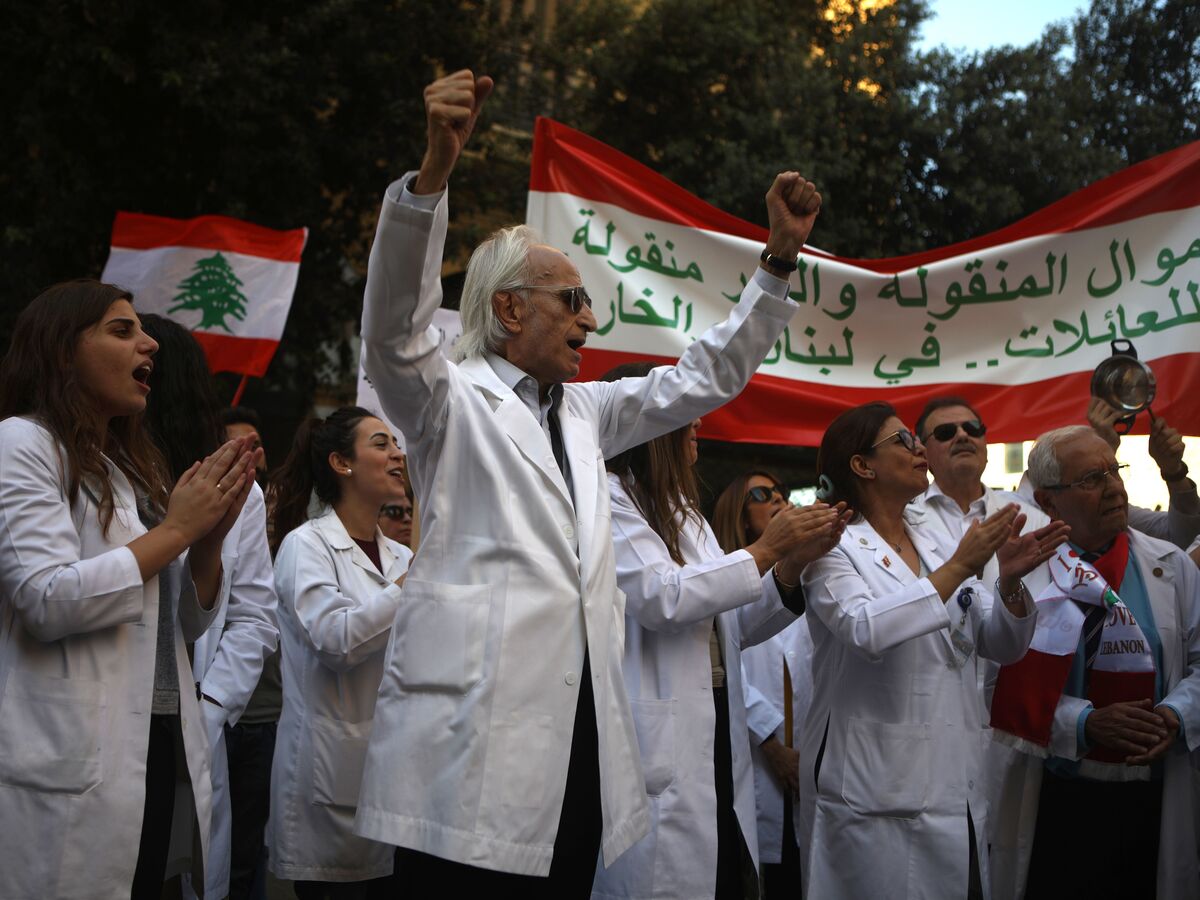 Like many Lebanese, Jesuit priest Gabriel Khairallah has been on the front lines of anti-government protests for more than three months.

"I mean, what am I doing on the front? I am against corruption and seeking social justice, and the same for the doctors," he says.

He's done much more than protest on the streets — in recent weeks, he also opened a low-cost medical clinic in the annex of Beirut's St. Joseph Church.

In Khairallah's clinic, which is run mostly by volunteers, the cost of a visit is about $5 and is waived for those who can't afford it. More than 30 doctors serve on a rotating basis, providing specialized care in cardiology, pediatrics, gynecology and orthopedics. Khairallah also corralled pharmacies to donate certain medicines.

"We are collecting from every person of goodwill," says Khairallah. "We are not expecting a miracle. We hope to create a place where people feel respected."

The need for such a clinic arose as Lebanon's economic woes sparked spontaneous mass protests last October. A million people took to the streets.

Initially, anger surged over a new tax on Internet voice-call services, and expanded to demand the ouster of the government. The protests, peaceful for months, grew more violent in December, as riot police used water cannons, tear gas and rubber bullets to stop thousands from demonstrating in front of the parliament building. 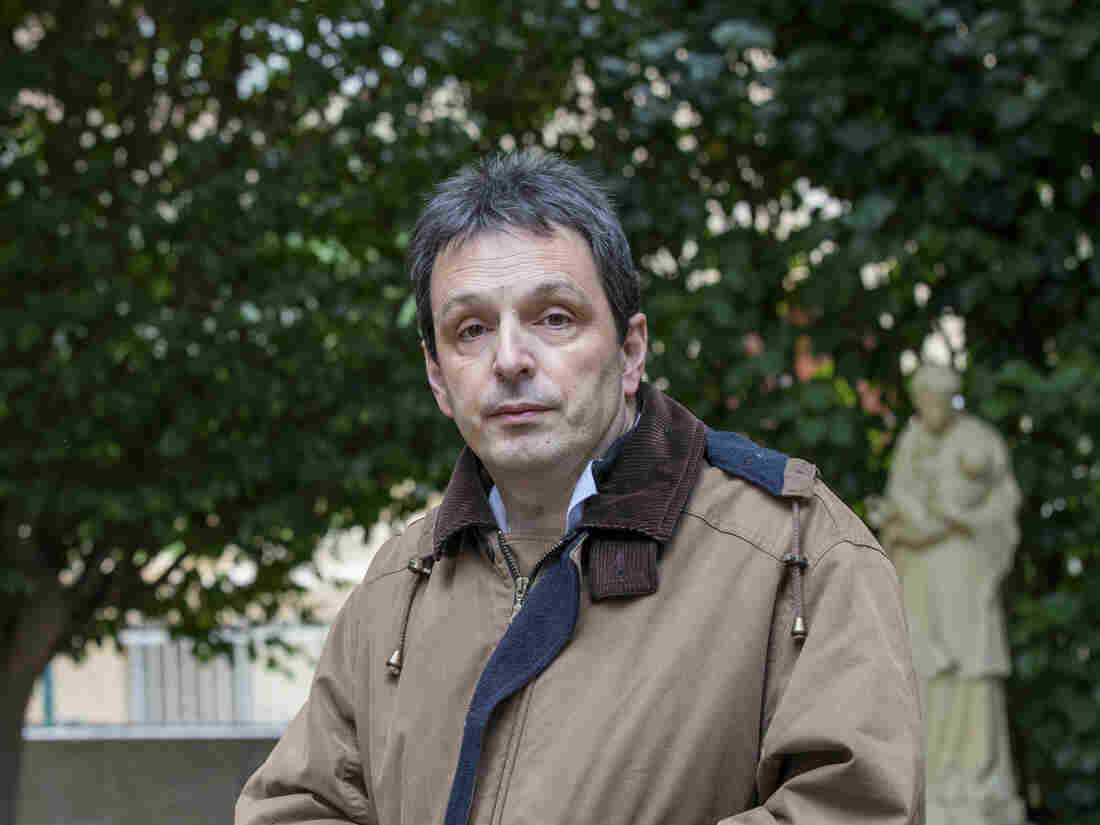 "We are not expecting a miracle. We hope to create a place where people feel respected," says Jesuit priest Gabriel Khairallah, who recently started a low-cost medical clinic staffed by volunteer doctors. Lama Al-Arian/NPR hide caption 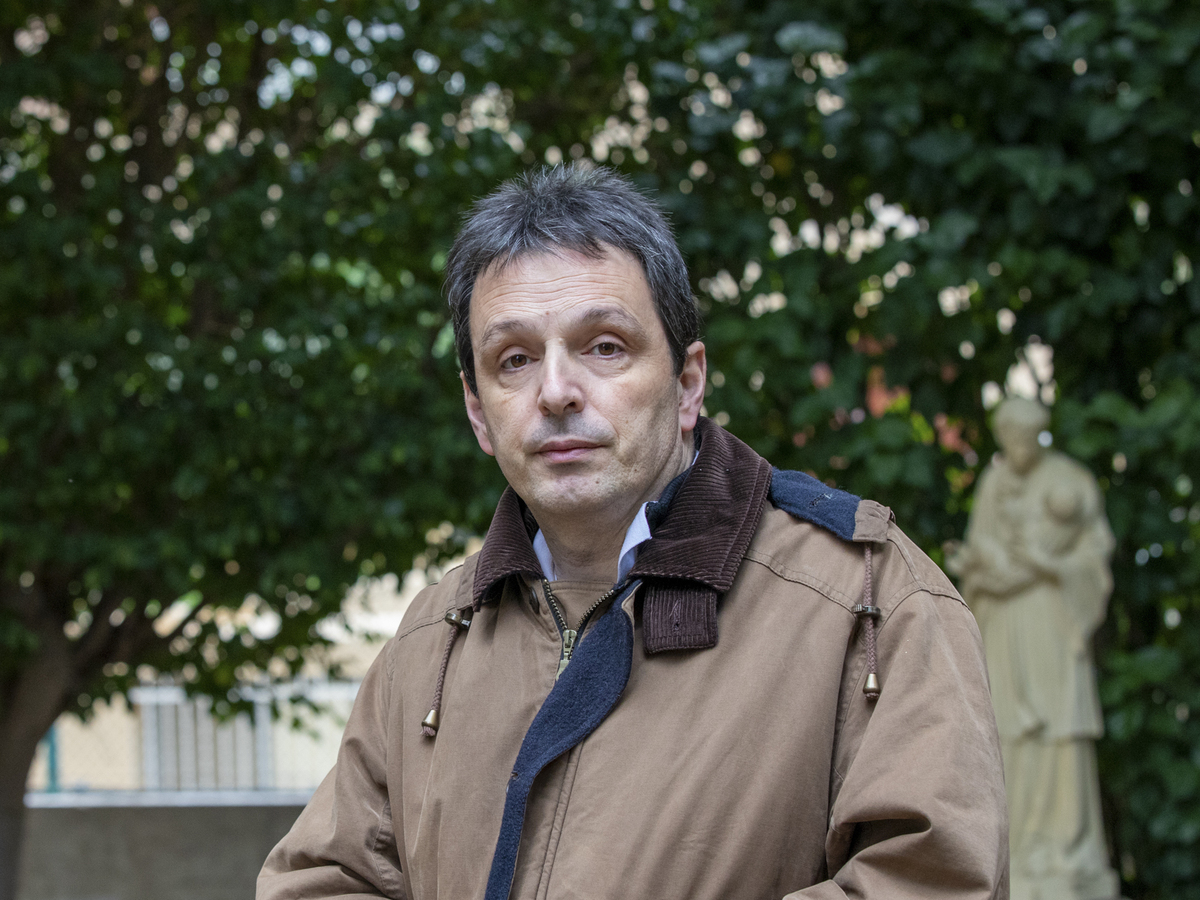 "We are not expecting a miracle. We hope to create a place where people feel respected," says Jesuit priest Gabriel Khairallah, who recently started a low-cost medical clinic staffed by volunteer doctors.

Lebanon is one of the most indebted nations in the world. For decades, the central bank serviced debt by offering high interest rates to attract capital.

"But it reached a point that people began to realize it's not sustainable and the government is just accumulating more debt and the banks are further away from solvency," says Paul Salem, president of the Middle East Institute in Washington, D.C.

Over the past 18 months, with a decline in oil prices, remittances from Lebanese working in the Gulf also have shrunk. "It's causing a reverse sucking motion," Salem says, "with people not sending money and trying to pull their money out."

Lebanon's worsening economic crisis has had dire consequences for the country's medical care. Doctors have staged sit-ins at hospitals to warn of shortages of lifesaving medicines and supplies, which can no longer be obtained from international suppliers due to a shortage of U.S. dollars. 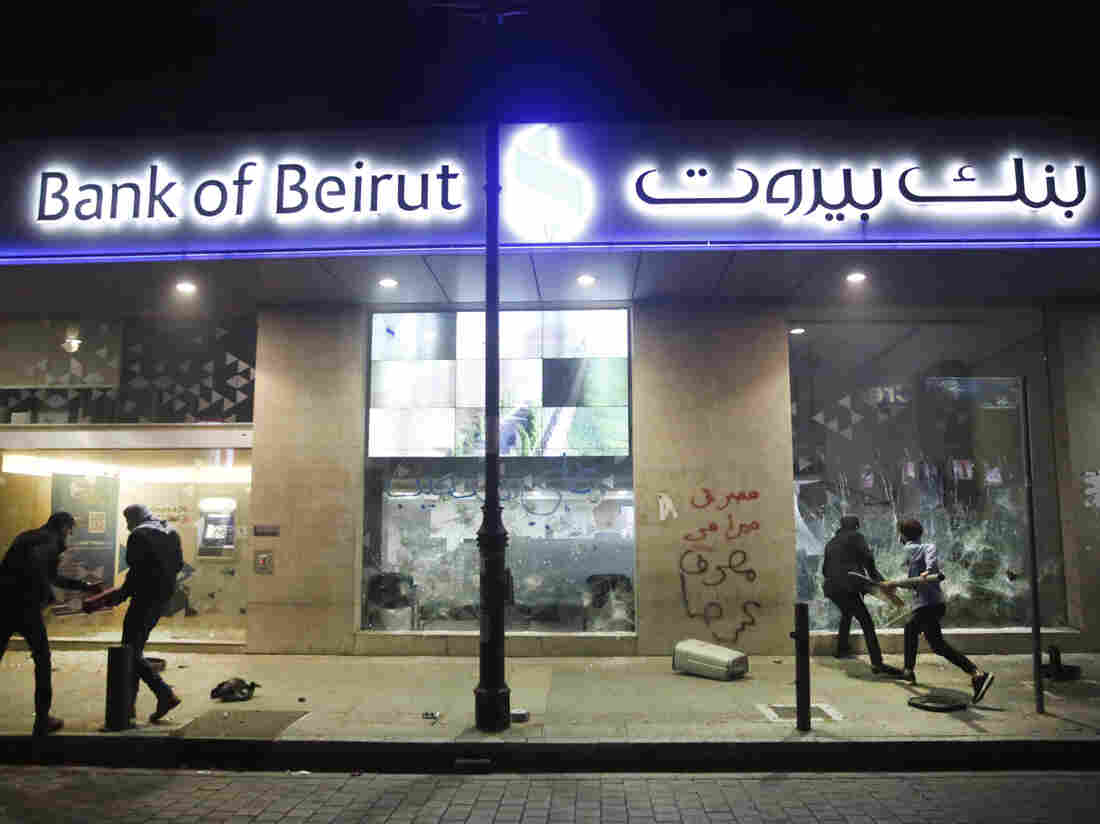 Anti-government protesters smash a bank windows during protests against a deepening financial crisis in Beirut in January.

Patients began skipping doctor visits, vaccinations and prescriptions because they could no longer afford them, as insurance policies lapsed amid widespread unemployment.

"More and more people are not able to pay the fees, doctor fees," Khairallah says.

As the protest movement gained strength in October, Lebanese banks closed for two weeks. When the banks reopened, they restricted lines of credit and the central bank began to limit U.S. dollar withdrawals.

The first to suffer were businesses requiring hard currency, including medical suppliers, which could only access 50% of the dollars needed to purchase goods. 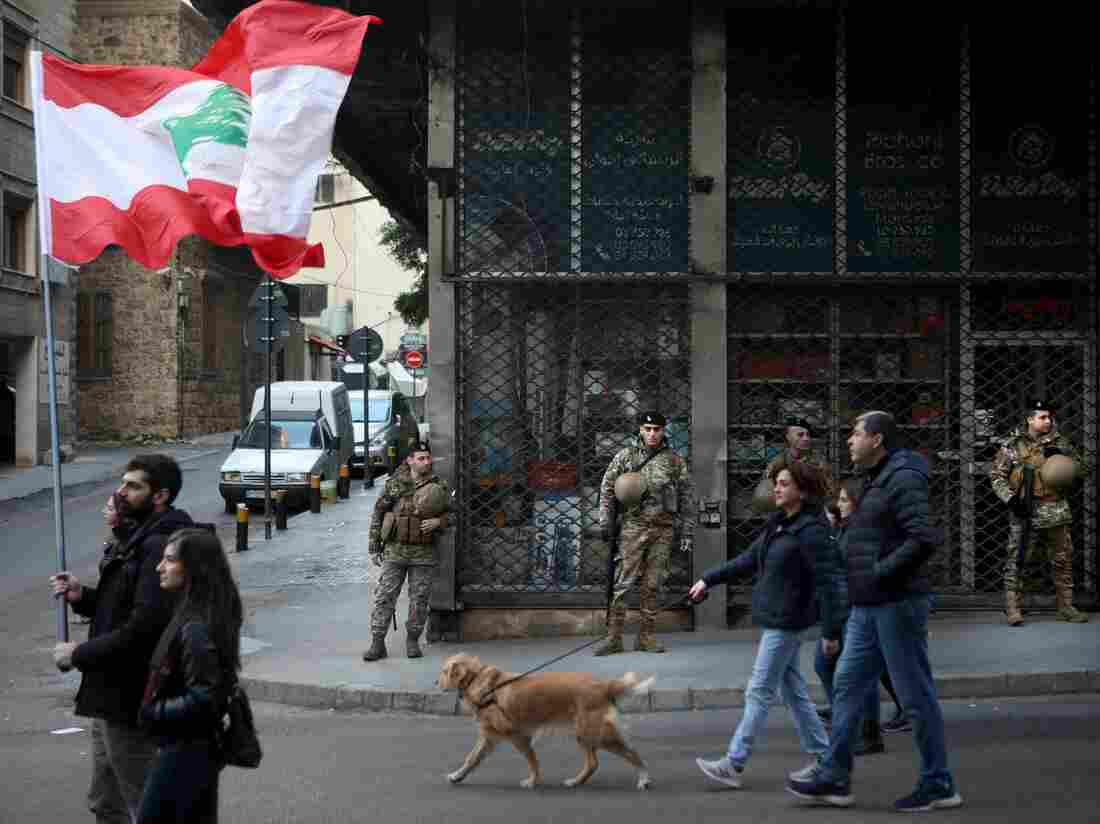 Army soldiers look on as Lebanese anti-government protesters march in Beirut in January.

The Lebanese government also failed to reimburse private and public hospitals for medical care to patients covered by social security and military health accounts, according to Human Rights Watch.

"The world is collapsing on top of everyone"

Khairallah's new clinic has quickly become a lifeline for patients, who crowd into a small waiting room.

"I was in the middle class before," says a middle-aged woman who would not give her name, chagrined by showing up at a free clinic. She had been forgoing medical appointments until this clinic opened.

She recently lost her job at a university. Now she struggles. She curses Lebanon's political elite for "stealing the country."

"People who have money can't withdraw it. The world is collapsing on top of everyone," she says, referring to currency controls that limit Lebanese bank withdrawals. ATMs no longer dispense dollars and depositors must wait in long lines to withdraw small sums each week.

On Jan. 25, the 100th day of anti-government protests, Khairallah was back on the streets, weaving his way through thousands of people waving Lebanese flags and chanting slogans against the government, "to show the power that we are here and we are not afraid."

He was joined by Dr. Mouin Jammal, an internal medicine specialist, the head doctor for Khairallah's new clinic.

"We still have to make more pressure, that's why we are here," says Jammal. He wants the central bank to raise the dollar limits for medical supplies before hospitals run out.

"We will not wait until it's really empty," he says about the dwindling hospital stocks. "This is why we are making pressure, to avoid the crisis."

The fix for Lebanon's health care crisis will require reforming the country's bloated and inefficient bureaucracy, say doctors who have worked in Lebanon's system for years.

"The Ministry of Health is a corrupt ministry, completely," says Dr. Karam Karam, a clinical professor of medicine at the American University of Beirut who served as health minister in the 1990s. While in office, Karam says he introduced a transparent bidding process to combat bribery on purchases of medicine and medical supplies from abroad.

"We saved almost $50 million," he says, in just one year, and cut kickbacks by the same amount. "Do you think anyone says thank you?"

Since then, corruption in the health ministry has escalated, says Dr. Ismail Sukkarieh, a gastroenterologist and member of parliament in the 1990s.

There are already critical shortages of medicine. Hospitals have stopped performing nonessential surgeries and closed entire wings for lack of patients.

Economist Nisreen Salti, an associate professor at the American University of Beirut who studies the health sector, believes it is unlikely there will be a complete breakdown in the health care system, but believes the availability of expensive and critical life-saving medicines, including cancer drugs, will decline — "except to the privileged, a shrinking pool of people covered by what is available."

Lebanon was once proud of its health care sector, despite the corruption, but things are different now, she says.

"Even if these acts of cleaning up take place, we always revert back to a state where things lack transparency again and drug prices seem to be artificially high," Salti says.

She warns the Lebanese will be less healthy because of rising unemployment and diminished resources for housing and food, which are linked with health.

"I fear that the deep erosion is one that is difficult to recover from and to correct," she says.

"We cannot rely on donors"

Dr. Elie Saliba, a pediatric orthopedic surgeon, also worries about long-term erosion as he gives a visitor a tour of a special center for children with cerebral palsy in the sprawling Hospital of Bhannes Hospitality Center for Charity Sisters compound in Bikfaya, an hour's drive from Beirut.

Saliba splits his practice. At night, he provides free medical care for anti-government protesters injured by security police, and by day, he sees his usual patients and is on call at the children's center.

There are 80 children in a space filled with brightly colored exercise equipment for daily therapies, and classrooms that accommodate child-sized wheelchairs. The cost for residential care is more than $1,000 per month, he says.

The government has paid $400 of that amount for each patient, he says, but no longer does, due to the economic crisis. The rest of the the center's budget comes from private donors, he says, "but we cannot rely on donors in this period."

Many of the richest Lebanese, the facility's traditional benefactors, have left the country and no longer make charitable donations. And those of more modest means now have even less to give.

The upshot, Saliba says: "We may close at the end of the year."