Accessibility links
Connecticut School Board Reinstates Mascot Native Americans Called Demeaning The Killingly, Conn., school district changed a mascot from the Redmen to the Red Hawks last year at the recommendation of local Native Americans. This year, new board members reversed that decision. 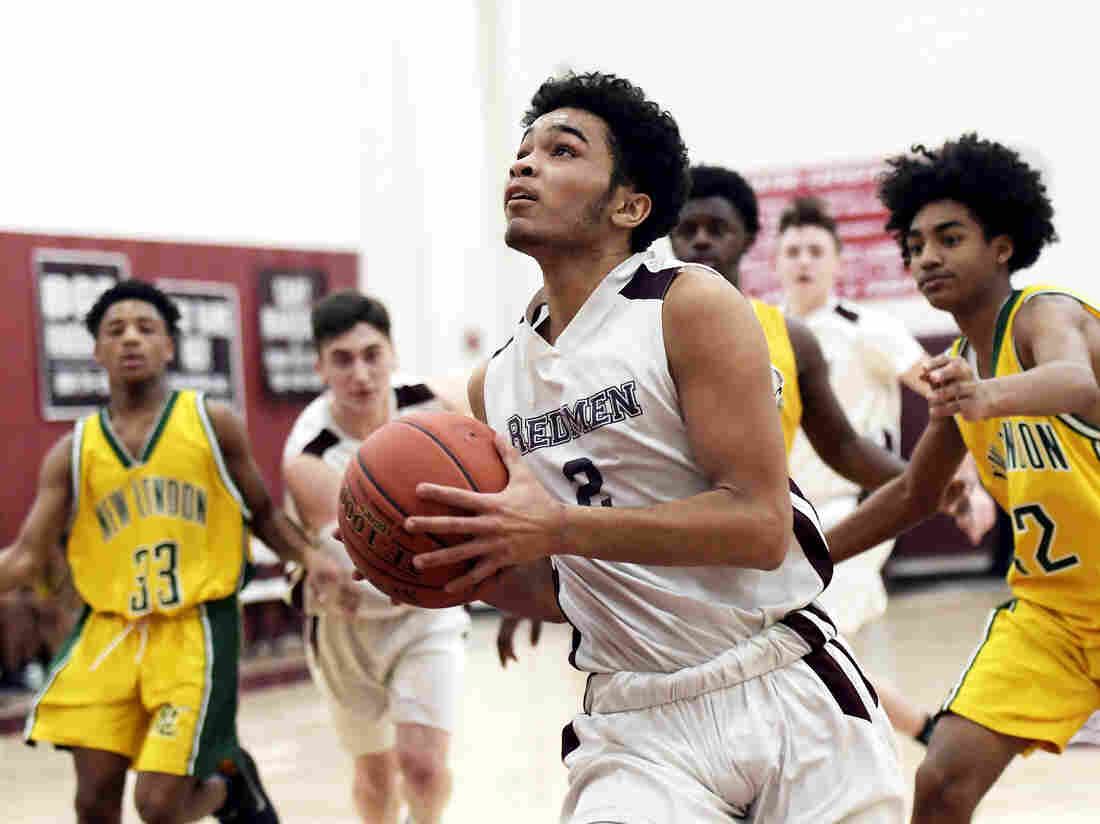 Sam Deronsle drives to the basket during a basketball game at Killingly High School on Jan. 14. Deronsle is wearing a Redmen jersey after school board members voted to reinstate the mascot. Joe Amon/Connecticut Public Radio hide caption 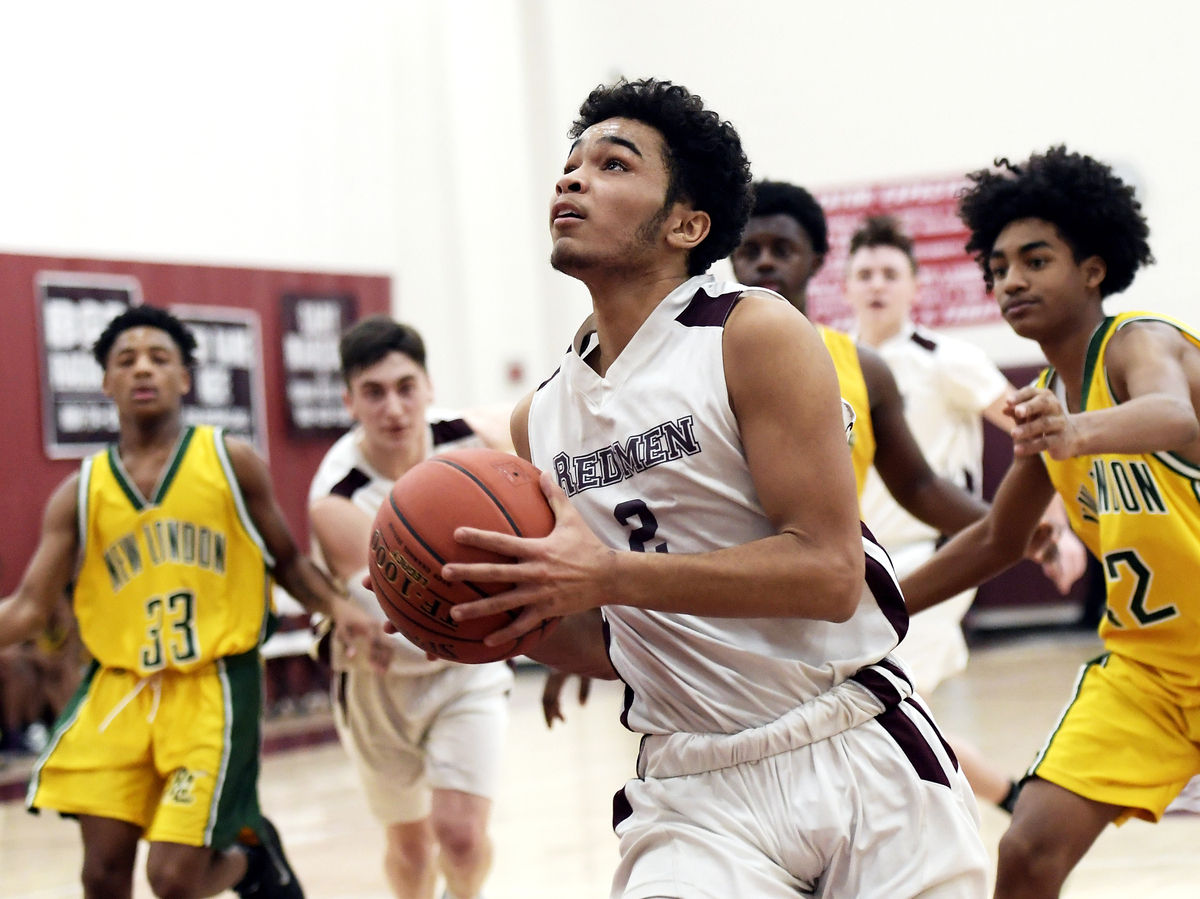 Sam Deronsle drives to the basket during a basketball game at Killingly High School on Jan. 14. Deronsle is wearing a Redmen jersey after school board members voted to reinstate the mascot.

The high school sports teams in Killingly, Conn., are the Redmen again.

That name – and "Redgals," the nickname for the school's girls' teams — was replaced last year at the urging of students and local Native Americans.

But now, at a time when many American schools are moving away from Native American mascots, Killingly is choosing a different direction.

"I'm even, like, embarrassed that I have Redmen on my gym floor right now," said sophomore Jessica Long, referencing a big school decal stuck to the hardwood of Killingly High School. "It's embarrassing to be connected to a school that, even though they did the right thing before, they went back to the wrong thing."

Killingly's school board voted last summer to replace Redmen on the recommendation of the Nipmuc Nation, a tribe indigenous to central Massachusetts, northeastern Connecticut and northwestern Rhode Island. The student body then chose a new name in the fall. It wanted to be called the Red Hawks.

But this year, the board had new members, and they wanted Redmen restored. They reversed the decision on Jan. 8.

Norm Ferron was one of five board members to vote yes in a 5-4 decision. He was so frustrated over the previous decision to get rid of the mascot that he ran for a school board seat last fall.

Pennsylvania School District Could Be Forced To Ax Controversial Mascot

Pennsylvania School District Could Be Forced To Ax Controversial Mascot

"I felt like the whole thing was rushed and a lot of misinformation was put out and a lot of emotional knee-jerk reactions were looked at instead of basically looking at the facts," Ferron said.

But the Nipmuc Nation doesn't agree. The tribe told the board back in July that any logo or nickname intended to depict Native Americans is offensive.

That statement from the Nipmuc Nation is what prompted the mascot change in the first place.

The move was consistent with how schools were acting across the U.S. — high schools such as Menomonee Falls in Wisconsin and Teton High School in Idaho, which shed Native American mascot names.

Barbi Gardiner, who graduated from Killingly High almost 30 years ago, has been outspoken about the need to ditch the mascot. She's a member of the Chaubunagungamaug band of Nipmuck Indians. 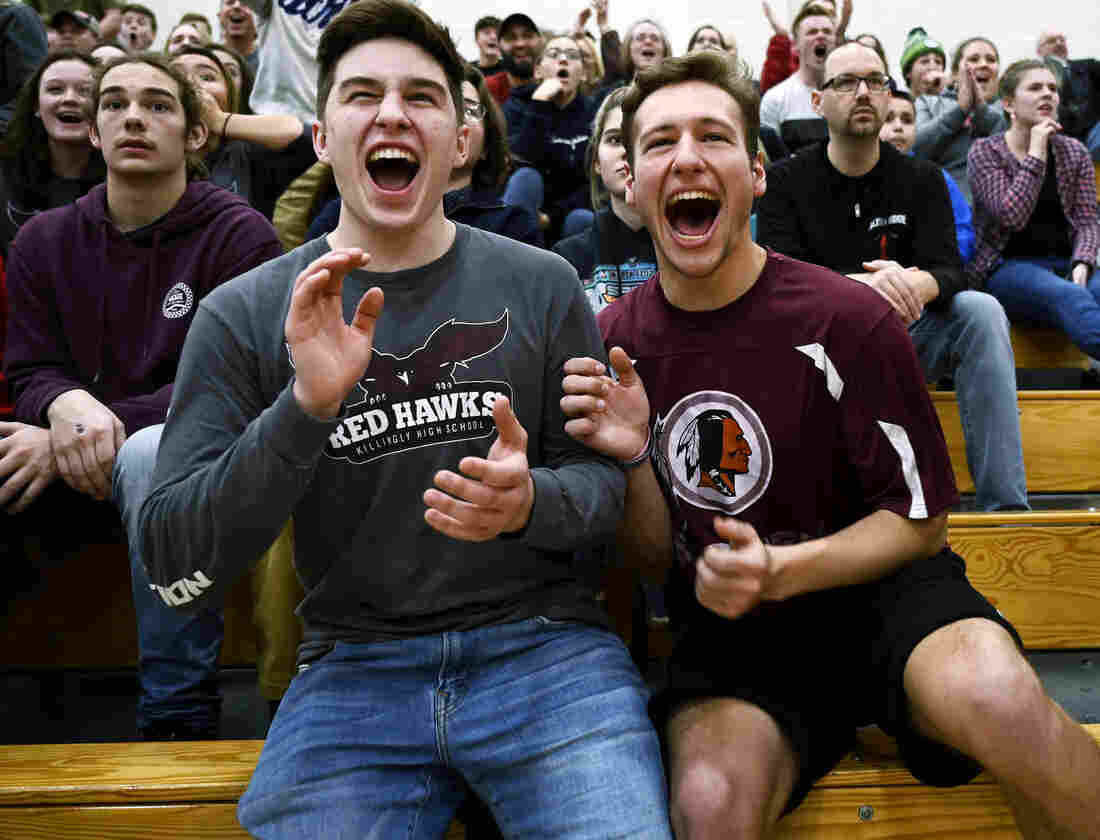 Senior Jacob Gilman, 18, wears a Red Hawks shirt while his friend, 18-year-old Josh Monty, wears a Redmen shirt during a Killingly High varsity basketball game on Jan. 11. Gilman says he wore the shirt mostly because he got it for free. Joe Amon/Connecticut Public Radio hide caption 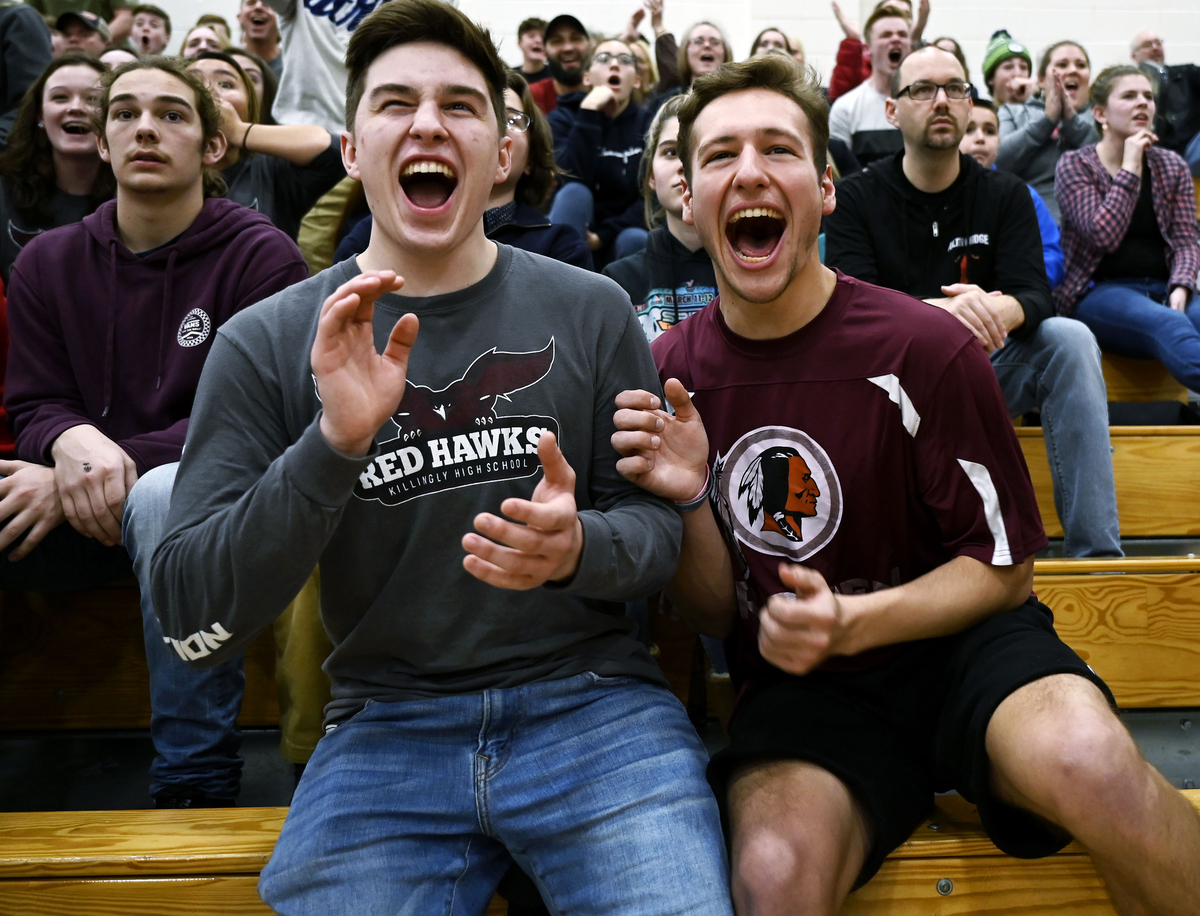 Senior Jacob Gilman, 18, wears a Red Hawks shirt while his friend, 18-year-old Josh Monty, wears a Redmen shirt during a Killingly High varsity basketball game on Jan. 11. Gilman says he wore the shirt mostly because he got it for free.

"You can't honor someone who just doesn't feel honored by that," Gardiner said. "Naming a team a skin color in 2020 is just ridiculous really."

Even though many students agree with Gardiner's position, Killingly High School senior Justin Maiato said he's not one of them.

"I think it should stay as the Redmen because, since I was born, this place has been the Redmen — it's been a Redmen family and it shouldn't change," Maiato said.

Now that Redmen is back, Jessica Long, 15, worries she'll be forced to wear something with that name on it in the spring. She plays tennis. She has Redgals sweatshirts from last year that she won't wear.

"I'm embarrassed to wear them outside of my house to school or anything like that because I don't want to represent that," Long said.

Long said she's writing a letter to state lawmakers to urge them to ban Native American mascots, something Maine did last May. The speaker of Connecticut's House of Representatives said Wednesday that a proposal to enact a ban will soon be up for debate.