Accessibility links
An Art Critic Was Mocking A $20,000 Work She Didn't Like — Then It Shattered The sculpture by Mexican artist Gabriel Rico included a large pane of glass with objects suspended within. How it suddenly broke into pieces on Saturday is a matter of fervent disagreement. 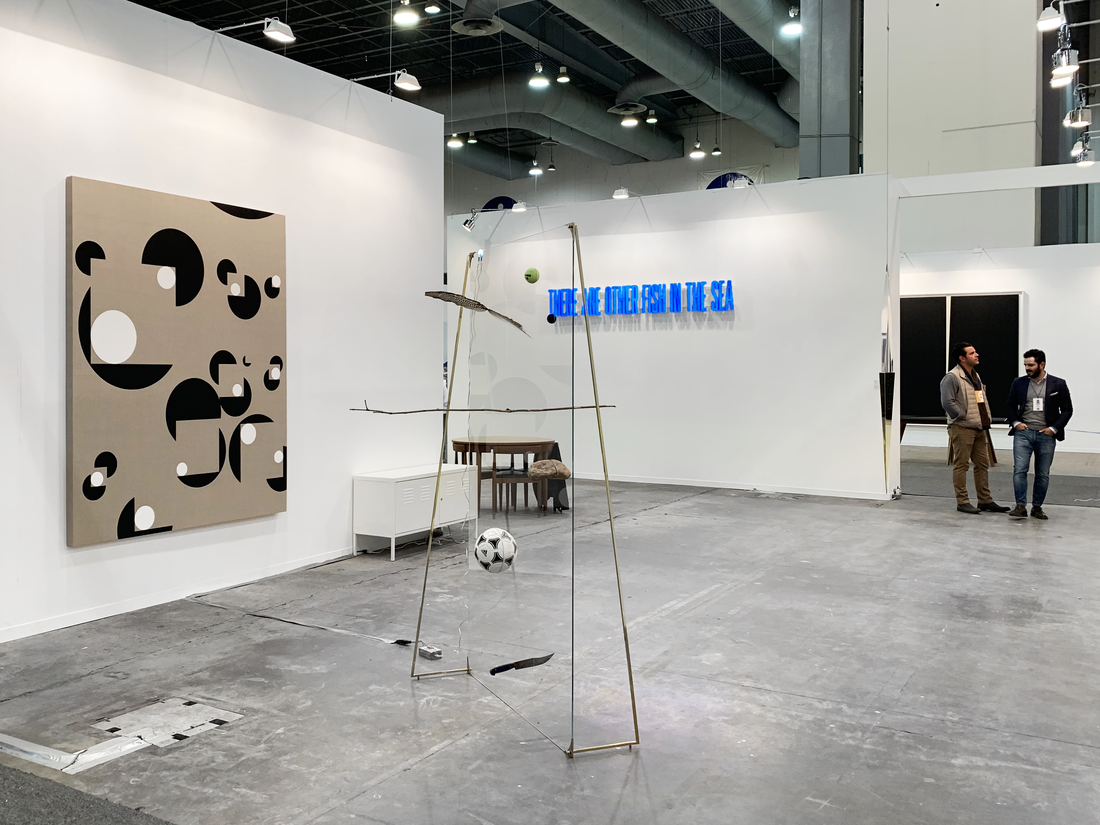 Gabriel Rico's Nimble and sinister tricks (To be preserved with out scandal and corruption) I, 2018. The work is made of glass, brass and different objects. OMR hide caption Gabriel Rico's Nimble and sinister tricks (To be preserved with out scandal and corruption) I, 2018. The work is made of glass, brass and different objects.

When a work of art is broken, is it destroyed — or transformed?

That's perhaps a generous question that one art critic is posing after a dramatic incident Saturday at the Zona Maco contemporary art fair in Mexico City.

One of the works on display was a large sculpture by Mexican artist Gabriel Rico. The piece involved a large sheet of glass with objects suspended through it, including a soccer ball, a tennis ball, a stick, a feather and a rock.

Rico, who is based in Guadalajara, Mexico, "creates pieces that fragment the composition of the contemporary human and evidence the geometric imperfection in nature. ... Rico's sculptural works reflect on the nature of the materials used to produce them and their arrangement in the final composition," according to a preview of the exhibit from his gallery.

An art critic named Avelina Lésper was at the fair, and she was decidedly unimpressed with the piece. As a critical commentary, she says, she set an empty can of Coca-Cola on the floor next to the work to convey that the meaning of the art would remain the same if the can were incorporated.

What happened next is in dispute.

The gallery OMR, which represents Rico, says Lésper got "too close to the work to put a can of soda on it and take a picture," in order to make a statement — and the piece shattered.

But Lésper told the newspaper Milenio that as she moved the can near the artwork, it shattered suddenly, "as if the pieces had heard my commentary." It could have happened to anyone, she says, including a collector or museum.

The artist Pavel Égüez says that he was with Lésper at the time and that her account is accurate — that the glass was too thin and exploded suddenly.

Lésper is reportedly well-known for her antipathy for contemporary art. But she says she's sorry about what happened to the work. "I didn't do it intentionally. I didn't destroy it. I didn't hurt it. I didn't touch it."

Following the collapse, Lésper met with someone from the gallery and offered to replace the glass. The gallerist then informed her that Rico's piece is worth $20,000.

Rico expressed sadness at the turn of events. "I am sad because this was very disrespectful for the pieces," he said in a statement. "This is a regrettable situation." 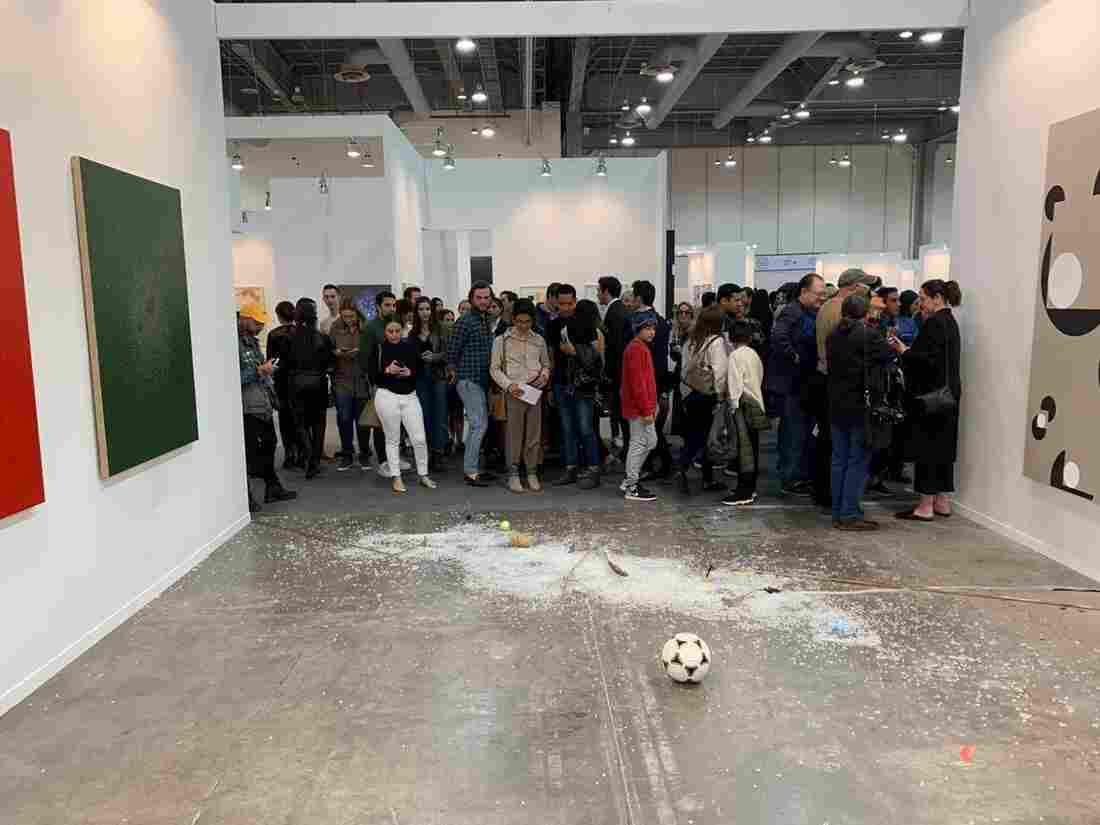 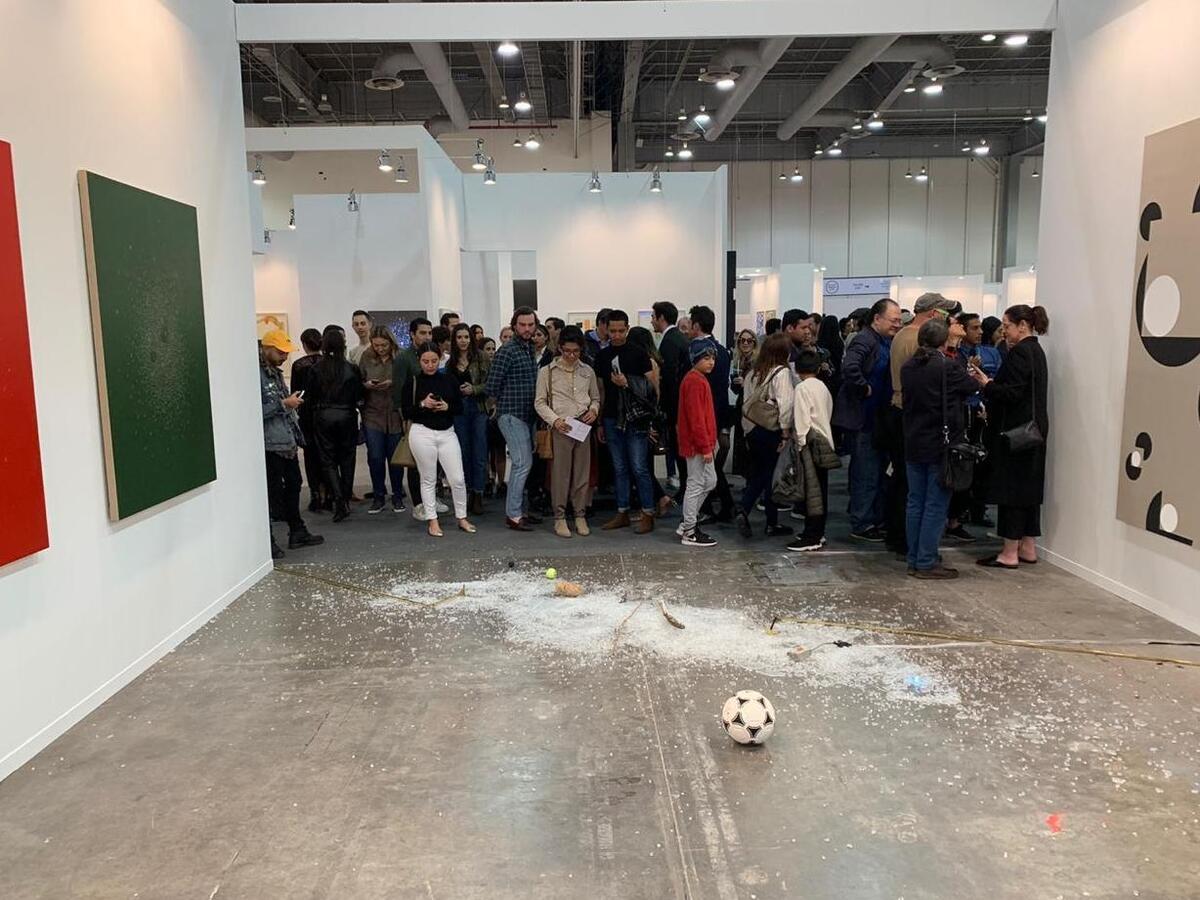 The piece shattered on Saturday.

OMR says the incident "seems to have been accidental and it's irrelevant how it happened." Nonetheless, the gallery told NPR in an email, the critic's action "shows a great lack of respect and professionalism on the part of Ms. Lésper, who as a member of the art community should be a better example to visitors on the etiquette of attending an art event and the respect of art objects. Never should a visitor to an art event touch or make an intervention in a work of art, subjecting it to possible damage."

"We do not understand how an alleged professional art critic destroyed a work by one of the most outstanding artists of the moment," it said.

In the video in which she defends herself, Lésper suggests an idea for the shattered piece: Leave it that way.

She points to a work by the surrealist Marcel Duchamp, The Bride Stripped Bare by Her Bachelors, Even (The Large Glass), which also features large panes of glass. Duchamp worked at the piece for years, before declaring the work "definitively unfinished" in 1923.

While in transit following an exhibition at the Brooklyn Museum in 1926-1927, the piece shattered. Duchamp glued it back together, then set it between new panes and placed it within an aluminum frame. The Philadelphia Museum of Art, which houses the piece, says the work has subsequently "become the subject of extensive scholarship, and the object of pilgrimages for countless visitors drawn to its witty, intelligent, and vastly liberating redefinition of what a work of art can be."

OMR says it is consulting with Rico and the fair's organizers about how to proceed.

"This is not a tragedy," argues Lésper. "This is something that can be fixed."