The head and skin of an East African lion killed at the turn of the century by President Theodore Roosevelt decorates The Explorers Club in New York. A committee designed to advise the Department of Interior on the benefits of big-game hunting was dissolved in December after two years. Kathy Willens/AP hide caption 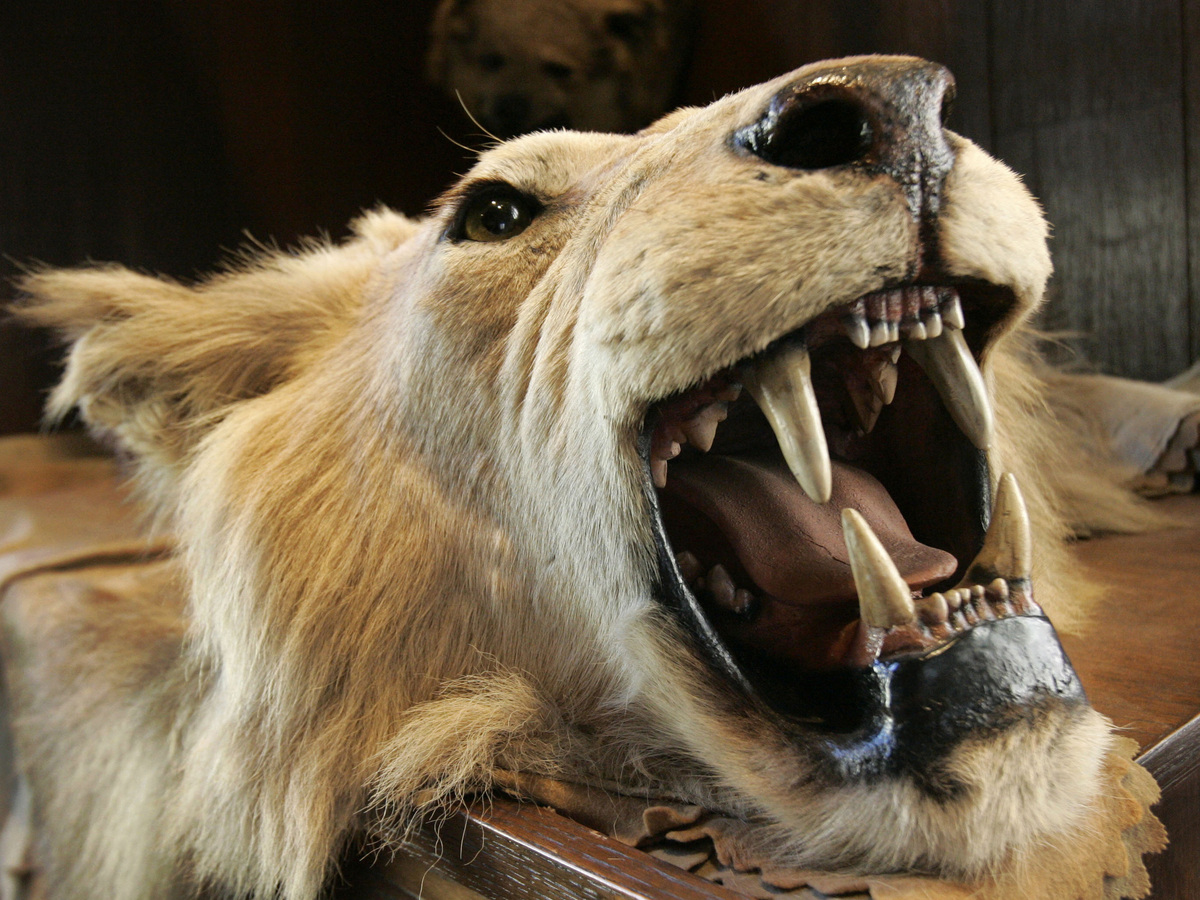 The head and skin of an East African lion killed at the turn of the century by President Theodore Roosevelt decorates The Explorers Club in New York. A committee designed to advise the Department of Interior on the benefits of big-game hunting was dissolved in December after two years.

The Trump administration disbanded a controversial wildlife advisory board that was criticized for promoting the benefits of international big game hunting. Now, the government is calling on courts to kill a years-long lawsuit it spawned.

"The Council will not meet or conduct any business again, it can no longer be renewed, and there [is] no plan to establish another committee with a similar mission or scope in the future," the Department of the Interior explained in a court filing Friday.

As a result, the lawyers argued, the New York federal court should dismiss demands by animal and environmental conservationists for rulings on information about the "formation, composition, ethics provision, or meetings" by the International Wildlife Conservation Council.

The 16-member council was created in 2017 by then-Secretary of the Interior Ryan Zinke with the understanding that the group's charter would have to be renewed by Dec. 21, 2019, or it would cease to exist. Its creation followed a move by the administration to reverse an Obama-era ban on elephant and lion trophy imports from Africa.

In all, the committee, which was funded with tax dollars, held five meetings over the two-year span and formed four sub-committees.

But, the government said, "Ultimately, the IWCC did not vote on or make any recommendations or otherwise provide any advice or work product."

Why Botswana Is Lifting Its Ban On Elephant Trophy Hunting

"I have little doubt our litigation spurred the administration's decision to abandon the IWCC and walk away from its biased and un-transparent practices," said Zak Smith, international wildlife conservation director for the Natural Resources Defense Council, one of the groups involved in the lawsuit.

"We're glad the Trump administration is closing shop on this ridiculously misguided council and we await a full accounting of its tainted work product."

The 2018 lawsuit was filed by a coalition of organizations, including the Natural Resources Defense Council, the Humane Society and the Center for Biological Diversity. They argued the IWCC was illegal because it was stacked with "an assemblage of trophy-hunting advocates" who were tasked with advising the federal agency responsible for trophy import controls.

According to the suit, the "fox and henhouse" approach to forming the committee runs afoul of the Federal Advisory Committee Act, which requires that all government advisory panels have a balanced mix of contributors that in this case should include scientists and economists.

"Congress imposed several procedural and substantive requirements on agencies establishing advisory committees, many of which Defendants ignored when designing and maintaining the Council," the groups argued.

During the IWCC's first meeting, members agreed that recreational hunting is necessary because fees paid by big-game hunters help fund conservation programs. They also said it would help boost local economies and create hundreds of jobs.

The committee's position contradicted that of President Trump who at the time, called big-game hunting a "horror show" and said he'd be hard pressed to change his mind that it "in any way helps conservation of Elephants or any other animal."

The animal rights advocacy groups contend the Interior Department cannot consider the IWCC's recommendations in its decision-making process. And they insist the dissolution of the committee does not render their lawsuit moot.