Accessibility links
Census Bureau Prepares For Hiring Spree With Unemployment Near 50-Year Low The bureau says it needs around a half-million temporary workers by this spring to carry out the national head count. Some census advocates are worried the agency isn't moving fast enough on hiring. 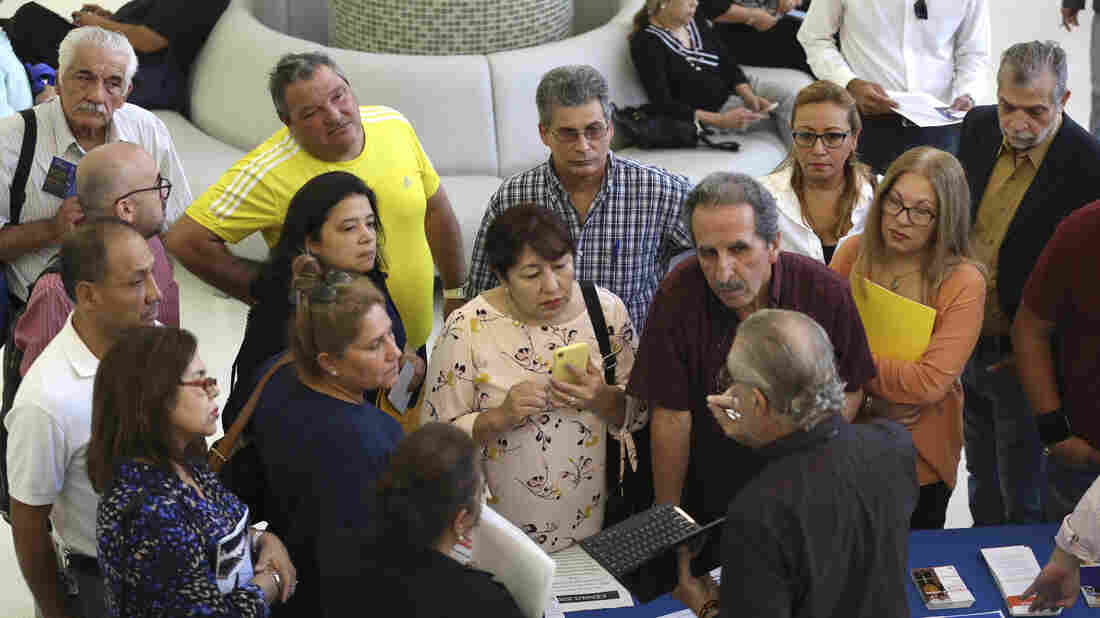 People inquire about temporary positions available for the 2020 census during a job fair in Miami in September 2019. Lynne Sladky/AP hide caption 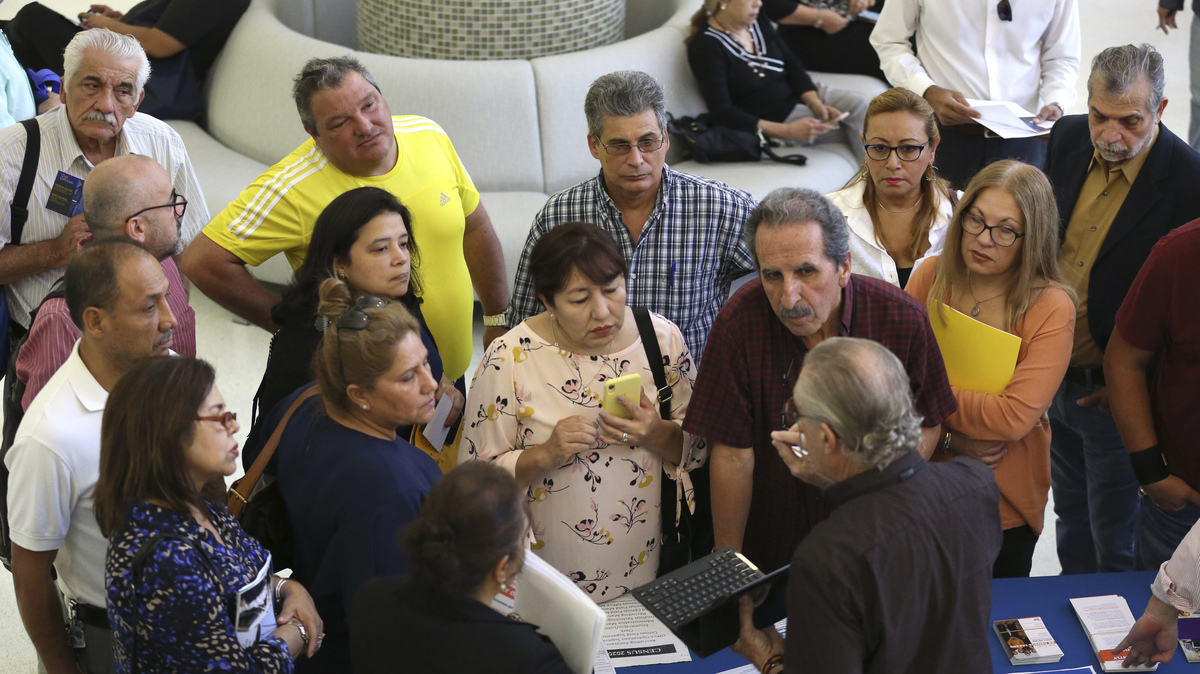 People inquire about temporary positions available for the 2020 census during a job fair in Miami in September 2019.

In these final weeks before the 2020 census is rolled out to the entire U.S., the federal government is under pressure to hire and train around a half-million door knockers and other temporary workers by this spring.

Near record low unemployment is raising concerns the Census Bureau won't be able to find enough qualified temps, who play a critical role in ensuring the bureau meets the constitutional mandate to count every person living in the country every 10 years. The population numbers set the distribution of political representation and an estimated $1.5 trillion a year in federal funding for states and local communities.

The accuracy of census information collected from historically undercounted groups hinges largely on the bureau's ability to dramatically staff up in a matter of months once a decade. Census Bureau research has shown that a disproportionate share of people of color may be left out of the count unless they receive a home visit from a census worker.

Recruiting job applicants for the 2020 census has not been as easy as it was for the last count a decade ago when plenty of people were looking for jobs after the Great Recession. With the U.S. unemployment rate now hovering around a half-century low, the Census Bureau has had to bump up pay to attract enough applicants. In December, the bureau raised hourly pay rates in 73% of counties throughout the country, according to Tim Olson, the bureau's associate director for field operations.

"Most people that are applying are either retirees, students or they already have a job," says Olson, who oversees recruiting and hiring for door knockers, also known as enumerators, plus other positions needed for following up with people in households who don't fill out a census form on their own by late April.

The bureau has been onboarding earlier waves of census workers since as early as 2016. Last month, enumerators began going door to door to count some of Alaska's most remote communities. But dogged by delays in processing background checks, the bureau has already fallen behind in onboarding specialists tasked with building relationships with local organizations that have ties to historically undercounted groups.

The bureau says it's currently processing background checks for enumerator job applicants. Olson, who oversees field operations, has said he does not expect the kinds of delays the bureau has experienced for other positions because enumerators only require a fingerprint check that takes about two hours or so.

Still, the government has not done the bulk of its hiring for the 2020 count yet.

The bureau set its recruiting and hiring targets under what Olson calls the bureau's "worst-case scenario," in which 55% of the households expected to self-respond to the census do so. But exactly how many workers the bureau will need depends on how many households actually fill out a census form online, by phone or on paper after instructions go out in March. The more households that complete census forms themselves, the fewer enumerators the government needs to send out.

"By self-responding, that means my team is not going to knock on your door," Olson adds.

"Time to ring the alarm bell"

The NAACP and the Center for Popular Democracy Action are leading two separate federal lawsuits against the Census Bureau, alleging the government is planning to send out too few enumerators and risking undercounts of communities of color.

"I'm concerned that because the Census Bureau has fallen behind in the hiring for the 2020 census, it may not have the manpower it needs to conduct follow-up operations to ensure that everyone in America fills out the census form," said Rep. Brenda Lawrence (D-Mich.) last month during a House Oversight and Reform Committee hearing on the census.

A panel of census advocates testifying during the hearing expressed similar concerns. Asked by Lawrence if the bureau is doing "all it can" for recruiting and hiring, Marc Morial, the National Urban League's president and CEO, was blunt.

"It's time to ring the alarm bell on the enumerator program," said Morial, who chaired the Census Bureau's advisory committee for the 2010 count.

Morial has been pushing the bureau to consider working with private staffing agencies and give more regular updates about census recruiting and hiring.

"We do not want to come to May and then find out that they don't have sufficient people because then there will be no recourse in terms of securing a full count," Morial tells NPR.