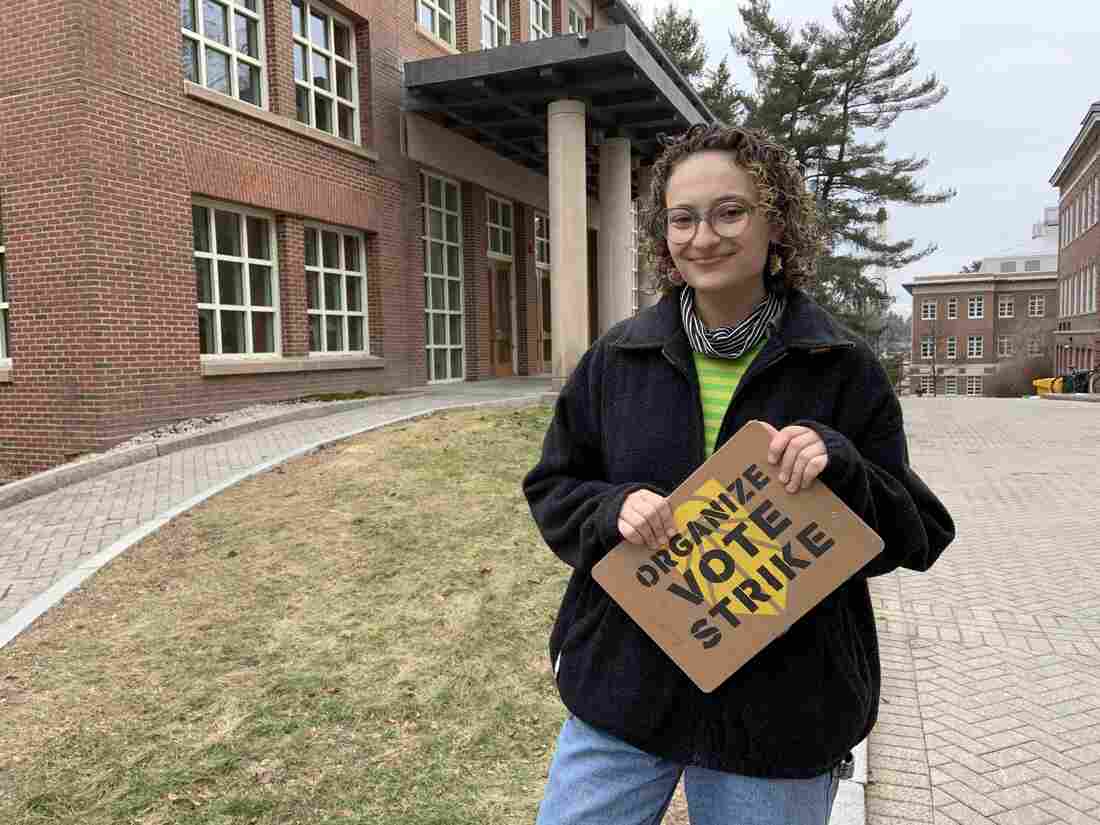 Olivia Freiwald, 20, of the New Hampshire Youth Movement and Sunrise Movement on the main campus of the University of New Hampshire. She's campaigning for Bernie Sanders, in part, because he pledges to ban fracking. Jeff Brady/NPR hide caption 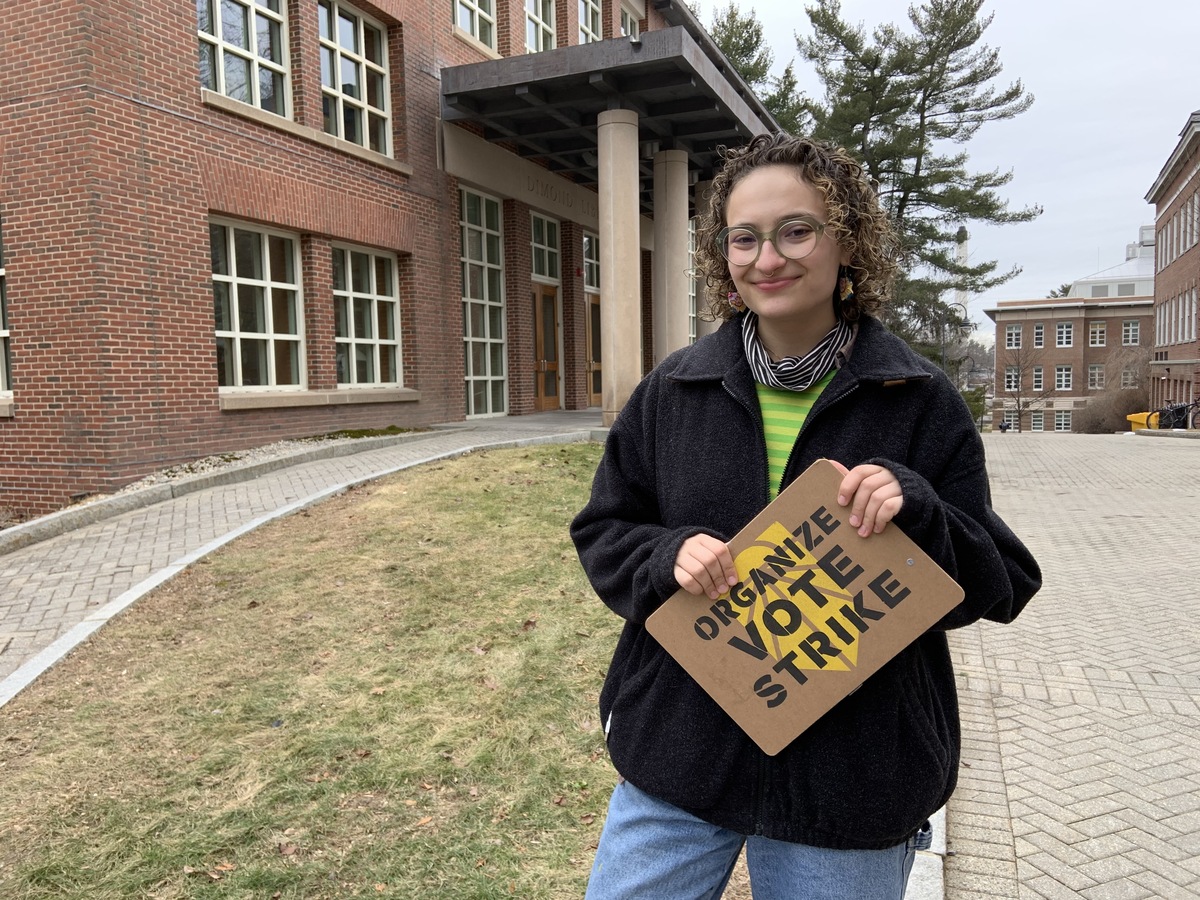 Olivia Freiwald, 20, of the New Hampshire Youth Movement and Sunrise Movement on the main campus of the University of New Hampshire. She's campaigning for Bernie Sanders, in part, because he pledges to ban fracking.

Climate change is a top issue in the Democratic presidential primaries and some candidates have taken relatively aggressive policy stands, including vows to ban hydraulic fracturing. But some Democrats worry that could push moderate voters in key swing states to reelect President Trump next November.

Fracking is a controversial drilling technology that, along with horizontal drilling, has created a major oil and gas boom. President Trump often brags about this on the campaign trail, though the boom started well before he became president.

While the president largely dismisses the effects of climate change, Democrats have made addressing the issue a key element of their energy and environment platforms.

Last September, Elizabeth Warren tweeted she would, "ban fracking—everywhere." Bernie Sanders talked about banning fracking during his 2016 run for president. For both, fracking is one element of their support for a sweeping "Green New Deal."

Sanders' environmental platform is one reason volunteers with the New Hampshire Youth Movement have deployed across six campuses asking students to vote for the U.S. senator from neighboring Vermont. The organization is affiliated with the youth climate group Sunrise Movement, which has endorsed Sanders.

Twenty-year-old volunteer Olivia Freiwald of Wynnewood, Pa., clipboard in hand, says she's taken a year off from studying at Tufts University to campaign full time. At the University of New Hampshire recently, she dismissed concerns that Sanders' environmental policies might alienate moderate voters and help reelect Trump in swing states.

"I get this question, literally, all the time, especially from people in my parent's generation," she says. Freiwald says those who ask are "hyper-obsessed" with finding a candidate who can beat Trump, but she thinks there are larger issues to consider, such as climate change.

"I just hear them being scared, and I hear them not knowing the full scale of the crisis we are facing."

Scientists warn that carbon emissions must be reduced dramatically, and quickly, to avoid the worst effects of climate change. For Freiwald and her fellow activists, the solution is a complete transition from fossil fuels.

There are some actions a president could take to limit fracking, especially on federal land and in federal waters. But a complete ban likely would require congressional action, and that would be difficult, especially if Republicans control one or both houses of congress.

Still, the oil industry has taken notice of the Democrats' proposals. Ads from the American Petroleum Institute tout the environmental benefits of expanding natural gas for electricity generation, since it emits about half the carbon emissions as coal. Those ads ignore concerns about methane, a more potent greenhouse gas, emitted during gas production. Other ads explicitly call on voters to oppose fracking bans.

The U.S. Chamber of Commerce commissioned a study that predicts job losses that would come with a fracking ban. "The first five years or so, you're going to lose 19 million jobs around the country," says Marty Durbin, president of the Chamber's Global Energy Institute.

The study predicts job losses well beyond oil and gas. Fracking ban supporters, though, imagine a much different future, with a big increase in renewable energy jobs.

Durbin and others in the oil industry aren't trying to change activists' minds. Instead they're focused on moderate and swing voters who could decide the next election in a closely divided country.

In a swing state like Pennsylvania, a major gas producer, fracking and energy are key issues. Even a small segment of voters swayed one way or another could change the election.

"Pennsylvania's 20 electoral votes in 2016 were decided by about 44,000 votes, or less than 1% of the electorate in that race," says Chris Borick, Professor of Political Science and Director of the Muhlenberg College Institute of Public Opinion.

He thinks the effect of a candidate's relatively aggressive environmental policies shouldn't be underestimated.

But for all focus on climate change among the most engaged Democrats — it was the number two issue for caucus goers in Iowa — moderate and swing voters are not paying as much attention.

"Energy and climate issues are not among the top tier of issues that voters identify as their top priority," Borick says.

In suburban Philadelphia, Meeta Patel is a good example of that. She voted for Trump in 2016 and Barack Obama before that. So far this election year she's undecided.

"I want to make sure," says Patel, "who is the other candidate that I'm comparing Trump against."

Asked how a candidate's views on fracking will affect her choice, Patel says for now she's thinking more about the cost of health insurance and her son's college education.

An earlier version of this story did not note concerns about leaks of climate-warming methane during natural gas production.