Accessibility links
Review: 'Weather,' By Jenny Offill Jenny Offill's darkly funny, urgent new novel follows a librarian who gets involved in doomsday prepping. It's a perfect portrait of our age of rising anxiety over climate change and 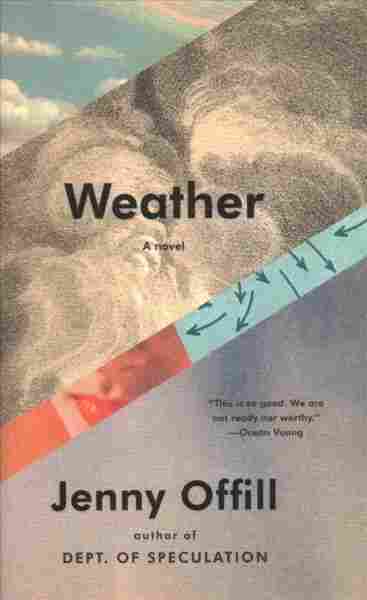 Jenny Offill broke through the funk of a 15-year gap between her first and second novels with Dept. of Speculation (2014), a wonderful series of witty, plangent short dispatches about marriage, motherhood, and thwarted aspirations from an unnamed female writer whose life ventures dangerously close to the brink.

Offill's new novel, Weather, takes a similarly clever diary-like tack, but it's even better — darkly funny and urgent, yet more outwardly focused, fueled by a growing preoccupation with the scary prospect of a doomed earth.

While marriage and motherhood remain on the radar, Weather swirls around amber waves of dread. Offill's signature achievement here is to capture the angst specific to our particular moment in time — the rising tide of anxiety, especially in New York City, about a world threatened by climate change and the ascension of right-wing strongmen, which deepens after the 2016 election. Offill astutely compares the "hum in the air" to the one that followed 9/11. This potent, appealing little book is about how we weather this sense of doom — with humor, incredulity, panic, disaster preparedness, or, best of all, action.

The novel's narrator, Lizzie Benson, has a sardonic voice and a way with punchlines. Reminiscent of Helen Ellis's off-the-wall American Housewife and Lydia Davis' micro-stories, Offill knows how to wield wit and paragraph breaks for maximum impact.

We learn that Lizzie abandoned her graduate studies to help her drug-addicted brother through a bad stretch. She became a college librarian instead — which explains her dexterity at unearthing oddball facts, including "prepper things" and survival tactics for the coming apocalypse — such as how to use a can of oil-packed tuna to generate two hours of light if you don't have candles. ("And the tuna will still be good to eat afterward.")

Offill's signature achievement here is to capture the angst specific to our particular moment in time ... about a world threatened by climate change and the ascension of right-wing strongmen

This is the kind of book you may not want to read in public, because you'll be too tempted to share Offill's tart observations with anyone not wearing earbuds. Lizzie, whose worries keep her awake, is aware of the dangers of over-zealous self-medicating from her brother: "I remind myself (as I often do) never to become so addicted to drugs or alcohol that I'm not allowed to use them," she writes. Still, "One thing good about being addicted to sleeping pills is that they don't call it addicted they call it habituated." Even the family dog is a pro at self-soothing, with "a thousand rounds of slobber frog" fetch.

For Woman At Heart Of 'Weather,' Storms Loom Over Every Horizon

For Woman At Heart Of 'Weather,' Storms Loom Over Every Horizon

Offill is a master of the glancing blow, and her portrait of life in Brooklyn is the stuff of comedy series. Lizzie lives with her husband Ben, a Classics PhD who makes educational video games for a living but reads the Stoics before breakfast. Their son, Eli, attends first grade in a large, impersonal, predominantly East Asian public school, a sharp contrast with his fancy private preschool, where an insufferable mother boasted that her son tested "gifted and talented." Their neighbors include a polite drug dealer in apartment 5C and an insufferable ranter, Mrs. Kovinski, who slips and falls while on jury duty for a slip and fall case. When Lizzie and her brother confront a driver who nearly runs them over leaving the park, the driver is unapologetic. "You and your precious lives," she sneers. It's a classic Offill zinger.

After the election, Ben urges Lizzie to take care of all her medical needs in case they lose their insurance. Dreaded dental and orthopedic appointments ensue. Her visit to the dermatologist turns out to be an unexpected high, as the doctor calls out repeatedly, "Exceedingly unlikely to be cancerous!" Lizzie comments, "I wanted every day to be like this, to begin in shame and fear and end in glorious reassurance."

But Lizzie — and our times — are not wired for glorious reassurance. Her side job answering doomsday emails from listeners of her former professor's podcast on climate change doesn't help. Nor does her brother's relapse following the birth of his daughter. Lizzie and her husband research doomsteads, rounding up the usual suspects for safe haven — "Oh, Canada!" Their list of requirements includes arable land, a water source, and train access. Ben posts an important reminder above his desk: "You are not some disinterested bystander. Exert yourself."

In Dept. of Speculation, Offill's narrator is called "a truth bomb" and a person about whom "no one has ever said ... You make it look so easy." The same might be said for sympathetic Lizzie, who again deploys sharp wit (plus a series of corny jokes forwarded from her boss) to deflect anxiety. This is what she has to say, for example, about coming down from a flirtation that was "like a wartime romance. Minus the war. Minus the sex": "And then it is another day and another and another but I will not go on about this because no doubt you too have experienced time."

We have. Wade into Weather. It will only take a few hours of your precious time.