Accessibility links
Philippines Says It Will End U.S. Security Agreement In a move that could have consequences for a counterinsurgency against Islamist extremists, President Rodrigo Duterte says Manila will unilaterally scrap the deal that lets U.S. forces train there. 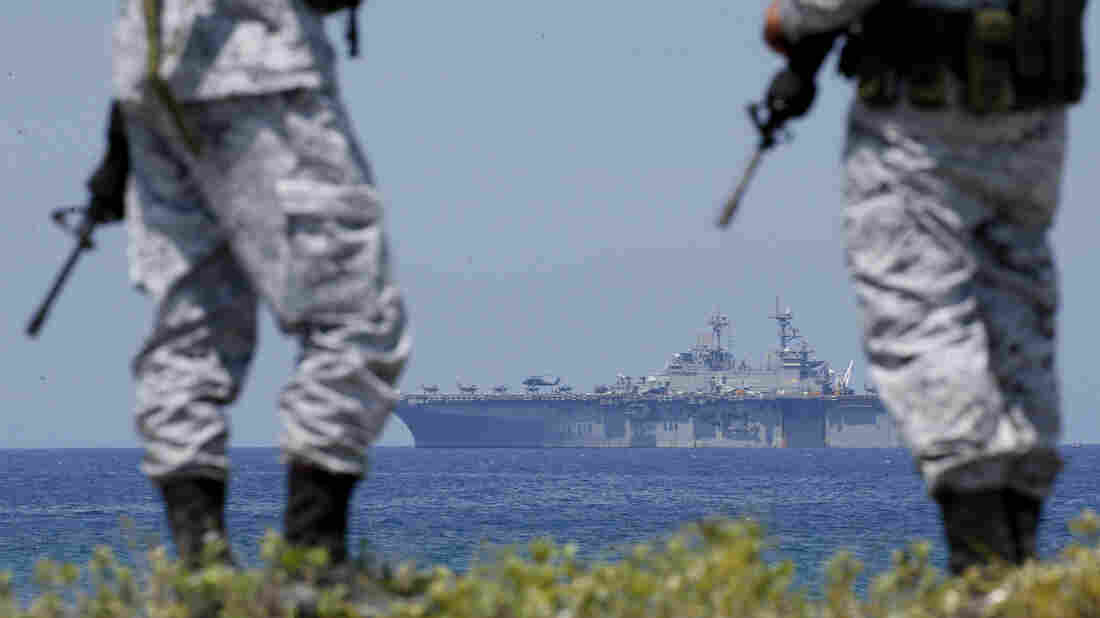 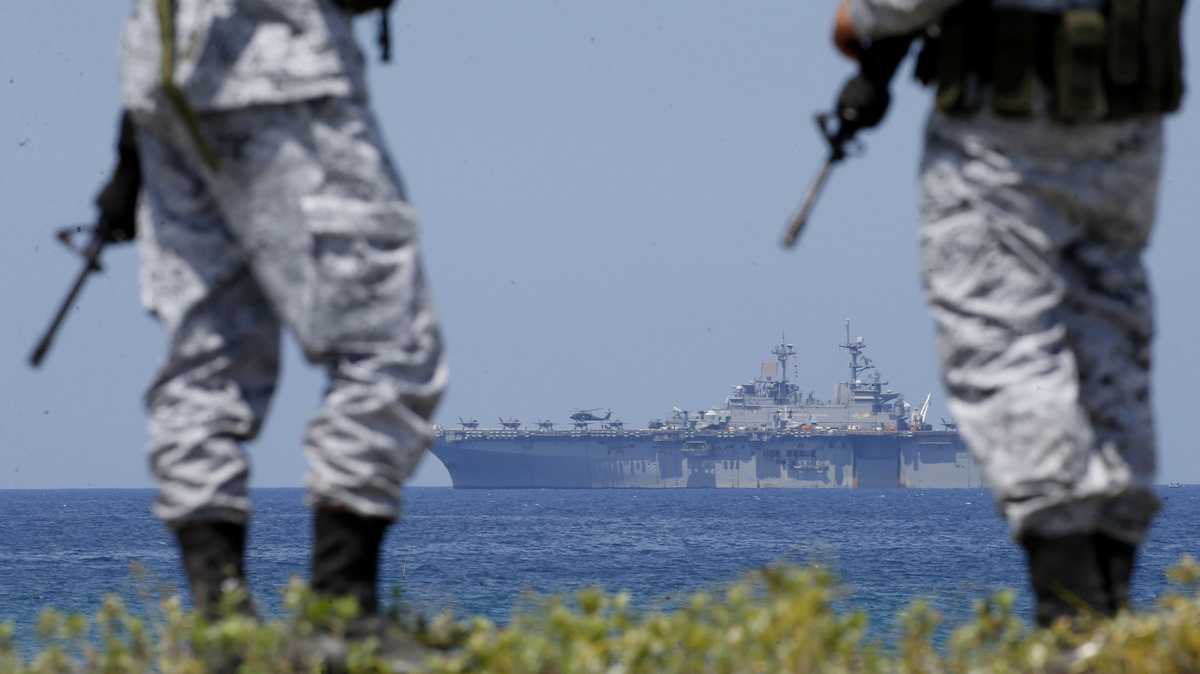 At the direction of President Rodrigo Duterte, a fierce critic of the United States, the Philippines announced Tuesday that it would scrap a security pact that allows American forces to train there.

Duterte's foreign secretary, Teodoro Locsin Jr., tweeted Tuesday that the Visiting Forces Agreement with the U.S. would be terminated — a move that could have consequences for a counterinsurgency against Islamist extremists in the country's south.

@DFAPHL The Deputy Chief of Mission of the Embassy of the United States has received the notice of termination of the Visiting Forces Agreement. As a diplomatic courtesy there will be no further factual announcements following this self-explanatory development. https://t.co/qQhywEpcea

"It's about time we rely on ourselves. We will strengthen our own defenses and not rely on any other country," Philippine presidential spokesman Salvador Panelo said at a regular press briefing, quoting Duterte.

He said Manila would be open to similar agreements with other countries. "As long as it is favorable to us and there is a mutual benefit to both countries, we are open," he said.

The 1999 Visiting Forces Agreement exempts U.S. military personnel from passport and visa regulations when they come and go for joint exercises and training of troops in the Philippines.

The move to end the pact follows anger over Washington's reported decision last month to cancel the U.S. visa of Philippine Sen. Ronald dela Rosa. The former chief of National Police, dela Rosa, enforced Duterte's brutal war on drugs, which has killed thousands and has been widely condemned by international human rights watchdogs. 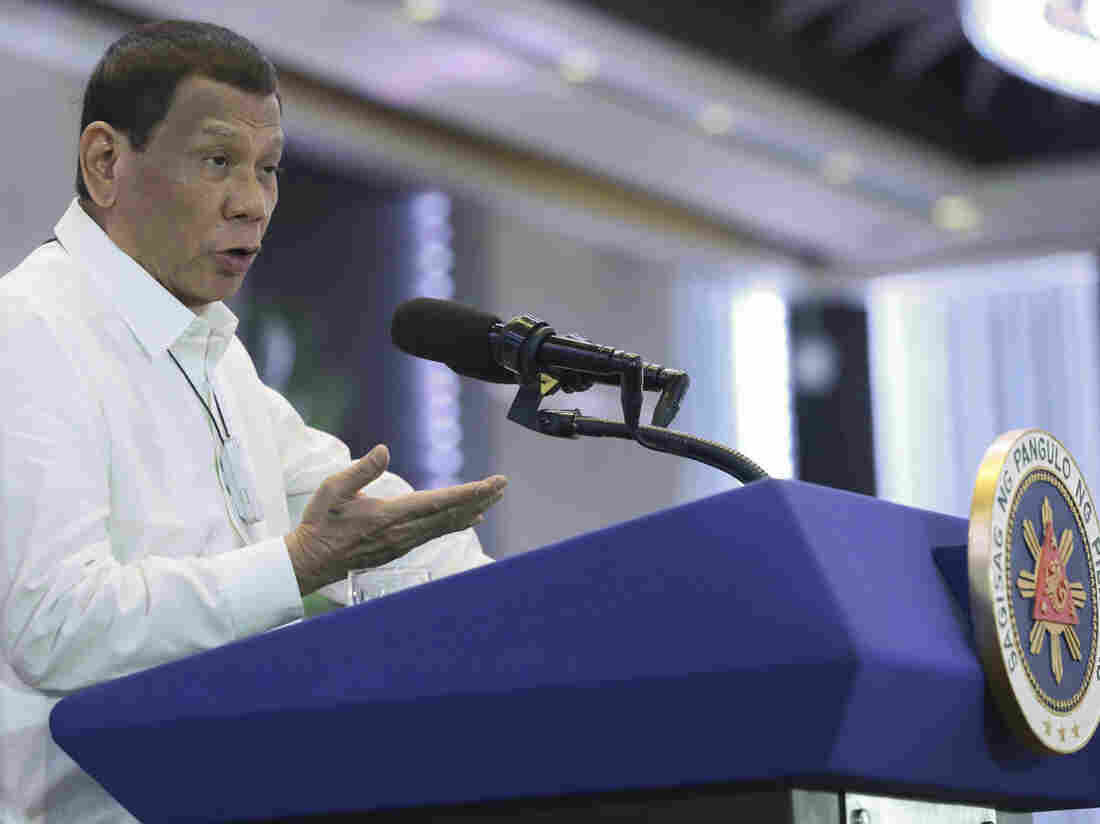 Since coming into power in 2016, Philippine President Rodrigo Duterte has executed a dramatic pivot away from the U.S. and toward China, increasingly the dominant regional power. Toto Lozano/Malacanang Presidential Photographers Division via AP hide caption 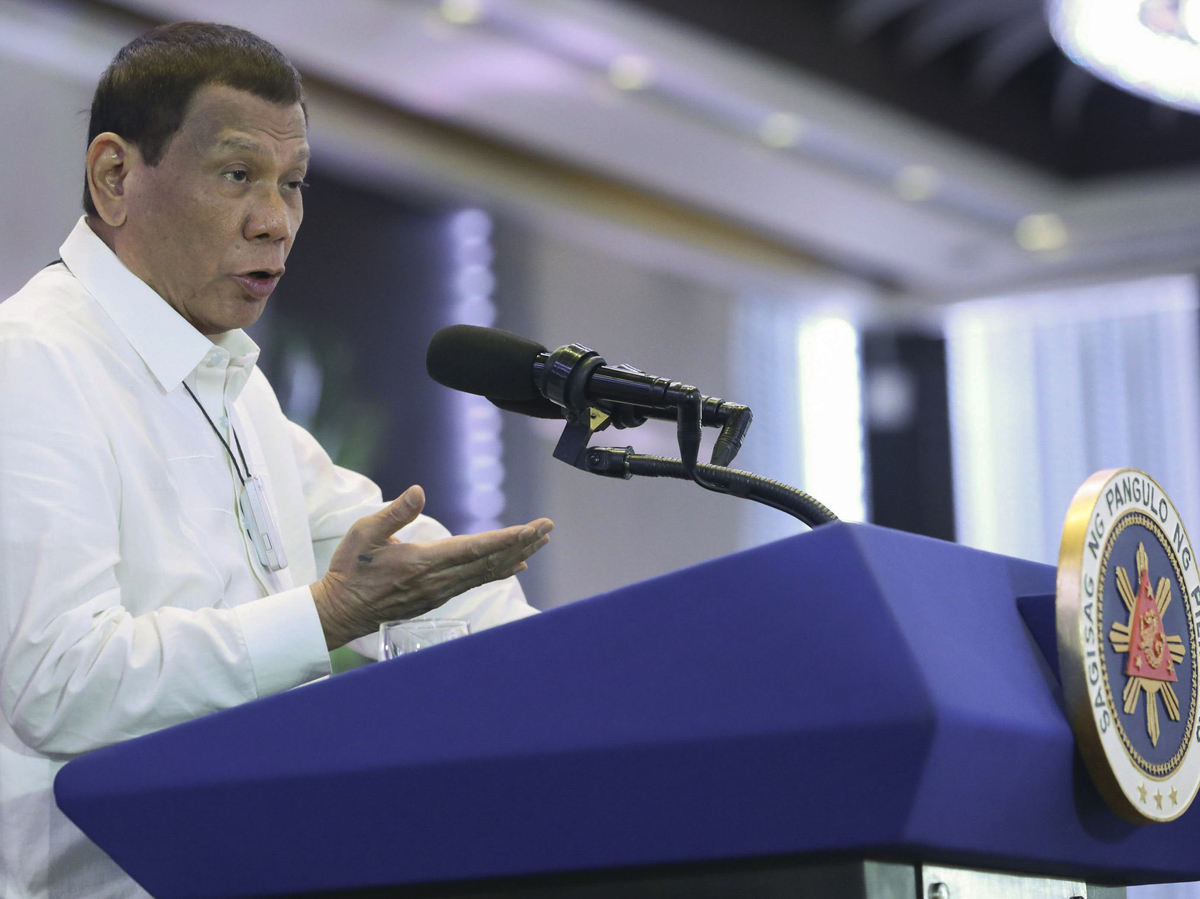 Since coming into power in 2016, Philippine President Rodrigo Duterte has executed a dramatic pivot away from the U.S. and toward China, increasingly the dominant regional power.

Duterte then demanded that the U.S. restore the visa and began publicly suggesting he would terminate the VFA if it failed to do so.

The U.S. Embassy in Manila issued a brief statement on Tuesday calling Duterte's move "a serious step with significant implications for the U.S.-Philippine alliance."

"We will carefully consider how best to move forward to advance our shared interests," the statement read.

JUST IN: The United States Embassy in the Philippines’ statement on the Visiting Forces Agreement @ABSCBNNews pic.twitter.com/M1NMXj7ew3

The U.S., which provided some $550 million in military assistance to the Philippines from 2016 to 2019, conducts joint military exercises, such as the annual joint exercise dubbed Balikatan, or "shoulder-to-shoulder," in Tagalog, with Filipino troops. Balikatan, which sometimes also includes Australian and Japanese forces, is seen as a show of force against possible military adventures by China.

The U.S. also has kept as many as 100 special forces troops on the Philippine island of Mindanao on a rotating basis to help in Manila's fight against terrorist group Abu Sayyaf and other militants linked to the Islamic State.

U.S. troops were on the ground in 2017 aiding the Philippine military during a siege of militants in the southern city of Marawi. The U.S. Navy is also seen as a bulwark against China's territorial ambitions in the South China Sea. About a third of global shipping passes through its sea lanes, and the U.S. conducts Freedom of Navigation Operations in those waters in a bid to keep them open, to China's displeasure. Such FONOPs could become increasingly dangerous as the two powers find themselves in close proximity. 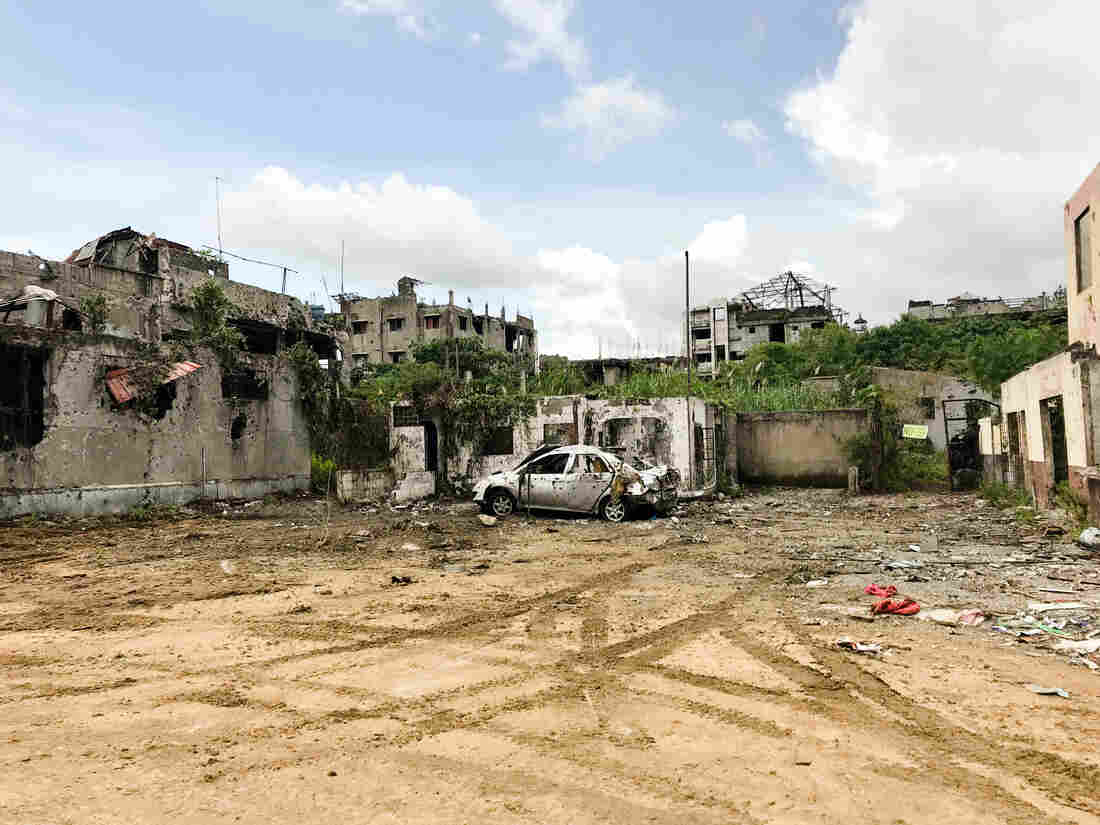 A bullet-ridden car left inside the zone most affected by the ISIS siege in Marawi. The area is a commercial center of about 1 square mile, where more than 6,000 homes, buildings, schools and mosques were destroyed. Ella Mage/NPR hide caption 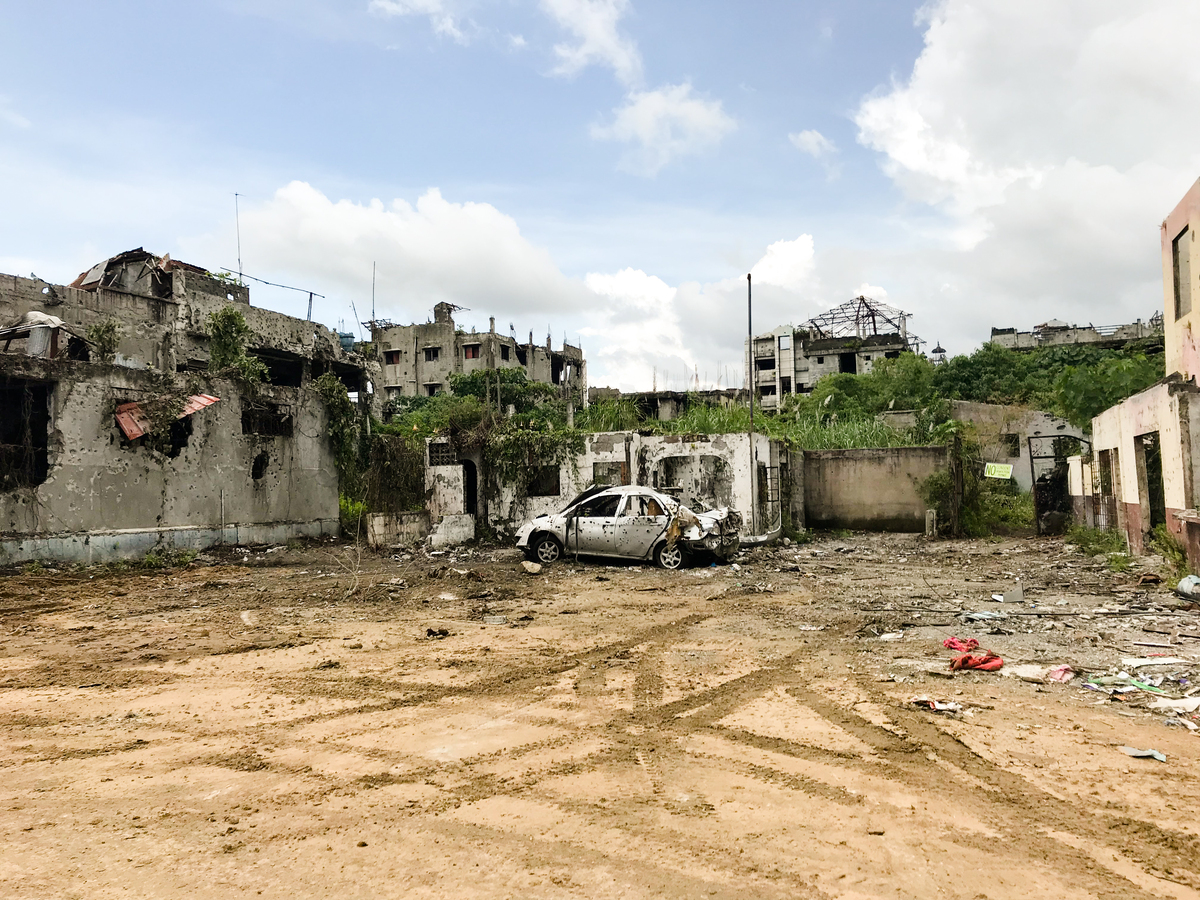 A bullet-ridden car left inside the zone most affected by the ISIS siege in Marawi. The area is a commercial center of about 1 square mile, where more than 6,000 homes, buildings, schools and mosques were destroyed.

The Philippines, a former U.S. territory that gained independence in 1946, has long viewed Washington as its strongest ally. Besides the VFA, it also has a Mutual Defense Treaty with the U.S. that dates back to the 1950s. But some analysts say that pact, along with the Obama administration's Enhanced Defense Cooperation Agreement, could be in jeopardy if the agreement governing visiting U.S. forces is scrapped.

Duterte came to office three years ago with strong words for Washington. Among other things, he has said the U.S. treats the Philippines as "like a dog on a leash" and has accused U.S. forces of clandestine activities in the country. After assuming power in 2016, Duterte executed a dramatic pivot away from the U.S. and toward China, increasingly the dominant regional power. Renato de Castro, professor of international studies at De La Salle University in Manila, told NPR that the decision to jettison the Visiting Forces Agreement is part of "Duterte's desire to do away with the U.S., so there is no obstacle in his pivot to China." He says the cancellation of dela Rosa's visa "is merely an excuse."

The U.S. has 180 days to respond to the notice of the VFA's termination.

Duterte has said that President Trump wants to save the deal. However, The Philippines Star quotes presidential spokesman Panelo as saying Duterte "will not entertain" entreaties from the U.S. nor will he accept an invitation to visit the White House.

But in one tweet, Foreign Affairs Secretary Locsin seemed to suggest the cancellation of the pact was mostly a bargaining tactic aimed at getting some unspecified concessions from Washington.

You're the only one who got that. Other reactions have been idiotic. https://t.co/lRgNVOBztN

And last week, in a televised Senate hearing, Locsin noted the crucial security, trade and economic benefits that the accord provides.

"Terminating the VFA will negatively impact the Philippine security and defense arrangements, as well as the overall bilateral relations of the Philippines with the U.S., and perhaps even on the sub-regional level," he said, adding, "Our contribution to regional defense is anchored on our military alliance with the world's last superpower."

In a previous version of this story, we misspelled the last name of Teodoro Locsin Jr. as Locson.