Accessibility links
109 U.S. Troops Suffered Brain Injuries In Iran Strike, Pentagon Says Of the 109 who were injured, 76 have returned to duty. But 21 service members who were taken from Iraq to Germany for medical care have now been brought to the U.S. 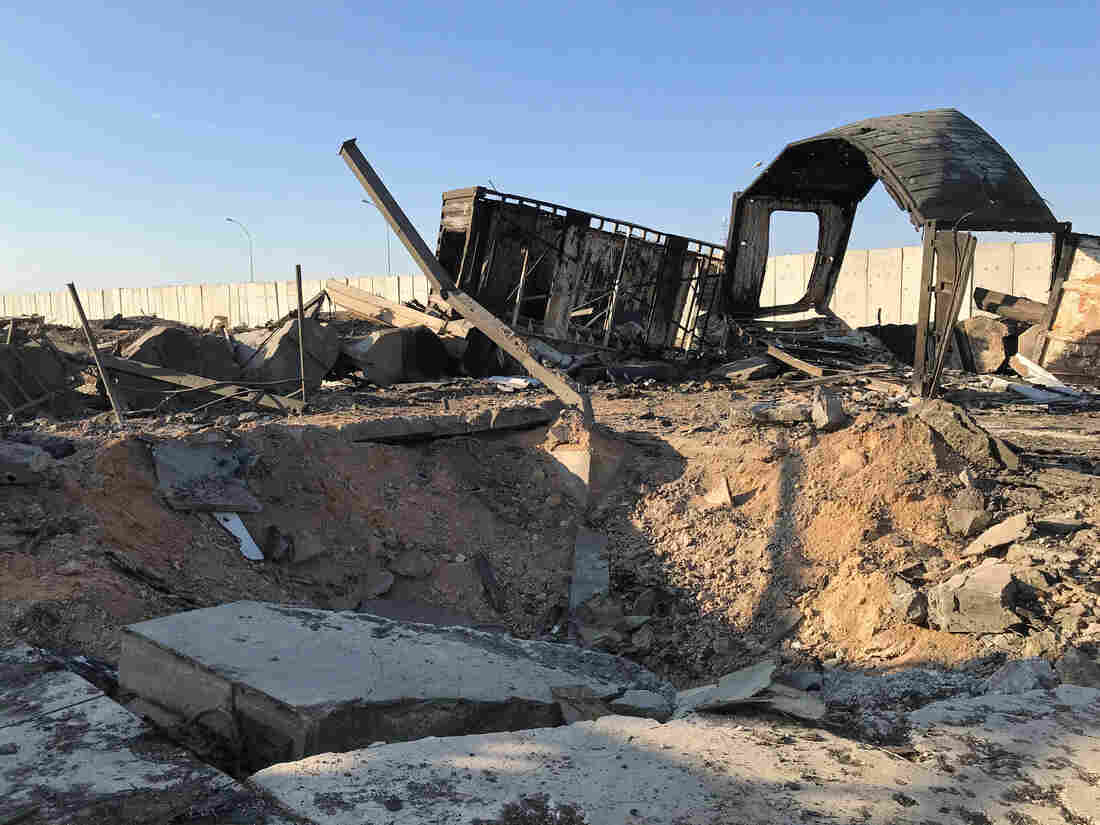 Debris and rubble are seen at the site where an Iranian missile struck Ain al-Asad air base in Iraq's Anbar province in January. The U.S. has repeatedly raised its injury report from the strike; it now says 109 personnel suffered brain injuries. John Davison/Reuters hide caption 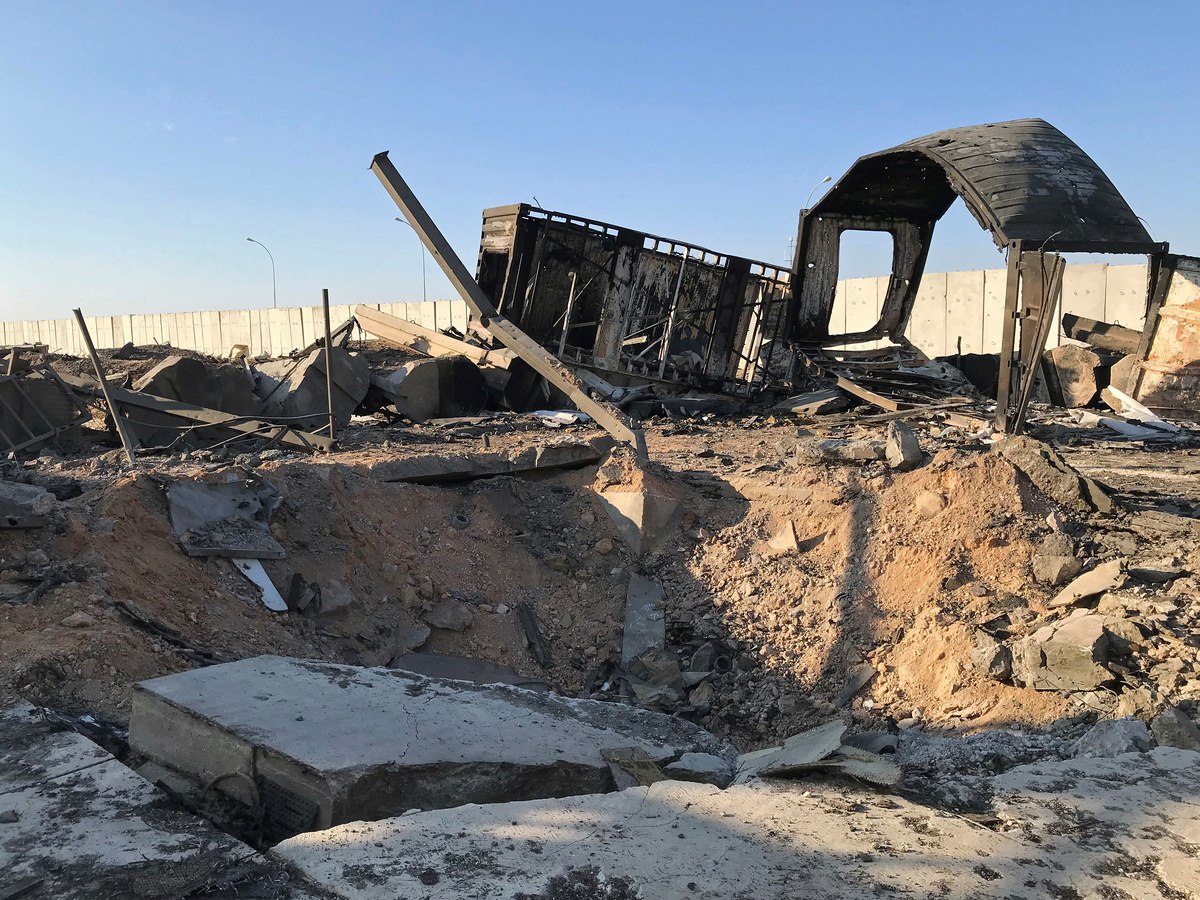 Debris and rubble are seen at the site where an Iranian missile struck Ain al-Asad air base in Iraq's Anbar province in January. The U.S. has repeatedly raised its injury report from the strike; it now says 109 personnel suffered brain injuries.

The Defense Department says 45 more U.S. service members have been diagnosed with traumatic brain injuries after Iran's attack on the Ain al-Asad airbase in Iraq last month — raising the total number of troops injured in the ballistic missile strike to 109.

Of those who were injured, 76 have returned to duty. A Pentagon statement about the injuries did not include details about the service members, such as their age, rank or military unit.

Monday's update is at least the fifth time the U.S. has revised the number of personnel injured during the Iranian attack.

President Trump initially reported no U.S. troops were injured. "No Americans were harmed in last night's attack by the Iranian regime," Trump said shortly after the strike. He added, "We suffered no casualties."

But the Pentagon later said that 11 people had suffered TBI. And on Jan. 24, the number jumped to 34. Nearly a week later, the Pentagon said 50 personnel were injured, only to revise the figure days later to 64.

Discussing the increased injury toll given late last month, Gen. Mark A. Milley, chairman of the Joint Chiefs of Staff, said that TBI often "takes some time to manifest itself."

Milley has also said the military will take good care of the service members who suffered traumatic brain injuries in Iraq, saying they will be monitored for "the rest of their lives" and receive any treatment they need.

According to the Pentagon's breakdown of the 109 military personnel's status. (Some service members are listed in more than one category.)

The Iranian attack targeted at least two Iraqi military bases housing U.S. personnel, including Ain al-Asad. Iran's action was in retaliation for the U.S. drone strike that killed one of its most prominent military commanders, Maj. Gen. Qassem Soleimani.

Trump recently seemed to downplay the service members' condition, saying in late January, "I heard that they had headaches and a couple of other things, but I would say, and I can report, it is not very serious."

The president reiterated that stance in an interview with Fox Business on Monday night. And he described how he was initially impressed that no one was killed in the Iranian missile barrage.

"And then a couple of weeks later, I started hearing about people having to do with trauma — head trauma," Trump said. "And that exists, but it's, you know, I viewed it a little bit differently than most, and I won't be changing my mind on that."

An expert on combat-related brain injuries such as TBI, David Cifu of Virginia Commonwealth University, recently told NPR: "All concussions, all brain injuries are serious. So they're serious."

Cifu added, "The good news is that 95% to 98% of people with concussions who are diagnosed early on, who are managed in a comprehensive way, which the military knows how to do, are going to do well, are going to have wonderful short- and long-term outcomes."

But the doctor, who leads a national team researching brain injuries, said that if concussions, TBI and similar conditions aren't diagnosed and treated early, patients face a higher risk of additional problems or symptoms.

Cifu noted that among civilians, concussions aren't diagnosed 50% of the time and said that in regard to U.S. military personnel injured at Ain al-Asad, "the important thing is it's diagnosed now and they're acting on it."

The Defense Department is committed to providing "the best possible outcomes for our service members," Alyssa Farah, the Pentagon press secretary, said in the statement about the latest injury report.

"We are grateful to the efforts of our medical professionals who have worked diligently to ensure the appropriate level of care for our service members," Farah said, "which has enabled nearly 70 percent of those diagnosed to return to duty."