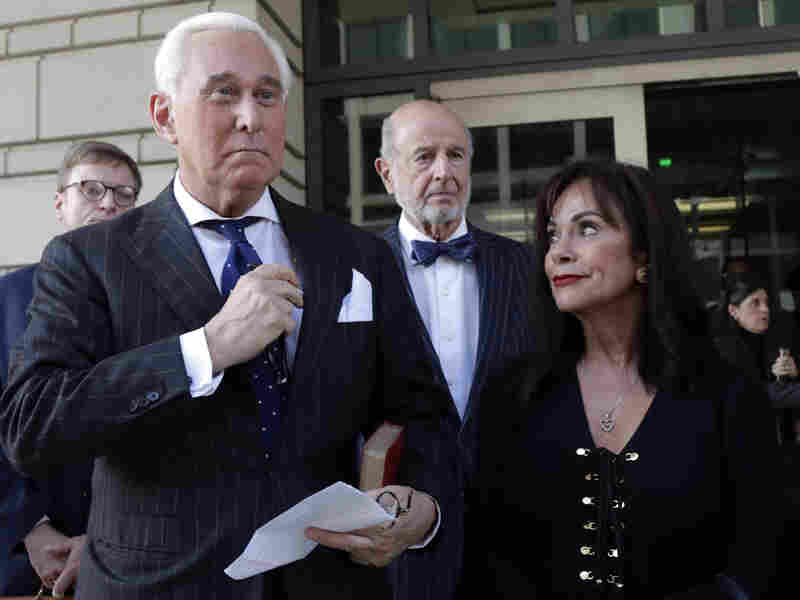 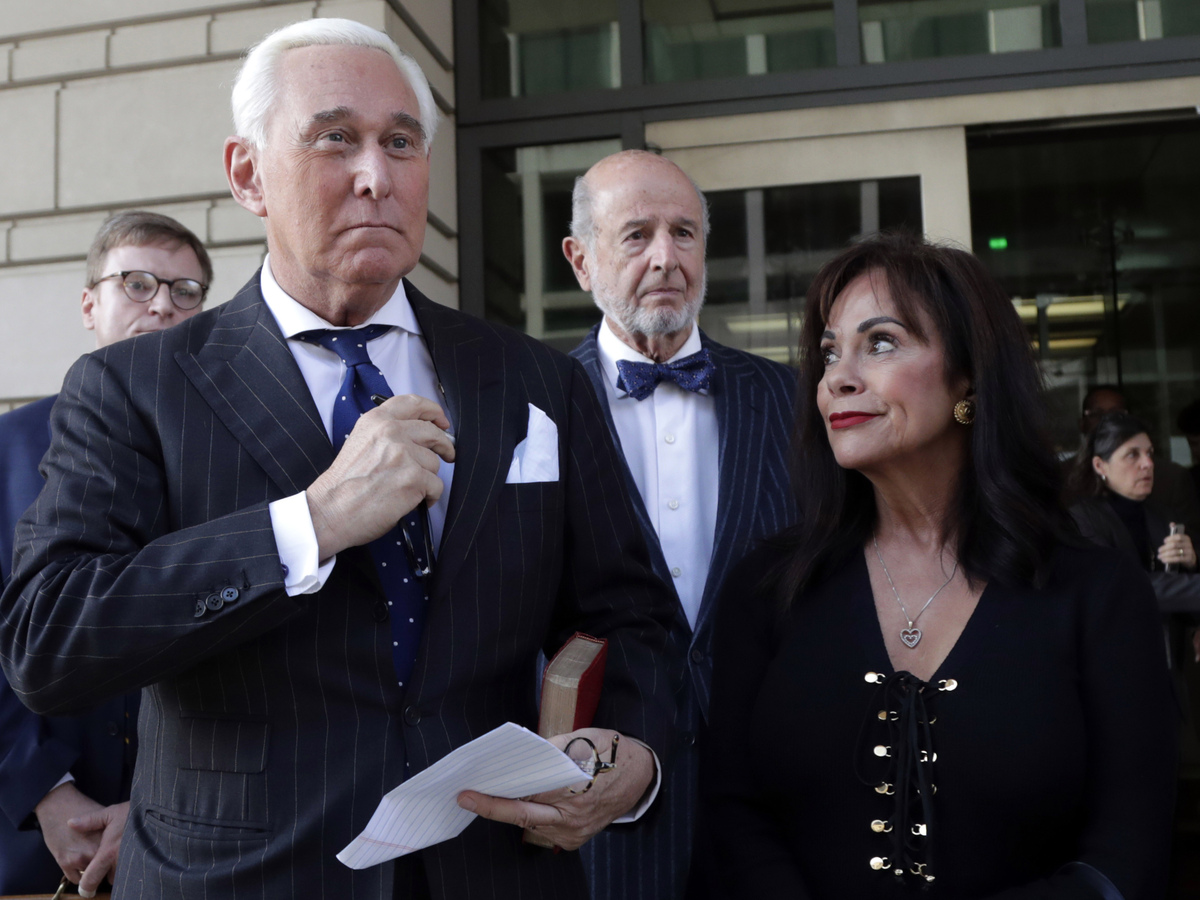 Roger Stone leaves federal court with his wife, Nydia Stone, on the day he was found guilty last fall.

Four federal prosecutors withdrew from the Roger Stone case on Tuesday, hours after the Justice Department took the unusual step of intervening in the case to seek a shorter sentence for the longtime ally of the president.

The four prosecutors who filed their papers with the court to withdraw are Aaron Zelinsky, Jonathan Kravis, Adam Jed and Michael Marando.

Zelinsky resigned as a special assistant U.S. Attorney in the Washington D.C. office. It appears he continues to work for the Justice Department in his earlier capacity with the Maryland U.S. Attorney's Office.

Kravis resigned as a prosecutor in the U.S. Attorney's office for D.C. Jed and Marando said they are withdrawing from the case.

At issue is the prison term prosecutors recommended for Stone, who sought to serve as an intermediary between Trump's 2016 presidential campaign and WikiLeaks. He was found guilty last November on several charges, including lying to Congress, and is awaiting sentencing.

So the department ordered the submission of a second sentencing memo in the case, displacing the first. The second memo, which appeared with court records on Tuesday afternoon, said that a sentence "far less" than the prospective seven to nine years in prison "would be reasonable under the circumstances." It did not make a specific recommendation.

Judge Amy Berman Jackson has the ultimate authority to hand down the sentence in Stone's case and the government said in its second filing that it deferred to her.

The back and forth over Stone's sentence followed a post on Twitter by Trump on Tuesday that faulted the recommended sentence.

Officials didn't make any explicit link between the president's tweet and the Justice Department's planned action. The senior Justice Department official said that department leadership had resolved on Monday evening to challenge the initial sentencing memo, before the Twitter post.

This is a horrible and very unfair situation. The real crimes were on the other side, as nothing happens to them. Cannot allow this miscarriage of justice! https://t.co/rHPfYX6Vbv

The president told reporters at the White House on Tuesday that he hadn't asked the Justice Department for a reduced sentence for Stone. Trump declined to comment when asked whether he was considering a pardon for his ally.

Trump's critics blasted what they called the president's attempt to influence what are supposed to be the independent workings of the Justice Department.

House Judiciary Committee Chairman Jerry Nadler, D-N.Y., vowed in his own Twitter post that the panel would investigate.

A President who intervenes in the criminal justice system to help his allies, while punishing people like Lt. Col. Vindman for telling the truth, represents a real danger and the Committee will get to the bottom of this. 2/2

Elsewhere on Tuesday, Senate Minority Leader Chuck Schumer, D-N.Y., called on the Justice Department's inspector general to investigate the events leading up to the submission of the second sentencing memo.

"This situation has all the indicia of improper political interference in a criminal prosecution," Schumer wrote to Inspector General Michael Horowitz.

Stone and his camp sought to serve as intermediaries between Trump's campaign and WikiLeaks during the 2016 presidential election, though Stone said he did nothing wrong.

He maintained that he had no inside knowledge about the Russian attack on the election or WikiLeaks' role and that he was only talking up his own importance.

Prosecutors, however, charged him with lying to Congress, obstructing its investigation and witness tampering.

Stone was convicted on all seven counts in his trial by a federal jury in November. The judge has scheduled sentencing for next week. Ahead of that, prosecutors and Stone's defense team filed their respective sentencing memos Monday, which prompted the subsequent reaction.