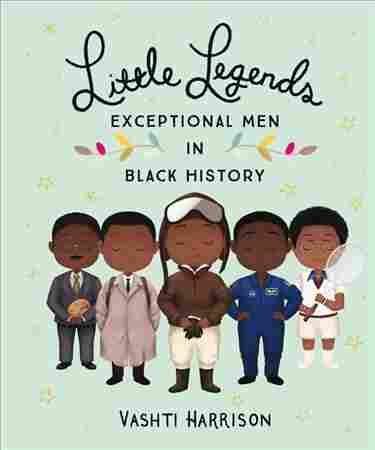 by Vashti Harrison and Kwesi Johnson

Little Legends celebrates exceptional men in black history; it's by the author-illustrator Vashti Harrison. She says she thought long and hard about taking on this subject matter, because she relates more to women's stories.

"My first book Little Leaders: Bold Women in Black History ... came from a really personal place," Harrison says. "I was thinking about the stories that I needed to see when I was a little kid. From the moment it got announced people were asking me, 'Are you going to write one about black men as well?'"

Eventually she gave in, since demand was so high for a followup — and the result was Little Legends. On every other page, Harrison's detailed illustrations bring each profile to life. And there's one thing they all have in common: She's drawn every one with their eyes closed.

"I really wanted to create this sweet, simple character," she says. "I could have drawn each of these famous people to look like themselves, but I wanted to create a child character and kind of make it look like they were almost dressing up as these famous people. They've got their eyes closed, with this sweet smile. And I wanted it to feel like they're kind of imagining themselves in the worlds of these wonderful people. But I also wanted to create a beautiful book ... something that featured characters of color, people of color in a book that looks like it belongs on the shelf next to Winnie the Pooh and Madeline and Eloise."

On choosing which men to profile

It was not easy. There was, I think, originally a list of about 100 people, obviously so many incredible people who could have gone in. But one thing that was really important for me in the first book, that I carried over into this one, was showcasing a diverse list of fields of study. Sure, there are doctors and lawyers and activists, but also engineers and cyclists and artists, because there's a question that a lot of adults ask kids — and I don't really like this question so much. When I was little, I didn't love it. But it's what do you want to be when you grow up? ... I mean, I don't think you should have to know too early. Great if you do. But also cool if you don't. But I wanted to be able to fill kids up with the knowledge of all these different paths and fields of study. So when they're ready to answer, they'll know about all these cool folks that came before them. 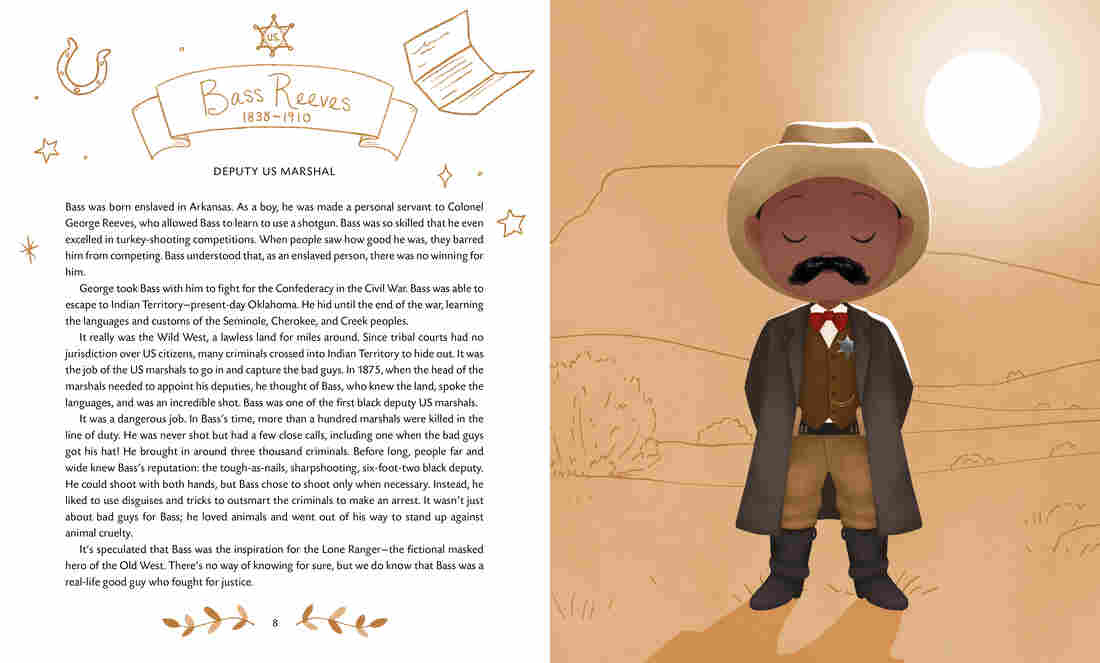 On choosing men who may not be as well-known

Originally, you know, when I was thinking about my first book, I was thinking about Black History Month. And why is it that we actually celebrate Black History Month when Carter G. Woodson founded Negro History Week in 1926? His goal was to celebrate the stories that have been long neglected throughout history. So I felt like, here's an opportunity to showcase some names that you wouldn't maybe come across in the mainstream. So when you go to the bookstore, there are lots of books featuring Martin Luther King Jr. and Barack Obama. I wanted to be able to showcase some names that you may not see everywhere else, so like Bass Reeves and John Robinson. But obviously there are some big names because ... I hoped that, you know, people would share this book. And just in case it was someone's first introduction to black history, there are a few big names. 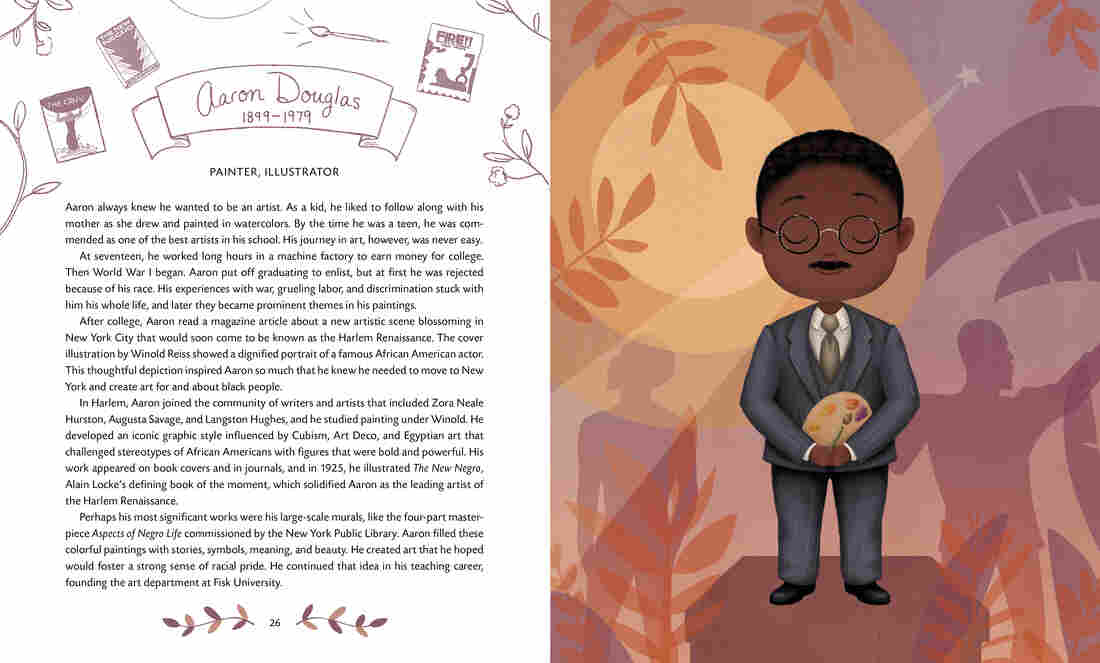 On the artist Aaron Douglas

I mean, I definitely have a soft spot for the artists. So one of my favorites is Aaron Douglas for sure. You know, his work was just really just so beautiful. He was a master of color, and he was making artwork for and about black people in a time before anyone considered black to be beautiful. And he just made his work so unique. He combined Art Deco and Cubism and Egyptian hieroglyphics to create this bold style that became the look for the Harlem Renaissance. His work was everywhere on posters, on book covers, in magazines. And I just, I love everything he's created.

On how these men responded to the racism around them

What I really wanted kids to connect with was this passion and joy that a lot of these people found in the things that they were doing. Someone like Major Taylor, who faced incredible racism and prejudice in the cycling industry. He still went after his love and and enjoyed it and found beauty in it. And I really wanted to be able to share that with kids. 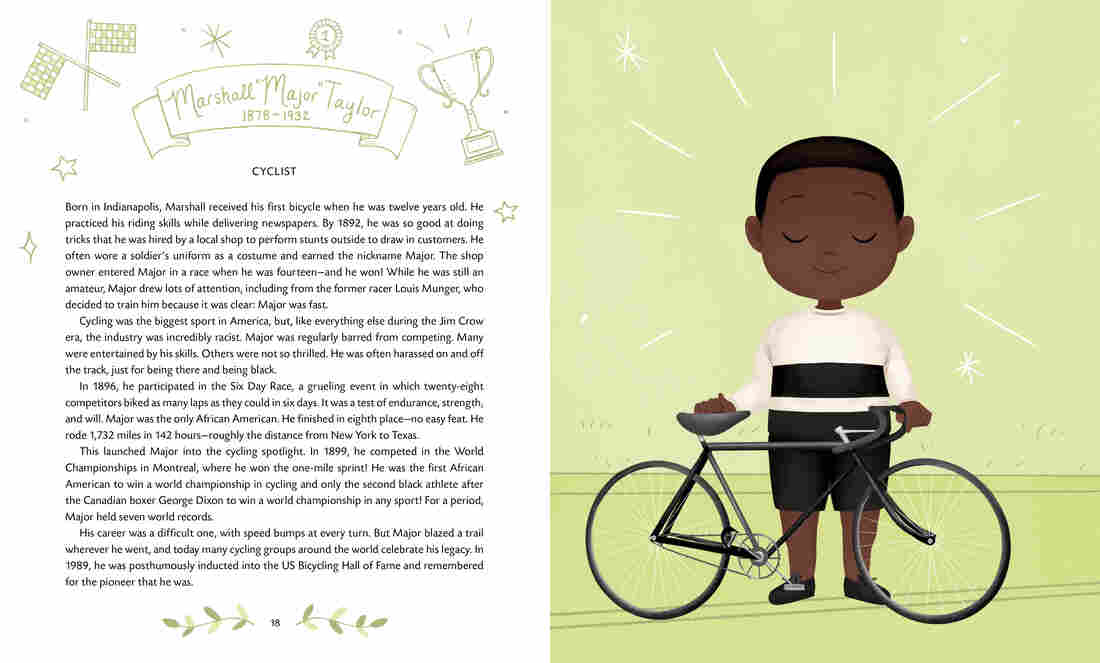 I mean, it's a harsh reality that a lot of parents of color, children of color experience often way too early. But what I really want them to know is that through hard work, through grace, through kindness and through passion, these people found and created lives that were meaningful and made work that was meaningful for other people. It was tough tackling some of these subjects. It's dark. Our history is dark sometimes. And I found it was really important to just put it all out there. You know, it was reality. And so I really just want these young readers to know that that didn't define them. These hardships didn't define them, but it was their love and their kindness and their goodness that made a difference in the world.

This interview was produced for radio by Reena Advani and Victoria Whitley-Berry, and adapted for the Web by Petra Mayer.