Accessibility links
No Easy Solutions To Housing Inequities, 'Golden Gates' Author Shows Journalist Conor Dougherty doesn't traffic radical ideas in Golden Gates, but tells the story of housing in all its complexity, acknowledging that imperfect solutions are often the only solutions. 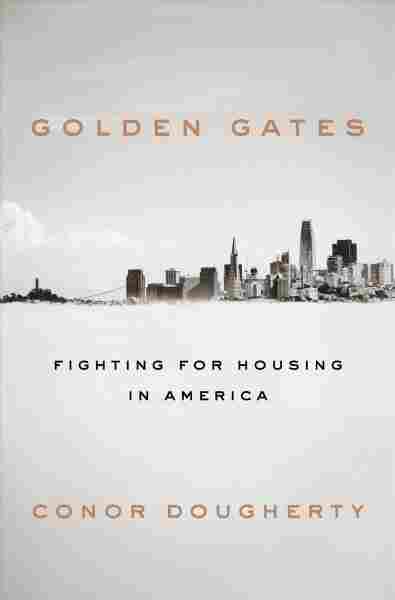 Fighting for Housing in America

Non-wealthy people living in major American metro areas, particularly on the coasts, continue to feel the weight of ever-rising rents and home prices long after they first ceased to be affordable. And that weight is usually compounded with other struggles, like paying student debt, keeping health insurance or simply finding the money for basic necessities.

The housing crisis is driven by many factors, like supply shortage, zoning restrictions, NIMBYism (the not in my backyard argument), structural racism, gentrification, and private wealth interest. So, given all that, how do you make housing sustainable and attainable? No matter which way you look, the housing crisis confounds simple solutions.

Reading Conor Dougherty's informative, evenly paced, but often too locally focused Golden Gates: Fighting for Housing in America, I waited for solutions. I thought that Dougherty, an economics reporter for The New York Times, might point the way forward — something that has eluded activists and politicians alike for decades. But I quickly realized it wasn't going to be that easy. Dougherty, like many good reporters, doesn't traffic radical solutions or broad panaceas, but instead tells the story of housing in all its complexity. And, with it, he tells the story of people who have fought pyrrhic battles for the dignity of a roof over their heads.

Golden Gates uses San Francisco specifically, and the Bay Area generally, to focus the issue of housing inequity. And while it expertly lays out the structural problems precluding affordable housing, the book's very local focus makes it seem too much about just the housing tragedy of the Bay Area. It faintly acts as an allegory of the national housing crisis — but you have to remind yourself continually that this is the case. It often evokes nostalgia, as if a love letter to a bygone Bay Area now struggling to keep its soul amidst the torrents of tech money relentlessly raining down on it.

The book's real strength is in the stories Dougherty tells of various activists, politicians and residents in their fight for fair housing. The primary story in the book is that of Sonja Trauss, a former graduate student who early becomes dedicated to the cause of affordable housing and remains indefatigable in the cause. She organizes and speaks — and even runs for the San Francisco Board of Supervisors. Along the way, she meets head-on the hard realities and competing forces of developers, business and local government that make housing such a hard problem to tackle.

Yet maybe the most perfect distillation of the complexity of housing in the book is the political career of California State Sen. Scott Wiener. "Come campaign time," Dougherty relates, "Scott Wiener was either San Francisco's most outspoken proponent of more housing or the city's biggest developer shill, depending on who was talking." And he tried to prove himself worthy of the issues at hand. Wiener "frequently tried to remind people that even though he was in favor of making it easier to build market-rate housing, he also supported rent control, had done more than most to make it easier to build subsidized housing, and voted yes on pretty much every affordable housing tax." To many San Franciscans, however, he'd never be a credible voice against market forces and their civic accomplices pricing them out of their city.

Even if metro areas suddenly and dramatically expanded housing construction, they're going to be catching up for awhile after decades of supply shortage. So one of the best possible mitigations is an expansion of Section 8 rental vouchers beyond the fortunate few among poorer renters who already have them. According to Dougherty, the federal government already subsidizes homeownership up to about $70 billion per year through tax breaks, whether it's offset in the federal budget or not. Meanwhile, Congress allocates only about $20 billion per year to Section 8 vouchers, which he points out "have been shown to be highly effective at reducing homelessness, and cost far less than the morally repugnant alternative of letting people live in tents and rot on sidewalks, consuming police resources and using the emergency room as a public hospital." He concludes:

"The message of this dichotomy...is that America is willing to subsidize as much debt as homeowners can gorge themselves on but that poor renters, the majority of whom live in market-rate apartments, are a penny-ante side issue unworthy of being prioritized."

"Mixed solutions can feel like a cop-out, especially in polarized times. And yet, over and over, in city after city, it's always where people end up and what seems most likely to work. There's no way to rectify a housing shortage other than to build housing, and there's no way to take care of people whom the private market won't take care of other than subsidies or rent control, or both. The details are democracy."

It's important to point out this isn't a both-sides equivocation, a capitulation to the status quo. Rather, it's an acknowledgment that imperfect solutions are often the only solutions especially, it seems, in housing.