Accessibility links
Review: 'And I Do Not Forgive You,' By Amber Sparks Amber Sparks' new story collection is full of vivid language, compelling imagery, sharp wit and tenderness; many of the pieces also share a thread of anger in their treatment of the patriarchy. 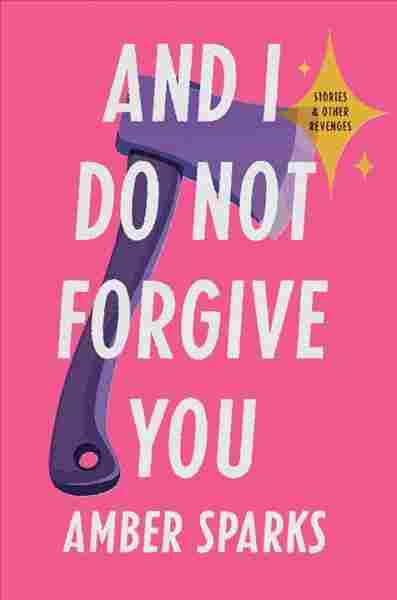 And I Do Not Forgive You

Stories and Other Revenges

If the 22 stories ("& Other Revenges") that make up Amber Sparks's newest collection, And I Do Not Forgive You, were a mix tape, or mix CD, or more contemporarily, a playlist, it would be the kind you'd listen to after a breakup. But also the type you'd sing along with while driving on a perfect summer afternoon. Or that you'd put on late at night, curled up next to your best friend, sharing headphones and a mattress and each other's warmth. Each story feels like it belongs here, but also like it stands alone so well you want to read it on repeat, and while the range of emotions evoked in the collection as a whole is broad, I found myself most often sitting with that indescribable ache that characterizes the bittersweet.

The opening piece, "Mildly Happy, with Moments of Joy" is a love story: "They meet cute, staking out the same spot at a dingy corner coffee shop to plug in a laptop. They both cling to the tail end of journalism, that ugly scaly thing shrieking for clicks and shares." But they aren't lovers — instead, these two unnamed women become best friends, sharing a particularly memorable and intense relationship that spans years and marriages and babies and a divorce until, very suddenly, it ends, leaving one of them bereft, confused, essentially dumped: "She feels she's missed a beat, a line. A scene has been left accidentally on the cutting room floor." It's hard to overstate the unspeakable sorrow of friendship breakups to those who haven't gone through one, but how incredible — and painful — it is to witness Sparks holding up such a clear mirror to it.

I'm not the first — nor will I be the last — to say that many titles in this collection should win awards all by themselves, especially "In Which Athena Designs a Video Game with the Express Purpose of Trolling Her Father," a story which is, indeed, about the Athena you're thinking of, designing a video game and telling her father Zeus about it while he watches college basketball with mustard in his beard. Like this one, many of Sparks's stories poke fun at, get back at, or call out the patriarchal structures that produce men who keep reinforcing those systems and treat women terribly or dismissively. "A Short and Slightly Speculative History of Lavoisier's Wife" is another of the collection's funnier pieces, in which the influential chemist Antoine Lavoisier's wife is finally given her due as far more than the man's helpmeet. For example, "Lavoisier's wife, not to brag, but she spoke more languages than Lavoisier, and used to translate whole books into French just so he could read them." But even in the funny pieces, a thread of anger perseveres — anger at the injustices and indignities of women now and throughout the ages, anger for those women forgotten and ignored and silenced and mocked — so that the joke, as Sparks writes in this story, may be "referred to as whistling in the dark."

It's a terrible thing to pick favorites among so many stories full of vivid language, compelling imagery, sharp wit, and an abiding tenderness, and so I won't.

It's a terrible thing to pick favorites among so many stories full of vivid language, compelling imagery, sharp wit, and an abiding tenderness, and so I won't. But I have to highlight two more, and very different, stories that demonstrate Sparks's range. In "Everyone's a Winner at Meadow Park," the narrator is a teenager living in a trailer park with what remains of the family cobbled together by her late mother. "I'll bet you'd laugh your head off at the idea of a trailer park ghost," she tells us in the first paragraph, before sharply admonishing us: "Don't." The ghost girl haunting the narrator is a semi-constant companion, though she's not nearly as interesting as you'd think a ghost would be ("She's nice but omg she doesn't even remember her own name anymore, she's been dead so long.") and besides, the narrator has plenty else to worry about. Her best friend Jasmine, for example, a wealthy girl obsessed with horses, keeps getting broken — this is how the narrator thinks of Jasmine's depression--and men everywhere keep trying things they shouldn't. What's wonderful about "Everyone's a Winner," besides its constant plot surprises, is the narrator's voice, her ability to be both much more mature than she should need to be while also maintaining a very real and believable youth.