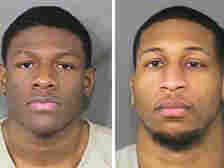 Two Ohio State University football players were arrested on rape and kidnapping charges Wednesday after what local police describe as a violent sexual encounter with a woman last week. The men are scheduled to be arraigned on first-degree felony charges Thursday.

Police charged 21-year-olds Amir Riep and Jahsen Wint, both of whom played on the Buckeyes' Big Ten Championship team this past season.

These allegations are potentially another blemish for one of the nation's elite college football programs, which routinely produces top NFL draft prospects.

In 2018, former Ohio State head football coach Urban Meyer announced he was retiring after a season that began with a three-game suspension for his handling of allegations of domestic abuse by a member of his coaching staff.

Current head coach Ryan Day announced that he had dismissed Riep and Wint from the football program. "I am not making any statement on the criminal charges," he said, "but it is clear they did not live up to our standards and my expectations. The athletics department will make sure they both continue to have access to the health and well-being resources available to students and student-athletes. Due to the ongoing criminal investigation, I will not be commenting further."

According to an affidavit filed by Columbus police detective Joshua Martin, the incident took place around 9:45 p.m. on Feb. 4 at an address roughly nine miles from Ohio State's campus.

According to the complaint, Riep was with a woman with whom he began to engage in consensual sex. But after an undisclosed amount of time, described in the affidavit as "brief," the women stated she did not want to continue.

At some point, the complaint says, Wint entered the room and Riep asked the woman if his teammate could join the two.

The criminal complaint alleges Riep grabbed the woman by the neck, forcing her to her hands and knees before raping her. As Riep pinned the woman in place, Wint forced oral sex upon her. The woman was able to temporarily fend off Wint, but he was able to force himself onto her again.

The affidavit continues, that "after several minutes both parties stopped," but Riep then demanded that the woman make a video recording saying that the encounter was consensual. He then drove her home.

Riep, a cornerback, and Wint, who played safety, were on the Buckeyes team that went undefeated in the Big Ten conference in 2019, winning a third-straight conference championship. The team lost in the college football playoff semifinal to Clemson, 29-23.

According to ESPN, both Riep and Wint are entering into their senior seasons at Ohio State. Riep appeared in 37 Buckeyes games, while Wint played in 35.

In the previous case, Meyer, the former head coach and current assistant athletics director for the university, fired Zach Smith, an assistant coach, in 2018. At the time, reports surfaced that Smith's ex-wife had been granted a domestic violence protection order against him. While acknowledging at the time he "should have done more" Meyer said he and his staff were unaware of any allegations of domestic abuse by Smith.

As NPR reported, an Ohio State inquiry found Meyer became aware of the domestic abuse allegations as early as 2015.

Another former OSU head coach, Jim Tressel, resigned in 2011 after being engulfed in a scandal involving several players who were accused of receiving improper gifts, selling championship rings or trading other memorabilia for cash and tattoos.

You can read the affidavit for Wint and Riep below.