Accessibility links
Judge Voids UNC's Controversial Settlement Over Confederate Statue 'Silent Sam' The judge overturned the university system's settlement with the Sons of Confederate Veterans, concluding that the group didn't have legal standing to bring a lawsuit in the first place. 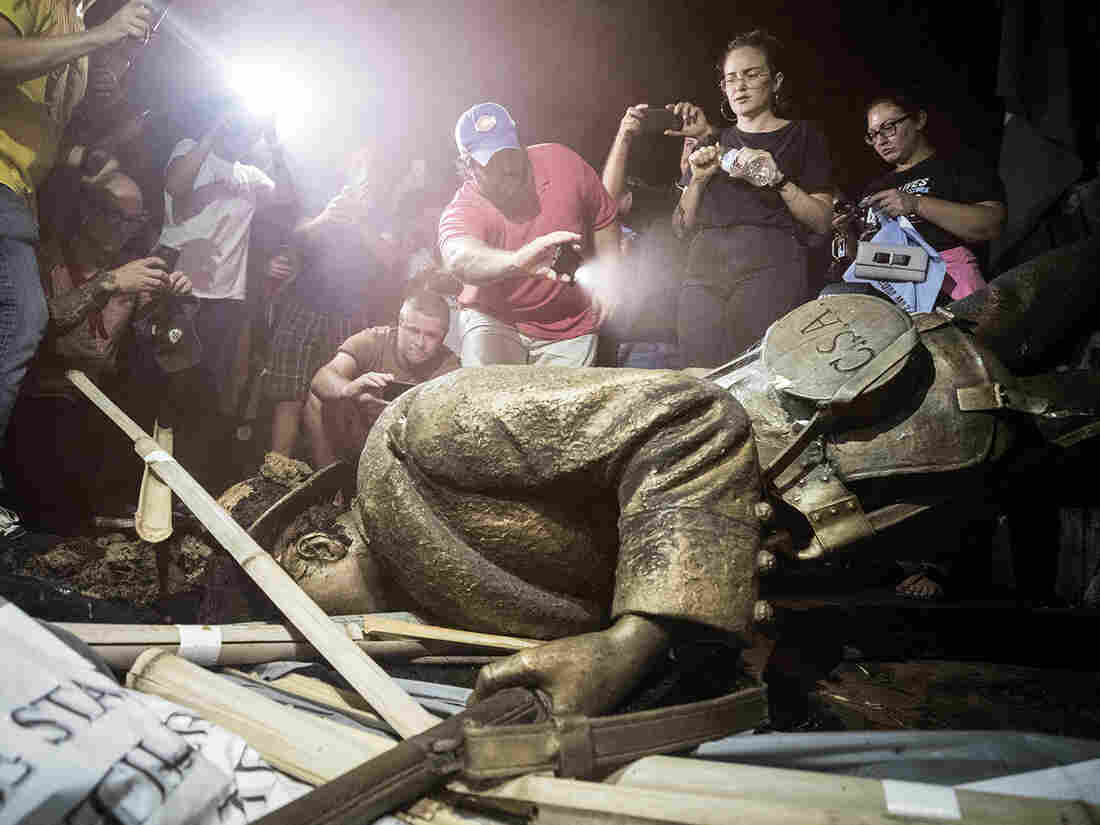 Demonstrators and spectators gather around the toppled Confederate statue known as Silent Sam in August 2018 at UNC-Chapel Hill in North Carolina. A judge has overturned a settlement that the UNC System made with the Sons of Confederate Veterans. Julia Wall/Raleigh News & Observer/Tribune News Service via Getty Images hide caption 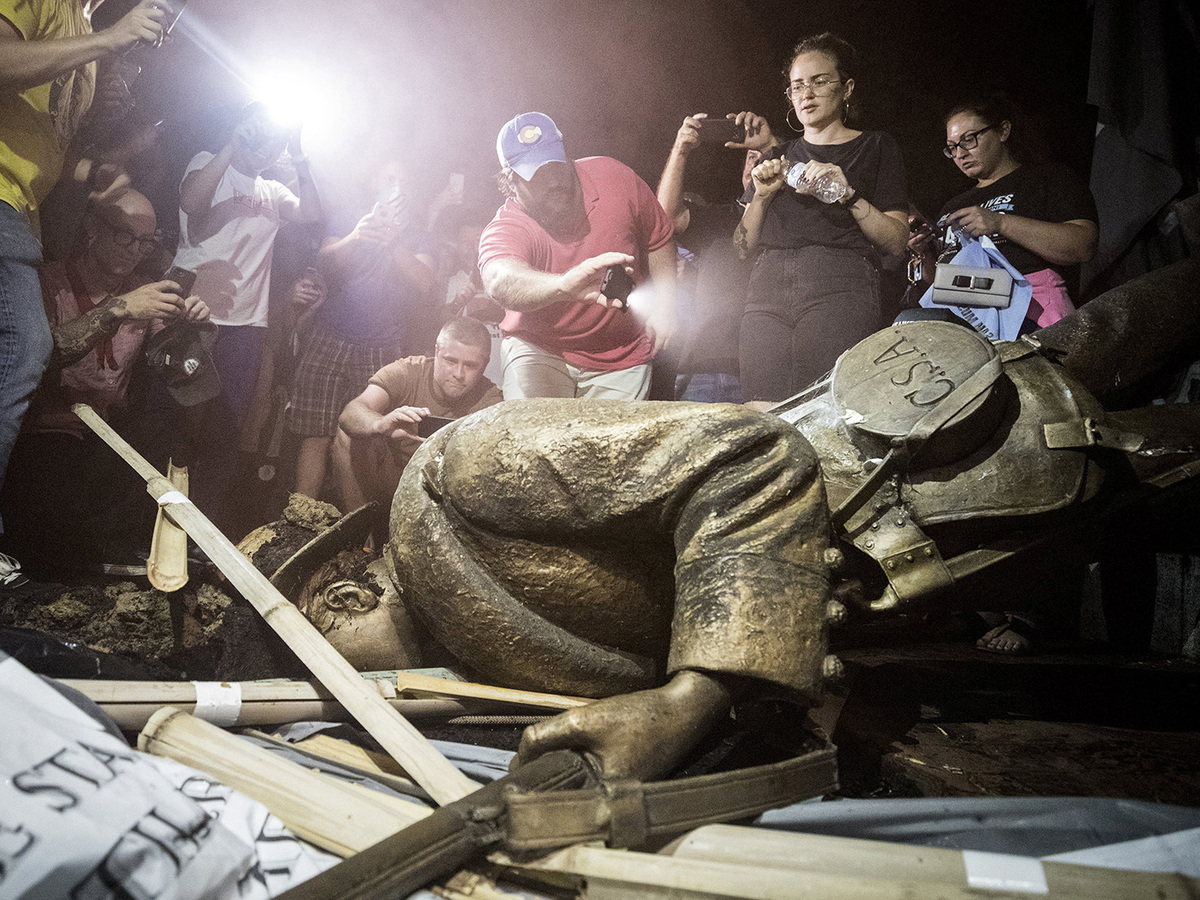 Demonstrators and spectators gather around the toppled Confederate statue known as Silent Sam in August 2018 at UNC-Chapel Hill in North Carolina. A judge has overturned a settlement that the UNC System made with the Sons of Confederate Veterans.

A judge has overturned a contentious settlement that the University of North Carolina system reached with the Sons of Confederate Veterans over the Confederate monument known as Silent Sam.

The November 2019 agreement required the UNC system to give Silent Sam to the Sons of Confederate Veterans, along with $2.5 million for its preservation and display. It was announced within minutes of a lawsuit filed by the group.

Orange County Superior Court Judge Allen Baddour — who originally signed off on that settlement — ruled Wednesday that the group lacked standing to bring its lawsuit in the first place.

The judge announced his decision at a hearing in Hillsborough, N.C., as five UNC students and a faculty member, represented by the Lawyers' Committee for Civil Rights Under Law, intervened to try to stop the settlement.

Silent Sam had stood in a prominent location on the campus of UNC-Chapel Hill for more than a hundred years. The Confederate monument was toppled by protesters in August 2018, amid a wave of similar actions across the country.

After Year Of Rising Tensions, Protesters Tear Down Confederate Statue On UNC Campus

After the statue came down, it was put into storage. The university system's board of governors gave no indication about what they planned to do with the monument before a sudden announcement that the system had reached a deal with the Sons of Confederate Veterans.

As NPR reported in December, "The university system insisted it was settling a lawsuit, but court records show the board of governors' chairman agreed to the deal before a lawsuit existed." Baddour signed off on the deal just seven minutes after the lawsuit was filed.

The UNC system's Board of Governors never held a public meeting to discuss options for what to do with the statue.

In December, Baddour ruled against a group of students who wanted to intervene in the case, but said he wanted to hear more about whether the CSV had standing and scheduled the hearing.

In Reckoning With Confederate Monuments, Other Countries Could Provide Examples

Ripley Rand, outside counsel representing the UNC System and the UNC Board of Governors, said Wednesday the ruling was not what the system had hoped for.

"The Board of Governors knew from the very beginning that this was a difficult but needed solution to meet all their goals to protect public safety of the University community, restore normality to campus, and be compliant with the Monuments Law," Rand said in a statement. "The Board of Governors will move forward with these three goals at the forefront and will go back to work to find a lasting and lawful solution to the dispute over the monument."

The statue was erected in 1913 by the United Daughters of the Confederacy and the university. It depicts a young Confederate soldier grasping a rifle; according to a university history, the soldier was dubbed "Silent Sam" because he lacks a cartridge box for ammunition. A project by two UNC historians details the statue's creation and its contested legacy, noting that protests against the statue date to the 1960s. The monument was one of many statues of Confederate figures and symbols erected in public spaces during the early 20th century.

Calls for the statue's removal grew stronger after the deadly white supremacist rally in Charlottesville, Va., in August 2017. University officials maintained that a state law designed to protect a "monument, memorial or work of art owned by the state" prevented them from taking down the divisive symbol.

After Silent Sam was felled, then-UNC Chancellor Carol Folt apologized for the university's history of slavery.

"I offer our university's deepest apology for the profound injustices of slavery, our full acknowledgment of the strength of enslaved peoples in the face of their suffering, and our respect and indebtedness to them," she said, as the university celebrated its 225th anniversary.

A few months later, Folt resigned — and at the same time, she ordered the removal of the pedestal on which Silent Sam had stood.