Accessibility links
CBP Chief Admits Officers 'Overzealous'; Critics Say Iranians And Others Targeted The head of CBP says the Seattle field office was "corrected" after it questioned hundreds of Iranian-American citizens at a border crossing. But advocates fear this wasn't an isolated mistake. 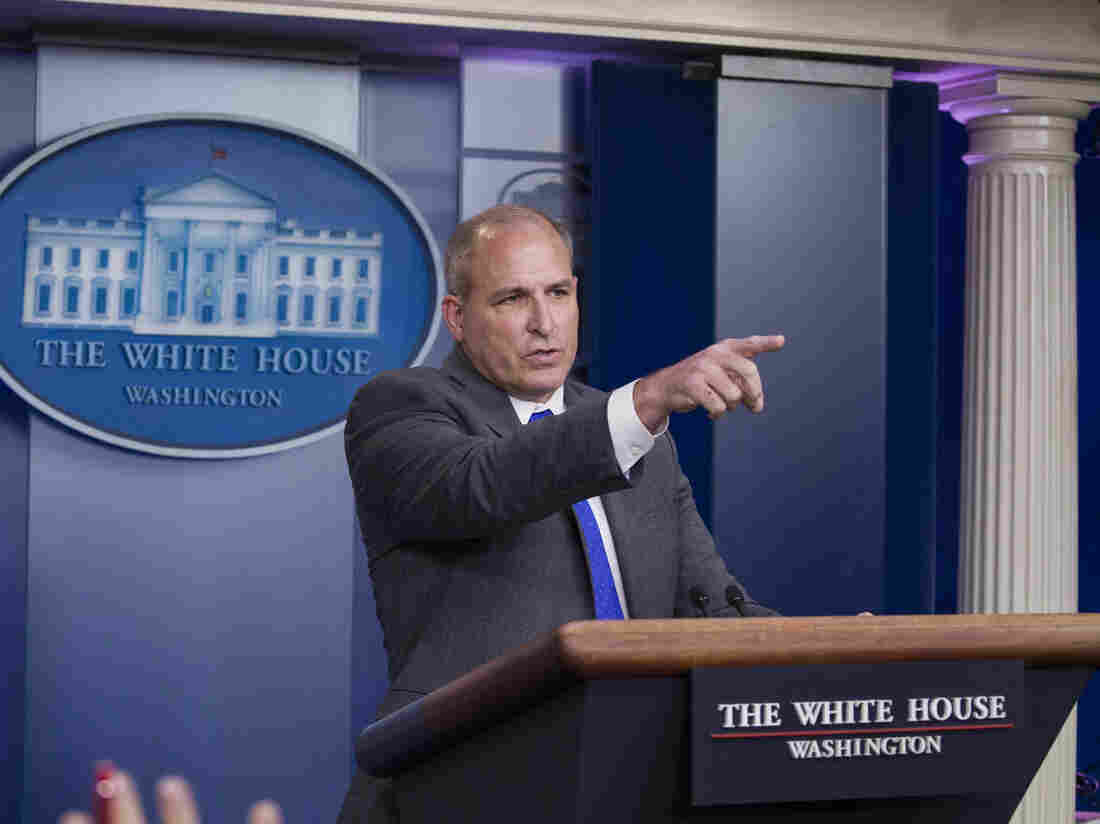 Acting Customs and Border Protection director Mark Morgan speaks with reporters in the briefing room at the White House, on Nov. 14, 2019.

The head of U.S. Customs and Border Protection made a surprising admission this week about the agency's Seattle field office.

Last month, officers at a border crossing there pulled aside hundreds of Iranian-Americans — including U.S citizens and green card holders — and held them for hours.

"In that specific office," acting CBP commissioner Mark Morgan said at a briefing with reporters in Washington, "leadership just got a little overzealous."

At the time, tensions with Iran were rising after the U.S. air strike that killed a top Iranian general. And field offices had been told to be vigilant. But Morgan says they were not instructed to hold and question everyone from Iran.

"That was not in line with our direction. And so that was immediately corrected," Morgan said. "And it was very unique to that one sector."

But immigrant advocates say this was not an isolated mistake.

Across the country, they say, Customs and Border Protection officers are targeting travelers for extra scrutiny — particularly travelers from Iran and the Middle East, many coming here for school.

Lawyer For Iranian Students Deported From U.S. Describes Their Plight

Lawyer For Iranian Students Deported From U.S. Describes Their Plight

Students from Iran and Lebanon headed to Harvard University, a doctorate student from Iran starting at Michigan State University, and other international graduate students landing in Chicago, Atlanta and Los Angeles have all been questioned and turned away at U.S. airports in recent months.

There are nearly 20 documented cases of Iranian students who have been rejected at U.S. airports, including a young woman named Reihana. She was planning to start a new chapter in her life as a student at Harvard Divinity School. But never made it out of Boston Logan International Airport.

"When I got deported, I lost everything that I planned for," said Reihana, who asked us not to use her last name because she's still fighting to get into the U.S.

Reihana had been vetted by U.S. authorities to get a student visa. But when she landed at Boston's Logan International Airport in September, she says she was put in a room and questioned for hours by CBP officers, who asked repeatedly how she felt about the Middle East and the government of Iran.

"It was very difficult. I didn't understand, what does this have to do with the Iranian government?" she asked. "I was a student, not a representative of any government."

Reihana asked to talk to a lawyer. But she says the officers wouldn't let her. They sent her back to Tehran, and barred her from returning to the U.S. for five years.

"In a few hours, an officer has the power to ignore all the months of vetting on your case," she said. "And just make another decision, based on my nationality and you know, discrimination."

Reihana has a lawyer now. She's filed a formal complaint with CBP, and is suing in federal court. She still wants to go to Harvard, and also to hold the officers who rejected her accountable.

CBP insists it does not target people based on nationality.

So how could this happen? Ronald Vitiello, who served as the deputy commissioner of CBP under President Trump, says officers have broad discretion, and a mandate to keep America safe.

"They're looking for threats to the country. They want to make sure that the people are who they say they are," Vitiello said.

But Vitiello says CBP officers can't just pull aside travelers based on the color of their skin, or their country of origin. They have to have something more to base their suspicion on, much like police when they stop suspects on the street.

"They can't deny people just because they happen to be affiliated in some way with Iran," Vitiello said. "There has to be some justification for the decisions that they make."

These officers should do more than just stamp passports, says Gil Kerlikowske, who served as commissioner of CBP under President Obama.

"They're not merely automatons that look at someone and stamp the record," Kerlikowske said. "We ask them to take additional steps to make sure the people entering into the country — and it's a million passengers a day — are not going to cause harm."

But there's a lot we still don't know about why Iranians and others have been turned away.

For instance, there are still unanswered questions about a group of specially-trained CBP officers known as known as Tactical Terrorism Response Teams, or TTRT.

"We don't know much about them because the government has not provided much information to the public about how they operate," said Scarlet Kim, a lawyer with the American Civil Liberties Union, which is suing to find out more about the TTRT program. "But what we do know raises a lot of red flags."

What we know is that these teams operate at more than 40 major airports and border crossings around the country. In a single year, they refused entry to 1,400 people, according to congressional testimony in 2017. And according to a leaked memo, they were working with the Seattle Field Office when hundreds of Iranian Americans were held recently.

But most alarming for the ACLU is this: In an interview in 2018, former CBP commissioner Kevin McAleenan said that these officers can stop any traveler — even those who don't present a known security risk. Instead, these officers can rely on their "instincts."

The ACLU's Scarlet Kim says that's a recipe for ethnic and racial profiling.

"Instinct suggests that officers can essentially rely on any kind of hunch that they might have about an individual," Kim said. "And that hunch can rest on an implicit or explicit bias."

But Kim says there's no way to know for sure if these teams are doing anything wrong without better public oversight — unless CBP is again forced to admit that its officers were "overzealous."