Accessibility links
Review: 'Ordinary Love' Is 'Imperfect But Affecting' Lesley Manville and Liam Neeson bring a wry, lived-in tenderness to this "imperfect but affecting" tale of a long-married couple facing cancer together. 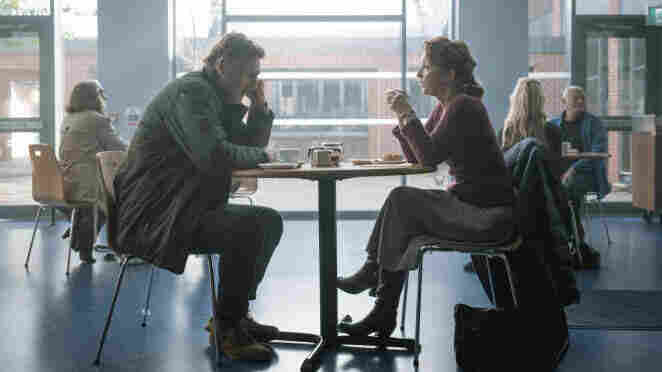 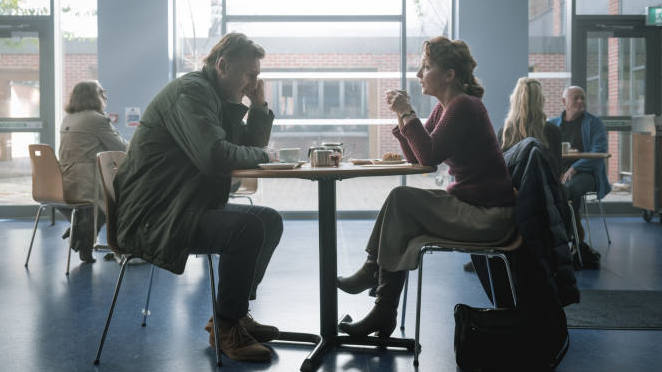 He has a very particular set of coping skills: Tom (Liam Neeson) and Joan (Lesley Manville) face her cancer diagnosis together in Ordinary Love.

My first time around with Ordinary Love, I saw two great actors doing their damnedest to breathe life into a pedestrian cancer weepie. I watched it again and saw two great actors bringing grace and depth to an imperfect but affecting chamber piece that takes it for granted that we can handle a de-sanitized drama about a long-married couple doing their best to cope with life-threatening illness. The film is not especially graphic, but unlike most others of its kind, this one trusts us to stick with the slew of treatments that often hurt more than the disease. In its cheekily Irish way it offers a portrait of a great and enduring love under acute pressure.

Ordinary Love, which is directed by Lisa Barros D'Sa and Glenn Leyburn ( who also made Good Vibrations, a 2013 movie set in Ireland's punk music scene), tracks a traumatic year in the life of retired couple Joan (Lesley Manville) and Tom (Liam Neeson) after Joan is diagnosed with breast cancer. The quiet flow of their days before she got sick — daily power-walks on a peaceful Irish shoreline, amiable squabbling at the supermarket over what doesn't need to go in the shopping cart — is rudely displaced by a staccato new normal of hospital stays colored in chilly blues, punctuated by returns to the murky browns of a cozy home now silent and stained with misery. There the camera directs us to a photograph that signals another unspeakable loss that the couple sustained long before Joan was diagnosed.

Lesley Manville from 'Mum,' 'Another Year,' and more

Here and there a few secondary characters appear, notably Tom and Joan's daughter former teacher (a very good David Wilmot), a gentle gay man who, unlike Joan, knows exactly where his disease is going and struggles valiantly to protect his vulnerable young husband (Amit Shah).

Mostly, though, the film is an actors' two-hander, and it's great to see Neeson do muted justice to a role that doesn't require him to whack everyone in sight. Grizzled and bewildered, Tom strains to play the measured optimist to his wife's quietly growing fear of the worst. Neeson comfortably plays second fiddle to Manville, a wonderfully elastic actress who was superb as Daniel Day-Lewis's icy, Mrs.-Danvers-like manager in Paul Thomas Anderson's 2018 Phantom Thread. She was sly as a fox as a preternaturally long-suffering mother of nominally grown nutballs in the recent television series Mum. Sturdy, ironic and practical, Manville's Joan in Ordinary Love is the inverse of her lonely, self-pitying alcoholic in Mike Leigh's Another Year, a crude and cruelly written role that she performed with devotion, but did her prodigious gifts no credit. Here she moves up and down the emotional scale without a moment's excess, registering Joan's mounting panic through her eyes and an occasional flutter of her fingers.

Written by Northern Irish playwright Owen McCafferty, whose wife went through breast cancer treatment, the script is wry and witty, if occasionally slipping into TV-movie-speak with glib musings about how we're alone together or how important it is to spend time with loved ones because we're all going to die, we just don't know when. McCafferty steps a bit hard on the mostly amiable fraternal banter that operates as the loving shorthand of many a long and happy marriage. Their squabbling might be all we have to go on verbally; Manville and Neeson flesh out these two sharply contrasting halves into a finely orchestrated, improbably compatible whole built on expressive silences.

As she trudges through the increasingly invasive treatments, Joan expresses her fears of the worst while Tom strives to be upbeat. In the face of terrifying uncertainty, the two play out a see-saw of feelings that holds them precariously in balance. Until, that is, the cathartic moment when the dam breaks and they fling recriminations that might break a union built on less solid foundations. Bravely and perhaps quixotically timed to release on Valentine's Day, this modest little drama boasts no saints, only the profound heroism of hanging in.