Accessibility links
'All Fires Are Now Contained': Australia's New South Wales Celebrates One of the most stubborn fires to be declared out this week was a 2,000-acre beast that had been burning since July. 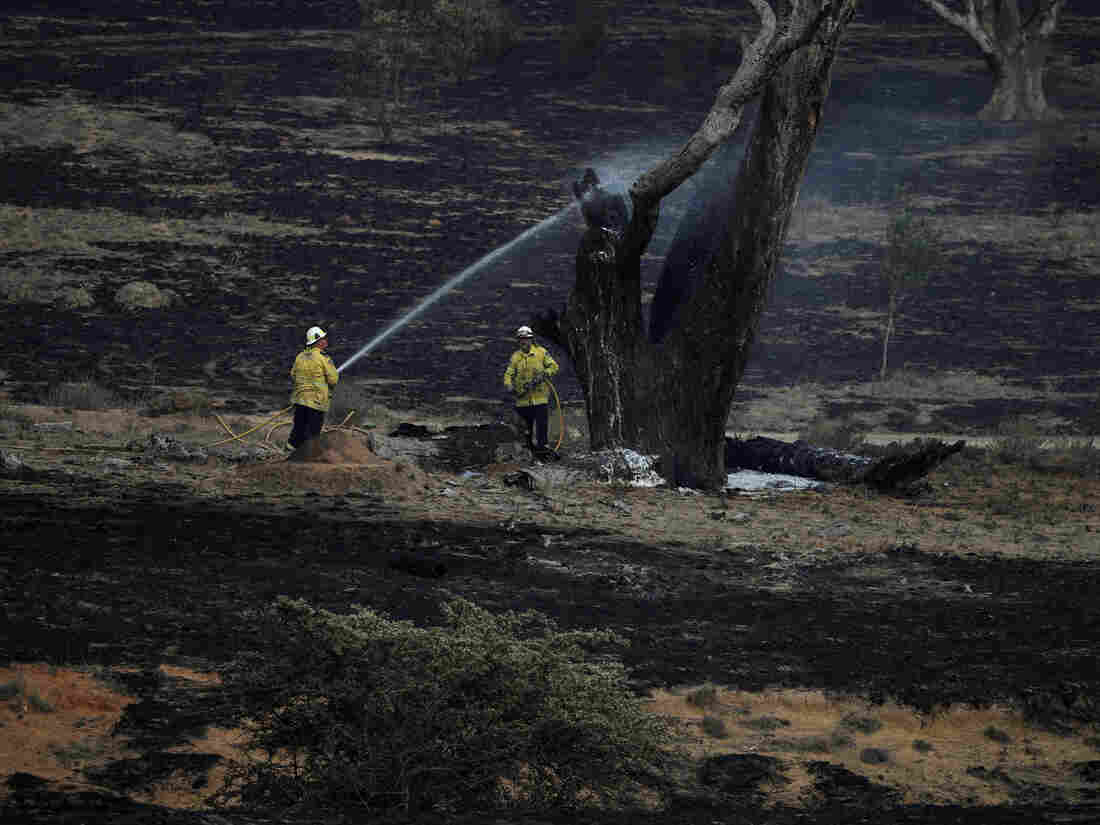 Firefighters spray water on a smoldering tree in the wake of a bushfire near Bumbalong in New South Wales, Australia. February has brought much-needed rain to the state, where fires have burned about 13.3 million acres of land. Loren Elliott/Reuters hide caption 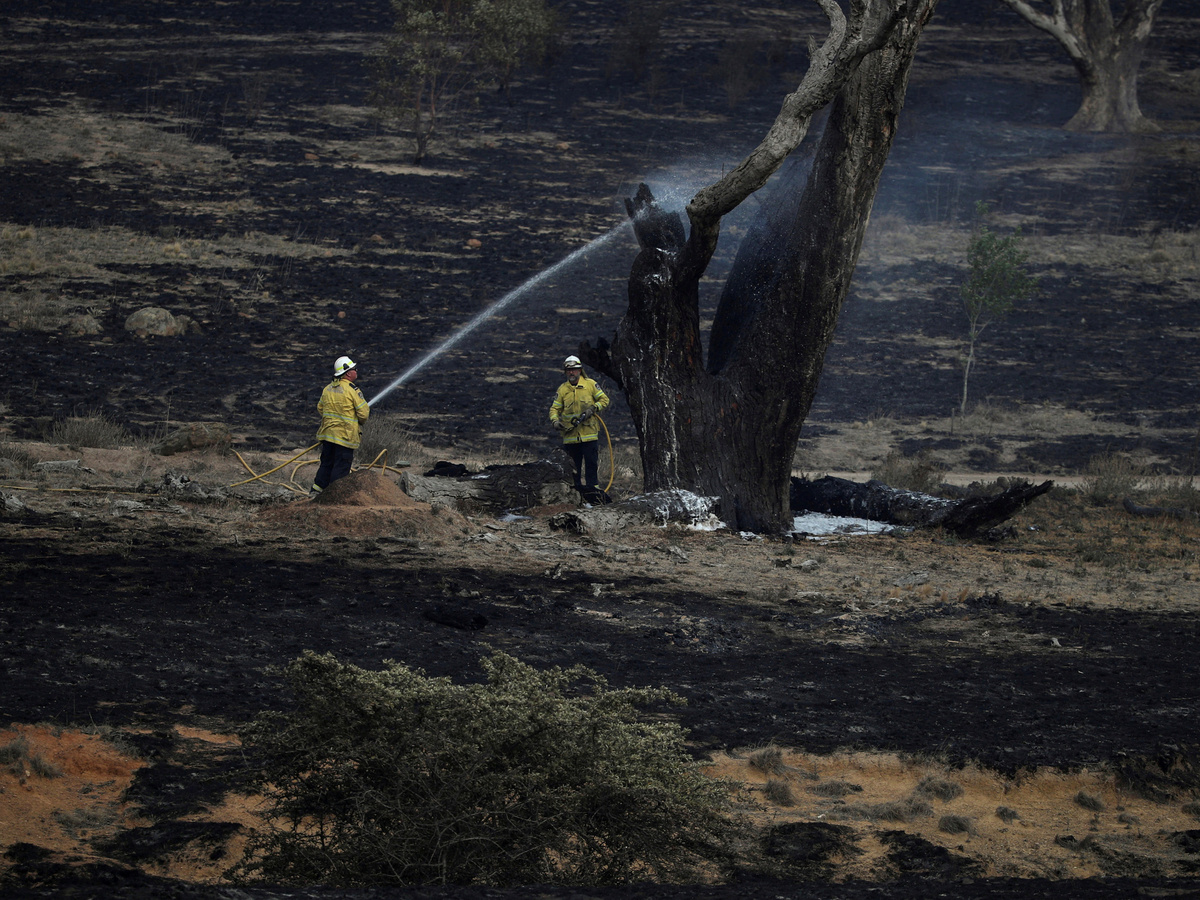 Firefighters spray water on a smoldering tree in the wake of a bushfire near Bumbalong in New South Wales, Australia. February has brought much-needed rain to the state, where fires have burned about 13.3 million acres of land.

Fire officials in Australia are celebrating a landmark moment, saying that for the first time in what has been a horrendous wildfire season, every fire in hard-hit New South Wales is now under control. Bushfires have destroyed more than 2,400 homes and burned 5.4 million hectares of land – or about 13.3 million acres — in the country's most populous state.

More than a week of heavy rain has helped fire crews extinguish or control dangerous fires. And while the deluge has created its own problems, such as flooding and mudslides, firefighters welcomed the news that they finally have the upper hand in combating fires and can focus on the recovery process.

"After what's been a truly devastating fire season for both firefighters and residents who suffered through so much this season, all fires are now contained in New South Wales, which is great news," NSW Rural Fire Service Deputy Commissioner Rob Rogers said in a video update Thursday.

In what has been a very traumatic, exhausting and anxious bush fire season so far, for the first time this season all bush and grass fires in NSW are now contained.
It has taken a lot of work by firefighters, emergency services and communities to get to this point. #nswrfs pic.twitter.com/RhqmcYhJ1j

"Not all fires are out," Rogers added, noting that some fires are burning in the state's far south. "But all fires are contained, so we can really focus on helping people rebuild."

In addition to the thousands of homes destroyed, an additional 1,024 were damaged during the record-shattering bushfire season that brought 11,264 bush and grass fires, according to the NSW fire agency.

One of the most stubborn fires declared out this week was the Lindfield Park Road Fire — a 2,000-acre beast that ripped through the Port Macquarie region. After igniting last July, the fire lasted for 210 days, in part by burning nearly 1,000 acres of under-surface peat soils, the NSW Rural Fire Service says.

"Months of drought, searing heat and flames have given way to torrents of rain along much of eastern Australia in the last week," NPR's Nathan Rott reports from Bateman's Bay, Australia. He adds, "Flooding and mudslides have been reported in Queensland and New South Wales."

The sustained rain has given new hope to areas scorched by flame. The park service in the southern state of Victoria tweeted striking images this week of vibrant green shoots of new leaves and stems springing up in landscapes still dominated by blackened trees and plants.

Green shoots provide hope. Parks across East Gippsland and North East Victoria have been seriously affected by fire. While fire is still an issue, mother nature is already slowly starting to regenerate in some areas. pic.twitter.com/WMLPhnIxal

"While fire is still an issue, mother nature is already slowly starting to regenerate in some areas," the agency said.

Fire officials had welcomed the shift in weather from dry and windy conditions to rain – but emergency officials were quickly forced to reconfigure their operations to handle flood-related emergencies, including swift water rescues, after heavy rains began last week. In one 24-hour period, the NSW State Emergency Service fielded about 2,500 calls for help because of the rain.

The rains have also been a boon for dams in the region, which have seen their levels fall dramatically during months of dry weather. The water agency in New South Wales says the water storage for the greater Sydney area stands at 75.1% — an increase of 33.4% since last Thursday, when storage was just under 42%.

However, Australia's Bureau of Meteorology is warning of the potential for "major flooding" in parts of New South Wales and other areas on Friday. And in Victoria, which includes Melbourne, the State Emergency Service warns that a "large storm is predicted to hit central parts" of the state by Friday afternoon.